Terminal 2 shuts its doors at the end of this month for a year and a half. What do we lose during this period?

So, Changi Terminal 2 will be suspending operations for 18 months from 1 May 2020, in order to consolidate traffic and expedite renovations amidst the Covid-19 downturn.

This marks the first time in the airport’s history that a terminal has been completely shut down- even during previous renovations, terminals continued operating with work done in sections.

There’s no doubt a lot to look forward to in the new-and-improved Terminal 2. More greenery, larger check-in areas, an upgraded luggage system, and new F&B offerings are just some of the enhancements promised. With the temporary suspension of operations, it’s possible we’ll see the renovations completed as early as 2023.

In the meantime, however, we’ll have to say goodbye to the following shops and F&B outlets, which only operate out of Terminal 2.

Changi Airport Group hasn’t provided details about what will happen to these merchants, beyond the fact it’s “in discussions with airport partners and concessionaires in T2 regarding options available to them”. For all we know it might be a blessing in disguise for some, who get an easy out of their rental contracts at a location that must be bleeding cash right now.

I’m not overly concerned losing most of these outlets, insofar as the inability to buy Garrett Popcorn at the airport won’t keep me up at night. However, there are a few things I’m really going to miss about Terminal 2 when the doors close at the end of this month.

(1) The therapeutic flipping of the departures board

Terminal 2 is the only terminal at Changi to have an analogue flip board display, which was installed all the way back in 1999. Also known as a Solari Board (after display manufacturer Solari di Udine), it’s a little throwback to the golden age of travel.

Each board is made up of more than 2,000 individual modules, and which spin at a pace of five flaps per second, creating the iconic clacking sound. Alas, they’re much quieter these days…

Unfortunately, the manufacturer stopped producing spare parts in 2015, and since then the boards have been living on borrowed time. There used to be two of these in Terminal 2- one between rows 9 and 10 and the other between rows 3 and 4. The former was removed in February and donated to the National Heritage Board, and the latter is scheduled to be retired within two years.

Given how long Terminal 2 will be closed, however, we can’t rule out the possibility that the board disappears during that time. Changi has at least promised that the last board will go on permanent display elsewhere in the airport, but I do hope she gets a proper public send-off, perhaps when Terminal 2 resumes operations.

(2) Getting a free set meal at TGM

TGM may not be an airport lounge in the traditional sense of the word, but it was always my first stop when flying out of Terminal 2.

Priority Pass cardholders could redeem a free set meal, which while not haute cuisine, was still better than the offerings at the nearby SilverKris lounge.

The food was made to order, and the staff didn’t mind if you ordered for takeaway either. You could even use your free guest allowance (on credit cards that had it) to get two meals if you were really hungry. There was no free booze, but I always viewed it as a pitstop- a proper meal at TGM, then champagne at the SilverKris lounge.

Best of all, TGM was part of the Arrture loyalty program, so you could earn points just by visiting (and maybe redeem them for a Plaza Premium First pass).

I really hope TGM finds an alternative space to operate in the meantime, but I just don’t see them relocating for an 18-month period.

(3) Plane spotting from the Sunflower Garden

Terminal 2 may not have as many attractions as some of the newer terminals, but hidden away on the roof is a sunflower garden, quite possibly the only one in the world with a view of a tarmac.

This garden features more than 500 sunflowers, grown in Changi’s very own nursery (they keep a horticulturalist on staff). The tallest ones can reach almost 1.5 meters high, and 15cm wide. At night, they turn on special lighting to simulate fireflies- it’s a bit kitsch, but cute nonetheless.

More importantly for avgeeks, the garden is a great place for plane spotting as it overlooks the F gates.

One unique feature about Terminal 2 is the Entertainment Deck, where you’d find Xbox 360 and PS3 consoles with various pick-me-up titles like FIFA and Call of Duty. Yes, it wasn’t the latest gen stuff, but it still did the trick. I don’t think a whole lot of due diligence went into the curation of content though, because I distinctly remember COD MW2 (and its infamous No Russian mission) being available.

Casual gamers could partake in lesser pursuits (yes, I’m a gaming snob) like Kinect, and there was even a LAN gaming cafe. Yes, an actual LAN gaming cafe, in an airport. It was often overrun with annoying screaming teenagers, but there was one time I got the whole place to myself and had a nice game of CS with bots. That pretty much summed up my social life.

I’m sure many kids (and their parents) will lament the loss of the Entertainment Deck when Terminal 2 closes. Terminal 4 does have an Entertainment Corner, but it’s a scaled down version lacking the PS3s or LAN gaming facilities, plus it’s not exactly accessible if you’re flying out from Terminals 1-3.

(5) Getting serious nostalgia feels at Swensen’s 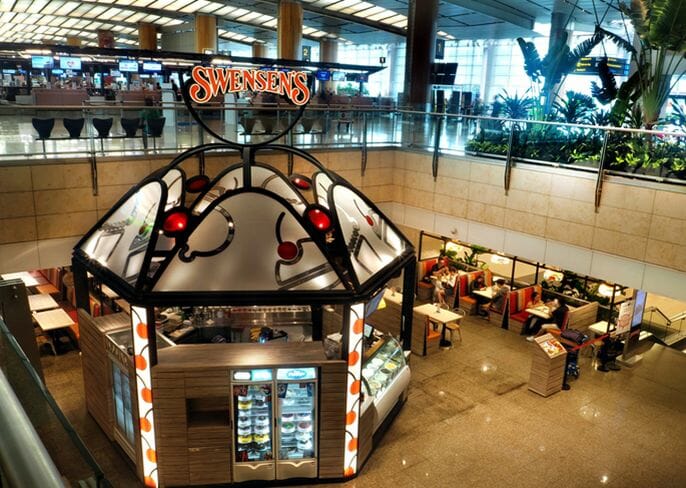 Say what you will about the gourmet excellence of Swensen’s, but you can’t deny that it’s a Changi Airport institution.

At least the original one in Terminal 1 was. When it opened along with Terminal 1 in 1981, it was said to be the world’s largest Swensen’s, boasting a 70-m long counter and up to 60 flavors of ice cream each day. Keep in mind that in the 1980s, this was as good as Western food got in Singapore.

At some point, the Terminal 1 outlet was closed and relocated to Terminal 2, where it now sits on a mezzanine level just a few steps up from the arrivals area on Level 1.

Although my ice cream tastes have since graduated beyond Swensen’s, I’ll always have fond memories of the outlet at Changi. In my younger and more impressionable years, I declared it to be the pinnacle of ice cream perfection, and always relished going there with my parents before or after a flight. It gave me extra incentive to behave on the plane, if nothing else.

Yes, I know you can still find Swensen’s elsewhere, but it’s just not the same.

In the cold light of day, closing Terminal 2 makes perfect sense. Air traffic has slowed to the point where a single terminal could more than accommodate all of Changi’s daily flights, and there’s just no logic in keeping the lights on when we could be driving ahead with some much-needed renovations.

That said, the oldest terminal at Changi still has a few unique tricks up its sleeve, which we’ll now lose for the foreseeable future.

Do you have any other memories of Terminal 2 to share?

I will miss the staff canteen at T2. There used to be a really good Western food stall called Wild Olives that I would make a special trek to the airport just to eat (I live in Jurong West, so that’s a huge journey). They moved to Pasir Ris Hawker Center a few years back though. Still, T2 staff canteen is the best staff canteen at Changi IMO.

ah yes, the staff canteen. i wonder if they’ll keep the t2 one open to support the hawkers, and also because t3 doesn’t have one anyway

it will remain open

Wild Olives moved permanently to Pasir Ris Hawker Centre. If you make a special trek to Changi, I think you will not mind to go to Pasir Ris 😉

I missed the McDonald’s already! It was the biggest fast food in the airport, I guess. I feel the overall look of T2 is quite old.

ah thanks! I finally know where they moved to.

Best thing about TGM: They accept your PriorityPass upon arrival. Hence for me – especially when arriving in the evening – that was usually my last stop ordering a bento box for takeaway 🙂 Hope they find a new home in one of the other terminals.

If you miss Terminal 2, you can walk it virtually using my video : https://www.youtube.com/watch?v=DrbdcG6OEoQ

been working in T2 for almost 10yrs. sad to see it’s closing, literally, portion by portion.

this link above shows you which facilities are closing.

A bit unrelated, but i miss the T1 fountains back in the day… the old school fountains from the bottom all the way up.. Now i wish i can see a picture of that