What’s the best credit card to use for charitable donations?

Giving can be rewarding too. Earn more miles when you give with the right cards, on the right platforms.

One bright spark during this Covid-19 pandemic has been the willingness of folks to open their hearts and wallets to the less fortunate.

Giving.sg saw a surge in donations last month as thousands donated their $600 Solidarity payment to various #SGUnited initiatives, and many more continue to volunteer their time and energy to relief efforts for migrant workers and the vulnerable.

If you’re privileged enough to be in a position to give, there’s no need to feel ashamed asking which credit cards earn points in the process.

After all, the National Volunteer and Philantrophy Centre (which runs Giving.sg) is waiving its usual 3% transaction fee all the way till March 2021, so your chosen cause still receives the full donation. Anyway, from the charity’s point of view, receiving $100 less a credit card fee is better than no donation at all.

What MCC do charitable donations process under?

The MCC will be different depending on the type of organization you’re donating to. The two you’re most likely to encounter are:

Organizations using these MCCs receive preferential interchange rates (the fee charged for accepting credit cards). This helps them save on transaction costs, but also means there’s a smaller pie to split among all the parties involved, including the card-issuing bank.

Consequently, the profit margins on these transactions are much smaller, and banks tend to exclude them from rewards.

What cards earn points/miles on donations to charity?

That said, not every bank excludes donations. Here’s what I’ve pulled together from the assorted T&Cs.

I’d urge some caution with HSBC, Maybank, and Standard Chartered. I couldn’t find anything in their T&Cs which excludes donations from earning points, but I haven’t tested them personally. I have seen a few scattered data points that these cards do receive rewards (so long as you don’t set up your donations as recurring transactions), but do sound out in the comments below if you’ve got more experience.

What I have tested personally are the American Express cards, so if you don’t fancy rolling the dice, the following cards are guaranteed to get you points.

You can always verify this in the points breakdown section of your online banking:

In case there was any doubt, donations also qualify for the 2X points promotion that American Express is running on the AMEX Platinum Charge card until 20 July 2020.

Some of you may be thinking of doing the Citi Rewards-GrabPay workaround, where a GrabPay balance is topped up with a Citi Rewards Visa for 4 mpd, then spent through the GrabPay Mastercard. This doesn’t work for Giving.sg and Ray of Hope (both portals reject transactions made with the GrabPay Mastercard), but might be an option for other organizations. Some charities even accept GrabPay or FavePay,  so be sure to explore that too.

Do note that being charged in FCY does not override existing rewards exclusions. For example, giving to a foreign charity with your OCBC 90N will not earn you the 2.1 mpd usually received for overseas spending, because of the MCC.

Just because donations don’t earn points doesn’t mean the spending has to be “wasted”- it can still count towards reaching a sign-up bonus.

For example, donations counted towards the S$6,000 threshold for last year’s Standard Chartered X Card sign up bonus. SCB even explicitly confirmed this in an FAQ:

Q: Are transactions made at charitable organisations considered eligible spend to accumulate towards the $6,000 spend for the Air Miles promotion?

A: Transactions made at charitable organisations are eligible spend.

I previously worked with Citibank on a post for the Citi PremierMiles card, and confirmed with them that donations will not earn base points, but will count towards the S$9,000 spending threshold.

Beyond that, it’s less clear. I’ve read that transactions which don’t earn points on DBS cards still count towards the minimum spending required for the various Spend and Redeem promotions on the DBS Lifestyle app, so it would stand to reason that charitable donations would also work here. However, that’s purely speculation on my part.

Lazada’s donation platform represents a potentially interesting workaround. Shoppers can use this to send donations to the Community Chest and the Singapore Children’s Society, with 100% of the proceeds going to the beneficiary. 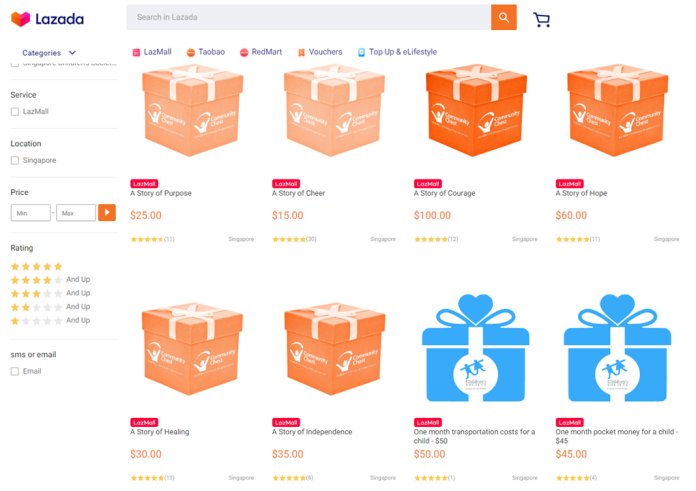 Do note that Community Chest donations made via Lazada will not be eligible for tax deductions. For the Singapore Children’s Society, donors can write in to [email protected] to claim a deduction.

This is potentially intriguing, because it means you could earn up to 8 mpd on your donations with the OCBC Titanium Rewards and Citi Rewards cards, plus get a tax deduction (in the case of the Singapore Children’s Society). That assumes Lazada will process these transactions under its own MCC, but I see no reason why it shouldn’t.

Although most banks don’t award points on donations, there are many ways of working around the exclusions- sometimes it just needs a little out of the box thinking.  So continue giving to the extent you can, and let that be all the more rewarding for you!

Aaron Wong
Aaron founded The Milelion with the intention of helping people travel better for less and impressing chiobu. He was 50% successful.
Previous articleBuy gift cards for independent hotels with 50% bonus (plus indemnity)
Next articleNow live: Get up to $300 upon approval for the UOB PRVI Miles AMEX

Apply for a Standard Chartered credit card via SingSaver and get a Nespresso coffee machine upon approval.
Read more

I can confirm a plain vanilla donation on http://www.giving.sg does not get points for Citi Premiermiles card. Donated last month

thank you for the confirmation

Works for Maybank F&F card too

thanks for the data point!

Hi, has anyone tried and confirmed the Lazada workaround with the OCBC Titanium and Citi Rewards cards?

I just made a donation to giving.sg via grabpay mastercard. It went through and I earned points for it. I’m not sure if it worked because I already had the money in my grabpay wallet (did not need to pull from a card).