The American Express KrisFlyer cobrand credit cards may not have the highest miles earning rates on the market, but they do have some of the best sign-up bonuses.

The last round of bonuses lapsed on 30 June, and AMEX has announced a new set valid for approvals between 1 July and 30 September 2020. 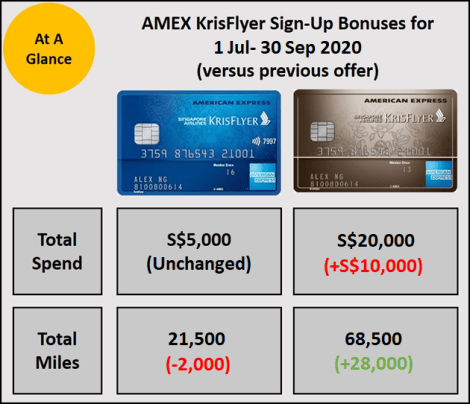 Unfortunately, both cards now have slightly worse MGM bonuses, due to AMEX’s decision to devalue the program in early June.

Read on for the full details.

Apply for the KrisFlyer Credit Card and get 3K bonus miles

The sign-up bonus for the AMEX KrisFlyer Credit Card remains the same. However, the total miles received is lower, due to the weakened MGM offer.

Apply for the KrisFlyer Ascend Card and get a bonus 7.5K miles

For the AMEX KrisFlyer Ascend, cardholders now have the option of spending a further S$10,000 in months 4-6 for a further 16,000 miles. This is only available to new-to-card AMEX cardholders, i.e those who don’t hold a principal American Express card at the time of application.

Which transactions are eligible?

As per AMEX’s master list of exclusions, the following transactions will not count towards your sign-up bonus spending.

Do note in particular the exclusions for insurance, SPC and GrabPay transactions, which took effect from 1 March 2020. However, charity, hospital, education and utilities payments continue to earn miles, assuming AMEX cards are accepted.

The AMEX KrisFlyer Credit Card is AMEX’s entry level offering, and doesn’t have any frills to speak of apart from its first year fee waiver.

The AMEX KrisFlyer Ascend, on the other hand, comes with four complimentary lounge passes, Hilton Silver status (great if you’re planning to buy points as you get the 5th night free on redemptions), a complimentary night at selected Hilton properties, and a fast track to KrisFlyer Elite Gold. To enjoy these benefits, you’ll need to pay the S$337.05 annual fee.

If you have big ticket spending coming up in the next 6 months, the AMEX KrisFlyer Ascend’s sign-up bonus is worth considering. Do note that you’ll have to pay the non-waivable S$337.05 annual fee, however.

For a full list of all the sign up bonuses currently on the market, refer to our guide here.

Just received an email from CardUp with their “Exclusive Offer” for signing up to Amex cards (KF, KF Ascend, PPS, Solitaire PPS, Platinum). Less KF miles compared to the one above, but requires only $500 spending in first month.

refer to this post: they have cut the spending requirement- https://milelion.com/2020/08/03/amex-enhances-sign-up-bonuses-for-krisflyer-and-platinum-credit-cards/