The AMEX KrisFlyer Ascend packs a free hotel night and lounge visits, but can that make up for its ho-hum earning rates?

With direct crediting of miles, lounge access and a free hotel night every year, there’s certainly a few things going for it. On the other hand, it’s got a steep annual fee, and miles earning rates that aren’t exactly earth-shattering.

So is this the card for you?

Let’s start this review by looking at the key features of the AMEX KrisFlyer Ascend Card.

Remember that there are four other Singapore Airlines cobrand cards- we’ll cover the others in separate articles:

How much must I earn to qualify for an AMEX KrisFlyer Ascend?

The AMEX KrisFlyer Ascend occupies a bit of a strange spot when it comes to income requirements. At S$50,000 per year, it’s not exactly entry-level, nor is it within the ballpark of S$120,000 mass affluent cards.

I’ve made the point that any income requirement above S$30,000 is entirely arbitrary, but American Express does tend to be stricter with enforcement than other card issuers. I’ve heard of people getting approved with incomes S$3-4,000 shy of the mark, but otherwise you may have problems.

If you’re dead set on getting this card but don’t meet the income requirement, American Express offers an “upgrade path”.

Holders of the entry-level AMEX KrisFlyer Credit Card who have held the card for at least 9 months and spend at least S$10,000 within 12 consecutive calendar months can opt to upgrade to an AMEX KrisFlyer Ascend. AMEX will throw in 12,000 bonus miles too, when the annual fee is paid.

How much is the AMEX KrisFlyer Ascend’s annual fee?

Unlike other card issuers, American Express is very strict about fee waivers. Unless you’ve spent a substantial amount over the past year, or hold a high-tier card like the AMEX Platinum Charge or AMEX Centurion, it’s highly unlikely you can get the AMEX KrisFlyer Ascend’s annual fee waived.

Should the fee be waived, however, you generally won’t receive the free lounge vouchers or hotel night (see below).

American Express cards may not earn the most miles, but they do have some of the best sign-up bonuses on the market.

How many miles do I earn?

I’ve never been able to wrap my mind around the June and December restriction- I get that those are peak travel months for Singaporeans, but really, offering 1.2 mpd for 10 out of 12 months a year isn’t good enough.

I’d have thought that cobrand cards would need to offer higher-than-average earn rates, because you’re asking the holder to “pledge their loyalty”.  Miles earned with the AMEX KrisFlyer Ascend can only be transferred to Singapore Airlines, after all. If I could earn the same or better rates through a non-cobrand card that gives me a wider choice of partners, then what appeal is there?

Here’s how this earn rate compares to other general spending cards at the S$30,000 income level:

All overseas transactions on the AMEX KrisFlyer Ascend are subject to a 2.95% fee. Surprisingly, this is one of the lowest FCY fees in the market (and before 1 March, was even lower at 2.5%).

Using your card overseas therefore means buying miles at 1.48 cents (not bad) or 2.46 cents (very bad), depending on time of year.

AMEX KrisFlyer Ascend Card members will earn 2 mpd on all transactions made with Singapore Airlines, SilkAir, and KrisShop, without cap. Unfortunately, there’s no bonus for Scoot transactions.

You could, however, earn 4 mpd by simply using the DBS Woman’s World Card instead, or 3 mpd with the DBS Altitude, so this isn’t a particularly attractive bonus rate.

AMEX KrisFlyer Ascend Card members receive a bonus 2 mpd on all Grab transactions, up to S$200 each calendar month. This means a total of 3.2 mpd on the first S$200 of spending. All Grab services are included, but GrabPay top-ups are excluded.

When are KrisFlyer Miles credited?

KrisFlyer miles are batched and credited to your account once a month. You can typically expect to see them credited around the end of your statement period.

How are KrisFlyer miles calculated?

Here’s how KrisFlyer miles earned on the AMEX KrisFlyer Ascend are calculated:

This beneficial rounding policy allows the AMEX KrisFlyer Ascend to compete favorably with ostensibly higher-earning cards like the UOB PRVI Miles (1.4 mpd), at least where small transactions are concerned:

If you’re an excel geek, here’s the formulas you need to calculate miles:

For the full list of formulas that banks use to calculate credit card points, do refer to these articles:

The good news is that American Express generally has the fewest rewards exclusions of any card issuer in Singapore. The following transactions will not earn miles with the AMEX KrisFlyer Ascend card:

Apart from that, anything goes. You will earn miles for transactions which are commonly excluded by other banks, such as hospitals, utilities, government payments (if AMEX is even accepted), membership fees and even charitable donations, as the screenshot below shows:

CardUp and ipaymy transactions will earn points as per normal with the AMEX KrisFlyer Ascend, albeit with a higher-than-usual admin fee. If you’re looking to pay income tax, however, CardUp is offering a discounted fee of 2.4% (normally 2.6%) for payments scheduled by 23 July with the code AMEXTAX24. 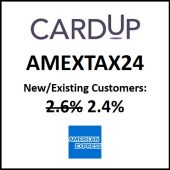 What do I need to know about KrisFlyer miles?

The AMEX KrisFlyer Ascend credits KrisFlyer miles directly to your account on a monthly basis, with no conversion fees.

This is a mixed blessing. On the one hand, you save on the usual ~S$25 conversion fee that most banks charge. On the other, direct crediting means the 3 year expiry countdown starts immediately. Contrast this to other cards where you enjoy “two validities”- one on the bank side, and one on the airline side.

In case you were worried, cancelling your AMEX KrisFlyer Ascend Card has no impact on KrisFlyer miles already in your account. 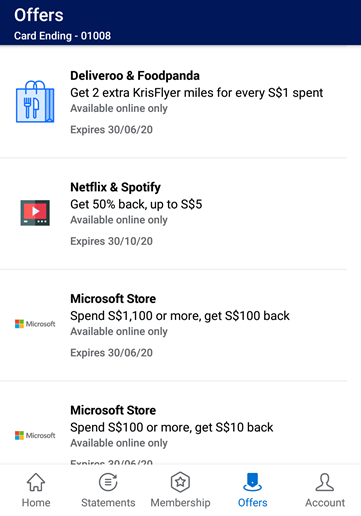 AMEX Offers are targeted deals pushed to your AMEX app, which can range from small savings like getting S$2 back on every S$10 spent at selected merchants, to much more substantial offers like S$75 off a S$300 Hilton transaction.

They can also take the form of bonus miles promotions, like the recent one for a bonus 2 mpd on Deliveroo and foodpanda.

Four visits is more generous than what other general spending cards offer, although it should be noted that:

AMEX KrisFlyer Ascend Card members receive a free one-night stay at selected Hilton properties every year. This is a crucial benefit, because your ability to recover the annual fee depends on how smartly you use it.

There are currently 154 properties where this voucher is accepted, all within Asia Pacific. Almost 100 of those are in China, but there’s also options in places like Bangkok,  Bali, Hanoi, Melbourne, and Phuket too.

Obviously, not all hotels represent equal value so you’ll want to choose wisely. As a general guideline, when it comes to brand positioning:

It doesn’t necessarily mean that you’ll always get the best value by redeeming your voucher at a Conrad though- dates and locations also play a big part. 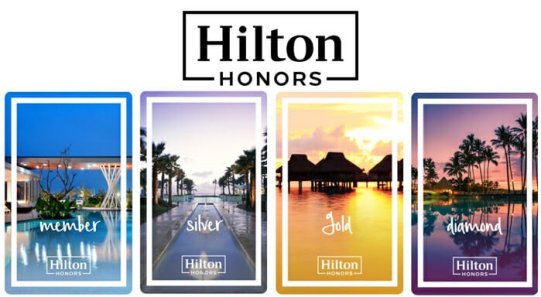 Now, Hilton Silver status, in and of itself, isn’t fantastic. It’s just one rung above the entry-level, with no free breakfast, lounge access or room upgrade perks. 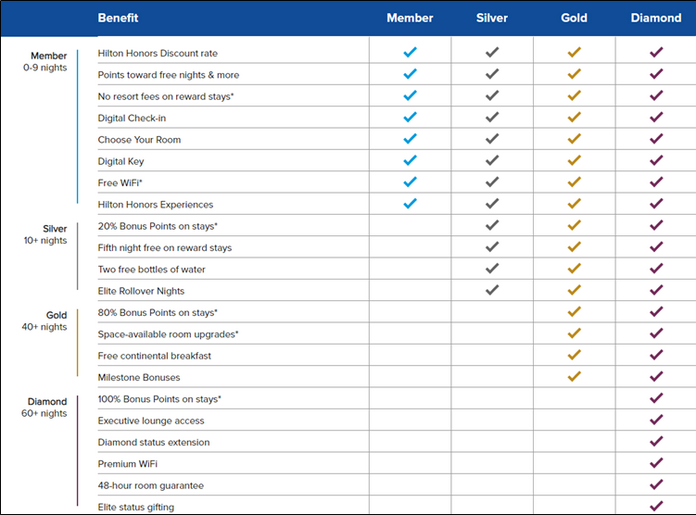 But why it matters is because Silver members get the 5th night free on all award redemptions. Hilton sells points several times a year, with prices as low as 0.5 US cents each. You could buy points and redeem them for Hilton’s top-tier properties, saving hundreds of dollars over retail value. 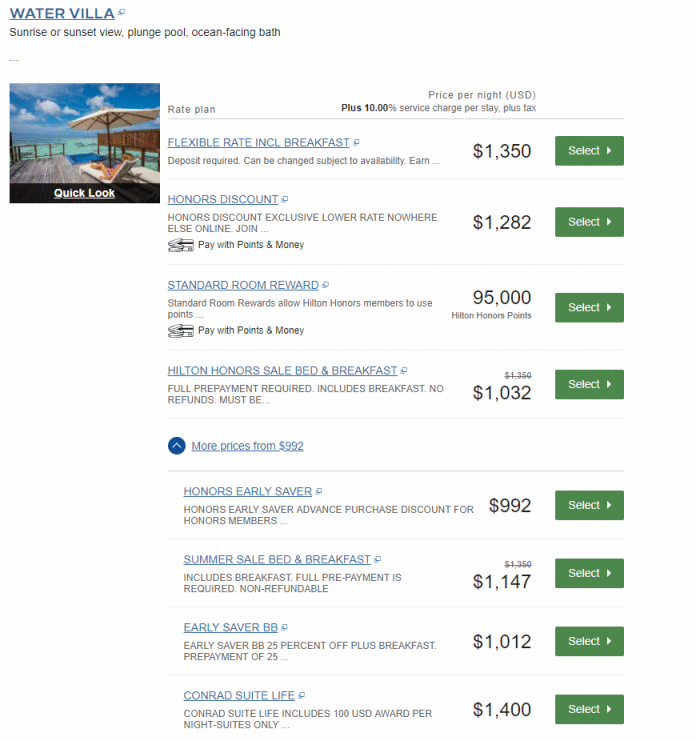 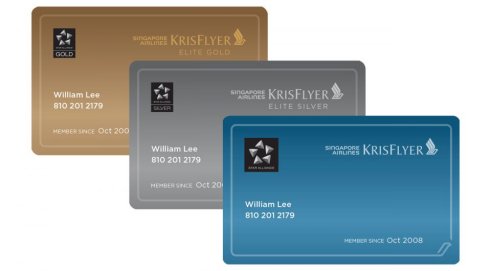 Cardholders who spend at least S$15,000 on Singaporeair.com purchases within the first 12 months of card approval will receive an automatic upgrade to KrisFlyer Elite Gold.

This benefit is only valid for the first year; subsequently, you’ll have to requalify by flying at least 50,000 elite miles in a 12-month membership period.

S$15,000 is indeed a lot to spend, but think about the scenario of someone who often buys air tickets for his entire family. He can’t accrue the elite miles on their tickets (only the person whose name is on the ticket can), but can nonetheless achieve KrisFlyer Elite Gold through his total card spending.

For what it’s worth, in 2019 American Express ran a special fast track offer which cut the spending to S$12,000, of which only S$3,000 had to be with Singaporeair.com.

Cardholders who spend at least S$15,000 on Singaporeair.com purchases between 1 July and 30 June of the following year will receive a double KrisFlyer miles accural voucher.

As the name suggests, this allows you to earn double the miles normally accrued. This sounds great, but it’s capped at a measly 5,000 miles. Here’s an illustration of how it works: 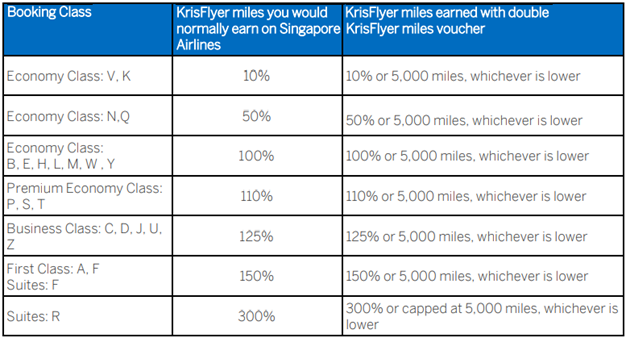 Many cards offer complimentary travel insurance, but not all policies are made equal. The Chubb coverage provided by the AMEX KrisFlyer Ascend ranks somewhere in the middle- not bare bones, but not comprehensive either.

However, there is no coverage for medical expenses, nor medical evacuation. This is something you can’t afford to miss, so a separate travel insurance policy is almost mandatory.

On the bright side, Chubb has confirmed that insurance coverage also applies to award tickets, so long as you use your AMEX credit card to pay the taxes and surcharges.

The AMEX KrisFlyer Ascend card can certainly pull its weight in the first year. Assuming you hit the sign-up bonus, you’re looking at 28,500 additional miles (we count the bonus component only, not the base), conservatively worth about ~S$500. Add in the free Hilton night and lounge vouchers, and your card has basically paid for itself.

It’s the second year on that the value proposition gets more dicey. With its underwhelming earn rates, you’re not going to want to put too much overseas or Singapore Airlines spending on the AMEX KrisFlyer Ascend. The occasional AMEX offer may provide a temporary boost, but it won’t be game-changing.

So if I had a big-ticket purchase coming up, I’d certainly look at the AMEX KrisFlyer Ascend for its meaty sign-up bonus. Otherwise, you might do better with other general spending cards.

So that’s my review of the AMEX KrisFlyer Ascend. What do you think?

Hi Aaron, just a data point, I applied for a fee waiver and also received my lounge vouchers and hotel voucher too. Just FYI!

Thanks! Yes, have heard of those cases but they’re the exception not the rule.

I also got the fee waiver with vouchers sent

how much did you guys spend? I didn’t get anything

If they include donation to charities under exclusion, I might cancel the card. The good thing is no need for KF miles transfer fees.
For many years, every annual family holiday includes 1 lounge access with the 4 vouchers. But the fee is higher now. Not sure if I will call to cancel in few months time when renewal rolls round.

Hi Aaron, would you be reviewing the AMEX Platinum Reserve Card any time soon?

unlikely. you can read this: https://milelion.com/2019/09/26/neither-here-nor-there-the-future-of-the-amex-platinum-reserve/