Using your AMEX KrisFlyer Ascend hotel voucher in Singapore just got a whole lot more attractive, with Conrad and Hilton added to the mix.

One of the best features of the AMEX KrisFlyer Ascend is its annual Hilton free night voucher. Used judiciously, it can help recoup a significant portion of the card’s non-waivable S$337.05 annual fee. 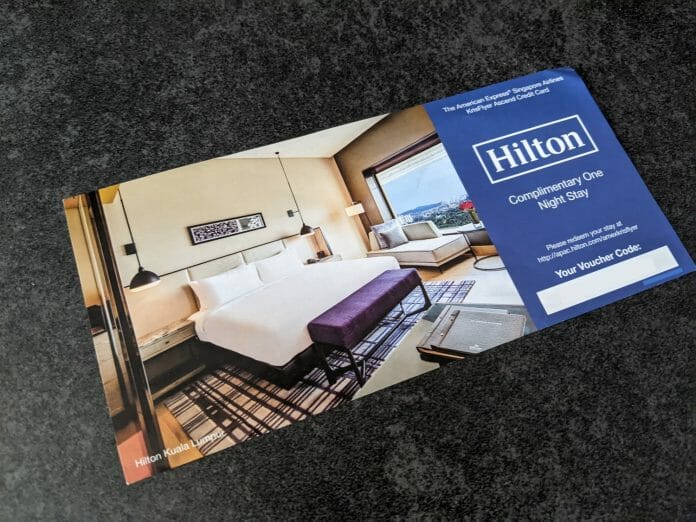 But 2020 has not been kind in this regard, and most cardholders are probably still holding on to their vouchers.

While it is possible to use the voucher in Singapore, the only property it’s valid at is the rather underwhelming (and not open for staycations anyway) Hilton Garden Inn Serangoon. With all due respect to this property, it seems like a waste to use it here when you could just as well redeem it at the Conrad Bangkok or Hilton Bali.

But there’s some good news on that front though…

AMEX KrisFlyer Ascend cardholders who visit the booking portal will have noticed some new additions to the hotel list. After entering your credit card number and voucher code (don’t worry, you’re not committing to use your voucher yet), you’ll see the following. 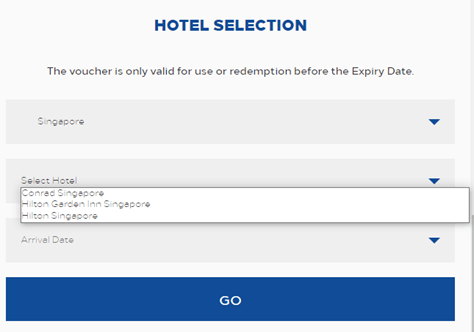 In case you can’t read that clearly, the drop down box for Singapore now lists:

Conrad and Hilton have not been added to the “official” list yet, but I can confirm they’re very much bookable.

While the Conrad Singapore has not been approved for staycations yet, I’m able to find abundant availability for voucher redemptions from 25 December onwards (yes, at the time of writing this article, it’s even possible to book a stay on Christmas day). 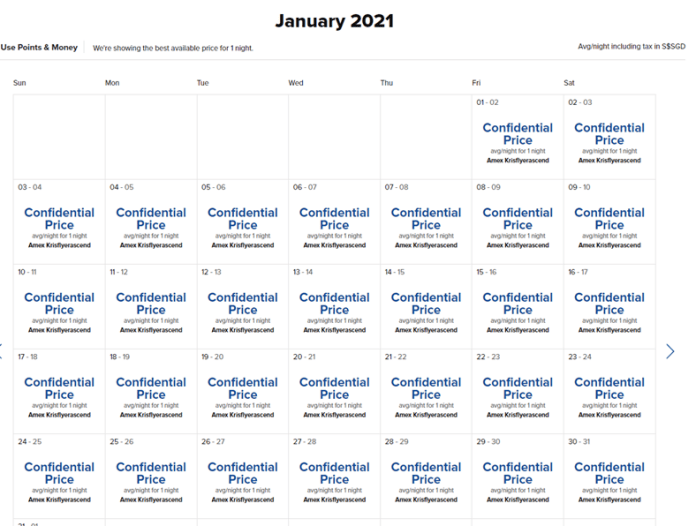 The KrisFlyer Ascend voucher books you into a Deluxe Room (the base category), in either a King or Twin configuration. 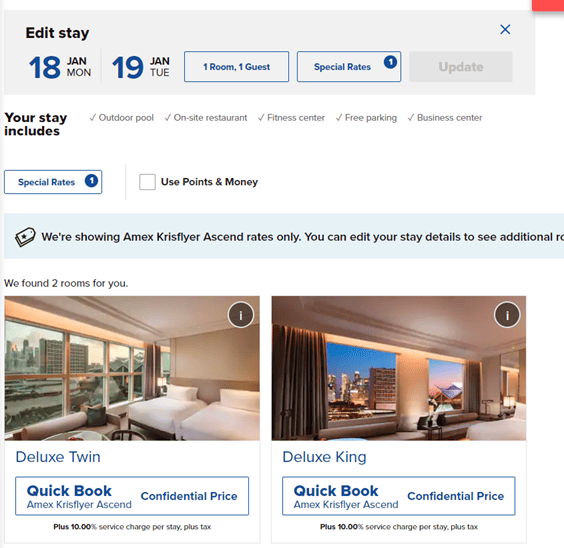 For the Hilton Singapore, it’s still possible to book a couple of weekends in December, and January onwards is wide open. 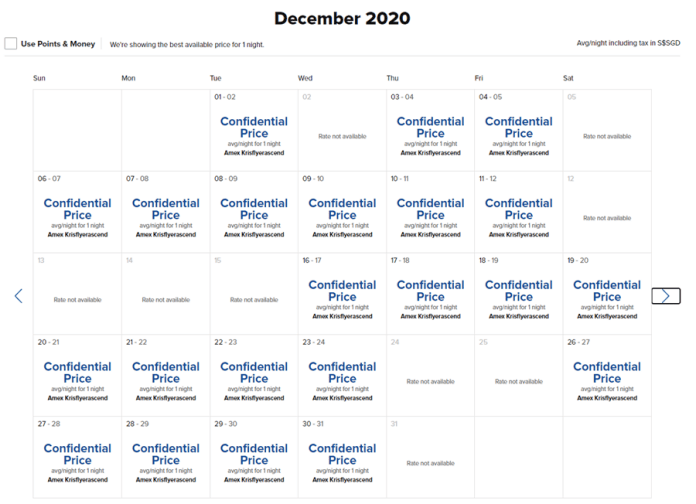 The KrisFlyer Ascend voucher also books you into the base category room, in either a twin or King configuration. 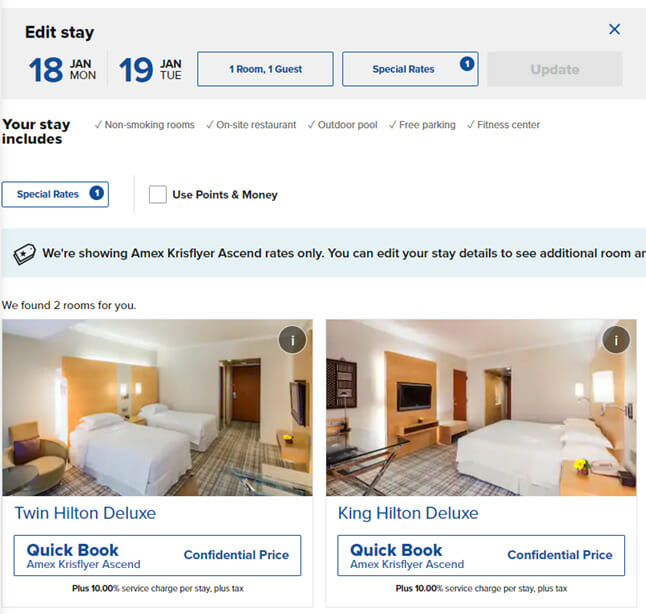 For both the Conrad and Hilton, bookings are fully refundable if done by 11.59 p.m local time the day before arrival (do note there are some special dates where a S$180 deposit will be taken, and in those cases you need to cancel at least 7 days prior).

Do note that Hilton elite benefits will not be honored on these stays, such as free breakfast (the Ascend voucher does not include it) or lounge access.

As a reminder, here are the key features of the AMEX KrisFlyer Ascend Card.

American Express has just retooled the sign-up bonus for this card, which you can read about here. A full review of the AMEX KrisFlyer Ascend can be accessed below

I didn’t have a great stay experience at the Hilton Singapore, but I am looking to try out the Conrad at some point in the future.

That said, I may not pull the trigger just yet- my voucher is valid till 31 July 2021, and I’m hoping I might yet be able to use it overseas.

I managed to get my AMEX Ascend card waived for this year, not sure is it probably due to the pandemic as I did not get to utilize the SATS vouchers at all.

yup, it is possible (by left) to get a waiver, but the official stance is no. just call and try your luck

I’m happy. Last month I called Hilton Singapore and they told me I can only redeem it at Hilton Garden Inn in Singapore.

If you cancel a booking made with the voucher, can the voucher code be reused?

Cannot. You can call AMEX up to request for a replacement voucher.

Same here, managed to get a waiver without even trying.

I have been getting AMEX ASCEND Card annual waivers all the while and they send me the vouchers every year too. It is quite easy if you spend enough on the card. But you have to call them. This year they auto send me the vouchers for me without calling. They also send another replacement Hilton hotel voucher to me as the old one is expiring end Dec. I used both the vouchers to book for 2 nights at Conrad Centennial now! Happy man! The Hilton Garden Inn is really small and I don’t like the location.

Got waiver of annual fee this year too after I called in (hence no voucher for this year). Used the voucher last year to redeem against Conrad Bangkok which was really nice and Conrad Bangkok even upgraded me to a newer renovated room. Glad that they now include Conrad Singapore for the voucher redemption.

Can I ask why does Conrad show confidential price? Is it bookable or free? Like I tried and managed to select a date in Jan but it shows confidential.

I’m having issues booking the free stay using the voucher. Even after I input my credit card and voucher code – which is then approved cos I can see the green ticks beside them – i do not see any confidential pricing but rather i see actual pricing of the rooms and nights. Do i proceed to book and make payment with the Amex Krisflyer ascend card and then produce the voucher upon check in? Is this how it works? Or do i have to see the term confidential pricing to know it is correct? Thank you.

I think this means the date you chose has a top up.

click on the calendar, select “shop by price” next to flexible travel dates

I can’t find any rates for Hilton Singapore. Conrad is also only available on 3 – 10 Jan. Both hotel seems to be not on the approved list for staycation yet.

I just booked into the Conrad Singapore and they did not honour my Hilton Gold status of free breakfast. Spoke to the operator and supposedly it’s because using the Krisflyer voucher is akin to a booking via an agent. I did not experience this when I used the voucher last year in Bangkok.

Anyone else experienced the same thing?