Platinum at Basque Kitchen serves up delicious food in a beautiful setting, but a NOOK replacement it's not.

American Express recently announced the launch of Platinum at Basque Kitchen, its latest members-only concept for Platinum Charge and Centurion cardholders. This venue is currently open to Centurion members, with Platinum Charge members getting access from 27 April onwards.

I previously referred to Platinum at Basque Kitchen as a NOOK replacement, but having visited the venue yesterday for a media event, I’m going to have to revise that statement. Let’s be clear: Basque Kitchen is a very nice restaurant, but it’s no NOOK 2.0. The best way I could describe it is a dining tie-up, and the question then becomes: is that what cardholders really want?

The jury’s out until more people have had the chance to visit, but if you ask me, I’m not yet convinced.

Basque Kitchen is located at 3 Fullerton Road, at The Fullerton Waterboat House. In my previous article, I said that it took the place of 1919, but that’s incorrect- 1919 occupied the third floor; Basque Kitchen occupies the ground floor space that formerly hosted the fanciest Starbucks in all of Singapore.

Fullerton Waterboat House is located along the F1 route, but for those hoping that Basque Kitchen might serve as a good vantage point to watch the race, think again. It’s only the ground floor that’s occupied, and Basque Kitchen doesn’t have the rights to the balconies on the upper levels.

Basque Kitchen operates from Tuesday to Saturday during the following hours:

The lease runs until 19 April 2023, and bookings can be made by either principal or supplementary Platinum Charge or Centurion cardholders.

The immediate entrance of Basque Kitchen deposits you in the Pintxos Bar area, where you’ll do your Safe Entry check in and temperature screening.

There is a mix of counter seating, booth seats, a communal dining table and a smattering of two-tops.

Compared to the main dining area (see next section), this is definitely the more “NOOK-ish” one, a place where you could whip out your laptop without seeming out of place. There’s free Wi-Fi, and it clocks in at a blazing fast 91 Mbps down/ 93 Mbps up.

A small set of bathrooms are found in the bar area, with fancy Ashley & Co hand soaps (S$45 a bottle!).

At the rear of the bar is a dazzling mirror-lined corridor with an automatic sliding door, through which lies the dining area.

Once inside, you’ll see two roughly equally-sized areas. One is for Platinum Charge and Centurion members; the other is for the general public. There’s no wall or any sort of partition between the areas. In fact, the only way to tell you’ve crossed over is to look at the difference in flooring.

Guests in both sections have a straight line of sight to each other, and the distinction feels rather arbitrary to me. In fact, it reminds me of those airport lounges which are basically one facility but have a roped-off area for First Class passengers, in full view of the rest of the lounge.

I was concerned at first that the setup might be embarrassing for some people, insofar as it creates the impression they need to appease their ego by being seated in a special space. However, the Platinum area looks the same as the public area, for all intents and purposes and the average guest won’t even be aware of the distinction. There’s no Centurion logo, no standee, no table topper, nothing.

But hold a plate up to the light…

I was told there’s some subtle American Express branding on the backdrop here, but for the life of me I can’t spot anything. Can you?

The food at Basque Kitchen is exquisite, as you might expect for a restaurant of this caliber. I tried the lunch menu, which rotates periodically.

I have absolutely nothing bad to say about the food. Each item was delicious, and I’ll let the photos speak for themselves.

Platinum Charge and Centurion cardholders are entitled to a welcome drink. Centurion members receive a glass of 2012 Boërl & Kroff Blanc de Noirs, while Platinum Charge members receive a glass of 2006 Piper-Heidsieck “Cuvée Rare” Brut Champagne. Incidentally, the latter is the same champagne that Singapore Airlines serves in the First Class section of the SilverKris lounge, so it may taste familiar to a few frequent flyers.

Both are excellent champagnes, but, and this is a big but, unlike the old NOOK the welcome drinks are not really complimentary.

You won’t have too much trouble hitting S$30 per person though, given the prices. S$16++ for sour dough bread, anyone?

Platinum at Basque Kitchen: My thoughts

I absolutely loved NOOK. To me, it was the perfect upgrade to VIBES. Its centralized location made it a great option to pop-in between meetings, or for a pre-dinner drink. The complimentary Wi-Fi was fast enough for work, and you could unwind with a book from the library or even a small selection of card games. And while I initially had concerns about capacity, I never found it to be overcrowded (although to be fair I mostly visited during the day on weekdays).

Platinum at Basque Kitchen, in comparison, is not quite what I expected. When I first read the eDM, I got the impression that this was going to be the next NOOK. In reality however, it’s  more like a restaurant tie-up. 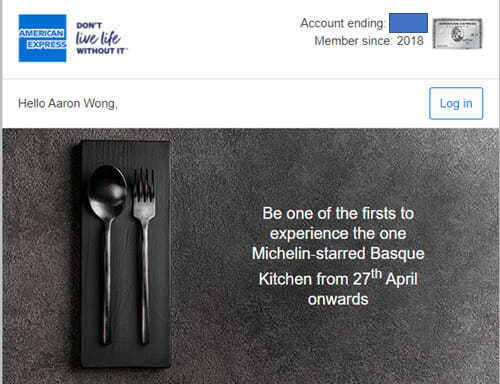 It was perhaps overly optimistic to think that cardholders would get no-strings-attached tipples from a bottle that costs upwards of S$218 at retail, but I suppose it all boils down to expectations management. The eDM simply mentioned a complimentary drink without any qualifications, and based on past practice at NOOK, it’d be reasonable to assume there weren’t any.

In fact, the T&Cs (click here and scroll down) make no mention of a minimum spend. You’ll only find this if you click on the Pintxos Bar Menu tab, in the fine print at the bottom. This needs to be signposted a lot better, in my opinion. 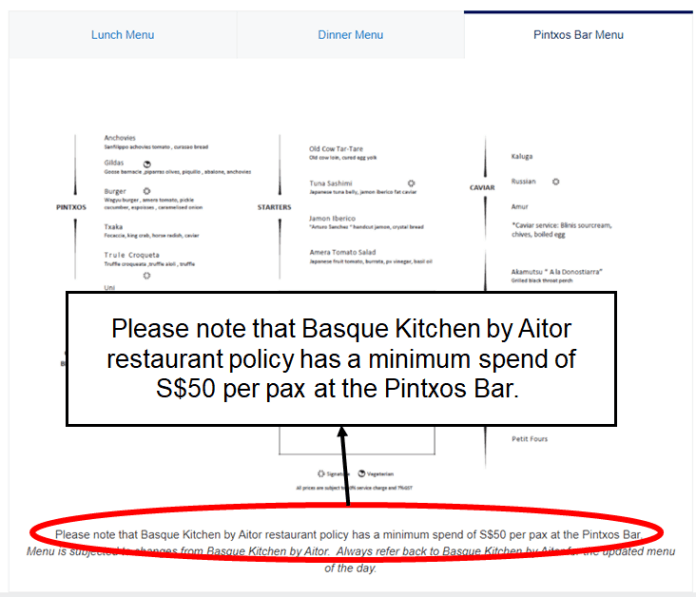 Look, I’m fully aware all this gnashing of teeth over the absence of free booze is quite possibly the zenith of first world problems, but at the end of the day, cardholders paying S$1,712 a year (or more, for Centurions) will be looking for every opportunity to justify the expense to themselves (or their spouses). This doesn’t really help.

Moreover, because the welcome drink has basically become a quid pro quo, this revised benefit is more or less similar to what other cards are already offering at a much wider range of restaurants. For example, UOB Visa Infinite Metal Card members can enjoy a free glass of wine when they make reservations at a selection of celebrity chef restaurants worldwide.

Heck, even generic Visa Infinite cards can get a free welcome drink at selected restaurants when they make reservations through the Visa concierge. 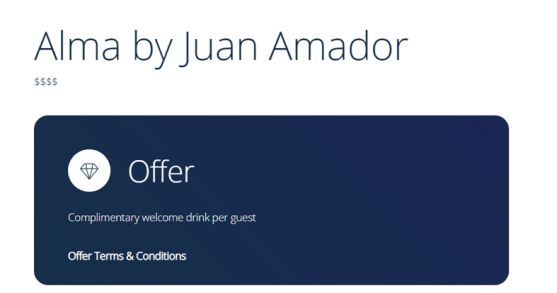 Viewed through that lens, the perk isn’t that unique. And frankly, I don’t believe it’s what members wanted either. There’s no shortage of upscale dining tie-ups for premium cardholders. OCBC VOYAGE and Citi Prestige members get their 1-for-1 offers. UOB Visa Infinite members get 50% off dining at the Grand Hyatt. Platinum Charge and Centurion members already have excellent F&B benefits in the form of Love Dining and Chillax.

What set the Platinum Charge and Centurion apart from the competition was the provision of a private, members-only space suitable for work, meetings, and lounging. It was like having a mini club membership. Of course there was no promise that’d continue forever, but it was certainly a big pull factor for some.

To put it another way, while I’ve historically viewed NOOK as one of the reasons to maintain my AMEX Platinum Charge (who doesn’t value free drinks and a quiet place to work?), I don’t see Platinum at Basque Kitchen in the same light at all. It certainly wouldn’t factor into my decision when renewal time rolls around.

I can appreciate Platinum at Basque Kitchen for what it is- a restaurant with lovely food and ambiance. However, it’s no VIBES or NOOK. These were great while they lasted, but American Express, for better or worse, has decided to go in a different direction this time round.

Have you visited Platinum at Basque Kitchen yet? What’s your take?

Aaron Wong
Aaron founded The Milelion to help people travel better for less and impress chiobu. He was 50% successful.
Previous articleEarn Accor Live Limitless (ALL) points on dining, with no stay required
Next articleFlash sale: Get a free Apple iPad when approved for a Citibank card

To be fair, Amex never advertised this as a nook replacement, nor promised that a benefit like nook would be around forever, nor advertises a place like nook as a card benefit.

It was a good thing that went on for two years (?) but shouldn’t be taken for granted or entitlement. The disappointment members may be facing because of their wrong speculation shouldn’t be pinned on amex.

*This is the opinion of a teetotaller*

yup, completely agreed. but the comparisons are inevitable in my opinion.

“justify the expense to themselves (or their spouses)”

Gets harder and harder each year to justify to spouse as the benefits diminish.

This would likely be a once bitten twice shy location for most members. There are much better dining options to be had as Aaron pointed, and frankly with prices as such and a growing local clientele market post covid, I don’t see Basque Kitchen surviving it’s lease with Amex.

Are they located where the Starbucks were previously?

It’s mentioned in the article.

Even after being a Centurion Member, this will be a place not even worth exploring. It’s so bizarre that Amex moved here from Nook even in this current market condition.

Are you speaking as a Centurion? This place is not worth exploring to you in what sense? Is it the location? The food?

So it’s been over a year – what’s the verdict? I haven’t been there yet given the reviews but wondering if other members have used the Pintxos bar for pre-dinner drinks / casual hang-out?

Can we just walk in with our amex plat card? or we need to make a reservation?