The Grand Mercure Roxy has reopened for staycations with a special rate of just S$64 nett per night, perfect for mattress runs.

While it’s hardly the top of my mind for a staycation, the Grand Mercure Singapore Roxy reopens to the public today and they’re offering a rate so cheap it falls into mattress run territory.

Accor Plus members can book rooms at just S$64 nett per night, while everyone else gets a rate of S$75 nett.

From now till October 2021, the Grand Mercure Roxy is selling rooms at just S$64++ (S$75 nett) per night, a rate that’s available on both weekends and weekdays.

To book this, you’ll need to go via the ALL x Mastercard landing page, make your bookings by 31 July 2021 and pay with a Mastercard. You also need to be a member of the free-to-join ALL loyalty program.

It gets even better: if you’re an Accor Plus member, make a booking via this link and you’ll get a further 10% off, which reduces the rate to an astounding S$54++ (S$64 nett). That’s even cheaper than a Hotel 81, and dare I say more pleasant. 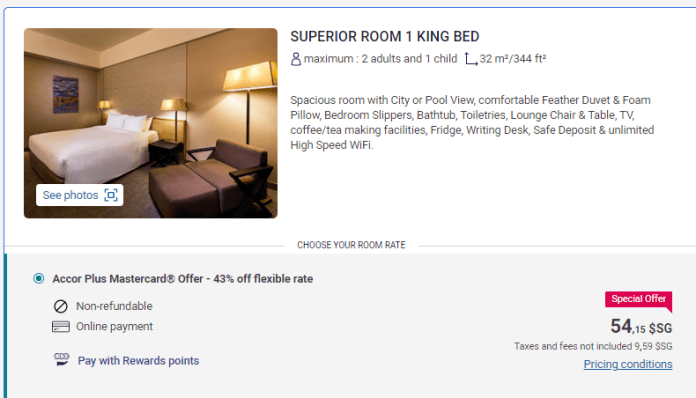 Accor Plus membership normally costs S$408 a year, but it’s available for free with an AMEX SIA Business Card, for those who own a small or medium-sized business.

Bookings are non-refundable, and you can choose to offset the cost with ALL points at a rate of 2,000 points= €40.

What should I expect at the Grand Mercure Roxy?

At this time, only the Superior and Deluxe categories (32 sqm) are available for booking, with Executive Rooms, Studio, Junior and Business Suites still unavailable. The executive lounge has not yet reopened either.

All rooms have bathtubs, although you might want to temper your expectations. Superior and Deluxe Rooms have combination tub/showers, and it’s only the Junior Suites and above that have separate showers and tubs. The 54 sqm Business Suites have free-standing tubs.

As for the rest of the hotel, again, let’s remember we’re talking 4-Stars and S$64 nett a night. There’s a swimming pool and gym, and other amusements can be had in-room. If you’re doing a mattress run, you might as well make the most out of it.

There’s no shortage of great food in the hotel’s vicinity, but Accor Plus members can enjoy up to 50% off the bill at Breez Bistro.Bar, Feast Roxy, Jia Wei Chinese Restaurant and Wave Cafe.

You can read a few pre-COVID trip reports via the links below (do note that a few are based on media invites):

Mattress running for ALL status

If you’re looking for a cheap way of requalifying for Platinum, then it’s hard to go wrong with the Grand Mercure Roxy deal (remember: stays at ibis budget don’t count for ALL). It obviously won’t help with Diamond though, where qualification requires a minimum spend.

I’d say you shouldn’t bother with requalification for Silver or Gold, as the benefits are close to non-existent.

I’ve never stayed at the Grand Mercure Roxy, but based on the photos, I don’t think I’m missing out on much. That said, a S$64 rate is still great value, and enticing for those trying to requalify for ALL status.

Anyone stayed at the Grand Mercure Roxy? What should we expect?

“Other amusements can be had in-room”

This page “https://accorplus.com/sg/offers/grand-mercure-singapore-roxy/” states stay period is from 1-31 Aug, then how about my stay? I booked 18/19 July, will I be able to stay?

Why not? STB alr approved for staycay