Overshooting your 4 mpd cap can be a painful experience, but DBS Payment Controls allow cardholders to set limits on monthly spend.

If you use a specialised spending card like the DBS Woman’s World or Citi Rewards, you’ll know how frustrating it can be to overshoot the monthly 4 mpd cap.

After all, specialised spending cards are great- up till a certain point. Once you exceed the 4 mpd cap, you’ll earn a measly 0.4 mpd on all subsequent transactions, and would be better off using a general spending card instead!

In an ideal world, you’d keep close tabs on your cumulative spending and stop using a card once its monthly cap has been hit.

In reality, however, it’s tough to keep track of things on the fly. Sure, you could login to your ibanking app each time before you swipe your card, but do you really want to go through that hassle (not to mention manually summing up transactions where statement months and calendar months are not in sync)?

Fortunately, DBS cardholders have a potential solution on their hands…

In September last year, DBS rolled out an enhanced suite of payment control features that give customers more granular control over their debit and credit cards.

Some of these features were already common across other banks, like the ability to temporarily block and unblock cards, or the ability to enable and disable overseas/online transactions.

But there was one unique feature that allows cardholders to set a monthly spend limit per card, and this is the one I’m chiefly interested in. This was originally intended as a budgeting tool, but can be equally useful for those who don’t want to overshoot the 4 mpd cap on the DBS Woman’s World Card.

To find this feature, login to the DBS app, tap “More” at the bottom right corner, then scroll down to “Manage Cards & Loans”. Tap on “Payment Controls”, scroll to the DBS Woman’s World Card, then tap “Set a monthly spend limit”. 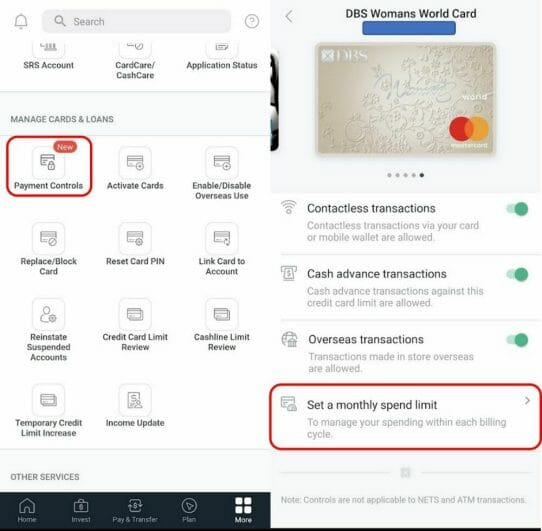 Since the DBS Woman’s World Card caps its 4 mpd for online spending at S$2,000 per calendar month, I can choose to set S$2,000 as the limit. 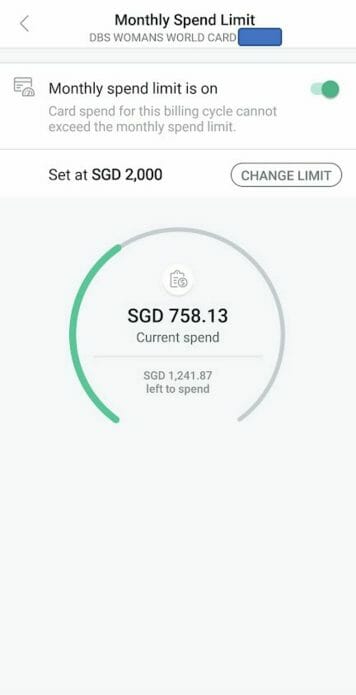 If I attempt to make a transaction that will put me over the limit, the transaction will fail, and I’ll receive an email alert. It basically ensures there’s no way you’ll overshoot the 4 mpd cap. 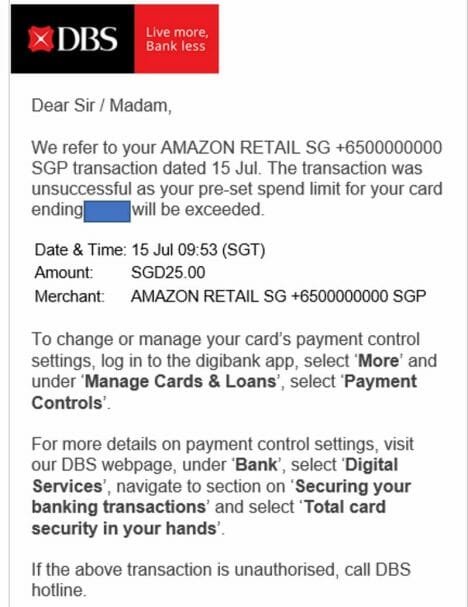 Limits can be adjusted or removed instantly, but there’s a few important things to note.

First, if you’re using your card for a recurring billing arrangement (e.g. monthly Netflix or Spotify subscription), you should exercise caution with a monthly spend limit since it could inadvertently cause the billing to fail. This is particularly important if you’re using your DBS Woman’s World Card for a BNPL payment scheme, since missing a scheduled payment can lead to an admin fee and the freezing of your account.

Second, there may be situations where you don’t mind overshooting the limit a little bit. For instance, suppose you’ve already spent S$1,500 this month, and have a further S$509.99 online transaction to make. This would put you over the S$2,000 monthly limit, but I imagine most people wouldn’t mind earning 4 mpd on S$500 and 0.4 mpd on S$9.99.

You could set your limit at S$2,100 or so to cover such scenarios, but then again you don’t want to be in a situation where you’ve hit S$2,000 and are still charging smaller S$10-15 gojek/Grab transactions to the card.

Third, while the DBS app can display a summary of your spending broken down by category (based on MCC), it’s not intelligent enough to apply spending controls at this level.

For instance, the DBS Vantage earns 4 mpd on dining and petrol, capped at S$2,000 per calendar month. It’d be great if I could tell DBS to block all further dining and petrol transactions once the S$2,000 cap has been hit, but unfortunately that can’t be done (short of blocking all transactions). This isn’t really an issue for the DBS Woman’s World Card, since you’d only use it for online spending anyway.

In that sense, it’s not a perfect system. I quite like the idea that someone suggested in the Telegram chat of a telco-style SMS alert that informs you when you’ve utilised 80, 90, 100% of your monthly data balance. Until that day, however, this is as good as it gets.

What about other banks?

As useful as this functionality would be for Citibank, HSBC and UOB cardholders, only DBS offers it at the moment.

At most you have the option to permanently adjust your credit limit downwards, but that seems too blunt an instrument to use. After all, if push came to shove, I still want the ability to charge a larger amount to my card.

It means you’ll just have to be extra vigilant about cumulative spending as the month goes by, and the occasional Excel tally might not go amiss.

DBS cardholders can use the Payment Controls feature to limit the monthly spending on their cards, an easy way of ensuring the DBS Woman’s World Card’s 4 mpd cap isn’t busted.

While it’s not as refined as I’d like it to be, it’s still the most granular control that any bank in Singapore offers at the moment.

How do you ensure you don’t bust the 4 mpd caps on your cards?

Small issue. But 2000 cap is calendar month but the payment control is per billing cycle?

Yeah, I just realised. A rather big issue actually! I’m checking if Dbs allows you to change your statement cycle to match calendar month, like uob does. If not, then this will be of limited use…

Can change. Example my statement date is 30th for all my DBS cards. Not perfectly calendar month, but close enough to plus minus 5%.

For Citibank, they set mine to 28th. It was a system limitation as the month of Feb had 28/29 days. I shall try for DBS.

Anything from DBS about this?

Banks want you to exceed the cap by accident, 4 mpd isn’t very profitable for them.

I have called UOB and it is possible to adjust the credit limit by individual cards. Alternatively, we can always make use of “supplementary cards” and assign the credit limits that we want (provided they are not going charge us annual fees for that. 🙂