With free inflight entertainment, meals, a checked bag and 35 inches of legroom, Air Premia is unlike any budget carrier you've flown.

Singaporeans heading to South Korea will now have an additional option with the launch of Air Premia’s Singapore-Seoul Incheon service. It joins Singapore Airlines, Asiana, Korean Air and T’way Air on an increasingly crowded route, with a combined total of more than 30 flights weekly.

While Air Premia may be referred to as a “budget carrier” in some quarters, on closer inspection it’s anything but. All passengers receive lounge access in Singapore (to the marhaba Lounge, till 29 Sept) a free checked bag and complimentary hot meals, there’s seatback IFE screens and in-seat power, and with seat pitch starting from a whopping 35 inches, it’d put many legacy full service carriers to shame.

The main question is: will their business model work?

Who is Air Premia?

Air Premia was founded by a former president of Jeju Air, and operates a single-type fleet of Boeing 787-9 Dreamliner aircraft. “Single-type” in more ways than one, because Air Premia has only one aircraft at the time of writing. A further two are slated for delivery as part of a lease agreement with Air Lease Corporation, and five more are on order from Boeing. Air Premia eventually plans have a total fleet of 10 aircraft.

The airline received its air carrier license in March 2019, but due to pandemic-related delays, only made its first commercial flight in August 2021.

Unlike most budget carriers, Air Premia isn’t focusing on short-haul routes. Rather, it’s setting its sights further afield, with plans to serve Los Angeles, Honolulu, Vancouver, Munich/Berlin and Cairns in the future.

Very few airlines have managed to make long-haul budget flights work (see Air Asia X, Norwegian Air, Wow Air, XL Airlines and Zoom Airlines), but Air Premia believes it can break the jinx thanks to lower operating costs arising from a single aircraft type (where have we heard that before). I wish them all the best with that, but I’m skeptical to say the least.

As an aside, you should absolutely make time to read Air Premia’s unintentionally hilarious FAQs section, which includes curt responses to questions like “Aren’t there too many players?”/ “No there aren’t. Air Premia set its business model developing untapped market” and “Is there any safety concern?”/ “The safety of an airline is not determined by its size”.

Air Premia has commenced four times a week service between Singapore Changi Terminal 3 and Seoul Incheon from 16 July 2022, with departures from Singapore on Monday, Tuesday, Thursday and Saturday.

The outbound flight timing from Singapore is far from ideal (even a bustling hub like Changi becomes a ghost town at 3 in the morning), but I suppose the upside is the return flight from Seoul lets you enjoy a full day of activities.

Round-trip Economy and Premium Economy fares start from S$402 and S$1,052 respectively, including all taxes and surcharges.

All fares come with at least 15kg of checked baggage.

That’s because passengers are given an extremely generous amount of legroom . The 253 seats in Economy Class are configured in a 3-3-3 layout, each with 35 inches of seat pitch (Singapore Airlines only offers 32 inches!).

In fact, Air Premia is using the exact same Recaro CL3710 seat that Singapore Airlines has on its B787-10s, with seatback 12-inch HD IFE screens, USB charging and in-seat power.

The 56 Premium Economy Class seats are configured in a 2-3-2 arrangement, with 42 inches of seat pitch per passenger.

The Recaro PL3530 has been installed here; the same model that Emirates and Vistara are using. IFE screens get an upgrade to 13 inches, with the same USB charging and in-seat power outlets you’ll find in Economy. 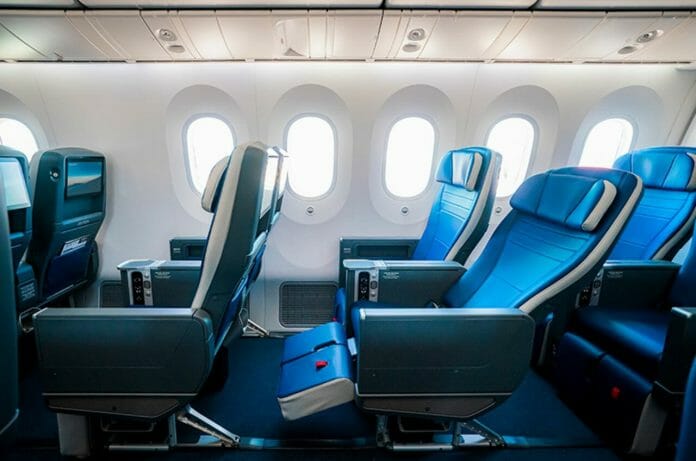 Air Premia aircraft have inflight Wi-Fi, with plans starting from US$2.95. All plans are valid till data is fully consumed or the time limit expires, whichever comes first.

All passengers will receive an inflight hot meal, with premium teas, alcohol and selected beverages available for purchase in Economy Class (all beverages are complimentary in Premium Economy Class).

Air Premia has commenced flights between Singapore and Seoul Incheon, offering a very competitively-priced option (at least in Economy Class) that doesn’t cut back on frills either. In fact, if you showed me the list of amenities without mentioning the airline, I’d be hard-pressed to tell it wasn’t a full service carrier!

While I love the sound of the Air Premia passenger experience, I do have concerns about the viability of the business model. The market for long-haul budget flights is something of a poisoned chalice, and I’m not sure the cost savings from operating a single aircraft type (no matter how fuel efficient it is) will offset the low density layout, or the relatively low turns a medium-haul route like Singapore-Seoul affords.

Besides, they won’t be able to match the frequency or connectivity of competitors in the region, and it’s not like they’re part of any alliance that can bring connecting traffic.

Unfortunately, there aren’t a whole lot of reviews of the Air Premia experience, though I did manage to find a couple on YouTube. If you’re booking a flight, do let us know how it goes!

Would you fly with Air Premia?

89cm seat pitch? I’d book that in a heartbeat for $400 round trip even without the meal and checked baggage.

a 3 a.m departure time will take its toll on even the most seasoned of travellers though!

It’s targeting budget travellers. Hence, a 3am departure means that these travellers can save a day (for whatever activities) and a hotel night stay. Ideal in my opinion.

fully agree with you Aaron.

Looks interesting but the flight times are a deal breaker for me (even in PE I won’t be able to sleep much).

It’s absolutely fine actually, I just experienced it. You land around 09:30am and all going well reach your hotel in central Seoul at 12:00pm, perfect for an early check-in (usually 3pm). Don’t hesitate to book premium eco on the way out for a more comfortable overnight flight !

Definitely worth it, SQ has no saver available. The economy ticket cheapest is 700+ but not as good in pitch. Other budget flight to seoul also have past midnight flight and less pitch. there is a Korean video (no Eng subs) that tours the plane. Since you said they only have one then there’s no mistaking what you will get lol https://youtu.be/_GVkzinVOeE

A bit more space has been the cry century but airlines seems to keep taking that away the more we cry. Scream, shout whatever

Good luck and all the best to YP

more seats = can fit more = can sell each seat for less.

give me that anytime

3am departure is good tho.

Take off, sleep onboard, wake up enjoy your FULL day at the destination..

someone hasn’t passed 30 yet…

Maybe its just me but i can sleep anywhere

I’m 34 and I travelled with 2 kids to Seoul from SG at 3am, it was perfect as the kids had a nice short sleep (I didn’t sleep) and we arrived in the morning and took a taxi to hotel in Seoul. Service is great and food is nice too. The amount of legroom you get in Air Premia economy is bigger than SQ economy and the have the latest in flight experience which is a bonus.
so overall it was a great experience.

10:50am arrival is not a very full day though, especially as ICN is so far from town

You forgot to mention that Air Premia offers all of its passengers, regardless of class or ticket type, free access to the Marhaba Lounge at Changi Airport Terminal 3.

Found this review on the inaugural flight. At sgd$400+ definitely worth it.

The 3am departure won’t kill me. My kids will. HAHAHAHA! I booked Korean for a more humane flight time for the sake of our sanity.

Hi, thank you for the helpful article with so many pics and details! Just wondering, would you know if the lounge access available for tickets booked by 29sept but flying in October?

do they not have a website? Can’t seem to find tickets for Nov!

Same here – no tickets for anything past October?

I’m able to see them. https://www.airpremia.com/?locale=en

$350 for a return flight with a simple meal and IFE and longer seat sounds really good, that’s if timing is not an issue.. sadly I think the free lounge access is going to end soon…

Same here! I don’t see any tickets past October 🙁

Same here unable to see tickets for November… any idea when i’ll be available? 🙁

Hi, any idea if there is any additional charge, or involve currency exchange charge, etc? Saw that bank deducted additional 3% than what was shown on my receipt.