You can read about these changes in the article below.

This is broken down into:

5,000 miles will be awarded to cardholders who make their first spend of at least S$5. This has been upsized from the previous 3,000 miles, and will be credited the following month.

Crediting will take place according to the following timeline.

How do you know whether you’re in the first 2,000? You don’t. It’s a classic UOB spend-and-pray promotion- spend first, hope the miles show up later. 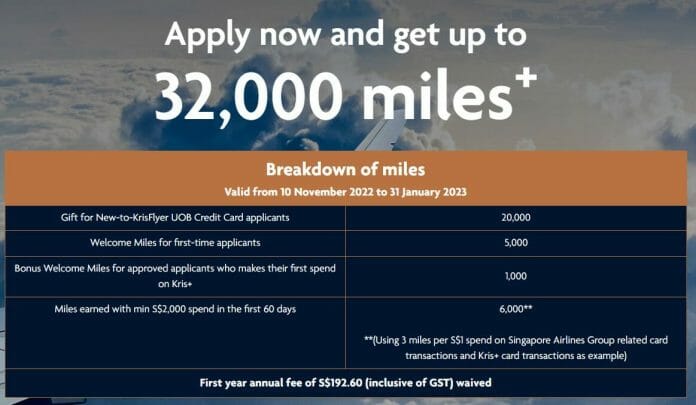 With regards to “Accelerated Miles”, do note that a minimum spend of S$800 on Singapore Airlines, Scoot and KrisShop is required in a membership year (recently increased from S$500):

You’ll basically be waiting up to 14 months for those miles- how’s that acceleration working out for you?

Approved cardholders will need to spend a minimum of S$2,000 in the first 60 days of approval. The full list of exclusions can be found in the T&Cs, but the key ones to note are:

The full T&Cs of this sign-up offer can be found here.

If they spend at least S$800 on SIA Group transactions in a membership year (excluding Kris+), they will earn 3 mpd on dining, food delivery, online shopping & travel, and transport.

For a review of the KrisFlyer UOB Credit Card, check out the post below.

New-to-bank customers can get up to 26,000 bonus miles with a new KrisFlyer UOB Credit Card. However, you’ll need to decide whether you’re comfortable rolling the dice on being in the first 2,000 eligible applicants each month.

Uncertain sign-up bonus aside, I do think this is a card worth having because of its uncapped 3 mpd on dining, food delivery, online shopping and travel, and transport. It’s true you could earn 4 mpd on most of these categories, but there’s usually a cap involved. If you’re making a big-ticket purchase, then this could very well be the best card to use (provided you don’t mind waiting up to 14 months for the miles to be credited!).

A useful card to have, if nothing else.

How many NTB customers are there. Almost everyone should have the PPV right?

I need some more miles. When are all those banks that I cancelled more than 12 months ago going to have some decent sign up bonuses? OCBC, SC, HSBC, Maybank, DBS. Come on guys give me some incentive to get your cards again!