The Virgin Clubhouse at JFK has all the makings of a great lounge, but is struggling to cope with a guest list longer than Taylor Swift's ex-lovers.

Singapore Airlines has a rather interesting lounge situation at New York JFK- instead of a single lounge, it uses three.

If you’re a KrisFlyer Elite Gold or Star Gold passenger, it’s the dismal Air India Lounge for you. PPS Club and Business Class passengers get the slightly better Wingtips Lounge. And if you’re a Solitaire PPS Club or Suites passenger, you get the holy grail: the Virgin Atlantic Clubhouse.

Or at least it used to be. Virgin Atlantic recently outsourced the management of its lounges to Plaza Premium, who have in turn expanded the guestlist through partnerships with American Express and Capital One. With more passengers taking to the skies every month, something’s got to give, and that something, unfortunately, is the overall guest experience.

The Virgin Atlantic Clubhouse at JFK is located post-security at the A-concourse, above boarding gates A4 and A5. Operating hours are 0500 to 0830 hours and 1400 to 2230 hours daily.

That’s a very long guestlist indeed, and believe me, it shows. What was once a nice, quiet lounge is often packed to the rafters in the evenings, which means longer wait times for tables, food, and showers.

While the furniture looks eye-catching, in truth it often goes for form over function. Few of the chairs are well-suited for work, and the vibe reminds me something of a W Hotel. I’d have loved to see some productivity pods, but I guess that might be something of a buzzkill in the party-like atmosphere.

Other nifty touches include a pool table…

…as well as a spa and hair salon, still closed at the time of my visit. Virgin Atlantic customers are entitled to a free 15-minute treatment, which can be a chair massage or a quick hair styling session. Singapore Airlines passengers and those accessing the lounge via credit cards are not entitled to complimentary treatments.

The lounge enjoys tarmac views of the A gates, through which most of Virgin’s departures operate.

There weren’t any dedicated rest areas, but in any case, this isn’t the quietest of lounges. There were constant boarding announcements which disrupted the ambience. Would it be so hard to make it a silent lounge where people are responsible for catching their own flights? 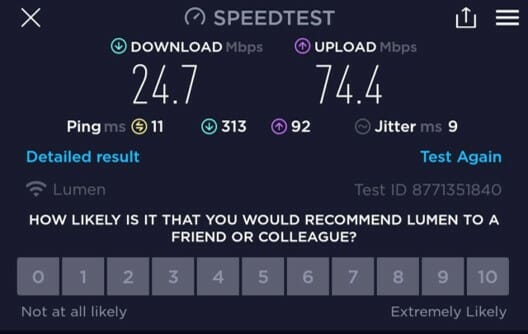 The Wi-Fi network in the lounge clocked in at 25 Mbps down and 74 Mbps up, which would be more than adequate for video calling and streaming.

Power outlets are scattered throughout the lounge, though not nearly as many as I would have liked (they’re lacking in the dining area). Outlets are affixed to the walls instead of built into table tops like more modern lounges, which means a lot of wires running around the floor.

Outlets accept Type A and B plugs, and have two USB Type-A charging ports each.

The Virgin Atlantic Clubhouse JFK offers dine-on-demand for all guests, regardless of how they gained access (there was a period where they tried to restrict this for credit card guests, but that’s no longer happening to the best of my knowledge).

Ordering takes place from a digital menu, with a wide selection of appetisers, mains and desserts plus kids’ options.

A breakfast menu is also served during the morning hours. 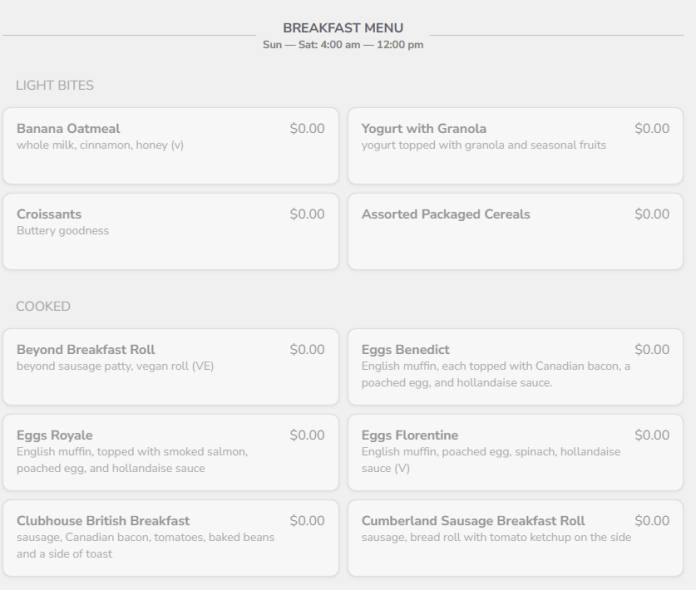 I had the opportunity to try a few items during my visit, which generally came within 20 minutes of ordering- at least for the first batch. As the lounge got more and more crowded, the wait times increased, and items started to be forgotten.

The tomato basil soup was good and hearty, though I felt it would have benefitted from the addition of some roasted chili flakes.

The roasted salmon and quinoa was actually served with cous cous instead of quinoa. I didn’t mind; the cous cous was delicious. The salmon fillet, however, was thin and dried out.

The sweet and sticky pork belly suffered the same fate. Pork belly should be a very forgiving meat, but this was so overcooked it was difficult to cut even with a knife.

The Beyond burger reminded me why fake meat won’t be served up in steakhouses anytime soon. It’s the culinary uncanny valley, with a spongy patty whose taste and texture is nothing like the real thing (I’m a bigger fan of Impossible meat). Much better were the thick-cut steak fries, though, and I could easily eat a whole tub of them.

The chipotle chicken burger was, you guessed it, dry again, meaning it wasn’t actually a much superior option to Beyond.

I will say the desserts still hit the spot, in particular the sticky toffee pudding with vanilla ice cream.

On the whole, the dining room had more misses than hits. I don’t know whether I just caught the kitchen on an off-day, but this wasn’t anywhere close to the meals I’ve had in at the United Polaris Lounge or Qatar Premium Lounge. I can’t help but think the expanded access has something to do with it, as it’s just not possible to maintain quality with so many orders flying in.

In terms of drinks, the fully-tended bar is ready to whip up all sorts of cocktails or pour you a glass of wine or champagne.

You can also enjoy a range of cocktails from the bar, including Virgin’s signature “Readhead Prosecco”, or creations from Employees Only, a swanky cocktail bar located in the West Village. 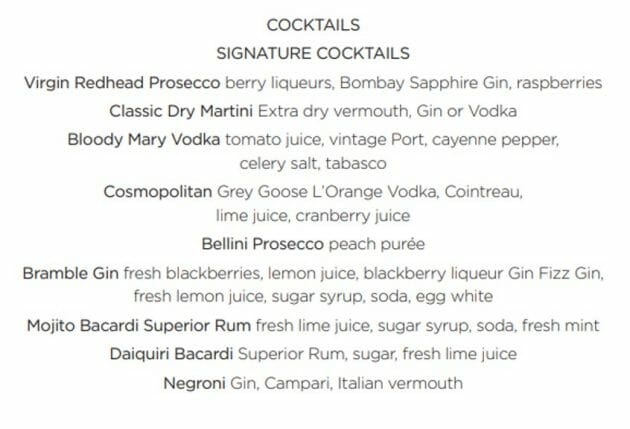 I found myself deliberately holding back, however, since I knew there’d be Dom and Krug on the plane. It’d be a completely different matter entirely if I were flying in Business Class…

A mood-lit passageway brings you to the lounge’s three showers and five restrooms, all gender-neutral.

Shower rooms aren’t the most aesthetically-pleasing; the wall tiles remind me of a subway (or perhaps that’s the intention) and the wall-hung toilet looks like something out of a public restroom.

Moreover, the fact there wasn’t a dedicated shower attendant means you were never sure whether you were getting a freshly-cleaned room. You just popped in and hoped for the best. I should also mention that the towels didn’t come wrapped in plastic, so there was no knowing if the previous person messed with them in some way.

Since the faucet handle was busted in my shower, I couldn’t adjust the temperature properly and had to make do with lukewarm water.

Shower amenities were by Aveda and REN Skincare, provided in wall-mounted bulk-sized bottles.

I arrived at the lounge at around 5 p.m, when it was already moderately crowded. I was hoping it might clear out a bit as flights departed, but fat chance, it just got worse and worse. It became increasingly difficult to get the attention of staff, food and drink orders were significantly delayed, and the toilet conditions deteriorated.

Is it really that much of a surprise, though? It’s not just the many airline partnerships, it’s fact that Plaza Premium has thrown open the doors to credit card access. I’m sure I’d appreciate it if the roles were reversed, but the upshot is that the Virgin Clubhouse is nowhere near an exclusive experience anymore. You simply can’t keep cramming more and more people into a fixed space and not expect the service to decline.

The Virgin Atlantic Clubhouse JFK has all the ingredients of a great lounge, but it can only deliver so much when at maximum capacity. In a way, it’s the Centurion Lounge dilemma- an otherwise solid hard product that struggles with a guestlist way too long.

Unless management takes immediate steps to regulate overcrowding, I fear it’s only going to get worse in the months to come.

Sounds like you had the same shower stall as me when I visited in end Oct.
Horrible experience, esp for Suites passengers.

Form over function — exactly. The chairs weren’t particularly comfortable, and a couple of the plug points I tried were loose. The a la carte food is nice in theory, but the last couple of times it wasn’t great (although the pork belly you had looks delicious). Anyway, I guess I won’t be seeing its hallowed walls any more since I’m not Solitaire

i did not check out the centurion lounge because i was scared off by all the horror stories about how crowded it is.

Funny that anyone with a random credit card dragon pass can get in, while a QPPS in SQ biz will get sent away for not being qualified enough.

That’s weird, I had access to this lounge earlier this year in June as an SQ J passenger with no PPS status. I wonder if they only just changed the policy.

The lounge is gorgeous and the food and drink offerings are above average, but the table service concept was brought to its knees by the staffing shortages; you could be waiting almost half an hour for your soup or cocktail to arrive.

Yes, they changed the policy recently. Prior to August you could access this as a pps or even kf gold

Yeah I think they have their priorities wrong here, they’ll let in a random dragon pass holder but turn away a PPS holder travelling in business? I’d be pretty pissed if that was me haha

All about the Benjamins. Presumably Sia isn’t willing to pay as much as dragonpass is!