From now till 31 December, stack KrisShopper, Kris+ and credit card miles to earn up to 12.5 mpd on KrisShop purchases.

Singapore Airlines has extended its bonus miles offer for customers who shop on KrisShop via the Kris+ app, which stacks with KrisShopper bonuses and credit card miles for a combined earn rate of up to 12.5 mpd.

This deal, which was originally set to lapse on 30 November 2022, has now been extended till 31 December 2022. It’s slightly lower than the 15.5 mpd earn rate we saw up till end August, but is still a generous offer nonetheless.

Here’s how to achieve that rate.

Earn up to 4 mpd from KrisShopper

Joining Krisshopper should be a no-brainer, since even the entry-level, no-spend-required KrisShopper Member tier earns more miles (2 mpd) than a non-KrisShopper customer (1.5 mpd).

The earn rate for KrisShopper members will increase as they move up the ranks, maxing out at 4 mpd for Ambassadors.

Hopefully you’ll have taken advantage of the previous status match, which offered KrisFlyer Elite and PPS Club members instant KrisShopper status for 12 months as per the table below:

Earn 4.5 mpd from KrisShop on Kris+

KrisShopper customers who shop on KrisShop via Kris+ will earn a bonus 4.5 mpd. 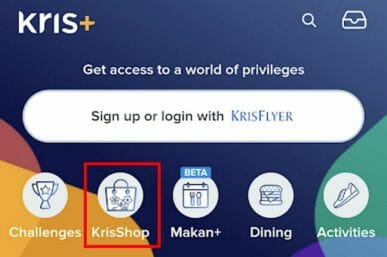 Here’s a quick reminder of the differences between shopping on KrisShop.com and KrisShop on Kris+.

Checkouts on Kris+ must be done via in-app payments, using American Express, Mastercard or Visa cards linked to Apple Pay or Google Pay.

Don’t forget to transfer any miles earned on Kris+ to your KrisFlyer account immediately. If you wait more than seven days, these miles will be stuck inside Kris+, where they expire after six months, and can only be spent at a puny 0.67 cents each!

Earn up to 4 mpd from credit cards

KrisShop purchases with code as MCC 5309 Duty Free Stores. Using the following cards will earn you an additional 2-4 mpd.

Do note the distinction between KrisShop.com and KrisShop on Kris+ for the Citi Rewards Card and AMEX KrisFlyer cards.

While the Citi Rewards Card will earn 4 mpd on KrisShop.com, it will only earn 0.4 mpd on KrisShop on Kris+. That’s because checkouts on Kris+ must be done via in-app payments, using a card linked to Apple Pay or Google Pay. This is excluded from the Citi Reward Card’s 4 mpd bonus (I’ve heard that pairing it with Amaze solves the problem though, but don’t quote me on that).

There is no such distinction for the rest of the cards.

So putting it all together, a KrisShopper member would earn anywhere from 10.5 to 12.5 mpd for KrisShop purchases, as summarised below.

From now till 31 December 2022, KrisShop customers can earn up to 12.5 mpd on KrisShop purchases by signing up for KrisShopper, shopping via Kris+, and using the right credit card for their purchases. It’s not as generous as the previous 15.5 mpd offer, but a very tidy haul all things considered.

Just note that KrisShop prices may be inflated compared to shopping elsewhere, so be sure to comparison shop and make sure the bonus miles justify the price difference (if any).

I have setup my ambassador tier, linked krisflyer to kris+, bought stuff to be delivered on plane via kris+….. I have yet to see any extra miles anywhere!

This $h*t is so complicated!!

These extremely complex inflationary promos make me dislike KF and make a wide berth around KrisShop since I know I am being ripped off unless I jump through all the hoops. No thanks.

More expensive to get the stuff I want on Krishop or Kris+
really inflated prices for KF miles!

Over priced stuff with no real value.

btw, what is the difference between krisshop and ishopchangi?

get upgraded to Krisshopper Icon with UOB KF cards
https://www.krisshop.com/en/store/krisshopperuob

thanks! will publish something tomorrow.

Can they stop calling it a limited promo. It’s been on for the entire year.