Ho ho ho! It’s that time of the year again, and sounds of festive cheer are in the air. Or maybe that’s just the sound of holiday tunes being piped in stores. Whatever the case, hopefully this post can help put you in the holiday mood.

I’ve been trying out this mode of payment recently and have been successfully gaining 4 miles per dollar on it for some time now. Didn’t think to write about it earlier because I was pretty late to the party myself, it’s pretty troublesome, and I only see it as useful for Singtel users, but if there’s anything recent news has taught me, it’s there there are plenty of Singtel users in Singapore.

Also, what are MileLion readers if not brave folk ready to jump through hoops in order to maximise mileage gain?

What is (Singtel) Dash?

Dash can be a rather confusing product, mainly because it includes multiple services like a bank account, personal loans and insurance. What’s immediately relevant here is Singtel Dash, a mobile app [Android | iOS] that acts as a mobile wallet. Think of it like an EZ-Link card on your phone that you can use to make payments (though somewhat more limited).

The website states that it is accepted at “20,000 stores and counting”, so if you happen to see Dash being accepted where you buy stuff, you’re all set!

(Unfortunately, it’s not quite as simple as that – coverage can still pretty limited; I was disappointed to find out that FairPrice Finest outlets are excluded, for instance!)

If you’re a Singtel user and have an NFC-enabled phone (for most people – the more advanced Android phones), you can even get a Singtel Transit NFC SIM to use Dash to tap for public transport. You can also tap to pay at Dash merchants (regardless of telco), though iPhone users have to manually input a counter code, which slows down the process noticeably.

How do I get 4 miles per dollar via Dash?

Singtel Dash is essentially a prepaid account that you need to top up before use. Most people would do so directly from their bank accounts, but Singtel users also get the option of topping up via Singtel bill (edit: this is capped at $200 per monthly billing cycle).

This allows you to effectively channel a chunk of your spending to your Singtel bill, and since Singtel allows you to make payments via their website (or through their app), which codes as online spend… 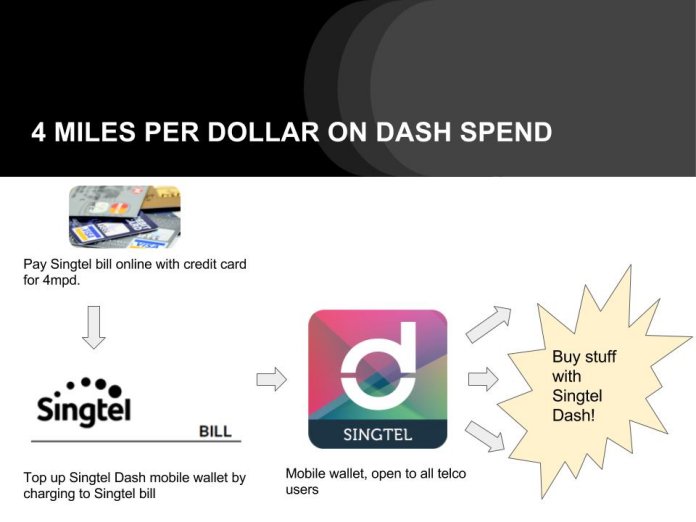 Now, if only there were some way to get 4mpd on online spend… Hmm…

(You might also want to take a look at the crowdsourced Google Spreadsheet to check which cards have been successfully clocking miles on online payments to Singtel.)

Isn’t this a whole lot of trouble?

Yes, it is. This is especially so for me since I’m on an iPhone, and payments can be painfully slow when there’s a line behind me at the cashier. Still, we’ve gotta do what we gotta do, right?

I also prefer not to leave extra funds in the mobile wallet, so I have to top it up every time I make a Dash purchase. It’s not that difficult, but the extra steps can get annoying.

(To be frank, I’m still evaluating if I want to continue doing this in the long run. Still, it seems to be a more painless procedure for Android users, especially if you’re willing to leave funds in the mobile wallet.)

Other deals on Dash

One thing that’s kept me coming back to Dash is the abundance of promotional deals it’s been running. For instance, they’re currently offering 5% cashback on a number of merchants (e.g. FairPrice, taxis) – coupled with the 4 miles per dollar (which I value at about 2¢ each) I currently get about a 13% return of value on my Dash purchases.

If you happen to spend a fair bit of money at merchants that accept Dash as payment (e.g. FairPrice), this could be one way to gain 4mpd on that expenditure, if you’re a Singtel user (edit: up to $200 per month). The additional promotional deals don’t hurt, either.

Admittedly, it’s rather troublesome, especially if you’re an iPhone user. However, there’s no set up cost, so maybe you’d like to get the app [Android | iOS] and see if you think it’s worth the effort?

Louis Tan
Louis believes he caught the premium travel bug after attaining KrisFlyer Elite Gold and occasionally being upgraded while shuttling between the UK, Singapore and Japan (in economy class). These travels have led to a wonderful marriage, as well as a burning desire to avoid flying long-haul economy. He travels with a gryphon plush toy, Griffles, which often stands in for him in vacation photos. Griffles continues to amuse (and confuse) air stewardesses, hotel staff and just about everybody else, all around the world.
Previous articleThe $100 Bangkok Trip
Next articleUOB PRVI Miles new targeted 10K miles sign up promotion

Passengers with travel up till 31 December 2020 can now get a full refund (or bonus flight credits), provided they purchased tickets before 16 March 2020.
Read more

KrisPay Spin & Win promotion: Get up to 2,100 bonus KrisPay miles when you top-up

Actually….
if you use SC dash, you can transfer the cash to your SC checking account and draw the money out.

Good to know! Something to explore further…

Can’t you just use Samsung pay with Citi rewards? It will give you 10 Citi points which equals to 4 miles right?

Because of (2), I unfortunately never got to benefit from this particular avenue. =(

Because of (1), it’s probably not worth writing about at this point…

Thanks for highlighting the limitation! Obviously I’ve not experimented deeply enough. Will update the post to reflect this.

Hi there! I have been using Dash for quite some time now and had clarified with Singtel that topping up through Singtel bill has no cap. (Has done top up above SGD200)

Not sure if I misunderstood the cap of $200 refers to when paying via CC (miles earning cap) or top up bill cap.

That’s interesting… do you just top up via the app? I get an error message (“You have $0.0 remaining in your bill balance. Please select a top-up amount of a lower value and try again.”)

The FAQ also states that “You can top up a maximum of $200 monthly as per your billing cycle.” If there’s some way to get around this, I’d love to find out how! =D

keep repeating $200?
whats the step you did?
interesting finding

Any updates??? seems like you havent come back to update haha

There’ve been a number of updates since this was first posted (e.g. ability to top up $200/month directly via card). Worth exploring more; right now I haven’t figured out which cards get points for said top up.

I’m feeling a bit slow… how’s that any better than being able to FAST transfer to bank account (another recent development, that I actually prefer)? Or is it just that it’s easier to DASH for 5% cashback at merchants now? Even so, wasn’t NFC payment already available previously, for the eligible merchants?

(I don’t use Android, so unfortunately unable to make use of it.)

so what I’m saying is, you no longer have to find DASH merchant to make payment. All you need is a Visa payWave merchant where you can use your NFC-enabled phone OR make eComm Visa transactions. This was a recent development. So you can top up with whatever way there is and spend make this your general spend card ala FEVO. Of course FAST is also a brilliant 🙂

Not necessarily the case, I tried using it online (Visa virtual) and at a paywave terminal (NFC), both cases it didn’t work. Have yet to find a official dash merchant though to make sure it’s not an issue with my phone/dash setup

Btw have tested top-ups on Citi Rewards MC and Visa, both did not award 10X. Was a long shot, but I thought since the folks at HWZ reported that MC awarded 10X for Singtel bill payment, it might have worked for Dash…

What about wwmc? If not worst case its hsbc revo. I tried payment at a VpW merchant which is non dash yest and it worked fine for me. Hmm fairprice is a dash merchant. You may want to try that.

If you find a paywave merchant there are at least 2 other entry level cards that give you 4mpd anyway. Don’t see your point.

I know one of them is the uob visa sig. But im never on uob due to the hoops you jump through so never a fan of uob cards. The t&cs too big a turn off. Whats the other entry level cards you talking about? Im all for options for people to choose which works better for them.