Welcome to the Hotel California.

Some airport hotels are great architectural marvels, inspiring in their form and function. Others are passable relics of grandeur long passed. And then there’s the airport motel.

In the States, you’re likely to find airport motels clustered around every major airport. Most of these are run by big chains like Motel 6, Days Inn, Comfort Inn, Quality Inn, Super 8, Travelodge and other names that evoke thoughts of frugality, function and wearing slippers when you walk around the room.

The Red Roof Inn is another operator of budget motels.Sure, the marketing photos will have you believe it’s some sort of idyllic retreat.

But in reality it’s more like one of those places where Walt and Jesse hide out on Breaking Bad. You’ll often find Red Roof Inns and other budget chains located near highway rest stops, airports and inner city areas. Basically- the kind of place you don’t want to be outside at night.

However, I needed somewhere to crash for 8 hours during my transit from IAH to MIA. And the Red Roof Inn was only $62 a night, plus I got some cashback by using Shopback on top of that. And it allowed me to live out my hardboiled detective fantasies. So I put on my most noir-ish trenchcoat and went with it

I cleared immigration in record time thanks to my shiny new Global Entry. To be fair, you don’t really need it if you’re from Singapore because Singaporeans can use their APEC business travel card to skip the queues. Even if you don’t have an APEC card, you can use the Automated Passport Control kiosks if you’re from a Visa Waiver program country.

But both the APEC and APC methods still require you to talk to a CBP agent before you get into the country. And I don’t know about you, but any opportunity to avoid social contact is a plus in my book, especially when it’s with a surly CBP agent who strongly suspects that this well-built Chinese man infront of him is some sort of sleeper agent.

With Global Entry, everything is DIY. The machine prints out a slip which you pass to the agent before you exit with no conversation. And after you collect your bags, you have a special line for customs clearance as well. The other benefit to getting Global Entry is that it allows you to enrol in TSA Precheck, which can be a big timesaver if you travel domestically in the US a lot.

Once I picked up my bags, I called the Red Roof Inn to arrange a shuttle pickup. They confirmed my reservation details with me and 20 minutes later a shuttle with Red Roof Inn branding pulled up to the curb of the pickup area. It was about a 10 minute ride to the motel. Even the exterior of the Red Roof Inn conjures images of the Bates Motel. I made a mental note to ensure my last will and testimony was up to date (I’m leaving The Milelion to the first person who can write a haiku about 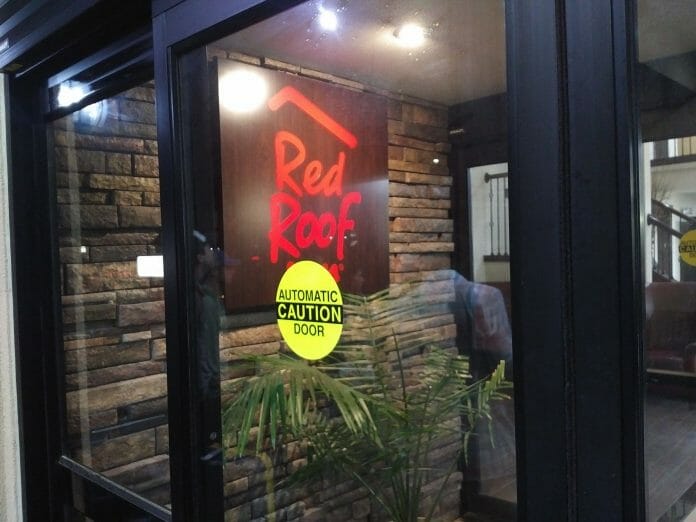 I love how the litigious environment in the US obliges businesses to put up warning signs everywhere, like this nifty one on the automatic door. Because you know, danger. (It’s also amusing how every TV advertisement in the States that has the protagonist doing something vaguely interesting has a disclaimer at the bottom saying; Professional actor, do not attempt)

At check in, I asked if I could pay for the room in cash (to avoid incurring foreign transaction fees on my card) and was greeted with that suspicious look usually reserved for men who visit adult video stores. The clerk tried to fiddle with the computer but ended up taking so long I told her to forget it. Before I got my key, I asked her what time check out was, half hoping she’d say “you can check out any time you like” so I could make a pop culture reference. “11am” was the answer.

My room was on the first floor, just down the corridor. First impressions of the room were positive, although part of me felt that I’d do well not to use a blacklight. 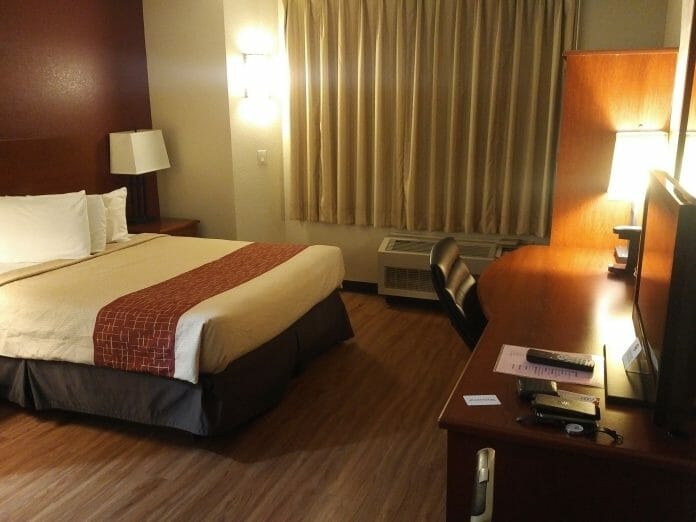 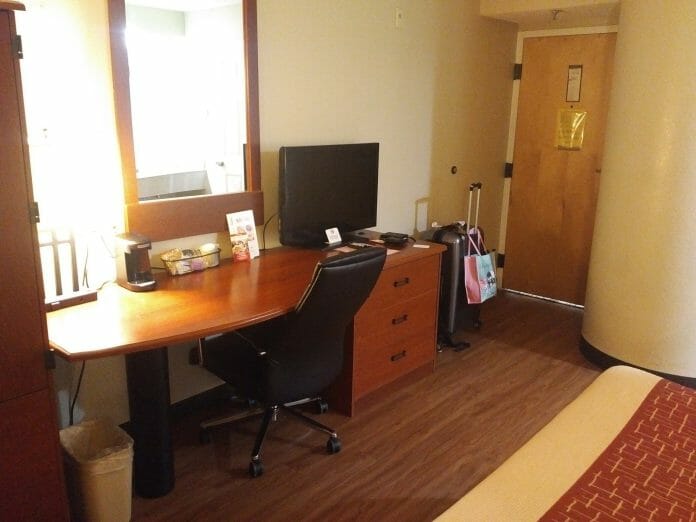 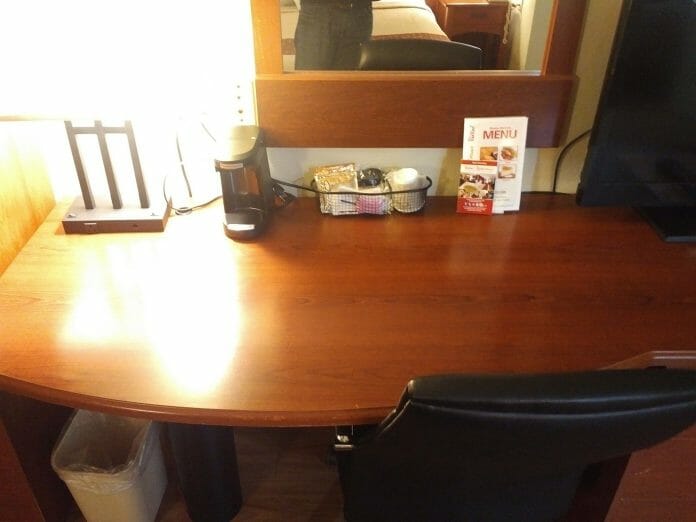 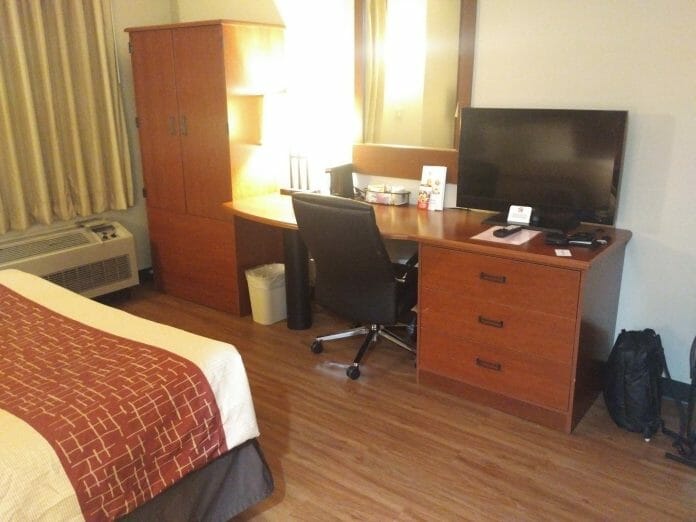 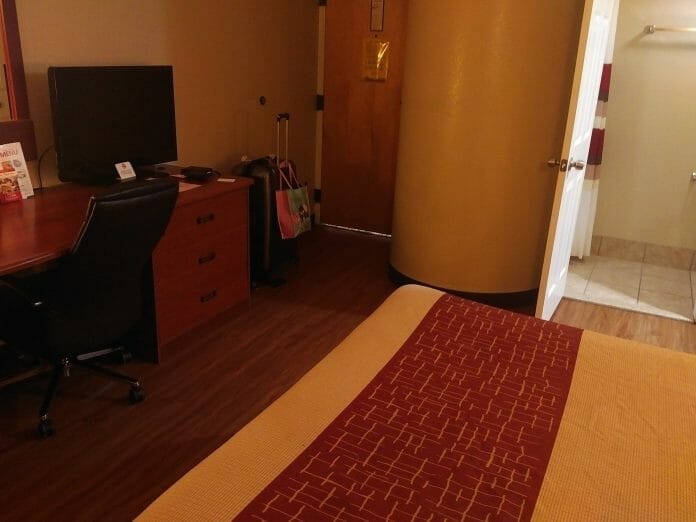 The air conditioner was on the wall and competed with the sound of taking off jumbo jets. It had precisely two modes: arctic winter or heat blast. 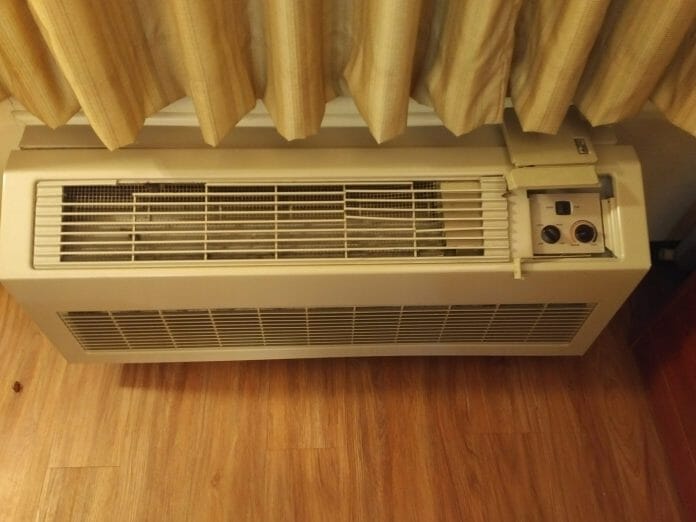 The sink is outside the bathroom, next to the bed. Basic toiletries were provided. I’m glad they used disposable cups because I’d sure as heck not want to use anything else here. 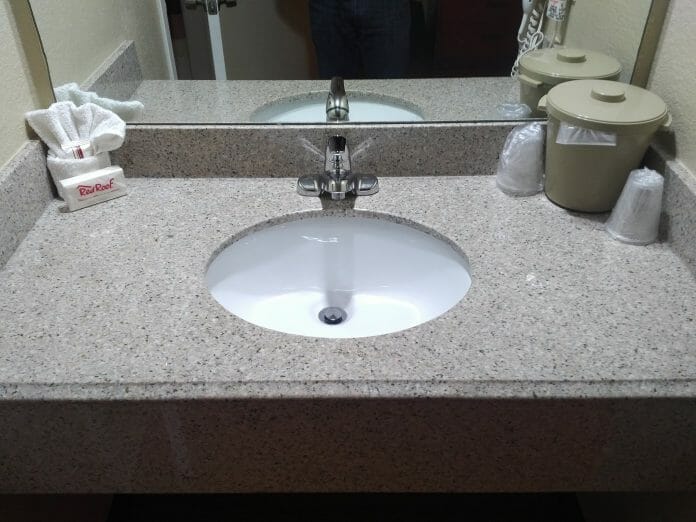 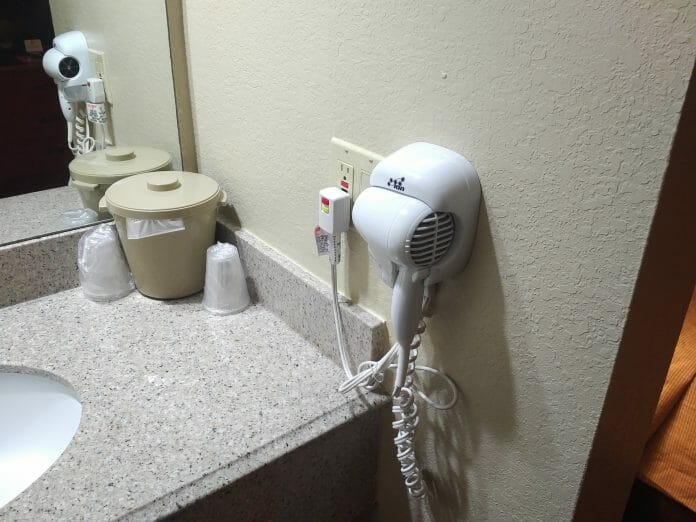 There’s a tiny shower and toilet.  I was confused- how were you supposed to dissolve bodies from drug deals gone wrong if you don’t have a tub? 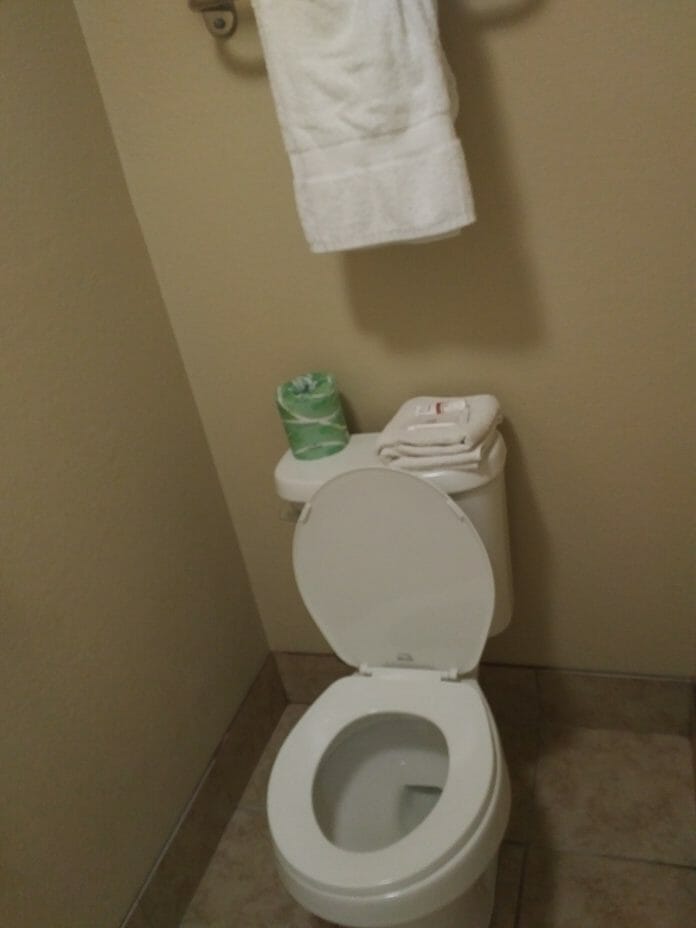 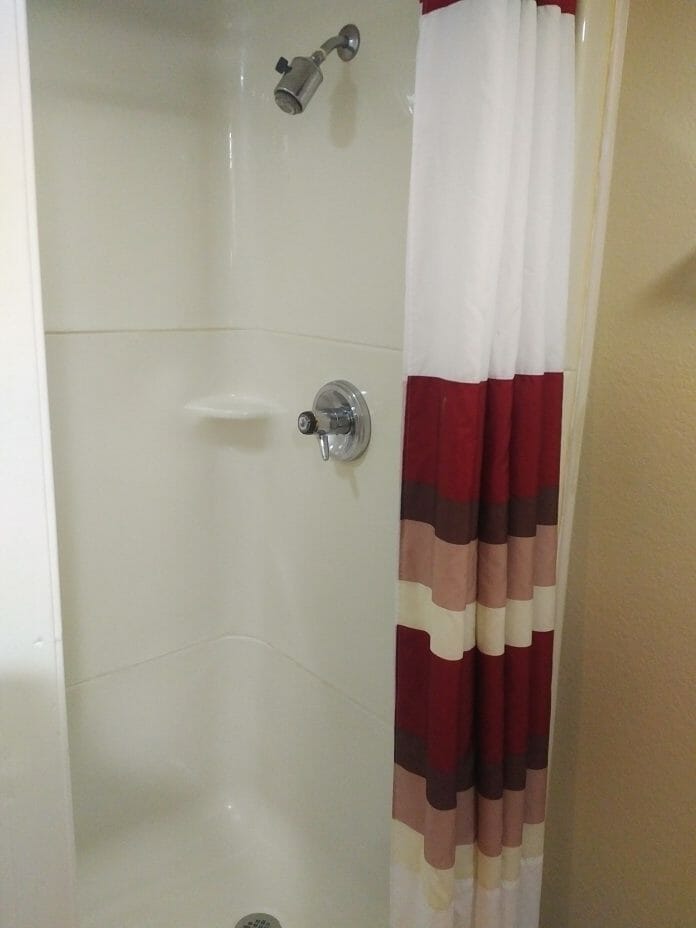 I bathed quickly, trying my best not to open my mouth. To my pleasant surprise, the tap water didn’t Flint Michigan me.

As I stepped out of the shower and dried my hair, I noticed I had a visitor. Or at least, had a visitor. He was curled up next to the A/C, probably enjoying some of that arctic blast. 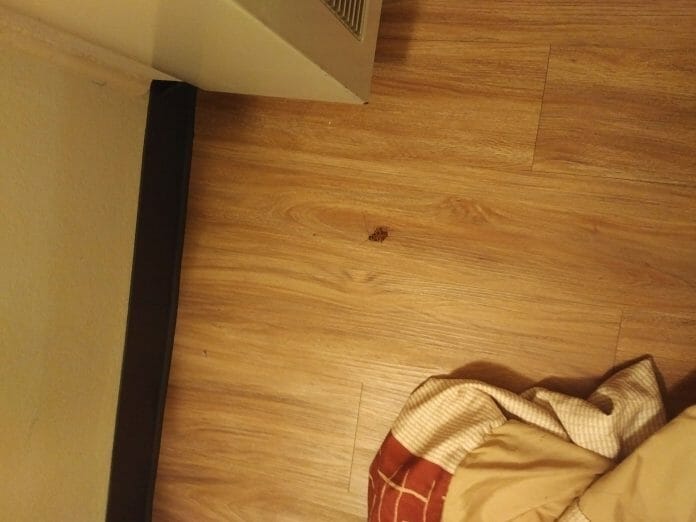 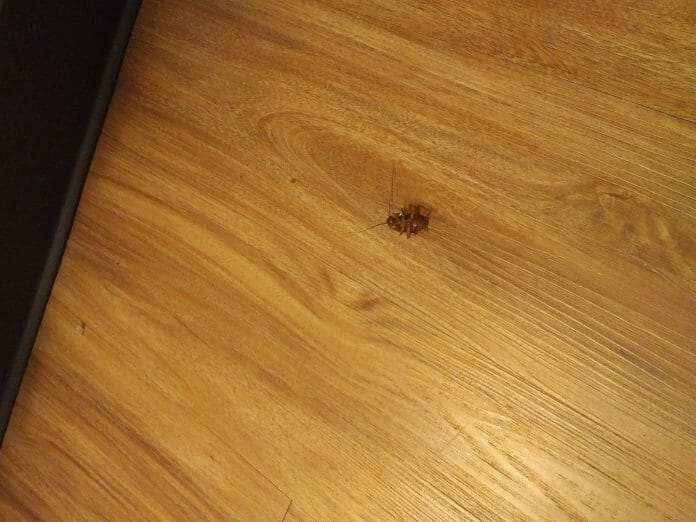 I considered calling the front desk to make sure they didn’t charge me extra for an additional guest. But it reassured me to know I was in good company. If you read the reviews for this property on Yelp (which, in retrospect, I probably should have), you’ll find a veritable gallery of roach pics. 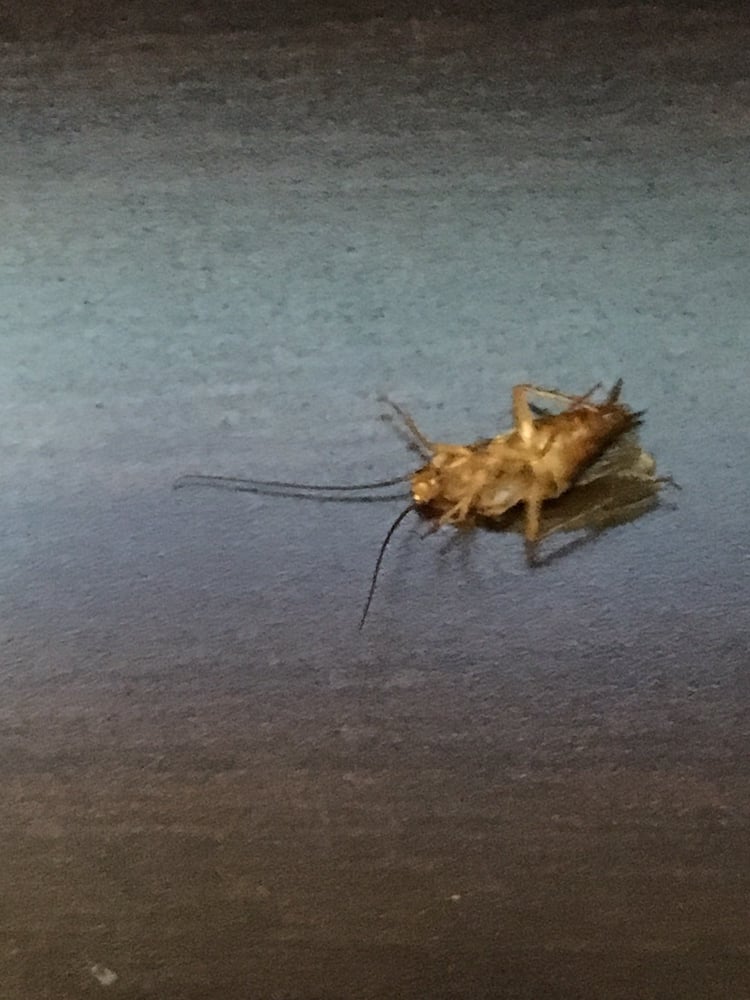 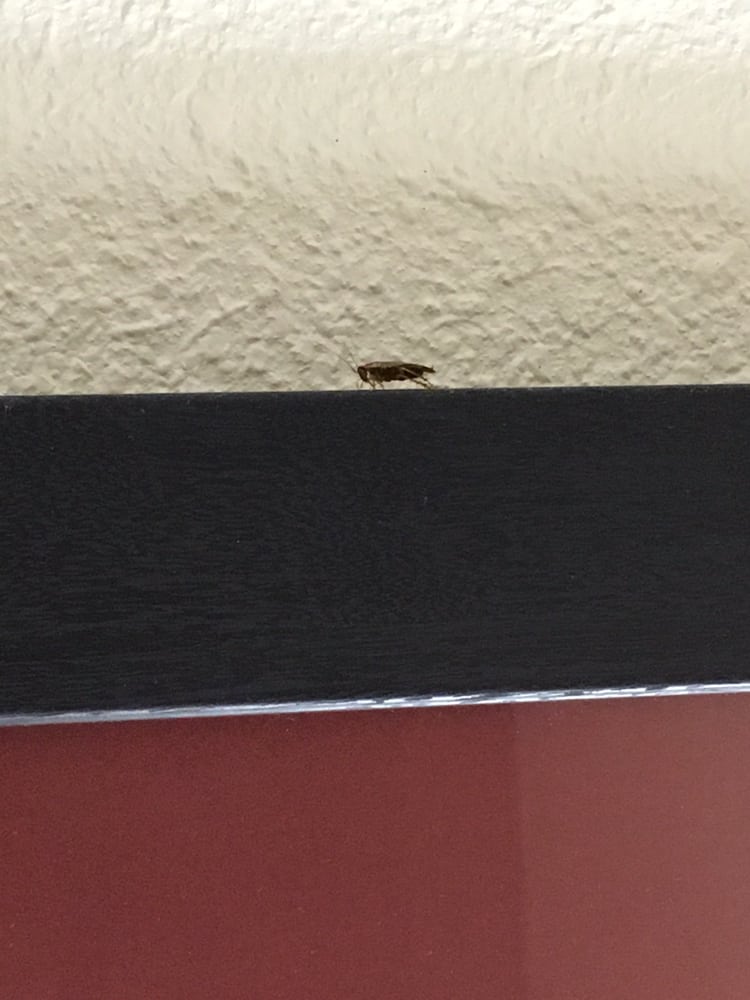 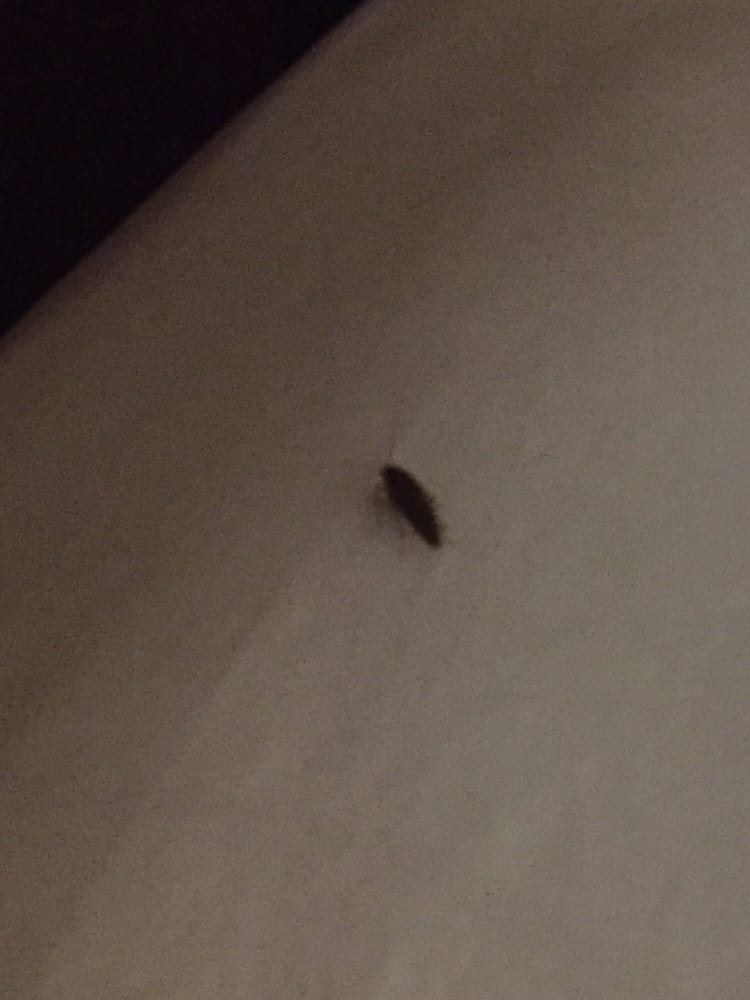 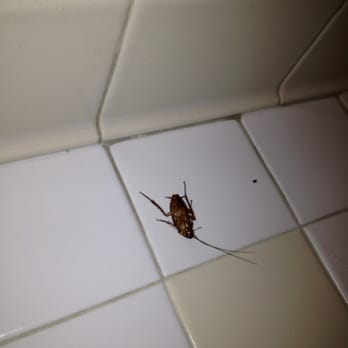 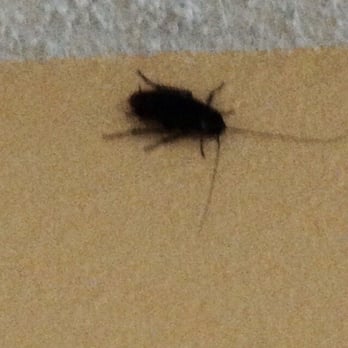 The presence of roaches made me hypervigilant to zip up all my bags and place them on the table.

I carefully inspected the bed for telltale signs of bedbugs. Not seeing any, I gingerly crawled in and made a mental note to bathe again the first thing tomorrow morning.

As I dozed, I listened intently for gunshots, or at least creaky bedsprings. Instead all I heard was the reassuring scuttle of something moving beneath the bed. I did not investigate.

My flight the next morning left at 7am, so I caught the 530am shuttle to the terminal. Breakfast only starts at 6, so I didn’t have a chance to sample what I’m sure must be the gastronomic delights this place had to offer.

But on the plus side, I didn’t get typhoid. And did I mention it’s only $62 a night?

Roaches scare me to death ..I’m not going to stay there!

Hi I bought you always stay at 5 stars hotel?

yes, when i’m paying with someone else’s money!

62dollars…goodness….not worth the cash back n stay….

Don’t know if you’re still in the US. I saw somebody boasting in HWZ about how easy it is to get a US credit card even without an SSN. Maybe if you have the time or appetite, you can try to get one and post a dummy’s guide for us. Thanks!

i’m back already. i think they’re pulling your leg man. to my knowledge there’s no way to get US credit card without SSN. After all, don’t they run background credit check before issuing? how would they do that if you have no credit history in the US?

I think one of the method is Amex’s global card transfer. Then you leverage on that to build your credit history in the US, and apply for other cards.

It might have been possible in the past. Unless you prove that you are going to be employed in US / earn something there, Amex or any other global bank will not issue you a US card.