Budget carrier Norwegian Airlines has announced that it will start non-stop service between Singapore and London from September this year. 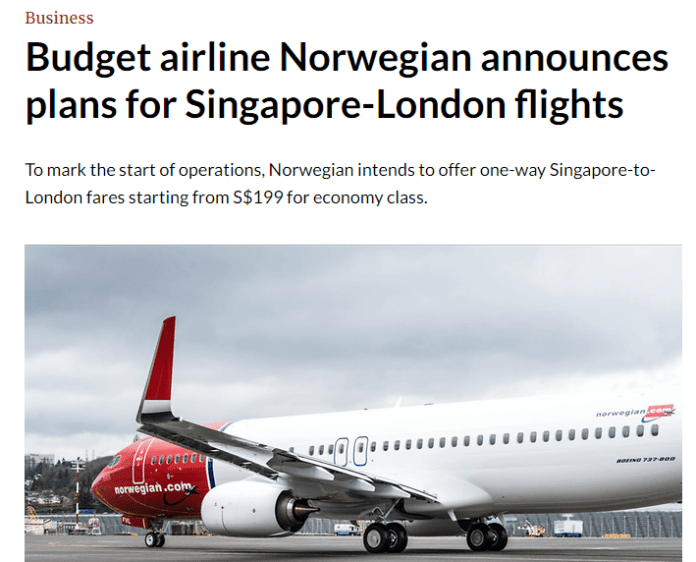 According to the press release, one-way fares from Singapore to London will start at S$199 for economy and S$839 for premium-class with the following schedule 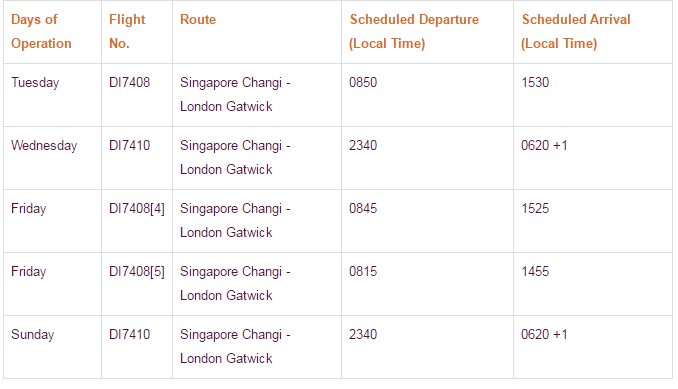 It looks like that the press release was incomplete, as from November 2017 the Friday departure from Singapore moves to a much more sensible 10.50pm slot, allowing you to start your vacation on Friday without taking an additional day of leave.

The route is expected to start in late Sept/early October, but in the meantime, here are a few things you should know about the new Singapore-London route.

You’re flying to Gatwick, not Heathrow 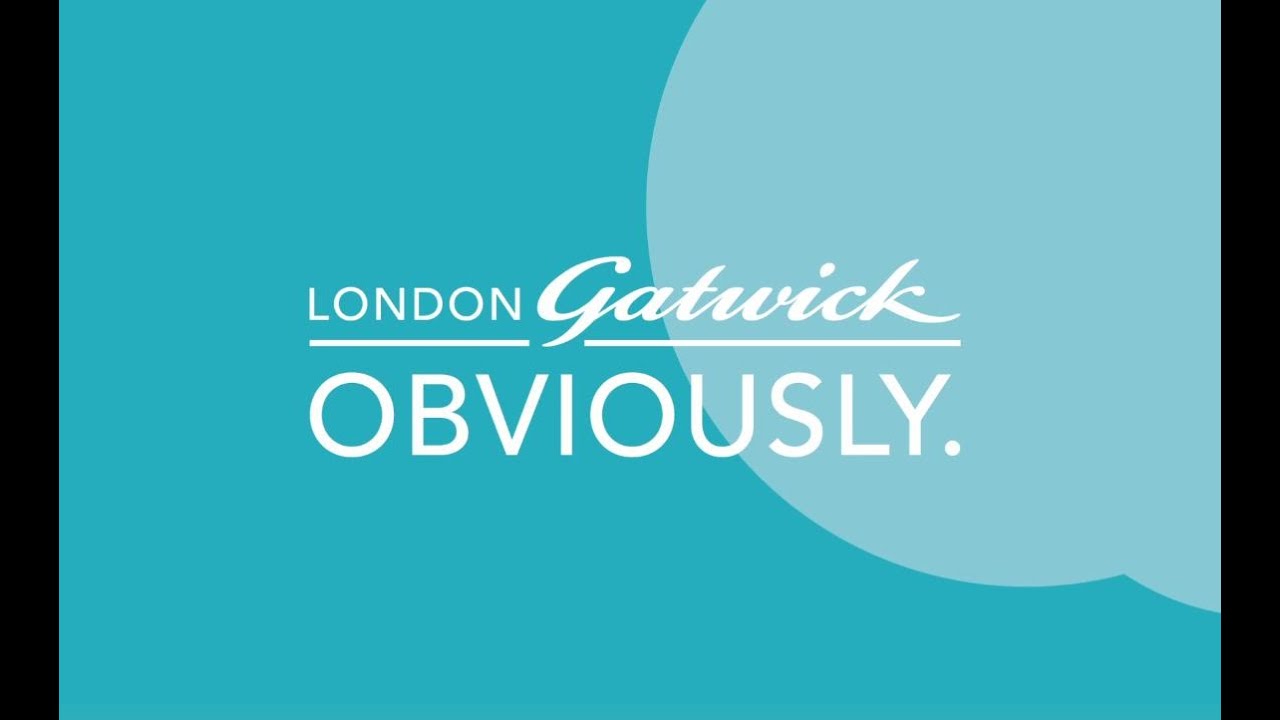 One of the ways that Norwegian can keep prices low(er) is by flying to London Gatwick (LGW) instead of London Heathrow (LHR). LHR is a major international hub and as you can expect, landing slots sell at an obscene premium ($75M for a prime slot, anyone?)

What does that mean for you as a traveler? Well, let’s look at where the two airports are on a map 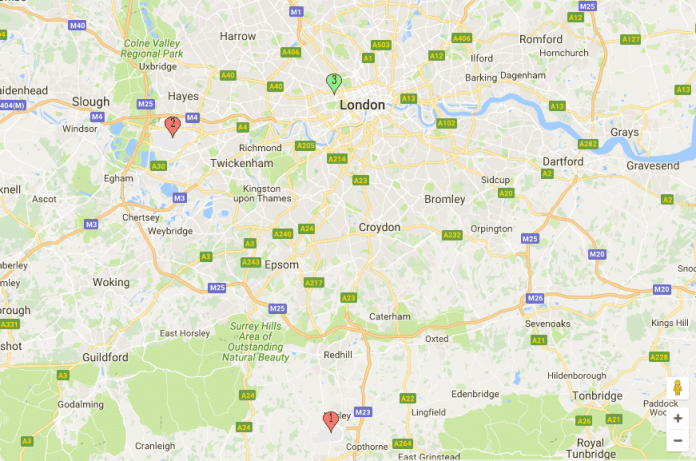 I’m taking Paddington Station as the de facto centre of London for the purposes of this illustration. You’ll see that Heathrow (dot 2 on the map) appears to be closer than Gatwick (dot 1 on the map)

But that’s not the whole story- in terms of public transport (trains in particular), Heathrow and Gatwick have very different options

Heathrow is served by

Gatwick is served by

The biggest difference is there is no tube option for Gatwick (although Oyster cards are accepted for payment). Anecdotal stories on Flyertalk suggest that Gatwick is less congested than Heathrow as well.

Landing at Gatwick also means there will also be implications for Singapore passengers looking to use the Norwegian flight as a means of connecting to the rest of Europe- depending on where your connecting flight departs from, you may need to budget more time or money.

Fortunately, Gatwick has a wide variety of carriers like Ryanair, Vueling, WOW Air and Norwegian Air Shuttle that can connect you to your onward destination, which should minimize the need to change airport.

Norwegian has 5 types of fares 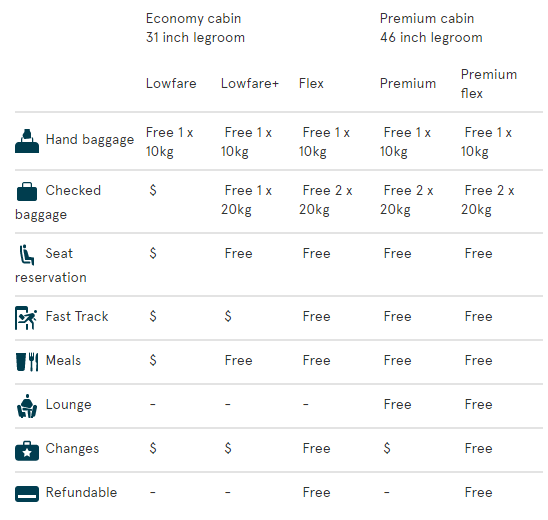 It obviously defeats the purpose of buying a budget airline ticket if you opt for Flex. I mean, SQ’s promotional return economy rates to London are S$1,218, so a one-way Norwegian ticket for S$1,190 just doesn’t make sense. 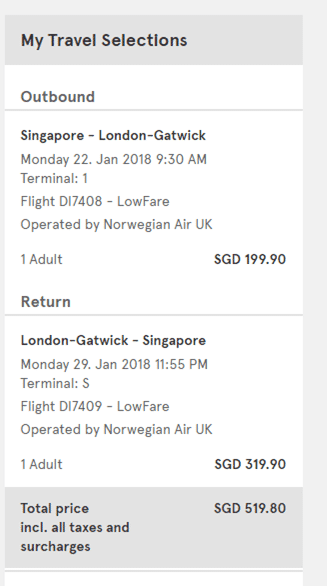 Based on what I can see, the cheapest possible option for a Norwegian round trip to London is about S$520.

In case you were wondering, it will cost you 76,000 Krisflyer miles and ~S$240 of taxes to travel round trip to London in economy. Despite the removal of fuel surcharges during the recent Krisflyer devaluation, surcharges on UK award flights remain high because of the Air Passenger Duty that the UK authorities charge.

From a quick search on Kayak, the cheapest flights to London are with Air France at S$878. These aren’t direct, however, and require a 90 min layover in CDG. Direct flights would start upwards of S$1,200. 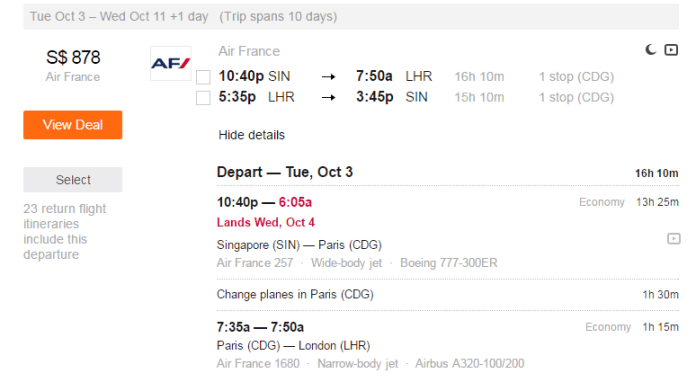 So on the surface, Norwegian appears to be offering a very good deal for a direct flight.

Of course, there’s always the add-ons…

Prepare to be upsold

I suppose it’s part and parcel of opting for a budget carrier that you’ll be upsold left right centre. That said, Norwegian isn’t half as egregious as some other carriers– for starters, none of these add ons are gotcha style pre-selected options. 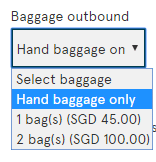 It costs S$45 to select a seat, but interestingly Norwegian does not seem to discriminate among “better” exit row seats and regular seats. It costs you the same amount of money to pre-select a middle seat at the back of a plane as it does an exit row one. 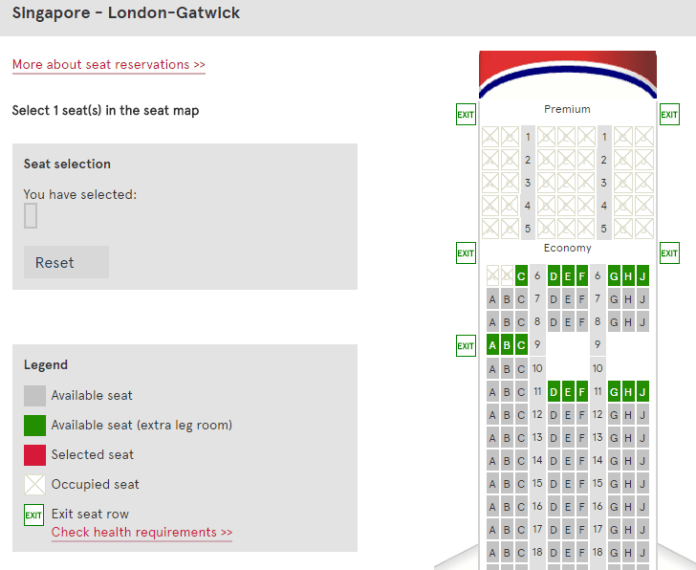 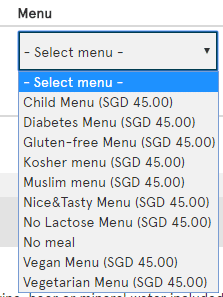 As per the Norwegian website, here’s what you can expect.

You should also be aware that the second “meal” isn’t much of a meal, more like a cold item.

Just what is the Norwegian Air experience like, anyway? 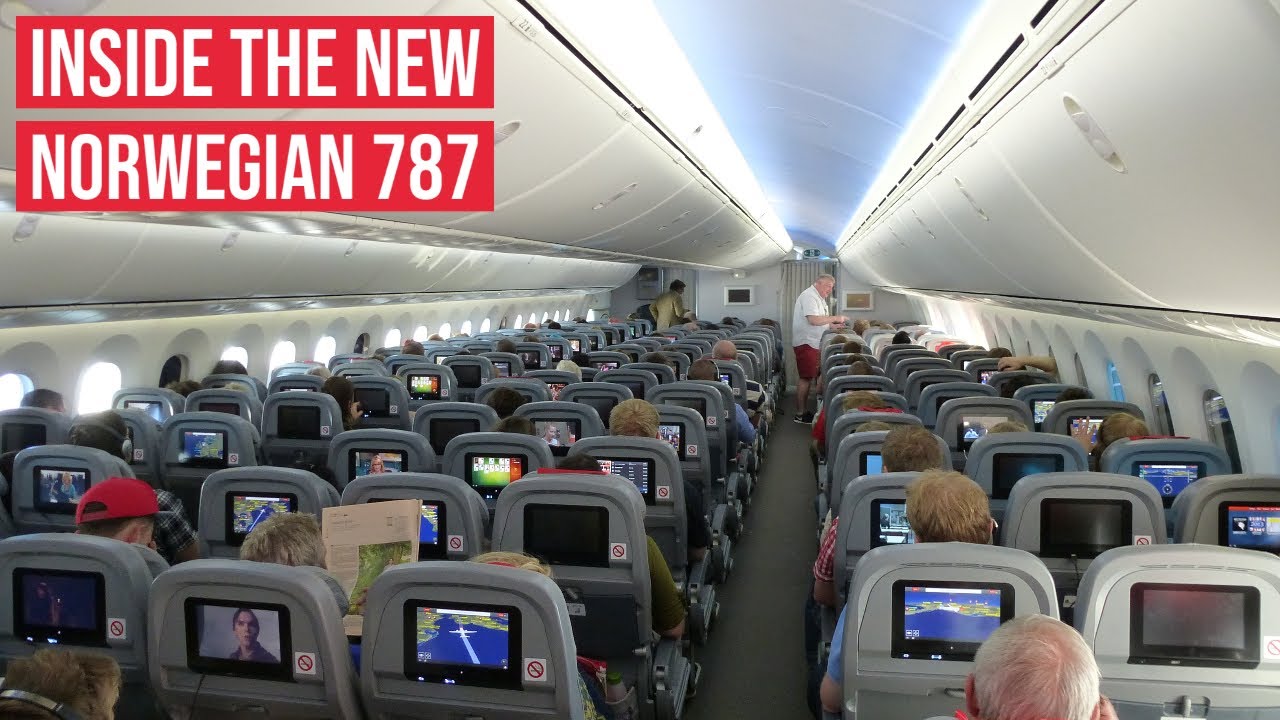 Given that the flight is blocked at 13h 40 mins outbound and 12h 40 mins inbound, I imagine a lot of people want to know what they can expect on the aircraft. Here are trip reports from Norwegian Air’s 787 economy and premium cabins respectively to give you some idea. All seats on the 787 have free IFE and every 3 seats share 2 power sockets. Each seat will also have a USB socket under the IFE screen. Norwegian offers free Wifi on some flights, but it doesn’t look like they’ve extended this to long haul international yet.

Again, it’s difficult to describe the product without actually trying it, but it seems like apart from the absence of a free meal, your cabin experience would not be too different from flying any other full service carrier.

Would I take it?

The flight definitely looks like a spectacular deal to London. 13 hours is a long time, but Norwegian’s cabin doesn’t look particularly punitive in the way that Ryanair or Spirit try to make theirs. In fact, with free IFE and presence of charging outlets, you could argue this would be no different from any other long haul flight. I think it’s great that long haul budget options are finally coming to Singapore, and I hope the additional competition compels SQ/BA to reduce their cheapest economy fares on this route.

That said, I would probably look to redeem miles (for premium cabin travel) to London, then take a cheap flight to Paris to avoid APD on the return leg to Singapore.

Aaron Wong
Aaron founded The Milelion to help people travel better for less and impress chiobu. He was 50% successful.
Previous articleFirst Class for the Family: SQ F Ground Experience and TPR
Next articleAn open letter to the influencers who promoted the Krisflyer UOB account

An Eurostar train trip from London to Paris will always be cheaper and less of a hassle. I wonder if the net savings are worth it though.

Gatwick is a good choice if your accomodation is either in south London or in east London. I wouldn’t recommend it otherwise, although inmigration can be cleared faster than in Heathrow.

“That said, I would probably look to redeem miles (for premium cabin travel) to London, then take a cheap flight to Paris to avoid APD on the return leg to Singapore.”

What does “APD” stand for?

“Fortunately, Gatwick has a wide variety of carriers like Ryanair, Vueling, WOW Air and Norwegian Air Shuttle that can connect you to your onward destination, which should minimize the need to change airport.”

I’m not sure if it’s intended, but it appears to me that you have allowed your bias to demonstrate itself in your choice of airlines to name that fly from Gatwick. ‘Premium’ airlines use Gatwick as a gateway as well, in addition to Heathrow: BA, CX, EK, VS, OS, TK and LX, for instance.

Ah yeah. My point is that if you’re connecting to somewhere else in Europe, you’re likely to be taking a flight on one of these airlines on your second leg. Or maybe ba

hi Aaron
I really enjoy and look forward to your posts. Very systematic and to the point. But saw this on the Norwegian site:

1.99% of the total purchase price (debit cards and Bank Norwegian VISA are exempt).

Thanks! Let me dig into this. I got to the final booking screen for my Singapore to London flight and didn’t see this. Maybe it doesn’t apply to SG. I will confirm

13hrs on a budget airline?? no thank you!

787’s econ seats never generous regardless of airline so from a $ perspective, value is good…same with travelling to Central London from Gatwick where $ count, but I would avoid Paddington unless needing to be at the western side of the west end.

ah, revealing my ignorance about london geography there. would you think the gatwick thing is a significant issue? or practically not much diff from heathrow

I don’t agree with AC. Paddington is very well connected and is where the Heathrow Express goes too. You can quite easily get to anywhere in London from here and is my first choice when heading home if I’m going to East or North West London. Great write up btw, very interesting.

I live in London and much prefer travelling via Gatwick than any other other London airports.
I find Victoria Rail Station more accessible to central London than Paddington.
Don’t use the Gatwick Express – use an ordinary train that goes to Gatwick from Victoria. It will stop at an additional 2 stations on the way, will cost less than half the price – and you can use Oyster – which you can’t on the Express) and will take just 5 minutes longer

thanks for the advice Gary! I haven’t had occasion to fly into Gatwick before but if I do i’ll look at the options you’ve mentioned.

Gatwick is much more inconvenient than Heathrow via Paddington. If you fly Norwegian your experience will be a disaster starting from the awful commute/airport experience.

Norwegian Air will be in which terminal?

Interesting write-up. You mention the Flex price is similar to SQ promo pricing, but must remember that SQ promo pricing doesn’t offer flexibility. So if you may have cause to adjust your plans, DI might be offering a better deal.
That said, having tried another LCC (Scoot) on a 5 hour flight, I shall not be trying DI on a 13 hour one!

Traveling isn’t just about the price to me!

Those are fair points. I think what I was trying to say is that if you travel for leisure you’d have blocked your dates months in advance and therefore flexibility isnt that much of an issue.

[…] Norwegian announced that it will be launching non-stop flights between Singapore and London Gatwick …, it was greeted with much fanfare for everyone here in Singapore. With return fares to London […]

VERY UNRELIABLE! The airline is probably the worst I have ever flown in 15 years. They make Spirit look good. Last flight was a 3 hr delay, the one before that was just canceled the night before. My premium economy seat was broken as well, and the planes are terribly maintained and already look very worn. This airline is a disaster and I advise not to fly them no matter how cheap it is.