Shannen Song reviews Oman's flagship Apex Suites business class product on their 787 Dreamliner. How do the seats, service and food measure up?

Shannen’s quest for premium travel began with a taste of SQ’s First Class and The Private Room, where a good 5 hours was spent in the company of champagne, lobster and Chilean sea bass. Playing with Google Flights and fighting to foot the bill (especially when there are 10X points to be earned) count amongst her newly found passions.

On the first leg from Jakarta to Muscat, I was surprised to see the old business class seats. According to the crew, we were on a leased plane so it had not been fitted with the new Apex suite (reviewed by Lucky here) but were reassured that we would get to enjoy it on the MCT – FRA flight. As I was travelling with my partner, I was happy that there was no privacy screen- however, this would be annoying for solo travellers. The seat was spacious and immediately (as this was my first longhaul business flight) I put the seat into bed mode and exclaimed how amazing it was to be lying flat on a plane. 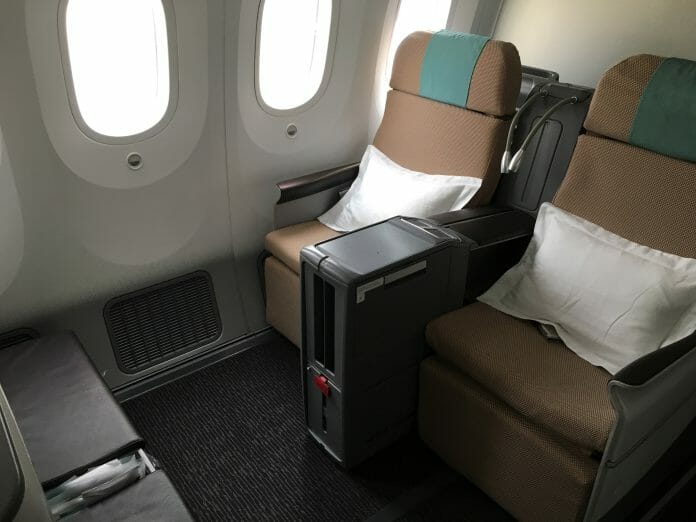 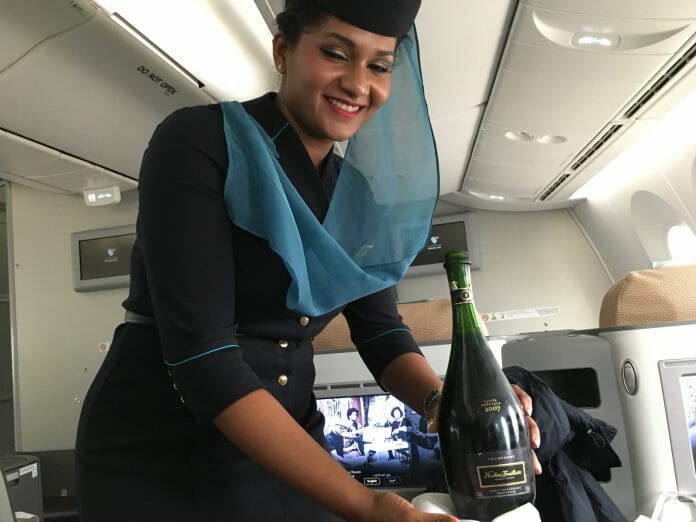 Kimberley, a very lovely and friendly FA, came over to introduce herself and welcome us onboard with Nicolas Feuillatte.

A little while later, amenity kits and headphones were distributed. I didn’t like that the amenity kit was presented in a plastic wrapper, which makes it look brand new but cheap. 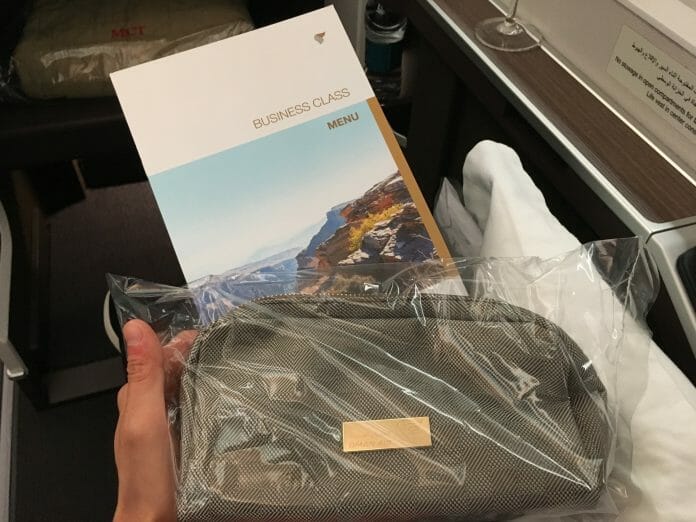 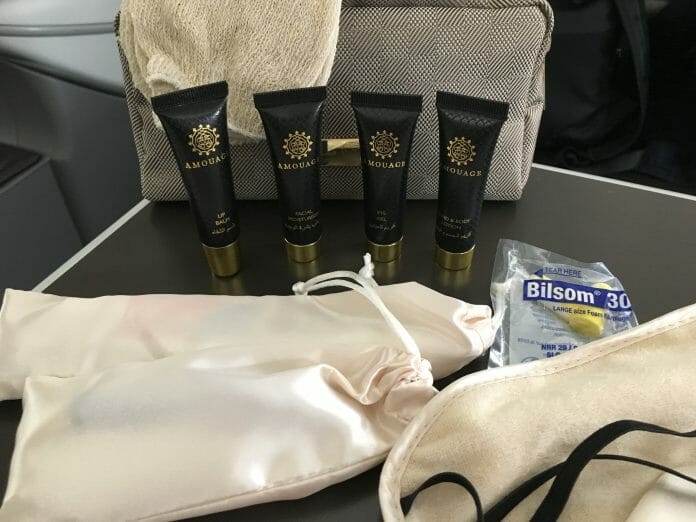 The amenity kit contained Amouage toiletries- we learned later while exploring the airport that Amouage is an Omani luxury cosmetics brand. I didn’t find the pouch itself particularly attractive. It’s a bit gaudy, and both male and female passengers received the same kit, which I thought was poor effort. However I did love the actual packaging of the amenities within, which looked very classy in black and gold. I put on the socks immediately (thin but still comfy). I also appreciated the addition of eye gel! 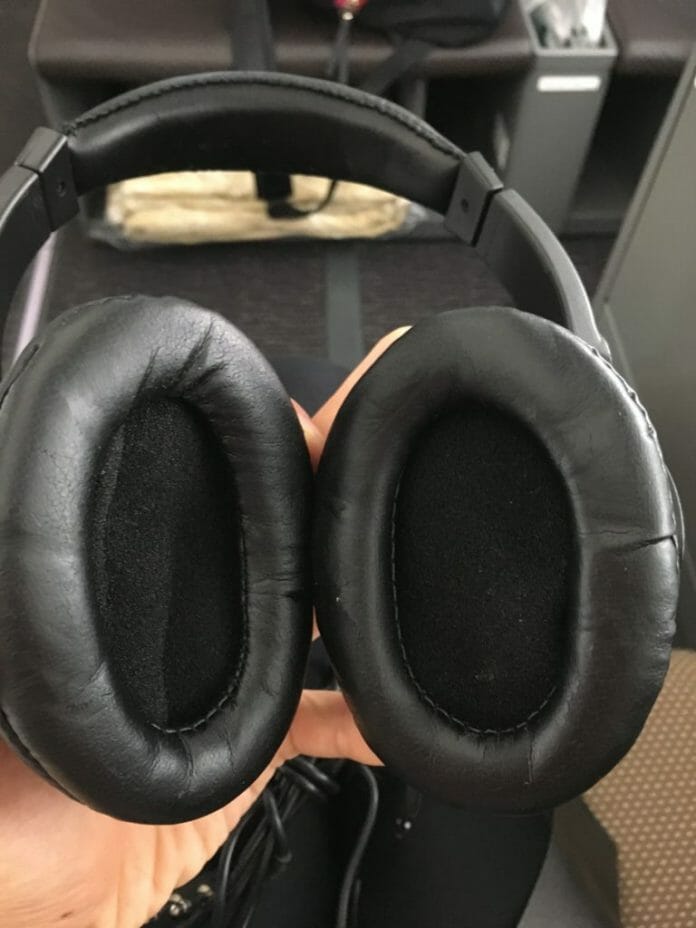 The menus were already in the cubby hole under the armrest with a bottle of water. 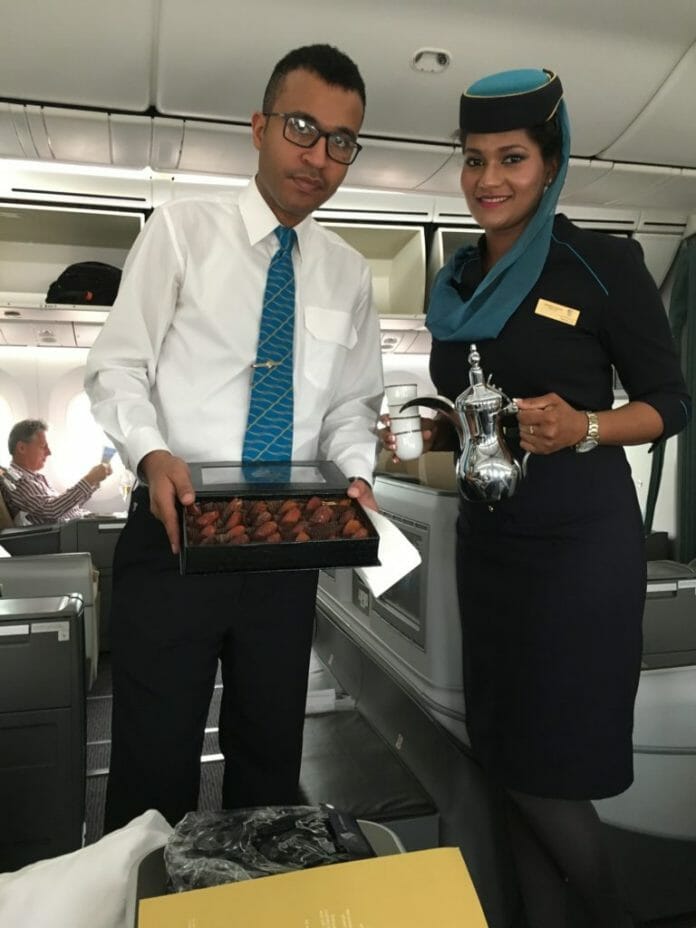 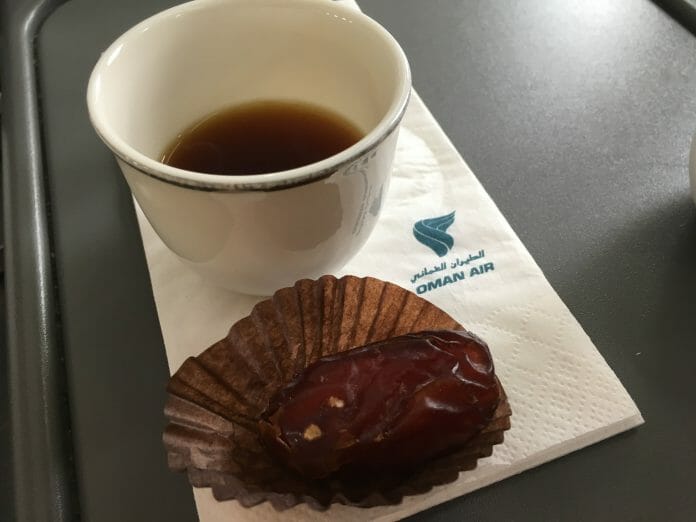 The date was extremely sweet. I enjoyed my first taste of Arabic coffee- it tasted almost like herbal tea.

After take-off, dinner was served in several courses: I skipped the salami bruschetta because it didn’t look appetising at all, but I tried the melon one and thought it was tasted pretty nice and fresh.

I had ordered the chicken soup to start and it arrived with adorable butter rolls. 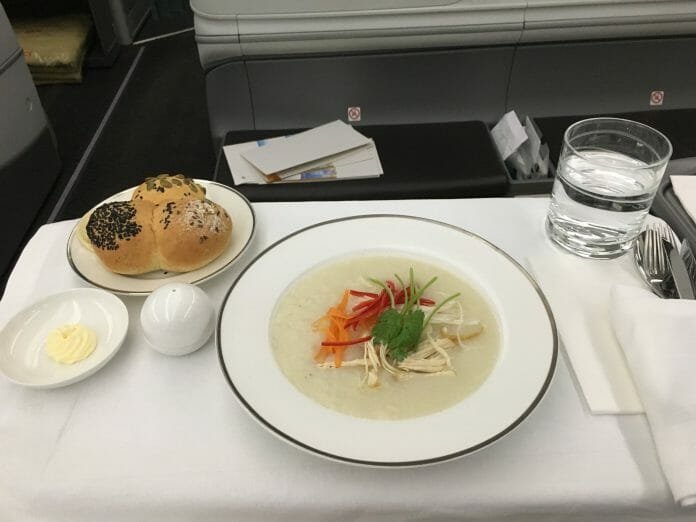 I was expecting a clear broth but instead I got what tasted like blended oatmeal with chicken flavouring. So I fobbed it off to my partner (who enjoyed it) and asked the crew if I could have the traditional Arab mezzeh platter instead, which they brought to me right away. 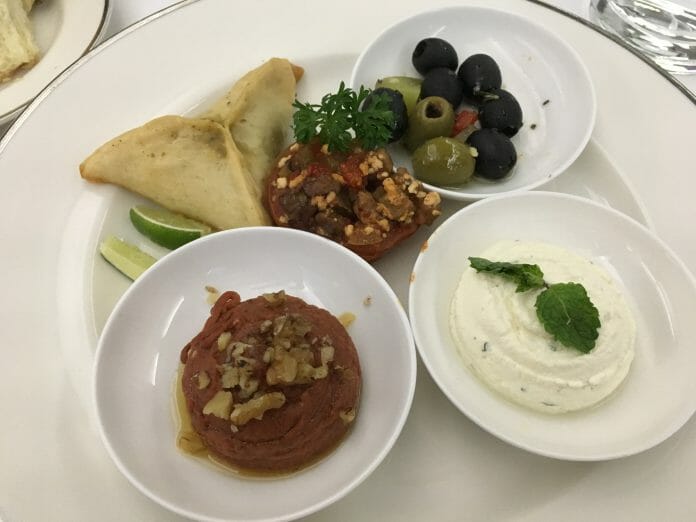 I am partial to middle eastern food and went to town on this. The stuffed red pepper and roasted tomato dip were delicious. The samosa crust was quite greasy but I liked its spinach filling. The crew served the main course shortly after clearing my plate from the appetiser course. The chicken breast had a surprisingly good texture but it was under-seasoned. The pumpkin was also bland. The potato wedges hidden behind were quite spicy and delicious, though slightly soggy. I had ordered the fruit platter for dessert which came with a completely unnecessary sugar syrup drizzle that I didn’t appreciate. 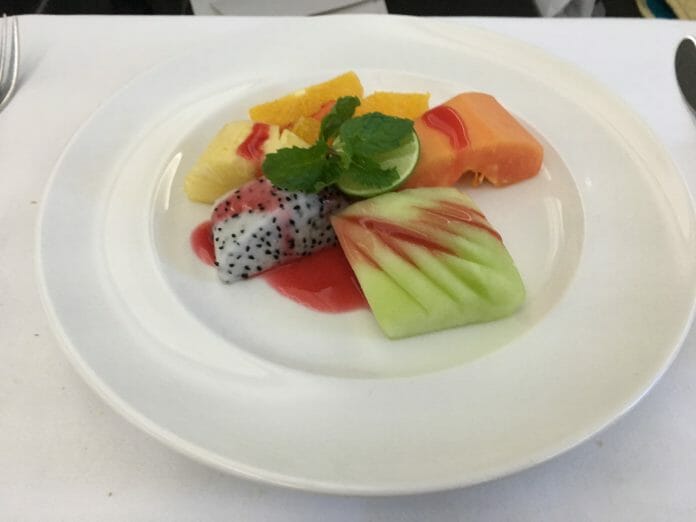 While I didn’t have any, my partner claimed that neither dessert was good. The tiramisu tasted more of cream than anything else and the ice cream was already in a sorry state (as pictured) when it arrived at his seat.

As our tables were cleared, the FA asked if we wanted any coffee or tea. I ordered a mint tea with honey and it was served on a mini tray with a little jar of Egyptian honey on the side, as well as a separate mini saucer for the tea bag. I had never been more excited about bedtime. There was no mattress pad but I felt that the seat was comfortable enough without one. I loved the pillow- it was thick and fluffy. However, the seat fabric trapped a bit too much heat- I woke up feeling quite hot. About 1.5h before arrival, the lights were switched on and we were served a quick snack. I didn’t eat the cheesecake but my partner loved it. The extremely stale roll was slathered with diced cucumber and some unidentifiable squash dressed with mayo. This time, the samosa contained ground lamb in a tomato sauce and was pretty delicious, but the snack as a whole was a let-down.

Upon arrival, we headed straight to the Oman Air business class lounge.

We had 6 hours to burn. The Oman Air complimentary 15-min massage offered to passengers was something I had been looking forward to. When we reached the counter, we asked the staff how we could book our slots and were informed that they could take our reservations on the spot. We were offered 12am and 12.15am as there was only 1 masseuse on duty.

The hot food spread was great- the middle eastern food on offer was very delicious. For the massage, I chose the hot stone back therapy. I was instructed to lay on my front, fully clothed, and the masseuse draped a towel over me. She warmed two stones in some kind of heater on the countertop and kneaded my back with them. After a long flight, it was a truly amazing 15 minutes of pure bliss.

We had decided not to leave the airport because the temporary visitor’s visa cost nearly 100 USD and for 6 hours, it just wasn’t worth it. So we read, tried to nap on the sofas and ate a bit too much to while away the time.

At 1am, it was finally time to board our flight towards Frankfurt. The holding pen was packed and there was no priority boarding. Instead, all passengers were simply herded onto buses in waves to board the plane. 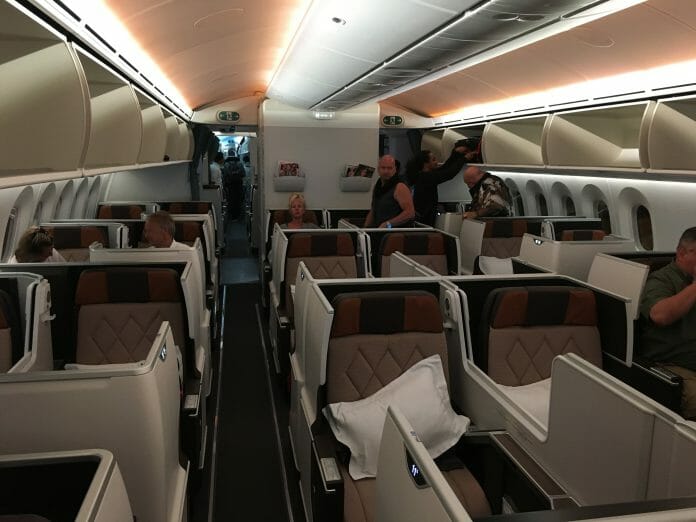 My jaw dropped when I entered the cabin- the new seats were gorgeous and looked sophisticated. One thing we immediately noticed was that the window seats offered much more leg room than the aisle seats.

It was quite a full cabin but shortly after stowing away our carry-ons, the very efficient FA offered us some pre-departure Nicolas Feuillatte. No one introduced themselves to personally welcome us onboard, which was understandable given the almost-full cabin. The crew then distributed the same amenity kits we received on the previous leg. The crew also went around offering Arabic coffee and dates, which I declined. 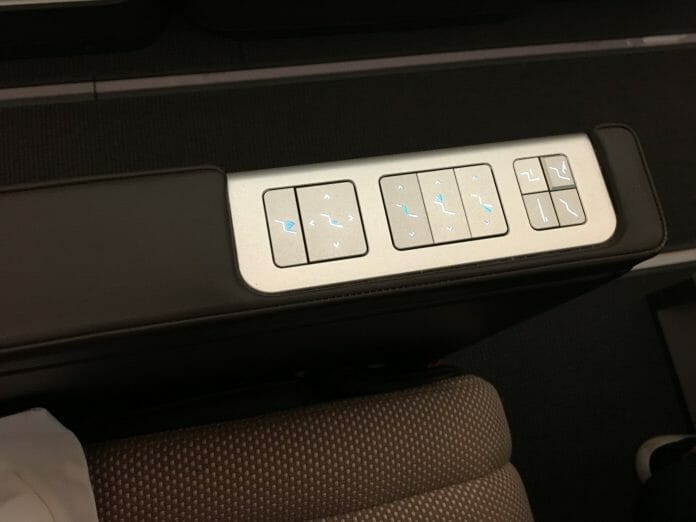 I loved the control with the different seat modes (for take-off, dining, flat bed, angled flat bed). They were idiot-proof and convenient.

Once again, the menus were left under the armrest- the wine menu was exactly the same as that on the previous leg. I explored the much newer IFE, which came with a touchscreen control. One can navigate their offerings via the control like a smartphone, which I thought was quite interesting and modern. However, as with most non-smartphone touchscreen contraptions, it was a bit laggy.

It was past 2am local time after take-off. I had eaten my fill at the lounge so I wasn’t interested in more food. I was almost dozing off at this point so I quickly informed the FA not to wake me up for dinner and also made my breakfast order. I really enjoyed the new seat- the seat fabric was more breathable and stayed cool throughout the flight. I was woken up slightly under 2 hours to landing for breakfast. The omelette was delicious. Unsurprisingly, the hashbrown was really soggy. The yogurt was served a little while after I had started on the omelette. It was nice and refreshing. The FA didn’t pro-actively offer any beverages as he cleared my table so I ordered a latte. 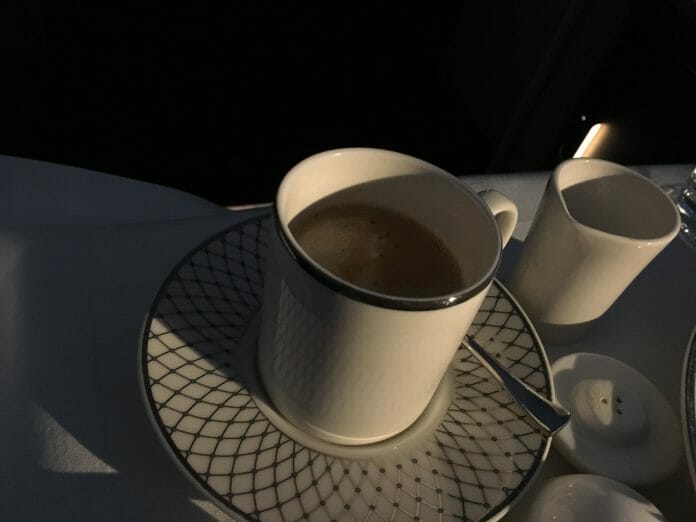 Before the captain announced our approaching arrival, we were offered hot towels on dishes. Seat: This being my first business class longhaul trip, I hadn’t set any expectations at all. I guess I got really lucky with the Apex suite as it seems to be one of the best business class seats at the moment.

Food: The food was good, but not amazing. The snack meal especially was disappointing- they were basically cold bits of bobs of bread and meat.

Lounge: I enjoyed the MCT business lounge because of the amazing food and the 15 min complimentary massage. But perhaps they could work on expanding the nap room since Oman Air layovers are often during ungodly hours for >5 hours.

To sum up: If you’re thinking of flying Oman Air, I would strongly recommend booking a flight with a much longer layover to justify the cost of the visa. 6 hours in the lounge can be pretty painful if you’re travelling alone and especially if you have to spend half the night there and there are no vacant day beds. And don’t forget to book your complimentary massage as soon as you check in to the lounge.

The Milelion Community
The Milelion Community is made up of like-minded people who want to share tips to help each other travel better for less. If you've got a tip, trip report or any other hack that you think the community would be keen to know about, reach out via our contact us option!
Previous article
The Tokyo Ramen Run: My Tokyo Food Pilgrimage
Next article
Here’s how Alaska’s Mileage Plan can get you really cheap JAL business class tickets