[Update: it’s been confirmed that FavePay earns 10X with the DBS Woman’s World card, but not the UOB PPV]

You might not be aware of FavePay, but it launched back in July to support Singapore’s drive towards a cashless society. FavePay is a mobile payment platform run by Fave, the website formerly known as Groupon. I’m not a fan of the pink, but I digress.

FavePay seems straightforward enough to use. Each FavePay merchant has a QR code. You scan it, enter the amount to pay and hit the pay button. The transaction is billed to your credit card registered with FavePay. You also earn cashback of at least 10% at each merchant (I’ve seen 20% and 30% available as well), but the catch is that this cashback can only be used at the same merchant in the future. 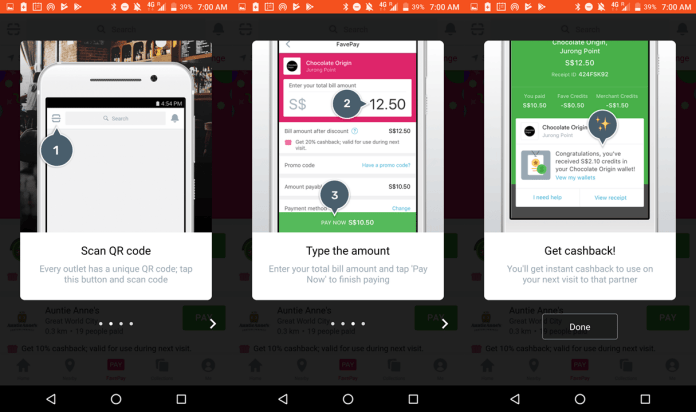 That’s kind of clever if you think about it, like a loyalty stamp card along the lines of a Perx, only slightly more equitable because it awards you a fixed percentage of your spend in rebates, instead of requiring you to hit a particular discrete amount before you get a stamp.

The merchant list is pretty impressive for a service that only launched a few months back. The initial press release talked about 150 merchants, but I’m sure it’s grown since then. I spotted some popular chains like Auntie Anne’s, Pontian and Each A Cup, as well as many other restaurants. You can see the full list when you download the Fave app. 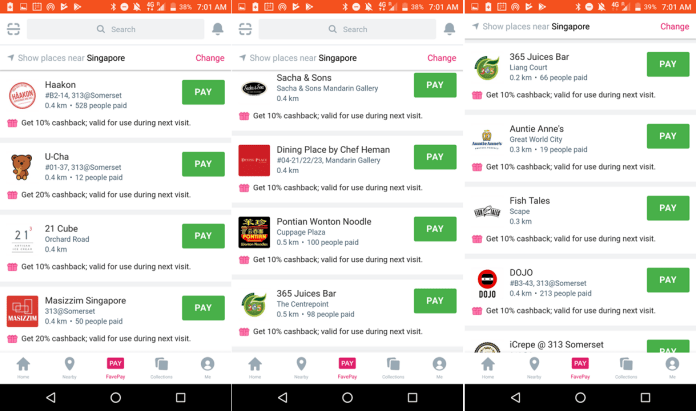 You can use the promo code FIRSTFP to get $5 off your first FavePay payment (that’s a generic code, I don’t earn anything from it), so there’s free money to be had if nothing else

I’m sure you know what I’m getting at here. If FavePay payments earn 10X (otherwise known as 4 miles per dollar, for those new here), it’s then another way of turning offline, non-bonus category spending into online, 10X-able spending. Moreover, quite a few FavePay merchants don’t normally take credit cards, so even if 10X isn’t guaranteed, it’s a way of earning at least some miles from a transaction that would otherwise have been cash only.

The website for the UOB Preferred Platinum Visa lists Fave as a merchant which earns 10X, but what I don’t know yet is whether FavePay transactions code the same way as regular Fave purchases of groupons. My initial hypothesis is that FavePay would also earn 10X on the DBS Woman’s World Card and Citibank Rewards, but in-field testing is required (feel free to report your experiences).

I think FavePay would be of particular value to those who don’t have a dedicated dining card. Even if you do have one, FavePay could be a way of saving your 10X cap under the new UOB Preferred Platinum AMEX scheme.

If anyone’s tried FavePay yet, please chime in regarding 10X opportunities.

Aaron Wong
Aaron founded The Milelion to help people travel better for less and impress chiobu. He was 50% successful.
Previous articleUse your big ticket spending to hit these credit card sign up bonuses
Next articleWeighing the benefits of a LiveUp membership

FYI, I tried to pay for Fave using my Citi rewards card and there is no 10X points

thanks for the data point. that’s disappointing to hear. i’m planning to test DBS WWMC when i’m back in SG. they tend to be the most generous with the interpretation of online spend.

Have you come across a similiar app called EZI wallet? I used it on DBSWWMC n so far the first 1X has been received (awaiting 16th Nov to confirm if this transaction gets 4mpd).

nope, but it looks interesting too. i think with the move towards cashless, we’ll see more opportunities for 10x…or banks removing any incentive for online transactions.

my worry it’ll be the latter…
but hey, it come and it goes, i guess..

Any updates from DBSWWMC? 4 airmiles?

So did you get 4mpd on EZI Wallet?

Any luck with hsbc revolution?

Any luck with UOB PPV ???
Currently I set UOB Prvimiles as the default card.

Hi, so does the DBS Woman’s World card give 4 mpd for both Fave and FavePay? Thanks!

thanks! just out of curiosity, do you know if DBS Woman’s World card earns 4 mpd on Dash? So far i know that Citi Prestige seems to be the best for Dash but it only gives 1.3 mpd.

I suggest looking at the comments section of this article on Dash instead for past discussion on this topic – but with regard to your question, it seems like WWMC doesn’t get any points (and Citi Prestige is probably the highest earner).

Whew! Yes I’ve been using the Citi Prestige on Dash. Alright thanks for the clarification!

how about UOB preferred platinum or UOB visa signature?