Stand a chance to win a pair of Suites tickets when you spend on your DBS/POSB cards between 13 April and 31 December 2018.

DBS has launched a new spend and win contest called “Win the Suite Life” with a total of 50 Singapore Airlines Suites tickets up for grabs:

What are the mechanics of the promotion?

You need to book a trip (defined as a transaction on airlines, hotels (including AirBnB) or travel agencies) using your DBS/POSB credit cards and register it through this link. Your trip must not have started yet at the point of registration.

There is no requirement that the trip booking was made during or before the qualifying period. In other words, if you booked a trip in January 2018 with your DBS/POSB card and travel in May 2018, you can register this trip.

You earn chances to win based on the following allocation:

Any spending incurred before 13 April 2018 will not count, however. So in our above example, whatever you paid in January 2018 for your trip in May 2018 will not count towards your total. It will, however, unlock your eligibility to participate in this promotion with your subsequent spending.

Spending is cumulative and your chances will be calculated at the end of the promotional period (i.e after 31 December 2018). Note that there are exclusions as to what counts as qualifying spend, with the usual suspects not qualifying. 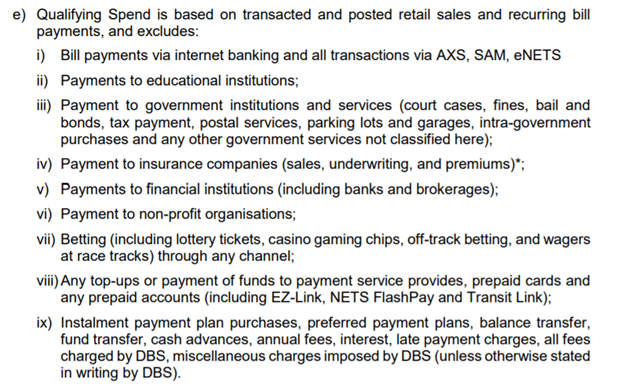 You don’t actually have a choice of where you go if you win (the tickets are assigned randomly), although you can pay the fare difference if you want to swap your destination (one wonders how much it’ll cost to swap Shanghai with, say, New York…)

What’s nice about this promotion is the relative lack of strings attached to the prize. Your pair of Suites tickets book into ‘A’ class, which is a revenue fare bucket and hence much easier to find space for. You’ll also earn 200% mileage accrual, and there’s no taxes or surcharges that you need to pay. UOB could learn a thing or two about giving away free air tickets…

If Suites isn’t available for your preferred flight timing (eg for Sydney, where some flights are operated by 77Ws and others by A380s), you can fly in First Class instead. Be warned- no shows will result in your entire prize being forfeited.

This is a pretty epic promotion, all things considered. You’re quite likely to be using the DBS Woman’s World card anyway for your online flight and hotel transactions (at least those which are paid in full online), with the DBS Altitude as your backup option once the Woman’s World is maxed out.

Be sure to register your trip once you have one to get your chance counter accumulating.

Aaron Wong
Aaron founded The Milelion to help people travel better for less and impress chiobu. He was 50% successful.
Previous articleSingapore Airlines’ complacency over fraud and account security comes back to bite them
Next articleRegister now: Double points on Hilton stays from 1 May – 31 Aug 2018

I have never won anything in my life haha

Kinda confused on the part of 1 chance for normal non travel retail spend. Does it mean all other spending automatically qualify without the need to register a trip?

you must register to even qualify in the first place.

And regarding Aaron’s reply below to Confused, it really seems quite silly to qualify for a contest that carries zero chance! Sounds like the whole bit about trips-that-were-booked-using-DBS/POSB-cards-prior-to-this-promotion-but-not-yet-embarked-on-qualifies is totally irrelevant?

I believe you must have a trip booked and paid with dbs cc to register. After the registration, any spending will qualify either for 5, 1 or 0 chance depending on the nature of the spending. You need not register every single local payments.

Trips that were booked using DBS/POSB cards prior to this promotion but not yet embarked on qualifies for the draw, as long as you register the trip before embarking on it. But DBS didn’t say how many chances this trip will earn? Would I be correct to assume it’ll be 1 draw chance?

this trip “qualifies” you to participate in the competition, but the $$$ you spend don’t count towards your chances.

obviously step 1 and 2 can be combined if you buy your trip right now and register. but if your trip was bought in jan, you just qualify, it doesn’t earn you chances.

The T&Cs, under the “Chance Allocation” table, says “…accumulated across all
DBS/POSB Credit/Debit Cards posted during the Qualifying Period”. Aaron also rephrased it: “Spending is cumulative and your chances will be calculated at the end of the promotional period (i.e after 31 December 2018).”

Sorry if this is an inane question. Does the DBS WWMC earn 4mpd for air ticket purchases too within the first $2000 / calendar month? I thought 4mpd- earning online purchases only refer to bags and shoes and stuff (that I don’t buy online as a guy)

WWMC earns 4mpd for all online transactions, regardless whether you buy girly things or not.

Does hotel booking through agoda and such website satisfy the registration requirement?

do I have to registered each time when I use different DBS/POSB CC after bought ticket/hotel booking? thx

This is one of the most ill-conceived promotions I have ever encountered. Its complicated and confusing and lacks transparency. Good effective consumer promotions should always be simply and easy to participate. Not this one. I have been in correspondence with DBS and everyone whom I spoke to seem to be practising “tai chi” because the front line managers do not seem to know how the promotion works and so they transfer my call from one department to another. I have spent almost $20k since the promotion started and had only one miserable sms to advise I have received 10 chances… Read more »

anyone know if DBS cancelled this promo? They’ve been suspiciously quiet and deleted all info on it from the internet…

Draw will only be conducted on 1 Feb 2019
https://www.dbs.com.sg/iwov-resources/pdf/cards/promotions/win-a-suite-life-promo-tnc.pdf

And so I received sms from dbs that I earned 72 chances of winning a pair of tickets 😂 We’ll see on Feb. 8th!

when the result is coming

when is the result out and where do we check it?

Me
Reply to  traveller