Before we get into this, some of you may have some questions. Most likely something along the lines of:

I’ll keep it brief. I am your run-of-the-mill aviation nerd. I care more than your average person about anything aviation related. I love flying.  I moved to Singapore not that long ago and am fortunate to get to indulge my ‘habit’ with reasonable frequency (I average around 90-120 flights per year). A lot of these flights are to places that don’t come up on the travel hacking blogs, and are sometimes on less mainstream carriers. I learned a lot from ML and blogs like it and I wanted to try and give something back by writing about the more interesting trips. So, leave a comment with your thoughts/feedback (good or bad) and at the end of this if enough people don’t feel like they would rather eat their own fist than read another of my reports, I will write more. Deal? Deal.

And so it begins…

I had a problem – I needed to get to Uganda, then Ghana from Singapore, and back on quite short notice. Simple enough you say, there are many one-stop options and with a bit of open jaw ticketing, the metaphorical Bob should be your metaphorical uncle. But you’re not here for simple and, after monthly trips between Singapore and Africa, I was bored of simple. I had at my disposal a few Singapore Airlines(SQ) miles, about 150k Flying Blue miles and a desire to try some new routes. Here’s how I ended up combining SQ, South African Airways (SA) and Air France (AF) Business Class with the holy grail of redemptions, Air France La Premiere to add a bit of spice to my commute.

Let’s start at the beginning. I really like SQ’s A350, and it’s a wonderful way to get to South Africa. SQ also added a seasonal second SIN-JNB flight on some days for July and August (SQ 482). The additional flight leaves SIN at 1400 and arrives in at JNB at 1830 which is a nice novelty as the normal one leaves at 01:00 am and land at around 6 am. The normal route is better for connections and gets you the full day in SA, but it also makes the flight a much more transactional affair – my MO is usually to eat something in the lounge, do 16 laps of the lounge looking for a seat, give up, brush my teeth and go and perv over duty-free whisky until boarding time.

Onboard, I skip dinner and deploy bed mode as soon as the seat belt light goes off, and aim to wake up somewhere around Madagascar. I’m yet to have an impressionable breakfast in any class on any carrier (though I remember as a kid being impressed that Air Tanzania had cornflakes in economy on its Dar-es-Salaam – Lubumbashi (DR Congo) flight),  so it’s normally just some coffee and fruit, half a movie that gets good just as we land and all too soon the flight is over.

It’s absolutely what Business Class is meant to be about, and presumably, if you’re asleep for most of it and arrive ready to hit the ground running (instead of developing a vacant stare and drooling on people) then it’s served its purpose. But there is no fun in that. So, when I saw the added frequency and new timings I thought it would be good to see what I’d been missing all those hours asleep on that route.

Even better, SQ482 was added to the ‘Spontaneous Escapes’ putting one-way Business Saver award at a mere 30,000 KrisFlyer Miles (normally 45,000). Well, that would have been ‘even better’ if my plans had firmed up in time, but instead, I found I needed to book the ticket precisely one day after the price went back up to 45,000 miles. Typical.

There was one small problem, I’d been burning miles more than earning of late and I only had ~34k KF miles and needed to be in Uganda in about a week. I’d also put Star Alliance on the back burner and had done my last 2 trips on SkyTeam to keep status for next year, so I didn’t have a lot in the pipeline. I hastily initiated a transfer from the one credit card I own (I’m not properly set up in Singapore yet), but didn’t know when those would hit. I had ~13k miles pending on KrisFlyer Spree mostly from Hotels.com purchases but those were unlikely to hit my account in time.

Painfully, there was Advantage award space on my dates and I was 11k miles short with no idea whether I could get them in time. Award space is a fickle mistress, and my dates weren’t very flexible, so dear readers, I did the one thing that will probably force Aaron to raise an angry mob with pitchforks and chase me out of town. I bought the remaining miles from SQ at a vastly inflated price and got the ticket.

I rationalised it like this: paid Business was something like S$5,300 which, well, no. I didn’t really want a return ticket because I had other travel within Africa, and I value novelty, so I wanted a fun way back to Singapore. Premium Economy was 30,000 miles which I don’t consider aspirational. Economy was more than S$600, and I had set dates to travel on.

So, in my mind, I bought a cheaper than Economy ticket for $600 and paid 30k miles to upgrade it to business. In doing that I could a) Get 10 awake hours on the A350 and see whether SQ J was worth staying awake for and b) find a fun way back to Singapore.

After a few hours of hugging myself and sobbing in the shower after paying SQ for miles, I set about on the next task – finding a fun way back to Singapore from Ghana. Let’s be clear, Emirates was no dice for me (deeply underwhelming Business, and no one I work with values me enough to pay for First and I lack the miles for an upgrade on any long route).

Qatar was off the list (in the most first world of problems, I’ve reached saturation point with QR Business – too many flights in 2016/17). That bear in Hamad airport is creepy, their F1 Simulator is always broken and their staff says silly things like “please sir, this is a space for children” and “please stop crying sir, that child that defeated you in FIFA showed freakishly advanced hand-eye coordination for someone of her age”. So Qatar was off.

Ethiopian is a go-to, but it’s not exciting and I have more travel booked on them soon. Kenya Airways 787 via BKK is also very pleasant, but I did that 3 weeks ago.

Then I hit pay dirt – Air France recently relaunched their CDG to ACC (Accra, Ghana) route, and had some sensible one-way Business Class fares on ACC-CDG-SIN. Remember that stash of FlyingBlue miles? It turned out (after some fairly long calls with the FlyingBlue team) that they could be deployed to get me an upgrade to La Premiere on CDG-SIN. This meant that despite having a paid Business fare, I still had to redeem 120,000 FB miles to get the golden ticket (which was enough for an outright Business award from SIN-TPE-LGW on CA under the old system).

Being the sensible, rational adult that I am, I did it. There is no other reason why one would fly via Paris from Accra to Singapore, especially not with a 12-hour layover in CDG making it 2 back to back overnight flights. But with the La Premiere upgrade, I’d sleep from ACC, land in CDG in the morning, and have the whole day to enjoy the lounge (i.e. 3 Alain Ducasse meals), nap, (and work if necessary) and then settle down to ~13 hours of La Premiere, arriving back in Singapore on a Friday afternoon, likely to collapse from liver failure after an overdose on glorious French food.

That just left JNB-EBB and EBB-ACC. Uganda to Ghana was fairly set in stone as I would travel with a colleague on that leg on KQ in Economy (Embraer E190 and Boeing 737-800). I booked SA Economy for the JNB-EBB leg as I’ve had some good luck on that route with their bid to upgrade (“Step Up”) programme. The final itinerary looked like this: 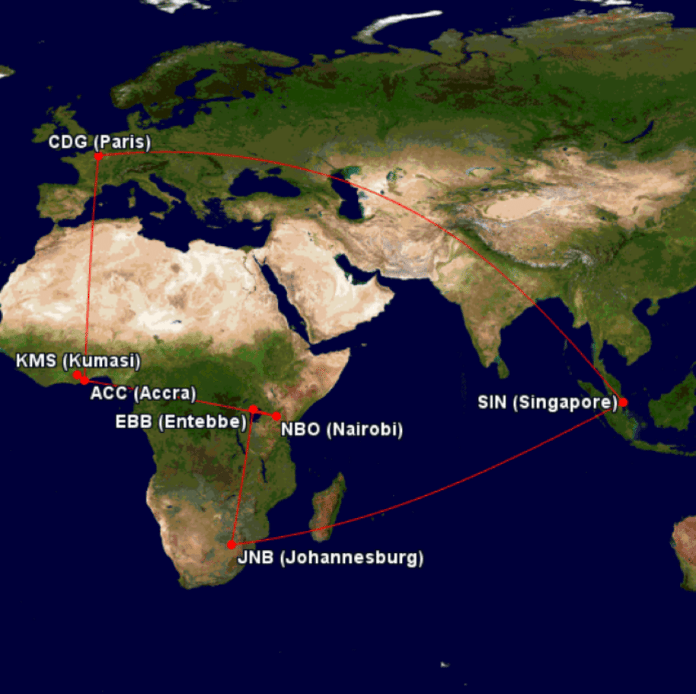 All clear? Then let’s check out the first (of many) flights- Singapore Airlines’ A350 Business Class experience.

The Milelion Community
The Milelion Community is made up of like-minded people who want to share tips to help each other travel better for less. If you've got a tip, trip report or any other hack that you think the community would be keen to know about, reach out via our contact us option!
Previous article
Singapore to South, East and West Africa: Singapore Airlines A350 Business Class SIN-JNB Review
Next article
UOB PRVI Miles cards offering 4.8 mpd on overseas spending, but…

What an awful predicament, that no one you work with values you enough to pay for First.

I’d be thrilled to swap places with you anytime, as no one _I_ work with values me enough to pay for Business, or even Premium Economy!

Good stuff Sam, I hope you get the gig like James did for OMAAT.

Too long too self indulgent. Bring back the regulars.