There are two types of American Express lounges:

Aaron has reviewed the one in Houston on his way back to Singapore and found it to be relatively decent. Centurion lounges are wildly popular in airports in the USA as they offer a much superior food and beverage offering as compared to the likes of normal airline lounges. They got so popular that it had led AmEx to impose access restrictions on them in recent times to curb overcrowding.

At present, there are 9 Centurion lounges around the world as well as 7 American Express lounges: 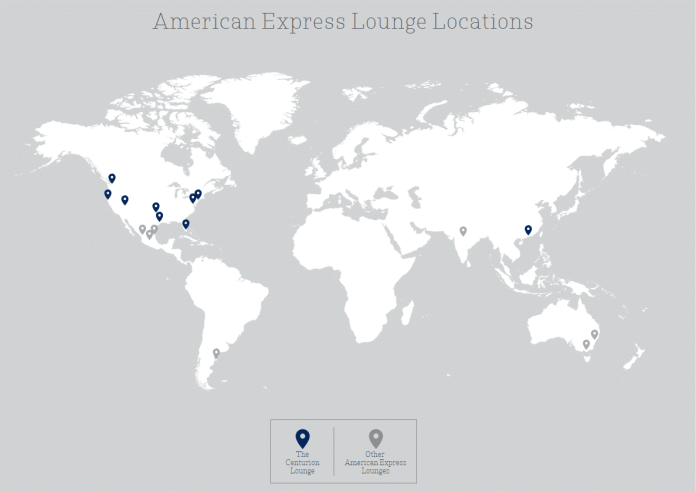 American Express has announced London Heathrow and Charlotte as new locations for its Centurion lounge and these lounges are set to open in 2019 and 2020 respectively.

Centurion Lounges to open in LHR T3 and CLT

American Express has announced that a new Centurion Lounge will be opening at London Heathrow’s Terminal 3 as well as in Charlotte. Charlotte is a big American Airlines (AA) hub and AmEx may be looking to target some of its high value corporate flyers by showing them a glimpse of the good life.

Having a Centurion lounge opening in there would quite likely be a strategic move aimed at its premium card members from the US who are flying back to the States on American Airlines.

Both of these new Centurion lounges will feature showers as well as high-quality food and beverage offerings which are curated by top chefs.

The opening of The Centurion Lounge in Heathrow would be AmEx’s first lounge in Europe. London is a major international hub and thus the decision to open a lounge there is a very good move from AmEx as it would be able to serve its international Platinum and Centurion cardholders as well. Fingers crossed that we’ll see a Centurion lounge opening in Changi as well in the future.

Matthew Chong
Addicted to luxury travel while trying not to go broke, Matthew is always on the prowl for the best deals in the travel industry. When he's not busy studying, he can be found trawling the internet and reading up on credit cards, airlines and hotels. He also wouldn't mind taking you out on a date.
Previous article
Final Power Award Searching workshop for the year: Tickets now available
Next article
My 3 (possibly controversial) thoughts on the JD Power Credit Card Satisfaction survey

I believe it’s already opened in LHR T3 as it was displaying the Amex centurion sign at the counter during my trip to London a few weeks ago. The ambience is nice but the food sucks big time. Not being a racist but all Indian food with an all Indian staff from cook to bartender. It’s ok if the Indian cruisine has standards but it’s worse than any coffee shop I go to in Singapore. Very disappointed.

Not being racist, you might have to broaden your culinary tastes beyond coffee shops in your neighbourhood. And while you are at it, try to get your head around the fact that similar food can taste differently at different places.

Hi I am just sharing my personal opinion on the food since I have recently visited the lounge. In addition, other readers might go there with higher expectations given that it’s an Amex centurion lounge.

Of course you are most welcome to share your personal experience at the same lounge. If you have not been there, then you should go experience it first hand before posting.