BOC introduced new T&Cs for the BOC Elite Miles World Mastercard on 15 March. Here's more info on what is and is not happening.

I had a chance to chat about these changes with my contacts at BOC, and here’s some takeaways I got.

Effective 15 March, BOC has adopted UOB’s definition of overseas transactions. For a transaction to count as overseas (and hence earn 3.0 mpd instead of 1.5), the payment processing must be done overseas.

My main objection to this (which I shared with the team) is that it unfairly puts the onus on the customer to figure out where a given merchant processes payments- not exactly the kind of thing that one can easily learn.

If it’s any consolation, BOC told me that it’s possible to verify payment processing location, albeit after the fact. Look at your transactions in your credit card statement- you’ll see three letters at the end. This refers to where the payment was processed. 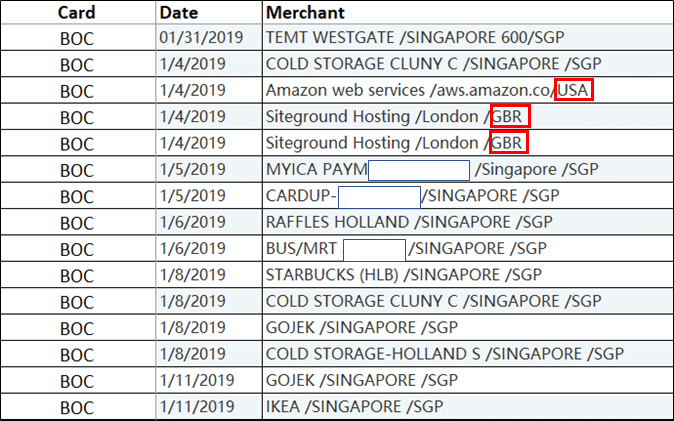 Using my statement as an example, you can see that with the exception of Amazon web services (USA) and Siteground (GBR), all of my other transactions were processed in Singapore (SGP).

I always thought the three letters after every transaction referred to the transaction currency, but Siteground actually billed me in USD and processed the payment in GBR, so that’s something to take note of for future reference.

I’m not thrilled about this change, but at least there’s a way of reconciling your points.

Capping the maximum points per transfer

From 15 March, BOC is capping the maximum number of points that can be transferred in a single transaction. 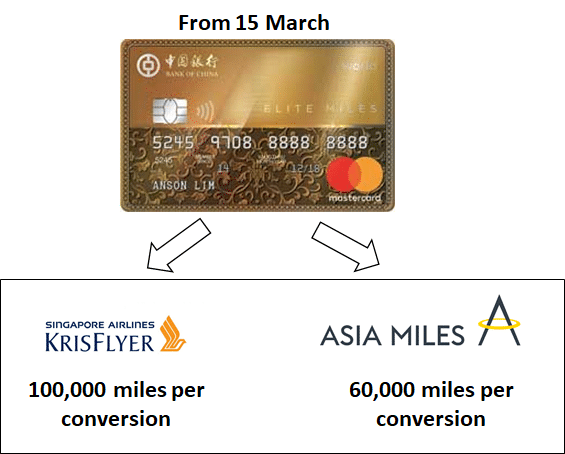 Each transaction costs a total of $30, and given that a round-trip Business Class ticket can cost as much as 198K KrisFlyer miles (or 170K Asia Miles), a couple traveling together may have to pay up to $120 in conversion fees (or $180 if you opt for Asia Miles).

BOC tells me that the purpose of this cap is to deter gamers by raising their cost of cashing out. But that really doesn’t make sense to me. If the objective is to deter gamers, the way to do so is via exclusion categories (see below) rather than conversion caps. The former is more specific, the latter acts as a blanket penalty for everyone, including those who earned their points legitimately.

BOC says they will review this cap when their new rewards program goes online, so we’ll have to wait and see what happens.

Of all the changes to the T&Cs, this is probably the one that made people the most worried.

The updated T&Cs redefined the types of transactions that were ineligible for earning rewards points. Although the initial text looks largely similar…

The new T&Cs exclude government institutions, utility payments and charitable donations from earning points. They also further clarified the sorts of prepaid account top-ups that would not earn points.

BOC is enforcing these T&Cs prospectively, not retroactively (as well they should). This means that if you used your BOC Elite Miles World Mastercard to make government, utilities or charitable donation transactions prior to 15 March 2019, your points will not be clawed back.

However, any points earned from YouTrip, GrabPay or Dash etc. top ups before 15 March 2019 will be clawed back. BOC pointed out that the original set of T&Cs already excluded the “loading of a prepaid account”, so that’s fair enough in my opinion.

Regarding Grab, BOC has confirmed that although GrabPay top ups will not earn points, ad-hoc Grab payments such as GrabFood, Grab rides and Grab parcel delivery will continue to do so.

Another hot button topic is that of Cardup and ipaymy transactions. I’ve confirmed that these transactions are eligible to earn points, and there is no clawback of previous transactions.

I understand from the Telegram group that some customers have been told otherwise by CSOs. I’ve let BOC know, and they’ll be retraining the CSOs once more about the changes so hopefully there’ll be no further misunderstandings.

If anyone strongly believes that their points for Cardup/ipaymy/utilities/government services/donations were clawed back, do call up BOC and ask them to open a case for you.

Hopefully this clarifies some outstanding questions around the new BOC T&Cs. If there was anything else you were wondering about, you can leave a comment below and I’ll try to ask them about it as well (no promises).

If you’re looking for a general spending card, then objectively speaking the BOC is still the best performing option at the $30K income level with 1.5/3.0 mpd on local/overseas spending. Fair warning, however- you can’t expect the same level of IT and process efficiency as other banks (the BOC Elite Miles World Mastercard doesn’t even have a website yet, for crying out loud). The good news is that I understand points transfers are taking place a lot faster now, and hopefully we’ll see some significant IT upgrades this year.

1.can you ask them why did they increase the BOC points required to redeem vouchers. from 3200 BOC points for a 10 dollar voucher to 5000 BOC points.
2. when is their rewards program going online?

All this does is reinforce the perception (or fact) that they are unreliable. Won’t be using this card anymore.

Could I clarify if u mean the cardup and ipaymy pts won’t be clawed back but still excluded going forward? Or they would still earn pts going forward? I assume they fall under the category of payment service providers which is excluded under the new tnc. If not excluded, I could change my upcoming cardup payment from Citi PM to this card instead.

Not clawed back and still earnpoints going forwards.

Does it mean we can still get miles when paying taxes via ipaymy?

How can they reward points for dash etc baiting customers to do more and hence improve their p&l then clawback afterwards? It’s unfair.
What they should do is not award customers who Pay dash in the first place than award them, hence encourage customers it is ok to use, then clawback.
Unfair business practice. BOC management needs to look into this unfair practice!!!

Yes, it’s really unfair especially other credit card issuers are awarding points for Grab and Dash. BOC really needs to look into their business practice. Worst still, they are not responding to customer’s email and letter at all….

If you signed up for the card, you have only yourself to blame. Writing was on the wall loooong before the card finally reached you.

haha are you a mile chaser?

If a bank needs a miles blogger to have to talk to them and allow the bank a chance to explain its rationale (or lack thereof) for its junk product to the wider public, that is all the customer needs to know.

Any idea what about topping up to Mileslife wallet, is it considered as prepaid account top-ups>

Good question – I want to know too.. I tried searching Mileslife site for answers but nothing there too… Mileslife still claims that you can triple drip.

“BOC tells me that the purpose of this cap is to deter gamers by raising their cost of cashing out.”

This is the most daft statement I’ve heard a bank adopt. Just because they don’t have an effective process to deter gamers (presumably, minority of cardholders) they decide to impose the cost to the majority who aren’t gamers.

Call a spade a spade. BOC is looking to make additional revenue. And don’t be disingenuous to call it anything but.

While dealing with BOC regarding the point discrepancies for foreign transactions previously, I sort of guessed that this day will come. I had to escalate my case to a manager to get an explanation: BOC IT system allocates the points based on the location of the payment gateway. Thus for all the foreign currency transaction which are processed in SG, a team has to check and manually assign back the correct points. This has been done for my transactions up to December 2018, but not for Jan 2019 – 14 Mar 2019. My question is: Will BOC take the responsibility… Read more »

since payment via axs and sam are excluded from points, is cardup the only way to earn miles from insurance payment?

Hi Aaron, noticed that nothing was said about insurance – i.e. we can still earn BOC Points for insurance premium payments? As per what they were happily advertising last year when it launched? Or is it excluded to your knowledge?

Nothing has changed for insurance.

Not sure about points transfer getting faster. I sent my completed forms (credit to Asiamiles & KrisFlyer) via email on 27th Feb and received an acknowledgement the same day.

Admin charges and points only deducted in mid March and I’m told to wait another two weeks for the points to be credited.

This is after I called them to highlight they had initially only processed the Asiamiles redemption.

No more BoC — not at this only slightly better earn rates.

i personally have never tried a transfer before- this is just what i’m gathering from the chat group. i’m actually surprised your asiamiles went through before KF, i’d have thought it’d be the other way round.

With the launch of SimplyGo today, and also noting that Translink is now on the exclusion list – does this mean that BOC EM does not earn any more miles on public transport transactions?

Have been told that it continues to earn, but I’d feel more comfortable with confirmation

I see, well, on a side note – the TransitLink Promo page for Simply Go shows that for BOC Cards (including the BOC EM card face in the lineup) – “Enjoy up to 20% rebate and accelerated rewards when you tap and go with your BOC Credit/Debit Mastercard. Visit http://www.bankofchina.com/sg for details”

20% rebates on public transport whilst little is one of the highest of the lot after Citibank. But I would also feel more comfortable with confirmation on this too.

I have points clawed for govt-linked transactions prior to 15mar, boc staff told me that these fall under excursions as well and no points awarded. No case open for me, not sure what can I do.

That should not be happening, since new t and c take effect from 15 Mar. Drop me a message via contact us and I’ll ask around

This statement made me choke on my porridge, so to speak: “BOC says they will review this cap when their new rewards program goes online, so we’ll have to wait and see what happens.“

More than a year later, their rewards program is still NOT online, the arbitrary miles transfer cap still exists, miles conversion rate has been severely devalued, and customers have cancelled their cards in droves. Way to go BOC!