Spontaneous Escapes for November 2019 are out, with 30% off selected Singapore Airlines and SilkAir awards.

KrisFlyer Spontaneous Escapes for November 2019 have been announced, with 30% off selected Singapore Airlines and SilkAir flights.

All Spontaneous Escape awards must be booked and ticketed by 31 October 2019 and are for travel between 1-30 November 2019 (both dates inclusive, blackout dates apply). This gives you 16 days to book, slightly longer than usual.

54 destinations on offer for November 2019 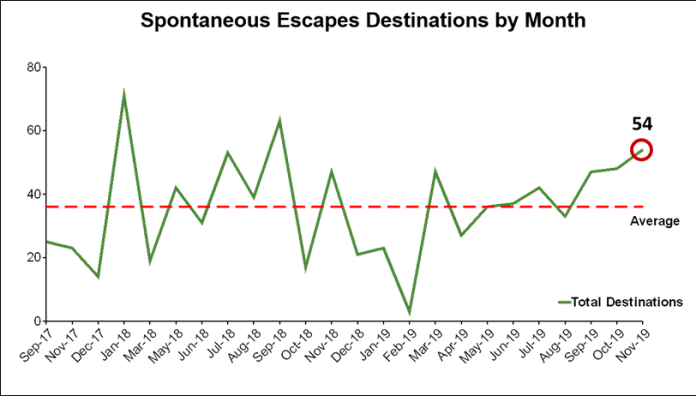 November 2019 features 54 destinations in total (I count Tokyo Haneda and Tokyo Narita as two separate destinations), which is more than average compared to previous months.

Here’s the summary of what’s available for SIA and SilkAir in November 2019:

After a brief absence last month, this month sees Spontaneous Escapes stalwarts Bangkok, Mumbai, Hanoi and Hong Kong return to the fold. There’s still plenty of options to Japan and Australia, with deals to be had in Business Class to cities like Tokyo, Fukuoka, Nagoya, Sydney, Melbourne and Adelaide.

SilkAir is only offering Economy awards once more, but I wouldn’t really consider redeeming my miles for their current Business Class products anyway.

Here’s what caught my eye:

I noted in my meta-analysis of Spontaneous Escapes that we don’t really see Europe feature all that often. So imagine my surprise to see nine European destinations this month, including never seen before cities like Milan.

Unfortunately, the bulk of these destinations are only available in Economy or Premium Economy. Even with a discount, I’d find it hard to recommend burning your hard-earned miles on these cabins. I suppose, however, that if you were just trying to get as many people as possible to Europe for a vacation, then this might be a deal for you.

The only European cities with discounted Business Class awards are Dusseldorf and Frankfurt. On the bright side, these are great places to use as springboards to the rest of Europe via Lufthansa. Moreover, Dusseldorf is available in both directions this time round, versus the usual one-way offer we see in previous months.

It’s rare to see Business Class awards to the USA get discounted, so it’s good to see San Francisco available to and from Singapore for 66,500 miles each. This is a great price, although it’s available on the one-stop SQ1/2 via HKG only (i.e. not the non-stop options). This route is served by a B77W with the 2013 Business Class seat.

This month also sees a Spontaneous Escapes debut for New York JFK as the elusive SQ25/26 finally goes on offer, albeit in Economy Class only.

The sharp-eyed among you may be wondering if it makes sense to get to JFK by combining these two awards:

Singapore Airlines has historically released Spontaneous Escapes to the USA two months in advance of travel, but this month’s deals are meant for travel in November, just like all other destinations.

Singapore Airlines will be taking over SilkAir’s Busan routes from 28 October, and it’s not because of capacity shortages arising from the 737 MAX 8 groundings. Rather, it’s because demand to Busan is strong enough to warrant an upgauge from a B737-800 to an A330-300 (an additional 123 seats)

Unfortunately, the A330 isn’t a plane I’d advise you to redeem miles on, even with Spontaneous Escapes. Save your miles for a better Business Class experience.

Spontaneous Escapes are a great way of stretching your miles, especially if you’re traveling with your family. Remember to ticket your awards before 31 October!

Aaron Wong
Aaron founded The Milelion to help people travel better for less and impress chiobu. He was 50% successful.
Previous article
Review: Qatar Airways A320 Business Class Doha to Kiev
Next article
Get S$100 cash upon approval for the UOB PRVI Miles AMEX (both new and existing customers)

Is that supposed to be a good or bad thing…? O_O

It can be a good or bad thing.

It depends on whether you like the 2013 business class seat on the B77W.

it’s still pretty good! have a read of this guide for more details

I have a Business Saver redemption ticket booked for SIN-PEK in November. Question is whether it’s worth it to cancel that ticket to redeem a spontaneous escape? I can’t seem to find the answer to this in your other articles. It saves me 11,700 miles for a US$75 cancellation charge, so on the face of it I would think yes. And in terms of process, don’t think I can change route etc, so it would be cancel (pay US$75), ask SQ to expedite re-crediting of miles (any charge for calling them to do this?), and book the spontaneous escape. Anything… Read more »

Don’t ever try to redeposit your miles unless necessary. You can make changes to your redemption such as “change of route, cabin class, award type or add a stopover on Singapore Airlines / SilkAir” for US$25. You can change to another route with same or more miles for US$25. Is 11,700 miles worth US$25? This should be the question.

I don’t want to change any of that. Plus there’s no miles savings with your suggestion so don’t see how you arrived at “is 11,700 miles worth US$25″… In any case, even if I did such a change, I think it would be similar to changing from Biz Advantage to Biz Saver – I could ‘change’ the award type but I wouldn’t get the balance miles back.

if you have enough miles to book a new trip, just book a new one(the spontaneous rate) and change the current one to another route you like. That’s why the difference is only US$ 25 vs 11,700 miles.

I see. Unfortunately no other travel plans yet so this wouldn’t work. And I (ideally) don’t want to transfer additional CC miles to book a Spontaneous Escapes flight. So am hoping cancelling and recycling the miles for a new booking is viable (given it’s 2 weeks till end of month).

edit – sorry internet lagged and i posted twice by accident!