Can you change the second destination on a KrisFlyer $100 stopover trick?

Are you locked into your second destination after flying the first leg on a stopover trick? Experience says yes, but there's an article in today's papers that says otherwise...

There’s an interesting article in today’s Straits Times called “7 hacks to max your miles” (paywall). Unlike most frequent flyer coverage in the mainstream media, it’s actually pretty well-written, and clearly by someone who’s into the hobby. 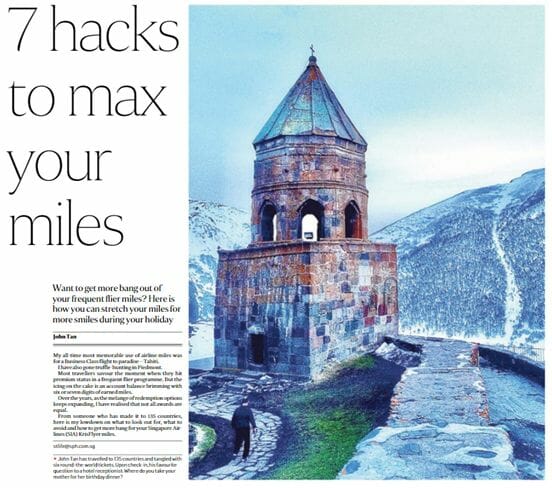 I agree with most points the author makes- you get better value by redeeming your miles for premium cabins, there’s very little point in redeeming short haul flights (because of budget airline alternatives), miles should be spent on flights instead of hotels or shopping, and Star Alliance awards are superior options to paying Advantage prices.

That said, I disagree with his assertion that “upgrades and full redemption awards work out to be about the same”, because the way I see it, upgrades are a terrible use of miles (even after accounting for mileage earned on the ticket). The only time where upgrades can make sense is when someone else (e.g your employer) is paying for the cash ticket.

I also hope he isn’t genuinely thinking of blowing 240,000 KrisFlyer miles on a Business Class round-the-world ticket. An Asia Miles MCA is a much better option for such itineraries, in terms of flexibility and price.

Can the second leg of a stopover trick be changed?

But my main point of contention concerns the US$100 stopover trick, which the author describes in his article. 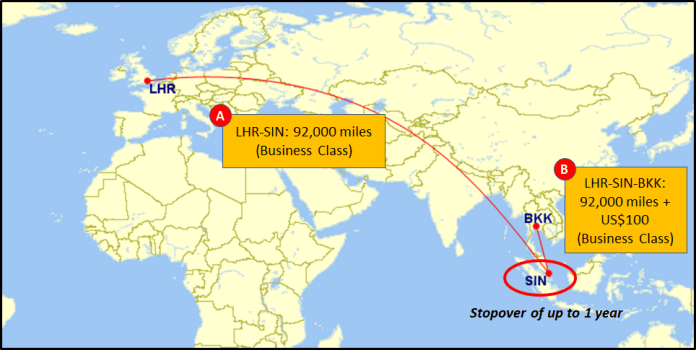 Your Singapore stopover can be up to a year, so you’re effectively adding an additional vacation’s flight for US$100 (+some small difference in airport taxes).

Whenever I teach people how to book a stopover trick, I continually emphasize the importance of confirming where you want to go for your second vacation, because  the when can be changed, but the where can’t.

That’s why this part of the article confused me:

Ever bought a ticket to, say, Beijing and then a buddy suggests a Michelin-starred feast in Tokyo instead? Besides date changes, award tickets allow a change of routing, even after a trip has commenced. Travel hack: For example, I flew the first leg of a Shanghai-Singapore-Dubai award. But in Singapore, I decided to drop my Oman desert sojourn (from Dubai) and go for a truffle hunt in Piedmont instead (from Milan). With the US$25 administrative fee and a top-up of additional miles for the farther zone and its related airport surcharge and fees, I ended up in Europe.

The author seems to be saying that he managed to change PVG-SIN-DXB to PVG-SIN-MXP after flying the first leg, for US$25 and the difference in miles + taxes.

But it’s always been my understanding (and experience) that once the first leg of a stopover trick has been flown, the second destination cannot be changed. You can change the date or timing of your flight, but your destination is locked in.

“An award ticket may be reissued, but only for travel by the same person and provided no part of the award ticket has been used.”

Changing PVG-SIN-DXB to PVG-SIN-MXP counts as a reissuance (unlike a date change), and since PVG-SIN has already been flown, it should not be possible to change the second destination.

So this claim has thrown me a bit, and I think there are two possibilities:

This could just be a classic case of YMMV, but I definitely wouldn’t book a stopover trick expecting that the second leg can be changed. Assuming it could, however, I also wouldn’t expect KrisFlyer to refund any difference in miles should my revised destination be cheaper than the initial one.

It’s refreshing to read a miles piece in the press by someone who actually knows what he/she’s talking about, but I’d urge caution regarding the point on changing a stopover trick.

I’d love to hear data points from anyone who’s managed to successfully change the second leg on a stopover trick after flying the first leg, so shout out below if you have.

Aaron Wong
Aaron founded The Milelion to help people travel better for less and impress chiobu. He was 50% successful.
Previous articleMy very silly mistake with traveling on separate tickets (or when interlining goes wrong)
Next articleSign up for Citi cards from 25-29 November and get S$250 cash (new-to-bank customers)

I was able to change my second destination from Tokyo to Seoul as well as push the dates back, after flying the first leg back from Sydney. I had to top up a small difference in miles + the $25 penalty.

Didnt have to appeal or escalate. CSO processed it like BAU.

Tokyo should be same number of miles as Seoul though? Any pps status?

The original itinerary was redeemed prior to the last KF devaluation, hence had to top up miles when I did the change to Seoul last month. No pps. Just KF Gold.

Same situation as WJ. Booked PVG-SIN-CDG and changed SIN-CDG to SIN-ZRH after flying the PVG leg. No hassle or escalation. No PPS; not even KF silver.

i’m thinking aloud here: could it be that if the change is within the same ZONE, it’s ok? (CDG/ZRH)

that said the author’s zones were clearly diff (DXB/MXP)

As written above, I wasn’t even allowed to change from SIN>KIX to either SIN>NRT or HND… c’est la vie..? or kink in system..?

What if you changed to a lower zone; I’m assuming the miles are forfeited, or can you pay a redeposit fee to get them back?

IF a change is allowed, the difference in miles should be forefeited. that’s why you can’t downgrade from an advantage to saver award unless you cancel the whole advantage award (US$50) and rebook a saver

I had this year unfortunately on two separate occasions where because of eleventh-hour work-matters, had to reschedule second-leg of a Stopover booking.. oddly, I used to think it was possible and even recall successfully doing so, last year.. but was told twice this year (so I assumed I remembered wrongly) that no change of destination after first-leg flown, and I even tried to ‘argue’ (didn’t kick up a fuss) that if I were to reschedule I’d no longer be able to get R on SIN>KIX because we were on the last Winter-Schedule A380 departure for SIN>KIX, so maybe instead we… Read more »

Another data point, amended destination from KIX to FUK on J after flying the first leg. Only needed to pay the penalty fee of SGD35. Just a lowly KF silver.