Changi Terminal 4: To close, or not to close?

On 16 April, Cathay Pacific relocated its Changi operations from Terminal 4 to Terminal 1, and at that point, the fate of Terminal 4 seemed to be sealed.

After all, Changi Airport Group had already floated the possibility of a temporary Terminal 4 shutdown, when it announced the suspension of operations at Terminal 2.

As far as I know, Cathay Pacific was the last airline operating regular flights out of Terminal 4, so I was dead certain that Changi would imminently be going from four terminals to two.

And yet, two weeks later, no official announcement has been made. Terminal 4 remains officially open, yet functionally closed, a sort of Schrödinger’s Terminal, if you will.

In terms of flights, Terminal 4 is a complete ghost town. I’ve been monitoring activity on the Changi Airport website, and I don’t believe I’ve seen a single arrival or departure since Cathay’s relocation.

All the remaining airlines have either been cancelling their scheduled flights, or suspended operations at Changi.

What’s also interesting is that with the closure of Terminal 2, Air India, Air India Express and Indigo were supposed to be relocated to Terminal 4, but Changi’s website has been updated to list these as “TBC”. 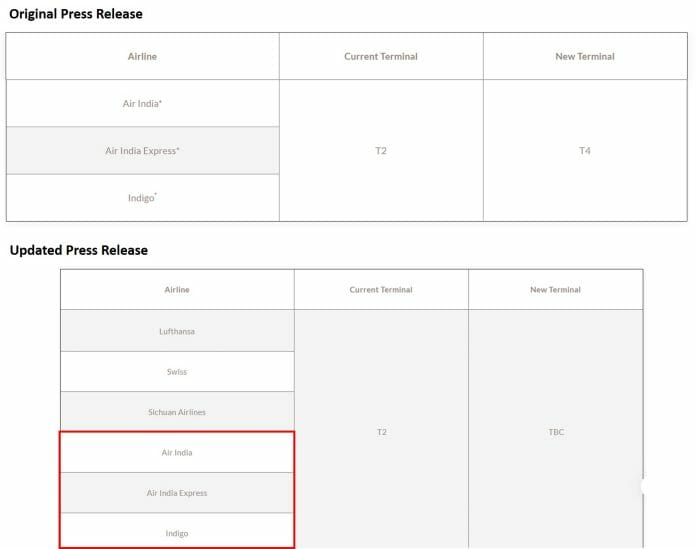 Looking ahead to the month of May, it appears that Korean Airlines hopes to operate one flight a week between Changi and Incheon, but whether that happens is something else entirely.

Terminal 4 remains accessible to the public, but the vast majority of F&B outlets are listed as “temporarily closed”, in line with the current Circuit Breaker conditions.

At the moment, the only Terminal 4 merchants currently operating are Bakery Cuisine, Cheers, Food Emporium, Goshin Ramen, One D-Cafe and Watsons. No disrespect to their wares, but I just can’t see anyone making a trip to Changi just to patronize them, so I assume they’re kept open for the benefit of those who work there.

Why hasn’t Terminal 4 been closed?

Which brings us to the question: if no flights are arriving or departing at Terminal 4, why does it remain nominally open?

I don’t know. Perhaps this has something to do with Changi Airport’s overall gameplan. Unlike Terminal 2’s “hard” shutdown, which is meant to accelerate renovations,  it was always the plan to put Terminal 4 into “standby” mode, ready for rapid reactivation once the situation improves.

And yet, it seems weird to keep shops and restaurants open if the terminal is meant to be in “standby”. I get that the staff need somewhere to eat and buy essentials, but wouldn’t it be simpler to rehouse them in other terminals? That’s not to mention the fixed costs that continue to be incurred like water, electricity, cleaning and security.

Of course, it could always be that the PR team simply hasn’t gotten around to announcing the closure because there are some formalities to be settled with staff and tenants. Watch this space, I guess.

Changi Terminal 4 remains officially open for now, but with no flights in or out, I can’t see that lasting very long. On the bright side, it should return to service as soon as things get back to normal.

Korean Air has scheduled flights to/from SIN for every Friday in May.

Not sure which terminal it lands or departs.

I think it’s not an easy decision for Changi and actually may not be up to CAG at all. Let’s wait and see.

Aaron, 1st May got 4 scheduled flights to land at T4.

just did a quick check and yes, i see 4x vietjet flights scheduled. however, none of them are open for sale on the vietjet website. these will either be cancelled, or are special repatriation flights.

It is official now.