Chope$ redemptions will resume on 17 Nov (instead of 3 Nov as originally announced), and when they do, expect to pay more.

Back in April, Chope decided to temporarily suspend all ChopePerks redemptions until 3 November 2020. Chope users would still continue to earn Chope$ on any fulfilled reservations, but there’d be no way to cash them out in the meantime.

I wasn’t so much surprised by the decision as I was the duration. Instead of hitting the pause button till the end of the Circuit Breaker, Chope decided to suspend the program for a full six months. Even the airlines weren’t cancelling their schedules that far ahead.

3 November is just around the corner, but Chope has now announced a slight delay in the resumption of ChopePerks redemptions-these will now resume from 17 November 2020 instead. 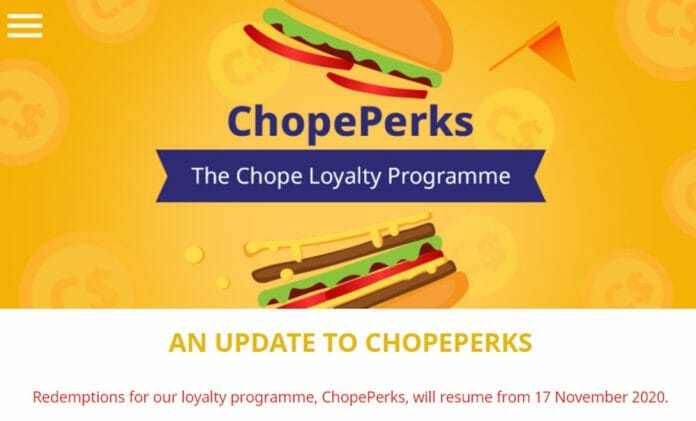 Oh, and there’ll be a devaluation too.

On 29 October 2019, Chope gutted the ChopePerks program by making the following changes:

These changes took effect from 1 November 2019, so Chope customers basically had 3 days’ notice. That’s extremely poor form, and no way to run a loyalty program.

But it looks like we’ll be seeing a second devaluation in slightly over a year, and this time, without notice. Nestled away in the ChopePerks FAQ is this little gem:

I’m not able to view any redemption options in the Chope app right now, but my understanding is that when they come back online on 17 November 2020, they’ll be reflecting the new prices. This is basically an unannounced devaluation, insofar as there’s no opportunity to burn your existing Chope$ at the current rates.

As a reminder, the current Chope$ redemption rates are:

When Chope carried out its devaluation last year, I spoke to a couple of folks from their marketing team. What concerned me is they didn’t seem to grasp why people were getting so upset. They went on about how great it was that Chope$ were being extended, and how there were now more denominations of ChopeDeals codes to choose from, but nowhere was there an acknowledgement that giving three days notice of a devaluation might be woefully inadequate.

This time round they’ve one-upped themselves by giving no notice at all. I wonder if Chope will use the same eDM banner for this announcement as they did the previous devaluation…

I remember fondly the days when Chope was one heck of a generous rewards program. There was a time when you could earn up to 700C$ per reservation, simply by stacking promo codes and LiveUp. While I appreciate those days can’t last forever, I still think there’s a proper way to go about communicating and implementing those changes- give adequate notice, don’t attempt to spin it.

As it is, Chope no longer runs a rewards program in my eyes. It’s at best a discount scheme, where all Chope$ redemptions come with a cash co-pay. Don’t get me wrong- I’ll still use Chope, since it’s convenient. However, I wouldn’t go out of my way to book a restaurant just because it’s on Chope, as there’s little incentive in holding Chope$.

Remember remember the 17th of November.

Actually I’ve been using chope for reservations out of convenience and never even knew they had a loyalty program haha :s

Been going on Quandoo, can cash out $15 cash for every 1000 points accumulated (roughly 10 reservations – not including points for review of restaurant yet)

Didn’t have an issue with them moving from vouchers to discount codes though, given it was so similar in terms of what the output is. 🤷🏻‍♂️

the main difference is that the discount codes have a minimum spend requirement, while the vouchers did not.

Clear that the minimum spend requirement benefits the restaurant. Not sure how it benefits Chope directly – are booking fees charged to the restaurant a fixed S$ amount or tagged to a % of overall bill

“I wasn’t so much surprised by the decision as I was the duration. Instead of hitting the pause button till the end of the Circuit Breaker, Chope decided to suspend the program for a full six months.” It’s clear from this that you have zero business sense. LOL.

It’s come to the point (as it has been since late 2019), that Chope is in the “have or not, nevermind” category of things out there. So they can devalue all they want, because they’re devaluing the business while they’re at it. If this is the only to route to viability, then Chope will fade away in due course.

believe they’re trying to entrench themselves on the restaurant side, business software. As you said, consumers will use them out of convenience but only if they happen to be the efficient way to book a restaurant. If the restaurant has their own native booking app, or there’s another app, consumers will no longer go out of their way to use Chope.

That’s been my experience at least.

I just google and call the restaurant.

Heck, you don’t even have to input the number anymore. Just click on “Call” and it’s automatic!

And you get to talk to a human.