Perennial favourite Lobster Thermidor is returning to the Book the Cook menu in Business Class, with a lighter spin.

At long last, a perennial Book the Cook favourite has returned- but not quite how you remember it.

Singapore Airlines has restored Lobster Thermidor to its Business Class menu out of Singapore for the first time since the pandemic began, updating the dish with a lighter spin (though it’d be a stretch to call it healthier).

This new version also replaces the lobster thermidor in First Class, with a brand new Book the Cook menu set to roll out from January 2022.

Last month, Singapore Airlines’ Global F&B Director Antony McNeil shared with Executive Traveller the direction it was going with the new Book the Cook service, and Lobster Thermidor in particular.

There’s also an update for the iconic first class Lobster Thermidor, which McNeil acknowledges as “a perennial favourite” where any tinkering made with modern health-conscious tastes and sensibilities in mind must “maintain the integrity of the dish.”

“The lobster is the same, and the same size, just we’ve gone a little bit more authentically European to match the European style of the dish,” McNeil tells Executive Traveller.

“You have a fondant potato, which is basically a grilled potato that’s slowly simmered in stock so it takes up all the flavours from the stock.”

“And then we have a roasted pumpkin and kale saute, if you want call it that. It’s a lot more light, and a little bit more healthy, just to offset the richness of the Lobster Thermidor and the flavours there.”

The end result, as described by the Book the Cook menu, is Lobster Thermidor with Fondant Potato and Buttered Seasonal Vegetables.

Lobster Thermidor, a classic French dish, where the lobster meat is cooked in a rich cream sauce, enhanced with Cognac and Dijon mustard, with the addition of button mushrooms and herbs fine, the Lobster is returned to the shell, topped off with grated cheddar cheese, and finished off to create an oven-browned cheese crust.

The description is the same across both the First and Business Class menus, although Lobster Thermidor will only be available on Business Class flights with a flight time of more than 3.5 hours. I also suspect that just like the previous menu, First Class passengers can expect a whole lobster, versus just a lobster tail in Business Class.

Executive Traveller reported in 2019 that  SIA was thinking of a lighter, healthier version of its lobster thermidor, again quoting McNeil:

“People like lobster, but we’re moving to an environment where people are becoming more health-conscious so maybe the creamy lobster dish is not the right one… maybe a beautiful grilled lobster with fresh asparagus or veggies might be another alternative, as long as we maintain the integrity of the dish.”

It appears they may have lost their nerve a bit, because the new lobster dish, while lighter, would hardly pass for health food (or perhaps there’s another version yet to come when the full menu is unveiled in January 2022; see below).

Frankly, I was never a fan of the old lobster thermidor. Sure, I love lobster as much as the next man, but found this presentation way too heavy, what with the gratuitous amounts of cream and cheese.

Cheese is an easy chef’s trick to hide shellfish meat that isn’t the freshest, and while I understand the need to boost umami and richness for the inflight palate, I’d much prefer a cooking method that lets the natural sweetness of the lobster shine instead of burying it.

Book the Cook options from Singapore

First and Business Class passengers out of Singapore can choose from the following options:

Book the Cook selections must be made up to 24 hours before your flight, and is available for flights above 90 minutes and for all meal services except Continental Breakfast and Refreshment.

Book the Cook service is temporarily suspended for Premium Economy Class “due to regulations”.

Book the Cook options to Singapore

On the way to Singapore, Book the Cook service can also be enjoyed by passengers departing from the following cities:

If you’re a fan of the old lobster thermidor option, it’s still available for First Class passengers out of Sydney!

For those who want to check out what’s being served onboard before deciding to Book the Cook, Singapore Airlines inflight menus can be viewed online up to eight days before departure.

Simply enter your flight number, cabin class and date of departure to pull up the relevant menu. 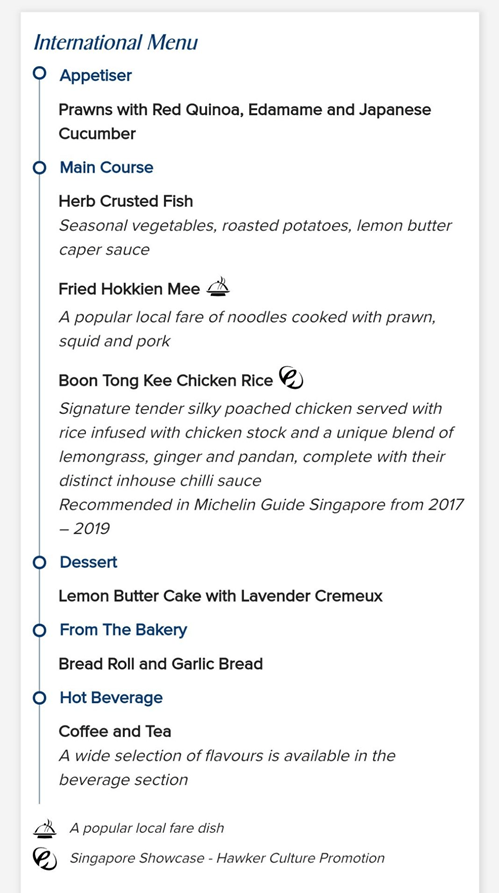 You can also view the inflight menu via the Manage Booking function, under the following tab.

SIA’s culinary team is currently in the final stages of signing off on the new Book the Cook menu, which is expected to come online in January 2022.

I’m really hoping we’ll see alternative takes on lobster for passengers who prefer something even healthier, or better yet, Asian versions of the dish. A nice lobster laksa, a Cantonese-style ginger scallion lobster, lobster fried rice, or lobster in chili crab sauce all seem like winners in my head.

Singapore Airlines is bringing back Lobster Thermidor to the Business Class cabin, and giving the dish a lighter update. While decisions like this will always polarise opinion, SIA has said that it’s ready to make changes and bring back the previous version if need be.

If you’re flying in First or Business Class in the near future, do send some photos of the dish in the wild.

Sounds like it’s time to give it another try. The one and only time I had it, I couldn’t eat more than a couple of bites — too salty and heavy, especially for a flight

The classic LT was a must have for me whenever BTC offers it. Delish. Even ordered it for lunch and dinner once…lol. The new one looks kinda dry

How is lobster laksa any lighter or healthier?

My problem with dining is the reduction in number of meals. For SYD routes, I thought used to be 2 meals? I’m seeing 1 meal these days… For an 8hr flight seems a little off, I thought 8hrs would cross 2 dining windows (bfast+lunch, or lunch+dinner) or at least meal+refreshment

Also I am seeing that supper service doesn’t cater satay entree, or cheese post-meal. A couple of favourites of mine. Actually I can’t remember the last time I had business class satay, having had a bit of a run of very early morning departures with supper service pre-covid.

Wondering if COMO cuisine back on SQ. Easier on the tummy and the buckwheat pancakes taste just like those they serve at COMO Bhutan. Yummy. The lobsters ex SFO and LHR seems larger than those ex SIN. The dish is for novelty. After one try, no way hosay. Its way to rich to consume for a flight and the amount of meat in those crustaceans leaves me wanting. They just cover it with cheese and cream to make you full. Usually off the menu items looks fresher and more delicious.

Didn’t they had that Indian lobster dish for F pre pandemic, was that gone?

Also I find it ironic that Laksa can only be order for flights above 4 hours in J when they serve this stuff in regional Y based on the new short haul Y service with the cardboard boxes.

Yup they did have one, it hasn’t returned yet

The cost cutting in premium cabins is very apparent. Most of the sophisticated international cuisine with the more expensive proteins (beef, lamb, fish, lobster) have been replaced by much, much cheaper “hawker favourites”. Anyone also wondered what happened to Kyo-Kaiseki?

The full cheeseboard service seems to have been cut back too and is no longer available on Australia flights. Oh and the wine…let’s not even get started with the cheapo pours they’re putting in Business Class now. Probably goes with the lousy presentation of meals…a far cry from what SQ used to do. No care for quality whatsoever nowadays.

Just off a long SQ flight, J catering noticeably worse than pre-covid, both BTC and a la carte.

Can we also agree that the instant noodle snack thing is not befitting of a supposedly premium product?

Agree that there are cutbacks but get some perspective here. It’s the worst crisis they have faced in their existence (probably for you and me too) and they are not even out of it yet. I mean, nobody was flying until barely 3 months ago. Give them some time to recover.

Yes. The thinking must be that anyone flying right now is choosing airlines based on factors beyond inflight service (ie direct flights, VTL etc). Therefore the very apparent cuts..

“Could I have an amenity kit?”

“Sorry, amenity kits are for economy class only. In business we provide its products inside the lavatories”