Travellers departing to New Zealand from 21 June will no longer require a pre-departure test, though post-arrival testing will remain.

New Zealand will scrap its pre-departure COVID-19 test requirement for international travellers departing to New Zealand from 21 June 2022, more than a month earlier than anticipated.

“We’ve taken a careful and staged approach to reopening our borders to ensure we aren’t overwhelmed with an influx of COVID-19 cases. Our strategy has worked and as a result it’s safe to lift pre-departure test requirements much sooner than planned.

We had intended to remove the requirement for travellers to have a pre-departure test by 31 July. But with cases continuing to decline despite over 387,000 arrivals since borders reopened there is evidence this measure can now be lifted.”

However, the post-arrival testing regime will continue for now. This involves two unsupervised, self-administered ARTs conducted on the day of arrival and five days later. Full vaccination will also remain a mandatory requirement for most travellers.

As a reminder, New Zealand’s borders are currently open to Australia and New Zealand citizens, as well as nationals from visa waiver countries such as Singapore, Malaysia, Germany, the UK, and USA.

New Zealand anticipates a full reopening of its borders by 31 July 2022.

Up till 20 June 2022, travellers to New Zealand (aged 24 months and above) will be required to present a negative result from one of the following COVID-19 tests:

Supervised antigen tests are acceptable, which start from S$9 (plus the cost of your own ART kit) in Singapore.

From 21 June 2022, pre-departure testing will no longer be required for travellers departing to New Zealand from anywhere in the world.

Travellers whose first international flight to New Zealand departs after 11:59pm (NZT) 20 June 2022 do not need pre-departure tests. This applies to people entering New Zealand from anywhere in the world.

If your flight to New Zealand departs before 11:59pm (NZT) 20 June 2022, you still need to meet pre-departure testing requirements.

Most travellers still need to be vaccinated, and take 2 rapid antigen tests (RATs) after arriving in New Zealand.

Do note that because of the time zone differences, the cut-off timing for flights departing from Singapore is 7.59 p.m SGT on 20 June 2022.

If your flight to New Zealand departs before this time, you’ll still need to show a pre-departure test at check-in.

While New Zealand is removing its pre-departure test requirement, post-arrival testing will remain for now.

Testing is conduced through unsupervised self-administered ARTs (referred to as a ‘RAT’ in New Zealand), and must be done:

During my trip to New Zealand, I received three free kits on arrival at Auckland International Airport (presumably they give an extra in case one turns out to be a dud).

No isolation is required before/after either test. Results from both tests (whether positive or negative) must be reported via a link sent to the email address you provided in the NZ Traveller Declaration (read below for further details). 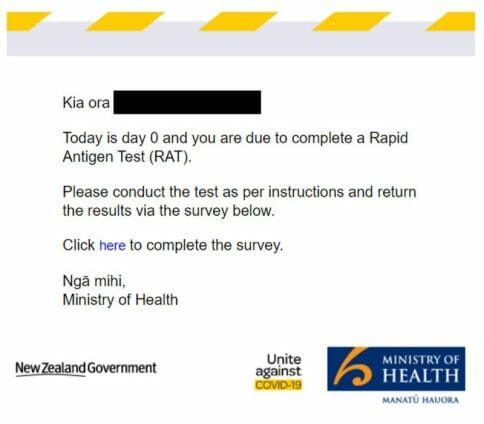 The survey is extremely simple, with just two questions to complete. You do not need to submit a photo of the result. 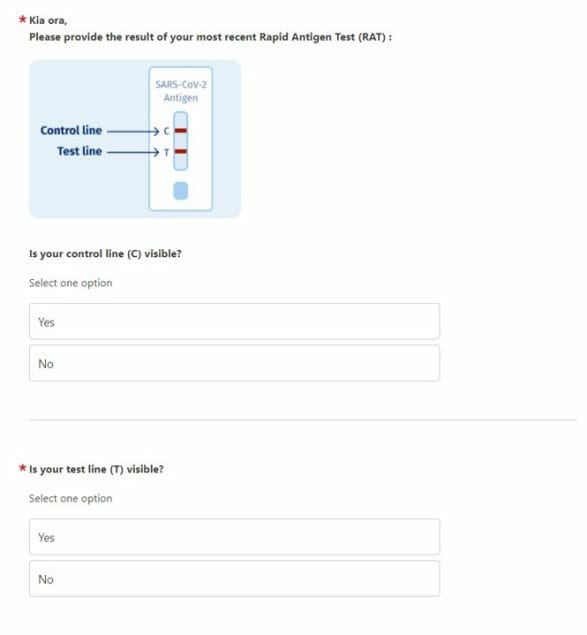 If your result is positive, you must isolate immediately and seek a PCR test as soon as possible. If this comes back positive as well, a 7-day isolation must be served (the day you got a positive result is considered day 0).

Here’s a summary of the requirements for travel to New Zealand, effective 21 June 2022.

Singaporeans and nationals of other visa waiver countries (regardless of age) must apply for an NZeTA before departing for New Zealand. APEC Business Travel Cardholders with “NZ” on the back of their card are exempt.

An NZeTA is valid for unlimited entries over a two-year period, and costs:

On top of this, an International Visitor Conservation and Tourism Levy (IVL) of NZD$35 must be paid at the time of applying for an NZeTA, so the total cost will be at least NZD$44 (~S$40).

The NZeTA app is simple enough to use, and I was impressed that when I scanned my passport, the system was smart enough to know that I had an APEC Business Travel Card. My records were updated automatically, and I didn’t have to pay any fees. 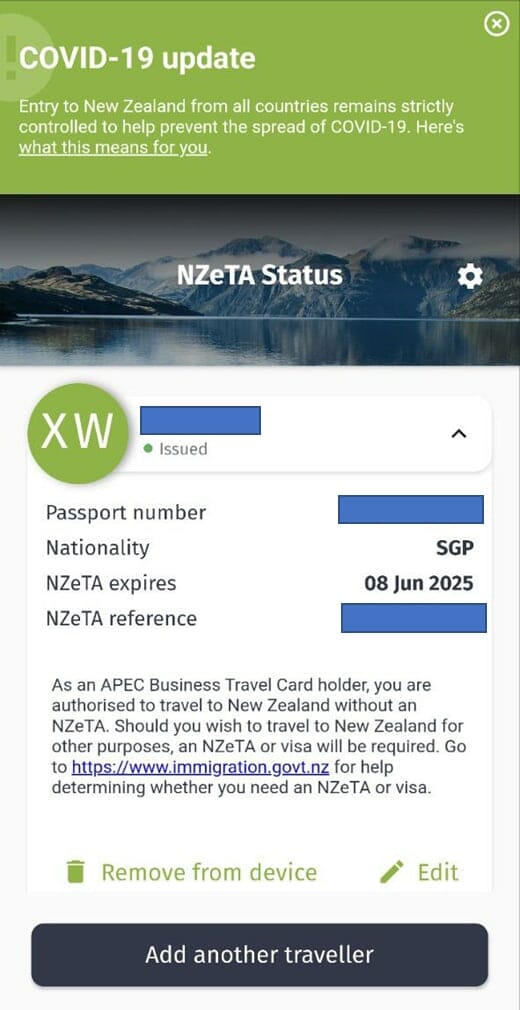 The MileLioness did not have an APEC card, so she applied via the usual route. This involves scanning your passport, taking a selfie and confirming your personal details. Approval for her was instant, but travellers are advised to allow up to 72 hours for processing

AMEX, Mastercard and Visa are all accepted for payment; be sure to pay with an AMEX-issued card if you want to earn points (since it’s likely a government MCC).

All arrivals to New Zealand by air (regardless of age) must complete a New Zealand Traveller Declaration prior to check-in. This is free of charge; beware of lookalike websites that levy a fee!

You can start a Declaration 28 days before departure. Travellers departing for New Zealand up till 20 June 2022 must upload their pre-departure test results within 24 hours of departure (assuming they’re taking an ART). Partial progress can be saved and continued later, via a code sent to your email.

We recommend you start your declaration as soon as possible and complete all steps except uploading your pre-departure test. Your declaration will be automatically saved and a link will be emailed to you.

If you’re departing from 21 June 2022, a pre-departure test result is not required, allowing you to complete the Declaration much sooner.

Successful completion of the NZ Traveller Declaration generates a Traveller Pass with a QR code, which you’ll need to show at check-in and upon arrival in New Zealand.

I visited New Zealand back in early May, as soon as the borders opened. If you’re planning to head over, be sure to have a read on the pre-departure logistics (you can ignore the section on testing from 21 June), as well as reviews of the lounge situation and insights into day-to-day life over there.

New Zealand will scrap its pre-departure test requirement from 21 June 2022, removing another item from travellers’ checklists. While post-arrival testing will remain in place for now, there really isn’t much to it- collect your free tests on arrival, and follow the instructions.

If you hold a passport from a country that isn’t part of the visa waiver programme, sit tight. New Zealand’s full border reopening has already been locked in for 31 July 2022, and who knows- if things move in the right direction this could be brought forward even more.

Thailand Pass to be scrapped from 1 July

I thought NZ was the slowest in the world to ease Covid restrictions. But I was wrong. It is Japan. NZ gets #2 spot.

Any chance that the post arrival testing requirements be removed by end July?

Hi there where can i find your NZ pre departure logistic article?