You can now top-up your Amaze wallet with a Mastercard or Visa, but it's very hard to see who would find this useful.

2022 has not been kind to holders of Instarem’s Amaze Card.

Make no mistake: this is last days of Rome stuff, and when Amaze inevitably gets added to the exclusion lists of other banks, they’re going to have to dig deep to find reasons for customers to stay.

I don’t know what those reasons might be, but I do know it’s not the newly-enhanced Amaze wallet.

The Amaze wallet has historically been a closed-end solution. Instarem would credit your quarterly cashback earnings here, which could then be spent through the Amaze Card. There was no option to manually top-up the wallet further, nor could customers withdraw the balance to a bank account.

The latter still can’t be done, but Instarem has added a new feature which allows customers to top-up their wallet balance using a credit or debit card (I’m not sure if this has been rolled out to all customers yet, or whether it’s part of an A/B test). 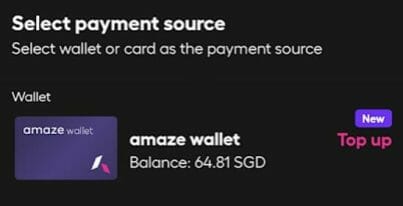 A minimum top-up of S$20 is required. While the Amaze Card can only be paired with Mastercards, Visa cards can also be used to top-up the Amaze wallet (support for PayNow will be added soon). 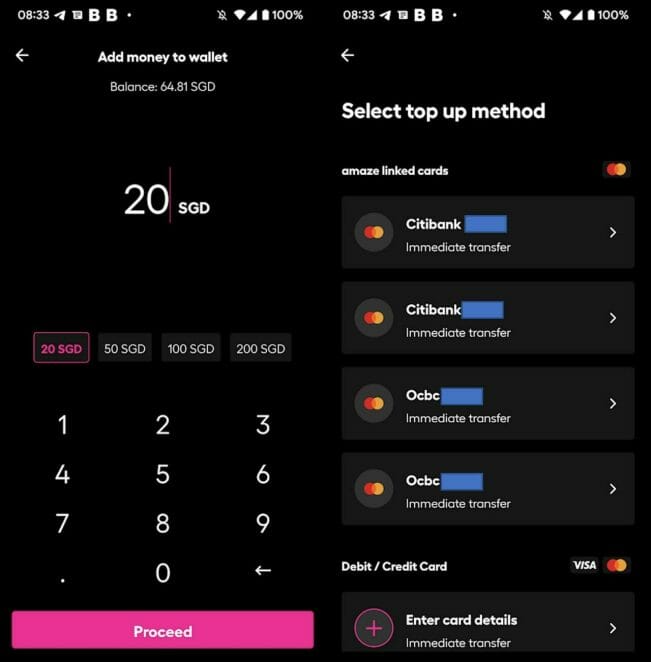 The wallet balance can then be used for overseas spending via the Amaze Card, at the prevailing Amaze FX rates.

What are the use cases?

It should come as no surprise that Amaze wallet top-ups code as MCC 6540 (POI Funding Transactions). This MCC is on the exclusion list of every bank in Singapore, so you won’t earn miles, points or cashback for funding your wallet. 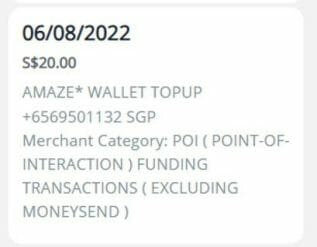 Long story short: by topping up and spending through the Amaze wallet, you are forgoing the opportunity to earn rewards on your overseas spend.

This makes it a non-starter for me, seeing as how I can earn 4 mpd on my overseas transactions by pairing the Amaze with the Citi Rewards (or some of these other cards).

Furthermore, unlike multi-currency cards such as Revolut or YouTrip, the Amaze wallet balance is held in SGD only. Your foreign currency spending will be converted into SGD at the time of transaction, based on the prevailing Amaze FX rates. Therefore, you can’t use the Amaze wallet to pre-emptively lock in a good exchange rate.

For example, the SGD is at all-time high versus the Euro. A Revolut or YouTrip cardholder could top-up their EUR wallet today, locking in the rate for transactions in the future. An Amaze cardholder has no such option.

The only use case I can think of is making a small top-up in order to cash out a larger balance. For example, if your Amaze wallet has S$65, you can’t use it to make a S$100 transaction unless you top-up a further S$35 (Amaze does not allow the combination of two funding sources for a single transaction).

But even this is a stretch, thanks to the GrabPay option. Why not simply top-up your GrabPay account with S$65, withdraw it to a bank account and call it a day?

Amaze users can now top-up their wallet with Mastercard and Visa cards, though I really fail to see the point (in more ways than one). It’s nothing to get excited about- even the vain hope that there might be a brief period where the Amaze wallet MCC was miscategorised has not materialised.

Amaze, sadly, is on a downward trajectory. It’s still my card of choice for overseas spending, but I think everyone’s unhappily aware that the party’s winding down.

As of time of this article, only Android phones has this function..

Thanks for the dp!

Does it still convert offline spend to online?

Another use case for top up is to cash out the odd cents in the Amaze wallet via Grabpay since Grabpay only allows top up in multiples of $1.

Yes that’s the only use I can see for the top up function too.

just top up to revolut and withdraw

Yes it’s sad that Amaze card is on a downward trajectory. The exchange rate is not good anymore although you can earn points for cashback. However i would rather have good FX rates and forego any points or cashback scheme which is troublesome to redeem.

You know the card is “near the end”, when they nurf anything worthwhile and then spend time and resources to introduce features that are totally useless than have no use case. Seems their management have “rocks in their head”.

Say what you might but the fx is still cheaper than anyone else, esp. cards who charge 2-3%. Wallet is for those who don’t have MC but still want the better fx. Everyone hs to make money lah.