I’d been brainstorming a few ideas on how to get from Singapore to New York for my September mecca to the US Open. I could

I was playing around with the Lifemiles search engine today when I realized that Chicago (ORD) is only a 2 hour flight from New York. I can live with that, I thought. So I started entering different permutations into the system and this is what happened- 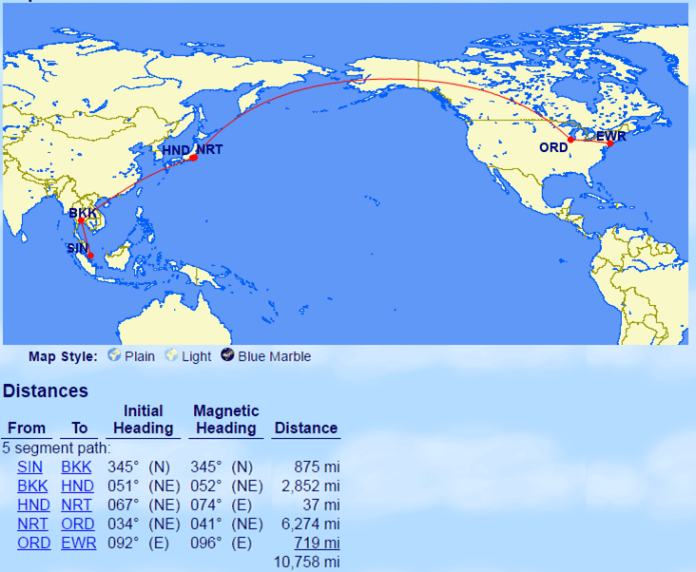 When I showed this routing to my mother, she thought I was crazy. Then again, she doesn’t understand why I need to have 10 different credit cards either. As those of us in the hobby know, sometimes getting there is half the fun.

And this is a convoluted way of getting to New York, but I’m really excited about this routing because it lets me try some really good premium cabin products… 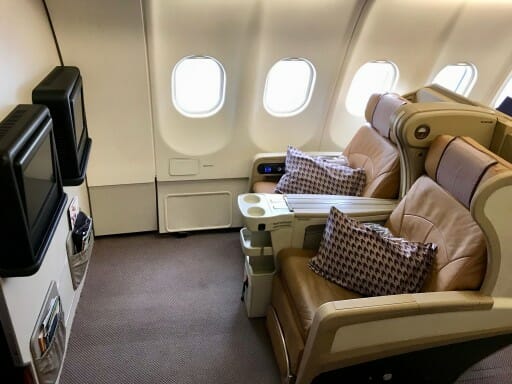 The trip starts off with SIN-BKK on SQ978. SQ, as you remember, very rarely releases anything other than its regional business class product for partner redemptions. But this is more than sufficient for the short 2.5 hour flight.

And besides, it’s essential to get to Bangkok, where something better awaits… 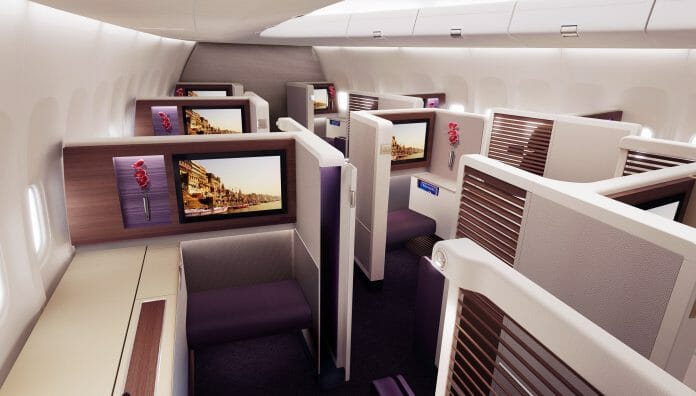 That something better is the Thai Airways new first class product. I have never flown Thai in First, so this is something I’m really looking forward to. I have a 3 hour transit in Bangkok so that should be enough time to do a review of the first class spa there and try out their first class lounge. Detailed reports to follow.

And, I get to fly with a very old friend ,the B747. The last time I flew the B747 must have been more than 10 years ago, back when it plied the SIN-SFO routes. I was very careful to make sure that the equipment indented had the new, Suites-style first class and not the older product, shown below. 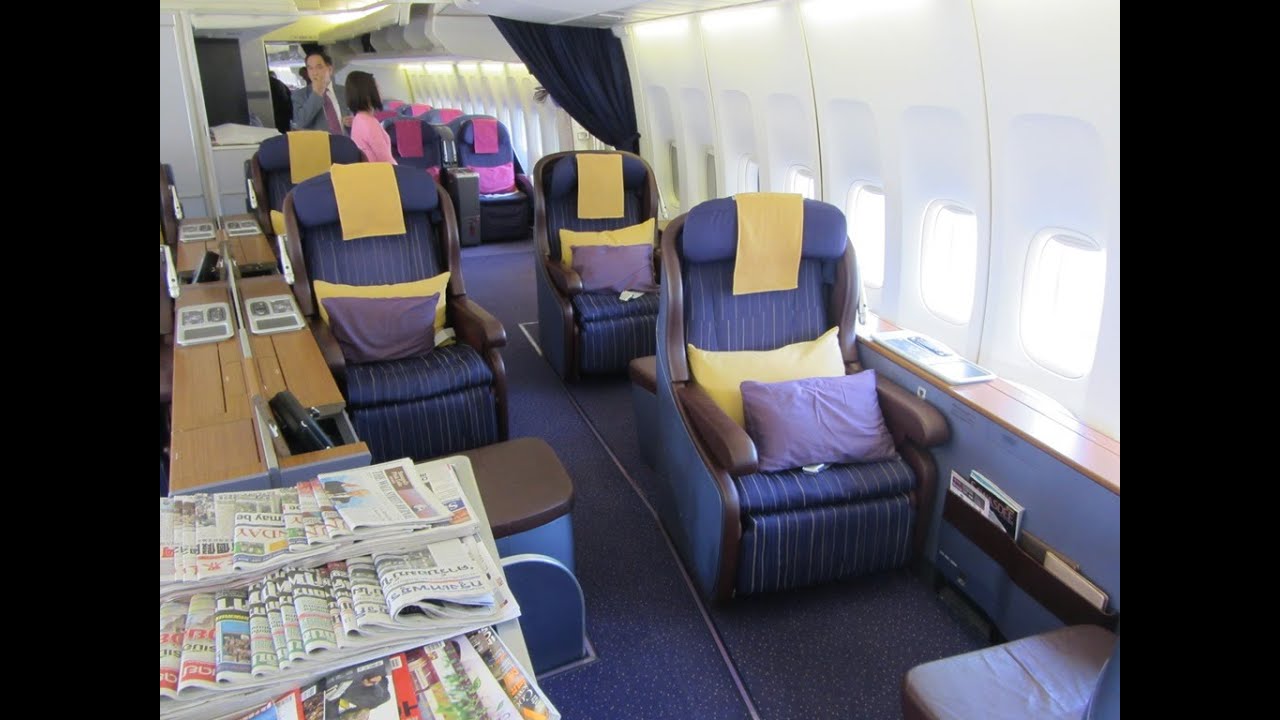 But then again, Thai is infamous for last-minute equipment swaps, so you can never be too sure.

This will bring me into Haneda airport, where it will be time to make an interesting transit…

HND-NRT, Limo Bus, which seat can I take? 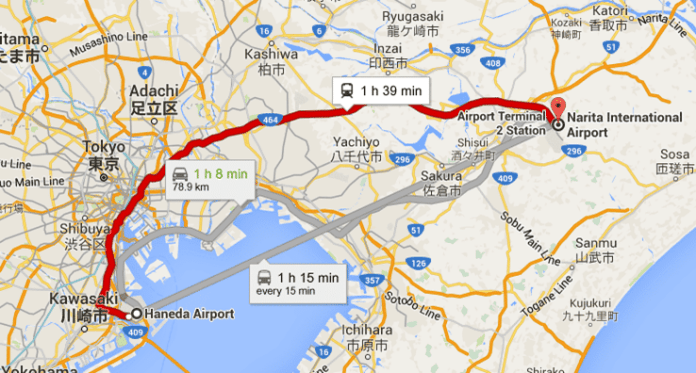 Yup, that’s right. I need to transfer from the HND to the NRT airport to get on the next flight. Fortunately I have 4 hours to make the connection.

There is a wealth of options to get from HND to NRT, but I think I’ll take the limo bus which takes 90 minutes and costs JPY 3100. 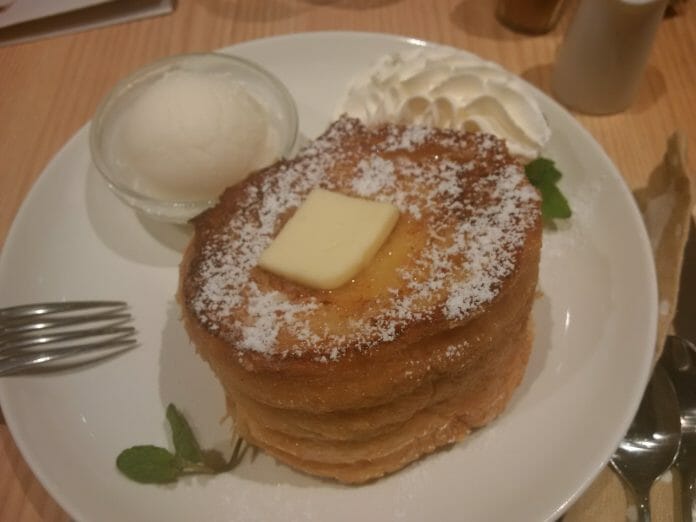 I’m tempted to make a quick stop in the city to have some amazing french toast at Ivorish, but there’s extra impetus to get to Narita airport early to enjoy the lounge for my next leg… 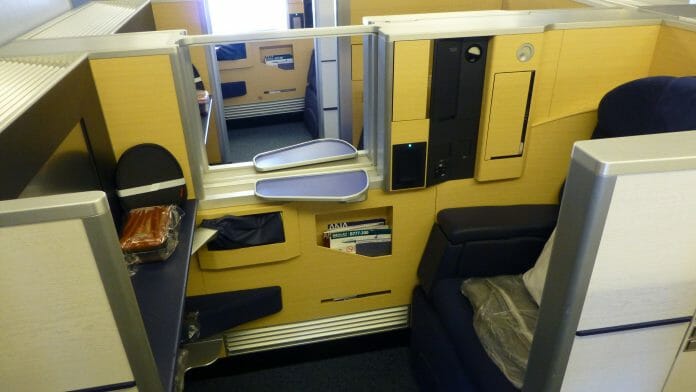 I’ve reviewed the ANA First Class product before from Seattle to Singapore, and I think it’s an excellent hard product. I’m also looking forward to the chance to have Ippudo ramen onboard. 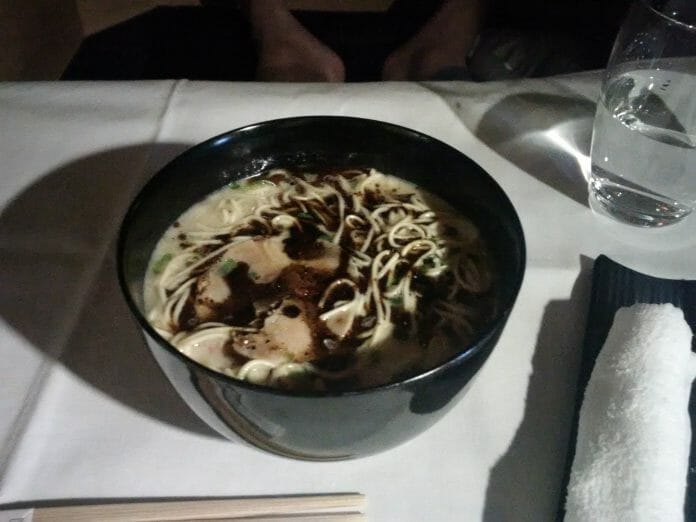 Unfortunately, ANA no longer issues Rimowa amenities kits, but their replacement Samsonite ones aren’t half bad (doesn’t stop the weeping and gnashing of teeth on FT though)

Well, I didn’t say the routing was perfect. (I had to manually add this on and pay cash because the Lifemiles engine wouldn’t offer me the final leg to EWR/JFK)

Does this routing take away precious vacation time? Well I depart SIN at 635pm on Friday and arrive in EWR at 1.50pm. If I took SQ26 I’d be touching down around 11am (because the flight leaves much later on Friday), so it’s really not that big a difference.

This routing was only possible because Lifemiles recently started making mixed-cabin class redemptions available, which was a really positive development. I’ve not arranged the flight back to Singapore, but I imagine I will try my best to redeem some Krisflyer miles (given that it’s generally easier to redeem tickets into SIN than out of it)

Any way you look at it, to get to try both Thai and ANA First Class on the same trip for under S$2K (I’m excluding the cost of the ORD-EWR leg) is a miracle in itself.  So if you haven’t done so already, please go and open up a Lifemiles account so you can take advantage of the next sale.

Now, if only there were a way to hack US Open tickets…

Lol! Just careful with TG changing aircraft last minute as it happened to me last month twice
Fantastic routing ???
How you coming back btw?

coming back is yet to be determined. I’m waitlisted on SQ and CX flights out of JFK, SFO and LAX though. I realised that for one way travel, SQ awards might be on par/slightly better than CX. Although the surcharges are higher, CX charges 85K miles vs SQ’s 68k (at least from west coast).

Yes! Please inform us if there’s a US Open hack, apart from the SPG Moments US Open Suite tickets! (so sad to have NO points or status whatsoever with SPG as I would definitely have taken advantage of this. Or Adele.)

ANA F is awesome. Sad not to have the Rimowa kits too 🙁 so I let my mom have the ones I got from the flight.

Looking forward to the trip reports! And hopefully there will be an out-of-place-but-still-as-exciting US Open post!

That’s actually what I had in mind…25,000 points for 2 people in a special suite is a phenomenally good deal. Got to grab one when it comes available in July. And I’ll be sure to write about the US Open too, have been thinking about expanding the types of posts here!

28 blessed years as of yesterday.

What! I’m impressed by all your work at such young age. Happy birthday and hope u had a blast! 🙂

thank you. I’m starting to feel it in my bones.

Thank you. Everything I’ve accomplished is a blessing from God and not through my own work. I believe I spent the day reading and playing tennis, which is a blast by my standards 🙂

Yesterday! Happy Birthday! with this routing you officially graduate from enthusiast to crazy. haha

Hey. Now u sound like his mum with her first reaction LOL. Joking.

thank you sir. read the FT trip reports, you’ve not seen crazy yet…

i think you’re absolutely right about that. last night i had a small piece of muskmelon and now I am ruined for life already. Apparently a muskmelon costs $120 at isetan.

and it was the most amazing thing i ever tasted

I finished the entire plate at the club lounge of ANA Intercontinental 2 years ago. The staff did not replenish.

no way. that’d be like a hotel lounge leaving out krug.

i am scheming various ways to get my hands on another musk mellon. it will be my life’s goal.

Aaron, you mentioned it’s generally easier to redeem tickets into SIN. Does that apply to award redemption for JFK-FRA-SIN too?

i’m speculating, really. i don’t have hard evidence there are more seats available, just that i’ve noticed when i’m trying to book round trip tickets that it’s the inbound leg into singapore that tends to have at least waitlist saver availability, even when the outbound leg doesn’t. phil is quite right that you’d be competing against card churners in the US for award space given that krisflyer is not a transfer partner. this might be better in non-US destinations.

Is there any more info about asia miles? Im curious to know if all cards support them! Look forward to more Asia miles posts!

Are there any specific cards you recommend using when buying lifemiles?

or if you’ve not maxed out your DBS woman’s card, use that for 4 miles

yeah, they’re definitely not processing payments in singapore. so if your forex airline ticket purchases get you 4 miles per $1 on uob visa signature this will too (haven’t tried but see no reason why not). Just remember the S$1K min spend per month required

blessed birthday! btw how did you generate the routing on the map ?

thanks! you can use this tool http://www.gcmap.com/

$2,200 is only one way right? If you consider the cost of doing this two ways, wouldn’t it be only a bit cheaper than buying a non SQ business class ticket outright and saving yourself the hassle of 4 transfers + the big haneda-narita hop?

that’s a fair point. Yes, $2,200 is only one way. But there are some other things to consider (1) A return business class ticket from SIN-JFK is about $8.3K (2) I want to fly in to New York and fly out from San Francisco / somewhere else on the west coast, so that will further increase the cost of the ticket (3) I view the transaction more as “cash out of pocket”- given that i bought the lifemiles outright that is a cash outflow, but for the return back to Singapore I intend to either use Asiamiles/Krisflyer, meaning that the… Read more »

Yes we probably have slightly different considerations. While I do like trying new premium products, my priority is to get to a destination conveniently (and of course comfortably) without paying an arm and a leg. With that in mind, I actually don’t mind paying the exorbitant SQ surcharges based on convenience/product. I’ve also noticed that on the Lifemiles page, when you look for business class routes, I end up getting bad mix class options (SIN to HKG on business and HKG to LAX on economy??). Have you had this experience? Great site btw, keep it up! I like the way… Read more »

thanks nicholas! i’m still learning a lot about this and don’t always get it right, but it’s great to be able to share what i know.

mixed class options are a blessing and a curse in the way- i’ve noticed that when trying to book flights to the states. Typically what happens is i’ll get short haul business availability and the long haul stuck in coach. hardly ideal. eg SIN-NRT-SFO with SIN-NRT in ANA J and United Y (bleagh), or SIN-BKK-LHR with SIN-BKK in SQ business and BKK-LHR in TG Y.

The Longest Flight in the World: Trip Planning – The MileLion

[…] already visited New York quite a few times, so instead of exploring the city again I’ll take a connecting flight to Houston where […]