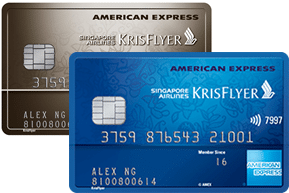 The KrisFlyer Ascend is the more premium offering of the two, with a $50,000 income requirement and a non-waivable $337.05 annual fee (unless you’re an AMEX Platinum Charge cardholder, in which case your subsequent renewal fees are waived).

That annual fee brings with it additional benefits, such as

If you’re currently holding an AMEX KrisFlyer Credit Card, AMEX is offering an additional incentive to upgrade to the KrisFlyer Ascend.

Get 12,000 bonus KrisFlyer miles when you upgrade to the AMEX KrisFlyer Ascend

If you’ve held an AMEX KrisFlyer Credit Card for a minimum of nine consecutive months and spent $10,000 or more within the past 12 calendar months, you’ll be receiving an email invitation to upgrade to the AMEX KrisFlyer Ascend.

Applying through the link in the invitation gets you 12,000 bonus miles when you’re approved and spend at least $1 in the first month.

Here’s the other rules:

The T&C make no mention of meeting the AMEX KrisFlyer Ascend’s $50,000 income requirement, so I’m assuming they’re going to waive that for applicants who go via this route. As we all know, any income requirement above the MAS mandated $30,000 minimum is purely arbitrary anyway.

Successful applicants who spend $12,000 within the first 6 months of membership will get a total haul of 56,400 miles. This is broken down as follows:

Is the AMEX KrisFlyer Ascend worth it?

The most valuable feature of the AMEX KrisFlyer Ascend is probably the annual complimentary Hilton night, especially since they recently expanded the list of eligible properties. Your value of this benefit will of course depend on where you stay, but I think a good conservative benchmark is about $200.

Hilton Silver is the second lowest tier in the program, but don’t underestimate its usefulness, especially if you’re in the market to buy Hilton points. That’s because members with Hilton Silver status and above get the 5th night free on award night redemptions, which can be a significant saving.

The fast track to KrisFlyer Elite Gold can be useful for people who often find themselves in the position where they buy tickets for their whole family/colleagues. You can’t earn elite miles on tickets flown by someone else, but the AMEX KrisFlyer Ascend allows you to turn that spending into status for yourself. KrisFlyer introduced some new status benefits for Elite Gold members, but I wouldn’t hold my breath about things like upgrades or any out-of-this-world treatment.

This just leaves the sign up bonus as the other reason why you might be willing to pay the annual fee. It’s true that a haul of 56,400 miles for $12,000 of spending is more than decent, but there are other sign up bonuses like the DBS Altitude AMEX which don’t require you to pay the first year fee.

If you value the incremental benefits of the AMEX KrisFlyer Ascend enough to pay the non-waivable $337.05 annual fee, and have already hit the $10,000 spending threshold, then this is a good way to snag some additional miles when upgrading.

That said, I probably would not be inclined to go out of my way to hit $10,000 in spending on my AMEX KrisFlyer Credit Card just to take advantage of this offer.

Aaron Wong
Aaron founded The Milelion with the intention of helping people travel better for less and impressing chiobu. He was 50% successful.
Previous articleAnnouncing The Milelion’s Monthly Miles Meetup for February
Next articleGet up to 35% off in Hilton’s Asia Pacific Resorts sale

From now till 31 August, DBS Altitude cardholders can earn up to 4 mpd on online and offline shopping- but it's too much complication for too little payoff.
Read more

What’s the best credit card to use for SimplyGo and public transport?

Don't leave miles on the table when you ride the bus or train. Here's the credit cards offering rewards on public transportation.
Read more

Amex is clearly having trouble coping with their customer service after the influx of new card holders.. Quite disappointing actually.. though they offered me a service recovery of 10k miles, I am not sure if I will continue once the annual fee is due..

FYI Amex recently waived all but $2 of my annual fee for my Ascend card after I tried to cancel it.

Was this the first year annual fee or subsequent year?

Hi Aaron
What is the application must be submitted and approved by 31 Mar 2019?
I applied the krisflyer card and get in Apr 2919