Many credit cards offer complimentary travel insurance, but is it sufficient for your needs?

Complimentary travel insurance is a common perk offered by many credit cards in Singapore. Cardholders can activate this coverage simply by charging the cost of their air tickets to their cards.

So here’s a question I get a lot:

Unfortunately, the answer’s not so straightforward. Like everything in miles and points, it depends on what you’re looking for.

It’s hard to give a definitive “best” because there’s so much variation at play- policies differ in terms of definitions, types of coverage, coverage amounts, age caps, trip caps, and a host of other factors. The situation gets even more complicated when you consider that cards from the same bank can have totally different policies (e.g Citi Prestige and Citi PremierMiles have their policies provided by AIG and AXA respectively).

That said, in this post we’ll try and look at as many miles and points cards as we can and make some general comments about who offers more substantial coverage. At the end of the day, however, there’s no substitute for a careful reading of the T&Cs to know what what you are and aren’t covered for. This is especially the case if you’re not intending to buy separate stand-alone travel insurance cover.

The first and most basic question is whether you qualify for complimentary insurance in the first place.

Most people think that so long as they charge their air tickets to their card, they’ll be covered. That’s generally true, but there are a few points to note.

Most of you won’t be affected by this, but if you’re above 65 you’ll want to pay closer attention to the fine print, as some policies exclude or offer less coverage for people above a certain age.

Not likely to be an issue unless you’re going on a very long trip (>30 days), but worth noting for those YOLO adventures.

If you’re intending to redeem your ticket with miles, be careful because some complimentary travel insurance policies do not get activated on award tickets, even if you pay for taxes/surcharges with your credit card.

This may not always be stated explicitly in the T&C, so you’ll want to contact the insurer when in doubt. For example, Allianz (underwriter for SCB Visa Infinite/X Card) told me that “100% of the travel conveyance fare” must be charged to the card, so trips booked on award tickets (where the base fare is covered by miles) do not qualify. 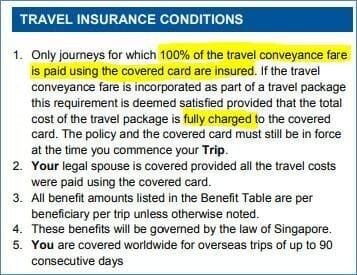 That said, just because you see such language may not mean that award tickets do not qualify for coverage. For example, UOB’s policy says that the “entire fare for travel” must be charged to the card…

…but their customer service team told me that so long as you paid the taxes/surcharges on an award ticket with your UOB card, you’re good. 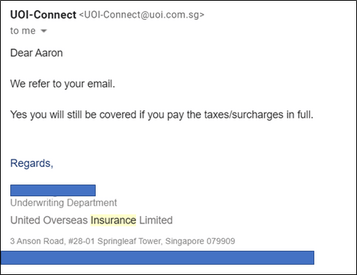 Citi has an odd additional caveat that the miles used must have been earned on a rewards program associated with the Citi card. I take that to mean any of its 11 frequent flyer programs, but it’s strange to think that LifeMiles and Alaska MileagePlan award tickets won’t be covered.

One-way revenue tickets are usually disproportionately expensive, so most people wouldn’t be buying them anyway. However, many of us may redeem two one-way tickets because of award space restrictions or other considerations.

You’ll want to be careful of the verbiage here, because some policies explicitly state that the round-trip fare must be charged to the card, while others make allowances for one-way journeys.

What types of coverage are provided?

There are four main types of coverage provided by complimentary travel insurance:

So suppose John goes to Koh Samui and the airline loses his bag. He also loses an arm, as one does while on holiday. He is airlifted to a hospital in Bangkok for treatment before coming home. Assuming his insurance covers everything, he will receive:

It’s important to distinguish between accident coverage and medical coverage. The former will almost certainly necessitate the latter (e.g losing a limb), but the latter may not involve the former (e.g food poisoning). All complimentary policies provide some sort of accident coverage, but not all cover medical expenses, so be sure to check carefully.

Evacuation coverage shouldn’t be overlooked either, especially if you’re traveling to a remote place where advanced medical care may not be readily available.

In the table below, I’ve summarized the coverage limits for each card:

Quite frankly, if I had to make a claim on my travel insurance, I’d much rather it be for travel inconvenience than medical/accidents. This covers things events that while annoying, won’t kill you: think lost luggage, missed connections and delayed flights.

Keep in mind that it may not be fair to compare absolute quantum of coverage, as certain policies may be qualitatively more generous than others.

Other things to consider

Here are some odds and ends you might want to think about when comparing policies:

Is complimentary travel insurance “good enough”? This really depends on what card you’re using. As you can see from the analysis above, the DBS Altitude/UOB cards provide bare bones coverage- no travel inconvenience, no medical expenses, just an accident policy. On the other hand policies like the HSBC Visa Infinite’s offer the kind of coverage you’d expect from a stand-alone policy- trip curtailment, loss of travel documents, rental car excess and even personal liability.

Ultimately, you’ll need to read through the T&C of the complimentary travel insurance and decide if you’re comfortable with the level of coverage provided. If you’re not, it’s very easy to get additional travel insurance coverage for less than S$8 a day.

There are many things to save on when you travel, but insurance isn’t one of them. Given how cheap it is, there’s really no reason not to cover yourself adequately.

If you want to rely on complimentary travel insurance from your card, be sure to check that (1) you qualify for coverage in the first place and (2) you’re comfortable with the quantum and scope of its coverage. When in doubt, contact customer service and get their responses in writing.

Be sure to check out the Weekly Deals Summary for all the latest promotions on travel insurance.

Thank you Aaron for summarising and shedding light on this topic

Hi Aaron, Thanks for another good insight piece.. and I do concur.. even if you didn’t exactly spell it out.. There are just too many Ts & Cs, pitfalls and land mines to navigate when/if one were going to ‘really rely’ on free travel insurance policiesthat credit card companies give as being a benefit.. and anyone who truly cares about protecting him or herself, as well as (or even more so) his or her loved ones, should simply dig a little deeper and cough up for a ‘real’ annual plan travel insurance policy.. The one interesting thing that you’ve found… Read more »

Not to forget other benefits like CDW for car rentals under the MasterCard WE travel insurance policy for the case of Citi Prestige.

From experience I know that CDW payment from Prestige (AIG) is very smooth and no hassle. That helps if you are being scammed by Sixt for damages you did not cause 🙂

Per the HSBC website (vide Insurance FAQ) and from my cardholder’s agreement: “With effect from 1 October 2018, you will be eligible for the complimentary travel insurance if a trip is purchased partially by HSBC Visa Infinite and air miles. In addition, in the event of claims such as trip cancellation/curtailment, air miles will not be reimbursed if the traveller has to forfeit the air miles due to insured events.”

Great to hear! Thanks for letting me know.

Great Summary on coverages! I did my own research few months back and narrowed down to Citi having the best coverages (i.e. from the few cards that I own) – but always safer I feel to have stand-alone Annual Travel Insurance Covers. (Great deals out there nowadays!) I enjoyed reading!

Agree with Beem 100%.. If it is ‘protection’ that one is looking for, best research “what’s best for you” in standalone annual plans and have much better ease of mind because, at the end of the day, one has to realise that any free plan, would be ‘tagged’ towards using the card in question, and if not, there’s no reason for the card company to simply give out free candy for nothing..

[…] wrote a recent post reviewing complimentary travel insurance offered by credit cards. My conclusion was that most of these policies did not provide sufficient coverage to be your […]

I recently spoke to AXA in relation to the cover offered in relation to the Citi Premier Miles card Interestingly while the Accident and Medical cover extends to family members, the Travel Inconvenience cover is limited only to the card holder.

Hi Aaron, what it means by “miles earned need to be associated with citi program” ? My miles/points are coming from different banks to covert to KF miles. Will this affect the insurance validity if I were to purchase award ticket, by using citi card to pay tax portion?

That should be fine in my view, but when in doubt always better to check with them

Thanks Aaron for your prompt reply!!

Thanks for the write up.
One question, just wondering can you double claim the insurance? Like claim from another travel insurance and also claiming this complimentary one…

Missed that paragraph! Thanks!

Hi Aaron, I realised another limitation of eligibility – where does the trip commence. I understand HSBC VI T&C clearly mentions to enjoy the insurance the travel must be commenced from Singapore. Therefore a return trip like BKK-NRT will not be eligible even if fare charged to the card.

Did I read the T&C correct? Is the same limitation for other cads as well? Thank you.

good spot! you should be on the lookout for that too, especially if you’re planning to do alaska mileageplan trick eg kul-nrt-sin. make sure you book your sin-kul leg on the same card that you book the rest of your trip

Thank you Aaron. Now, I realised that I was given the wrong information by CSO (believe it was HSBC VI) that award tickets cannot qualify for travel insurance as the full amount is not charged to the card.

this was a recent-ish change. when i first wrote the article in aug 2018, hsbc VI did not cover award tickets. sometime inbetween they changed their T&C to include

Just to clarify – The travel insurance covers only the card holder. In other words, if I was to redeem xx number of award tickets for family members, they would not qualify for the travel insurance when the remainder payment is made with my credit card. Hence, better to get standalone plan in this case.

I believe HSBC VI covers family (children, parents, siblings) in the TnC as long as travelling together with the cardholder (also charged their tickets to the card). Other way is to add them as supp.

Hi, JUst a quick question on the amex platinum Charge travel insurance
If i look at section 7, shouldnt the cover under baggage loss be $1500 per item, with a cap of $12,500?
How come above, you mention the cover is only $400?