No DBS, you shouldn’t be buying miles from mileage brokers

As far as corporate-driven education goes, this is pretty passable. There’s some genuinely useful information here on how to keep a budget, and how to get your feet wet in investing.

However, a reader sent me a link to a recent Money Bootcamp article which nearly caused me to choke on my aforementioned avocado toast. Unfortunate phallic cover photo aside, “How to get a first-class seat on your next flight” starts out reasonably enough, making the trite but true point that paying cash for First Class tickets is simply unaffordable (well, not always!), and therefore the everyman will need some “cheats” to make that First Class dream a reality.

Get bonus miles from your day to day spending

The idea here is to accumulate bonus miles, on things that you were going to buy anyway.

For example, certain ride-share apps in Singapore allow you to convert reward points to air miles – so if you’re dead set on getting a first-class ticket, you may want to channel all your rewards into bonus miles.

The article recommends that you look to earn bonus miles from your day to day spending, which I completely agree with. However, instead of talking about turning general spend into specialized spend, it instead gives the example of earning miles through GrabRewards. Well, OK- it’s not the direction I’d have gone in, but I guess it’s making the point of not leaving miles on the table.

This can result in weird behaviour. For example:

Had dinner with friends? Charge the whole amount to your air miles card, then get all your friends to PayLah! you back.

It then recommends you become “that guy” who always volunteers to pay the bill and get reimbursed in cash- hardly the most original of suggestions, but a sound one nonetheless. Indeed, miles chasers can be the most helpful people out there (just make sure we get paid!)

So far so good. But what if that’s still not enough?

You can buy miles…

If you’re still short of miles, the article highlights that it’s possible to buy them from Singapore Airlines.

Buy air miles, to top up the difference

If you’re just short of a first-class ticket (which you often will be), you can still save money by purchasing the remaining miles needed.

For example, you can buy KrisFlyer miles from SIA (subject to conditions*), at around $40 per 1,000 miles – that’s at the time of writing.

I don’t think that’s the best of ideas. I mean, you could buy KrisFlyer miles directly from Singapore Airlines, in the same way that you could get from Singapore to Tokyo by flying westwards across the Atlantic. The question is whether it’s the most efficient way of doing so, and the answer is no. Unless you absolutely, positively need the miles this minute (purchases from Singapore Airlines are credited instantly), there’s no reason to pay so much.

But fine, it’s a legitimate (albeit foolhardy) way of acquiring miles.

Now for the record, I’m sure this is not DBS’s official position. In all likelihood, this article was written by some content strategist who doesn’t actually play the miles game at all, and isn’t fully aware of what he/she is suggesting.

That said, it’s still pretty shocking to read the following on an official bank page:

You can also look for online mileage brokers**, who sell air miles at different costs. These offer some of the cheapest bonus miles; but you must be willing to follow them, and compare prices manually.

The costs won’t be insignificant, but they’ll still be cheaper overall.

Different airlines will have various requirements; check before buying.

**Please be careful; don’t get ripped off by a scam site. Carefully review and check all brokers before purchasing.

A mileage broker is exactly what it sounds like: someone who is in the business of buying and selling airline miles. A simple Google search will throw up hundreds of listings, offering pretty much every mileage currency you can think of: 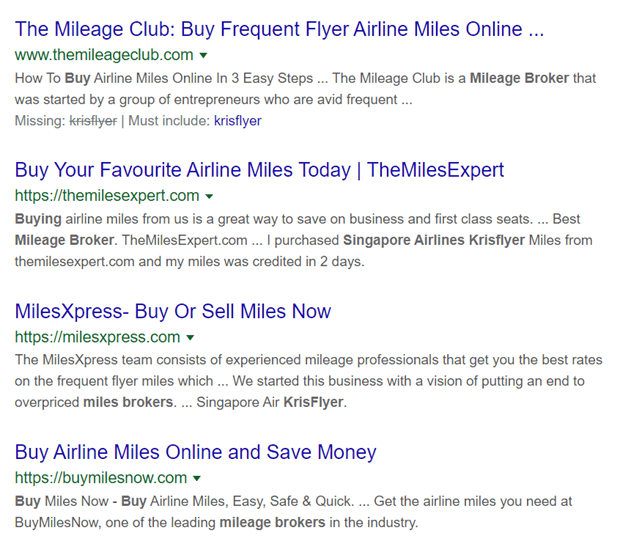 These brokers will sell you KrisFlyer miles, either directly (miles are credited into your account) or indirectly (award tickets are redeemed on your behalf using the redemption nominee feature).

Three years ago, I did an investigation into mileage brokers and their practices. It’s a lengthy article, but well worth a weekend read (as well as Singapore Airlines’ response, or lack thereof).

All things considered, there are some very good reasons why you should be steering clear of mileage brokers.

You may not get your miles

You shouldn’t use mileage brokers because there’s no guarantee you’ll receive the miles you paid for. All brokers operate on a “pay first, miles later” model. So what happens if the miles you bought never appear in your account? Good luck calling up Singapore Airlines and complaining.

Moreover, the world of mileage brokers is deep and murky, and I certainly wouldn’t be comfortable sharing my credit card information with any of them. DBS’s article cautions you to “be careful, don’t get ripped off by a scam site, carefully review and check all brokers before buying”. Well, I for one would like to know what kind of reviews they’re referring to. Surely not the page after page of articles warning you never to engage with these guys?

Or maybe they’re referring to the testimonials on the mileage brokers’ sites. You know, those absolutely real, completely not made up, honest opinions by unrelated third parties. Like this one, from a Chinese-looking gentleman named “Raj Nanjiani”…

…who also happens to be living a second life as Leo Black, manager at Vende Zone…

…and giving reviews on Tolip Nutrition in Vietnamese as Hao N… 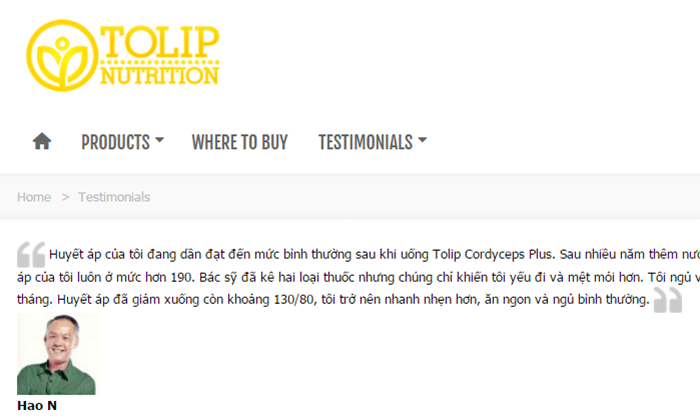 …and teaching as an adjunct faculty at Yavapai College, Arizona.

So yes, if you believe those, I have a couple of testimonials to share about my status as “Russia’s greatest love machine”.

Your miles may have been obtained illegally

Even if the miles do end up in your account, you have no idea where they really came from.

Does anyone remember the story last year about the lady whose KrisFlyer account got hacked? The hackers emptied out her balance for four Economy Class tickets from Frankfurt to St Petersburg (KrisFlyer later made her whole). 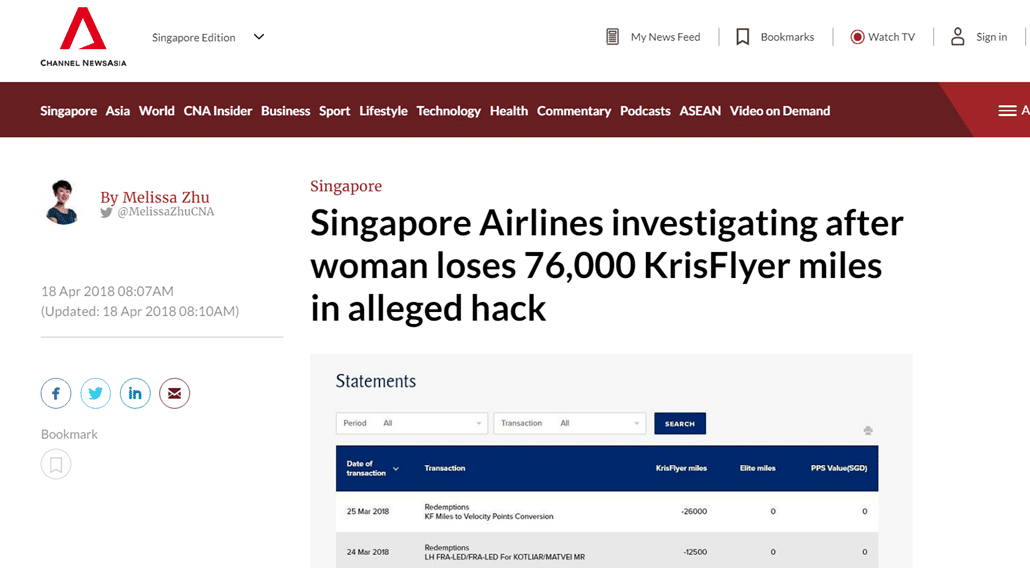 Now, I’m sure no one’s naive enough to believe that the hackers actually redeemed tickets in their own name. What probably happened was some unsuspecting tourists bought “deep discount” Economy Class tickets from a mileage broker, who used a compromised KrisFlyer account to redeem them.

That’s an example of redemption fraud, but even if the mileage broker deposits miles into your account rather than redeeming a ticket on your behalf, those miles could still have come from shady sources like a compromised bank rewards account.

Trust me, the last thing you want is to show up at the airport for check-in, only to be told your ticket has been cancelled and taken aside for questioning.

Your account may be shut down and all your miles confiscated

Even if your miles were obtained from a “legitimate” source (e.g the broker’s own personal rewards points), buying miles from a broker still runs afoul of KrisFlyer’s (or any frequent flyer program for that matter) terms and conditions.

Mileage brokers love to harp on the point that it is not illegal to buy miles, and they’re right. It’s not illegal*, in the sense that you won’t end up in Changi prison for doing so.

However, it’s against the T&Cs of every loyalty program, and if the airline finds out, it’s entitled to shut down your account and confiscate all your miles, purchased or not. Frequent flyer programs can and do monitor large miles transfers, so you’re really playing a dangerous game here by hoping to outsmart their audit department.

You will be paying above market rates

And finally, if none of those reasons were enough to dissuade you, you shouldn’t use mileage brokers because they’re way too expensive.

Brokers typically sell KrisFlyer miles for US$16-25 (S$22-34) per 1,000. This is cheaper than buying from Singapore Airlines, but still extremely pricey compared to other legitimate ways of generating miles:

Even if you don’t have rental, tax, or condo management fees to pay, or can’t generate enough miles through annual fees alone, you can use “no questions asked” schemes like the OCBC VOYAGE Payment Facility (min income: $120K) and UOB PRVI Pay (min income: $30K). These allow you to buy as many miles as you like for 1.9-2.1 cents each, without requiring supporting documentation. 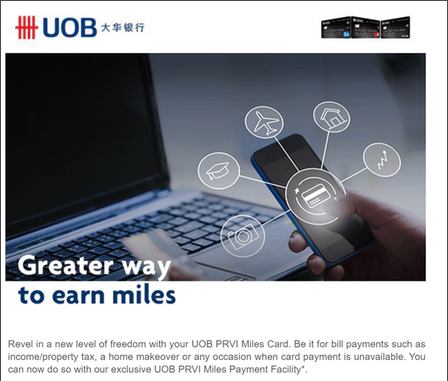 The only cap on the miles you can purchase is your credit limit, but there’s nothing stopping you from “topping up” your credit card limit by prepaying through ibanking.

Remember, you can always refer to this page to see if a particular source is a legitimate place to buy KrisFlyer miles.

Like I said, I’m sure this article does not reflect DBS’s official position (and I think the DBS Rewards department might have something to say to the team behind this), but it’s still going out as a bank-certified communication. The danger is that people who are less experienced in the miles and points game will read this and get into something they shouldn’t be doing.

So do your friends a favour and tell them to avoid mileage brokers (even if DBS recommends them 😉 ). The risk outweighs any potential upside, and given the abundance of cheap ways to generate miles in Singapore, is really unnecessary.

Good on ya for calling this out, Aaron.

That’s what I thought too. But if going by $1 Voyage = 1 KF mile, based on $50k payment and paying $975 processing fee, it seems like an expensive way to earn 50,000 KF miles which is only enough to redeem economy return to Tokyo and is higher than revenue fare.

Or is my PSLE maths failing me?….

Means if you can find something to spend 94k on the admin fee is SGD1833.

Which is a good deal.

It should be noted that the miles game is only worth it for business and above.

No miles for me
Reply to  brandon.t

Actually should be noted that **purchasing** miles is only worth it for business and above and only if you were going to fly J or F anyway. If you get the miles as a side effect of using a credit card for normal spend and there is no additional cost to you then the numbers are different, otherwise the costs don’t stack up especially when you compare to economy in LCCs.

yup, pretty much what brandon said. dont buy miles to redeem for economy- the math doesnt work out.

google cache still has it 🙂
https://webcache.googleusercontent.com/search?q=cache:lDYAwBwDbm0J:https://www.dbs.com/livemore/how-to-get-a-first-class-seat-on-your-next-flight.html+&cd=1&hl=en&ct=clnk&gl=sg

before the post is taken down, i already shared in telegram that it will be taken down. definitely not because of this blog post

DBS may be based in Singapore, but its soul is mostly Cantonese.