DBS customers will be paying more for FCY transactions from 1 November 2019, and will no longer be able to earn miles at hospitals or on utilities.

DBS has announced some upcoming changes to its credit cards, and unfortunately they’re bad news. From 1 November 2019, the foreign currency transaction fee on DBS Visa & DBS/POSB Mastercard credit cards will be increased from 3% to 3.25%, and hospital and utilities transactions will no longer earn points.

Let’s look at each of these changes in more detail.

Effective 1 November 2019, the administrative fee applicable for transactions made in foreign currencies on DBS Visa & DBS/POSB Mastercard Credit Cards (including corporate credit cards) will be revised from 2% to 2.25%.

The past 18 months have seen almost every bank in Singapore hike their foreign currency (FCY) transaction fee:

I hoped we’d seen the last of those changes for a while, but DBS is now carrying out their second hike in 11 months. There is no mention of any changes to DBS AMEX cards, so we can assume they’ll stay at 3% for now.

Here’s how FCY fees across banks now stack up:

The two most relevant DBS cards for miles chasers are the DBS Altitude Visa and the DBS Woman’s World Card. Here’s how those will be affected:

These are still reasonable prices to acquire miles at, although obviously not as good as before.

It’s noteworthy that the DBS Altitude now matches the UOB PRVI Miles for FCY fees (3.25% for both), but not in terms of miles earning (2 vs 2.4). The DBS Altitude may still prove better for smaller transactions, thanks to its rounding policy, but for big ticket FCY spend you may want to consider switching to the UOB PRVI Miles instead (assuming you don’t have the OCBC 90N Card, which earns an uncapped 4 mpd until 29 Feb 2020).

With effect from 1 November 2019, DBS Points, Daily$, SAFRA$ and HTNS$ will not be awarded for hospital and utility transactions unless otherwise specified.

As it stands, DBS points are not awarded for the following transactions:

Come 1 November 2019, payments to hospitals and utilities will also be excluded from earning points. 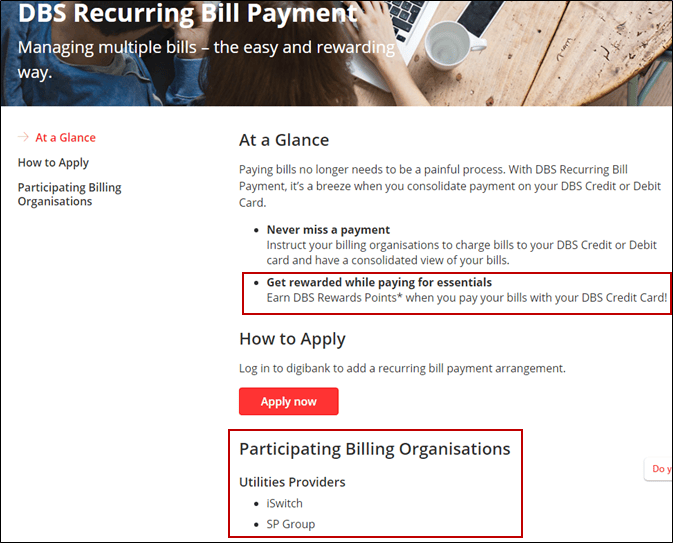 There is likely to be some confusion here, as DBS currently awards points when paying iSwitch and SP Group bills through the DBS Recurring Bill Payment feature. I suspect this is what the “unless otherwise specified” caveat refers to, but if you’re the paranoid sort it doesn’t hurt to drop them a message to confirm.

Otherwise, you can consider using the HSBC Revolution card to earn 2 mpd for online utilities payments. If you managed to register your AMEX KrisFlyer cobrand cards before 31 August 2019, you can also earn 3.2/3.1 mpd on SP Group bills via the AMEX KrisFlyer Ascend and AMEX KrisFlyer Credit Card until 30 November 2019, capped at $300.

The AMEX KrisFlyer cobrand cards and AMEX Platinum cards continue to be safe bets for hospital spend, awarding their usual base earn rates on such transactions.

Two fee hikes within the same year isn’t good for DBS customers, although the DBS Altitude in any case isn’t the best card to use for FCY spending. Whether you’re spending online or in person, you should be trying to divert as much FCY spend as possible to your OCBC 90N card to enjoy the uncapped 4 mpd earn rate which lasts until 29 Feb 2020.

Aaron Wong
Aaron founded The Milelion to help people travel better for less and impress chiobu. He was 50% successful.
Previous articleRoundup: Latest Credit Card Sign Up Bonuses
Next articleCiti removes online applications for the Citi Rewards Mastercard, but it’s not dead yet

Flash Sale: Get a Dyson Airwrap (worth S$799) with a new Citibank credit card

which is a good credit card for utilities?

which is a good credit card for utilities?

Hey Aaron, thanks for the blog post! So aside of the AMEX cards, what would you recommend for hospital bills?

It is a disappointment from DBS. What are the other cards that can earn miles for hospital bills as this can be a big ticket item although one hopes never to use it?

would UOB KF eligible for utilities?

Anyone knows if payment to utilities using wwmc will earn the 10x points before 1st Nov?

Ah, now it is clear, thanks Aaron.

DBS’s rewards points system does not have negative balance. If you are short of some points to redeem frequent flyer miles, just make refundable hotel bookings from expedia, agoda and cancel when the points are redeemed and balance is 0. You will not see negative balance when the refunded transactions are posted.