SCB will supposedly pull the plug on the SCB Visa Infinite from February...could this be good news for the X Card?

According to multiple sources, Standard Chartered will stop accepting new applications for the SCB Visa Infinite from 1 February 2020.

I’d been hearing rumours about this for a while, and my suspicions deepened in January when SingSaver, MoneySmart and GoBear all removed the SCB Visa Infinite from their offerings page.

I decided to try my luck by asking SCB customer service about SCB Visa Infinite applications, and was told the following:

I also reached out to my SCB RM and was told the same, so I’m 99% certain this is happening.

Both my RM and customer service mentioned that only the regular (brown) Visa Infinite will be discontinued; the Priority Banking (blue) version will continue.

As a reminder, here’s the main differences between the two cards:

Should I apply for an SCB Visa Infinite now?

Truth be told, the SCB Visa Infinite doesn’t have a lot going for it. Yes, the earn rates aren’t bad, if you know you’ll definitely spend more than S$2,000 per statement month, but the rest of the benefits are rather forgettable.

Cardholders only receive six complimentary lounge visits per membership year, and a free 4-hour yacht hire if they spend S$75,000 in a calendar year. Otherwise, there are no airport limo transfers, free hotel nights, dining memberships, or any of the other bells and whistles you’d expect from a card in its segment.

That said, the SCB Visa Infinite does have one very good use case: buying miles.

In exchange for paying the first year’s S$588.50 annual fee, cardholders receive 35,000 miles. That’s 1.68 cents per mile, a good price in and of itself. This only works in the first year, however, as cardholders do not automatically receive any miles upon renewal from the second year onwards. Upon appeal, they usually get 20,000 miles, but that works out to an unappealing 2.9 cents per mile.

The other thing the SCB Visa Infinite has going for it is the ability to buy miles through its tax payment facility. Cardholders can pay taxes for a 1.6% fee, earning 1.4 miles per S$1 charged (assuming your total spend in that month is at least S$2K- fortunately, amounts charged to the tax payment facility count). This works out to 1.14 cents per mile, one of the cheapest ways of buying miles in Singapore.

So if you want a card that lets you buy miles on the cheap, by all means get the card before 1 February 2020 and hold it for a year. Otherwise, however, you’ll find that other premium credit cards offer much more compelling features.

What does this mean for the SCB X Card?

I find the potential demise of the SCB Visa Infinite to be a highly intriguing development, not because I feel particularly strongly about it, but because of what it could mean for the SCB X Card. 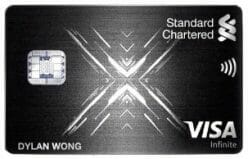 Now, we know the SCB X Card’s benefits aren’t anything to get excited about. Cardholders pay a S$695.50 annual fee, for which they get 30,000 miles, two lounge visits, and….that’s it. There isn’t even a sign up bonus anymore- that ended on 31 December 2019.

But hear me out here. Could it be that the bank felt constrained by the presence of the SCB Visa Infinite card?

Think about it: the SCB Visa Infinite had been on the market for more than 3 years at the time the SCB X Card launched. It would stand to reason that there’d be a good number of SCB Visa Infinite cardholders already, who’d be pretty ticked off if the “inferior” (in terms of income requirement) X Card offered better benefits.

If that’s true, then the SCB X Card couldn’t offer more than 1.4/3.0 mpd on local/overseas spend; and it couldn’t have more than six free lounge visits. It basically couldn’t have anything the SCB Visa Infinite didn’t have, and given how mediocre those benefits already were, it’s not surprising how underwhelming the eventual offering was.

The discontinuation of the SCB Visa Infinite would make the SCB X Card the bank’s top-tier offering. We already knew that despite the SCB Visa Infinite’s official S$150,000 income requirement, SCB was more than happy to offer it to those earning at least S$80,000, the same income as the SCB X Card. This suggests they see the target group as one and the same (so much for all that millennial branding, eh?), and my sense is we’ll see some higher-end perks popping up for the SCB X Card in the near future.

SCB must surely know that many X Card members won’t stick around for a second year if the benefits don’t improve substantially. Could the termination of the SCB Visa Infinite pave the way for that? I’d certainly hope so.

Heard from my RM that SCB is pulling the plug on the tax payment facility.

So what does this mean for existing card holders? They will just us tell us to stop using the card?

Your card will be valid until expiry

I see! Thanks Aaron

Not even possible for existing cardholders to renew?

Sad. I’m a big user of the card since I generally spend more than 2k/month and fair chunk of that is in foreign currency. Without the renewal bonus + tax facility, its highly unlikely I’ll continue to use it. For my spend profile it was the closest I could get to one general card because I amortised the goodness from renewal miles and tax payment miles. Now I’ll have to look at specialising further (also use DBS WWMC for 2k/online).

Any reccos for a high spender?

I renewed my HSBC VI on April 2019, called and was initially offered 20k points (8k miles). After some haggling (my spending history and international Premier relationship may have helped) I was given a final offer of 30k points (12k miles).

Oh cool, thanks Chris for sharing, at least I have a benchmark now. Yeah, I wouldn’t say it’s worthy it without the premier discount on annual fee. I guess I will need to figure out if I wish to keep this card before June.
I am holding X card too, wish to see if SC will enhance the benefit for it.

i was actually under the impression that hsbc doesn’t give anything with the second year’s fee. looks like a classic YMMV situation!

Let me try my luck 🙂

Man this is a real bummer. I too rely on this card for almost everything as i always spend above 2k per month with tons of foreign usage. Got about 2.2 million krisflyer miles on it over the last 3 years with 1.5 million currently unused. Sucks that I need to start to forcibly use it all up.

as much as it pains me to say this, why not BOC elite miles card then? you’d be saving 0.25% on FCY fees (unless of course your company reimburses you)

Yes, thanks a lot for the suggestion – am looking to switch now. Part of the reasoning staying on this was for the tax facility which was a huge boon. The easy pay facility on the card was really excellent for freeing short term cash flow. And also the card accepted almost all transactions from cardup/ipaymy to insurance, hospital and legal fees. It had a no fuss approach to essentially all transactions, and I just hate cards with multiple exclusions as I forget and I can’t keep track of it.

Boc also gives points on insurance, hospital, Cardup etc. The question is whether you’re willing to put up with their customer service…I’m still using it for the smartsaver really

I’d rather have cut my arm off and eat it than have to deal with the incompetence of BOC for all known and unknown issues that might arise. We need a solid replacement for SC VI, if it’s the SC X card, so be it, as long as it offers same mpd accrual

Can’t agree more, hate BOC so much, I switch to UOB now… can’t bear with their service any more…but really looking forward on how X card will be evolving…

Why do you need to forcibly use it up? I have a bunch saved up as well, is there a reason to finish using?

Good question, I just assumed since the card is getting discontinued, the points would as well if I don’t use it up. I don’t really know, but I can’t see how mileage points can exist on a non-existent card in two years…. the expiry of my card is in 2022. And I do many regional trips so I do have to start planning to consume just over 1.5 million miles, which is a bit harder than expected if I want to get the most value out of it.

Yeah I understand. I have about 900k miles in points that I need to figure out what to do with. Likely J class to Europe in the summer – best bang for buck and something that will consume a bulk of them 🙂

Got black and white email reply from CSO. Existing cardholders can renew with only the usual 20000 miles. No change to benefits. Tax facility will still be available.

Hi Aaron, a slightly off topic question here – how stringent is SCB is enforcing the minimum 200K AUM for priority? If I have 200K with SCB upon application, but thereafter fall below the 200K line, would my priority membership (and the priority card) be revoked?

Complimentary yacht for $75k spend is only until Dec 2019.

Just wanna let you know that I recently applied for this card and got it (even with a less than $80k income). Able to apply through the SC ibanking website.

could that be because you applied for the sc priority banking VI (blue card)? or did you get the scb vi (brown card)

Just paid my tax got the points seems ok. Noticed owen applied and got the card 30 days ago. Maybe rumors of the demise are not true?