Got a call to rebook your Restaurant A380 @Changi ticket? You’re not alone

There's been some A380 musical chairs today, as a system glitch results in SIA overselling its rabidly popular restaurant experience.

It’s quite common for airlines to overbook flights…but what about flights that don’t leave the ground?

That’s what appears to have happened to Singapore Airlines’ Restaurant A380 @Changi, which sold out in minutes after launching in the wee hours of the morning yesterday.

Here’s what I’ve put together so far from reports in the Restaurant A380 chatgroup:

It seemed to me that there were two things which could have happened:

With regards to the former, I could understand an overbooking situation in Premium Economy, where the actual cabin capacity varies depending on the average size of the groups.

For example (assuming you need to leave one row of seats between different groups), if Singapore Airlines sells 24 tickets for its 48-strong Premium Economy cabin, it could accommodate everyone if the group sizes just happened to be like below: 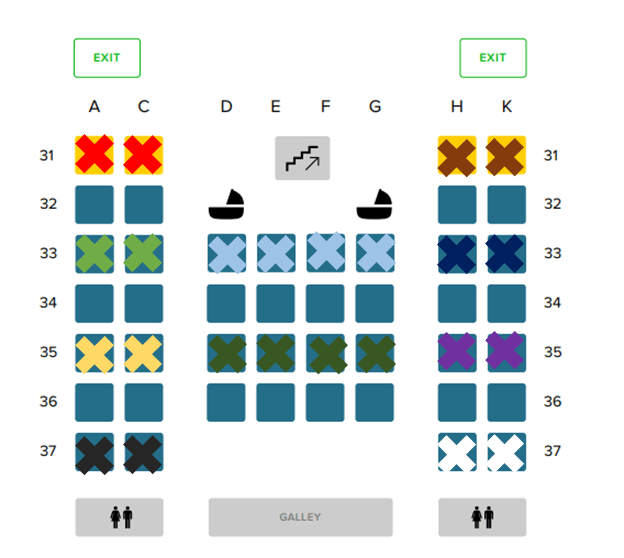 But if those 24 passengers were split into groups of other sizes, then actual capacity could be cut to, say, 15 passengers. 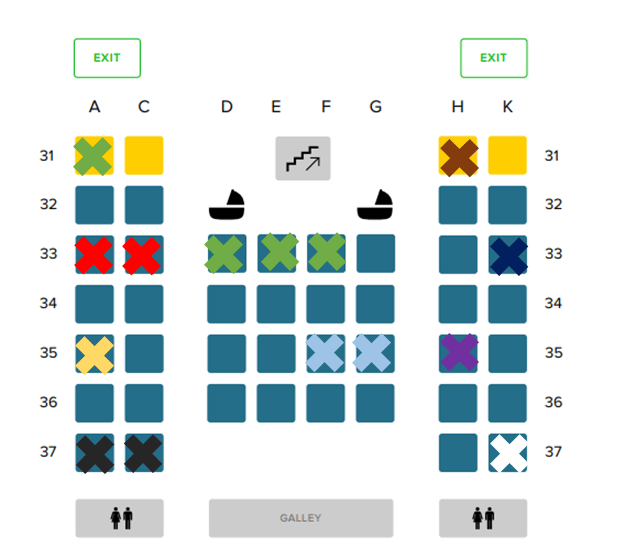 Basically, the need to leave gaps between groups means that it’s hard to anticipate exactly how many seats you can sell. I don’t think the KrisShop system is intelligent enough to handle those kinds of permutations on the fly.

But this doesn’t explain how Suites was oversold. While there may be some guesswork with Premium Economy, Suites is much more straightforward. The new A380 that’s being used has a total of six Suites, all of which I imagine can be filled while respecting safe distancing measures. So long as you don’t sell more than six, you’ll be fine.

This leads me to think it was a system glitch, which unfortunately wouldn’t be the first time SIA’s IT led to problems. I asked SIA about it, and got the following response:

Due to the overwhelming demand during the first few minutes after bookings opened for Restaurant A380 @Changi, a glitch in the booking system unfortunately resulted in Singapore Airlines accepting more reservations than seats for Suites and a small number of Premium Economy dining options. After we discovered this, we began contacting the affected customers and will re-accommodate them on other Restaurant A380 @Changi seatings. We appreciate the understanding of our customers, and we would like to thank everyone who has agreed to be re-accommodated for their flexibility. We would also like to apologise to all affected customers for the inconvenience caused.

SIA also clarified that all affected customers have already been contacted and re-accommodated as of this evening.

It must have been a tough day for the KrisShop CSOs, having to call up all those affected passengers. I imagine some may not have taken the news so well, but it’s really no fault of the CSOs that this happened. If you feel they handled your situation particularly well, consider sending a commendation email to [email protected] – it really helps with their performance evaluations.

Singapore Airlines has a bit of a happy problem on their hands with so many people eager to fill their coffers, but it’s a problem most would have seen coming a mile away. In any case, it’s good that they’ve added additional sessions, and let’s hope this doesn’t sour the experience too much for those affected.

Finally, if you missed out on the first round of Restaurant A380 @Changi tickets, do note that it’s possible to add yourself to the waitlist and get notified when the next batch of tickets go live.

Easy for you to make such comments Aaron as they are out there to please you and would not take you out as bloggers are good for their image and reputation to write all the wonderful things about them. That’s what they want to hear.

Hi I don’t think that a fair comment. I feel that Aaron is just reporting the facts and appealing to others to be more gracious. It does not hurt to be gracious – be kind to the people around you please. Thank you.

if you read some of the past posts on this site, i think you’d have a very different opinion…

write all the wonderful things about them? this guy?

Equally as easy for you to make such unfounded comments, apparently.

What a baffling comment this is. Aside from the points that others have already made, in literally his third paragraph Aaron states that these are experiences from others in the Telegram chat group. Are you saying that SQ is also “out there to please” everyone in the chat group? That’s just good customer service then.

I’m wondering if this happened in Europe will EU261 apply.

Can someone please urinate all over the toilet floor so I can get the full long haul experience while eating microwave food in a tight seat.

Maybe this explains why they opened the extra slots up