Traveloka's CNY sale is offering 20% off hotels, which means the Shangri-La Singapore's fabled Valley Wing at the lowest rate ever.

Over the past few months, we’ve seen rates at the Shangri-La Singapore’s Valley Wing go lower and lower. There have been Cyber Monday sales, 12.12 sales, New Year sales, and each time the price keeps coming down.

However, we’re now seeing what I’m certain is the best deal yet: a Valley Wing Deluxe Room for S$346 nett, from which you can knock a further S$100 off with SingapoRediscovers Vouchers (SRV).

It won’t last long though, so act quickly.

Both vouchers are valid from today 6 p.m to tomorrow 12 a.m.

The lowest rate I can find for a Valley Wing Deluxe Room is S$432.80 nett, available on many weekday nights throughout February, March and April 2021. 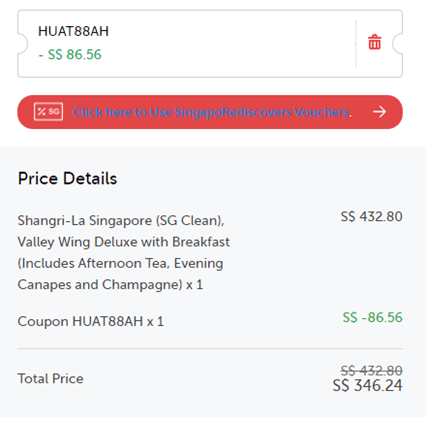 That’s not even taking into account your SRV, which will take a further S$100 off this already discounted price!

And because Klook’s been rather sneaky with their Valley Wing packages of late, I should emphasize that these bookings enjoy full Valley Wing entitlements, i.e:

What is the Valley Wing?

To properly appreciate the Valley Wing, you first need to understand the lay of the land at the Shangri-La Singapore. The hotel consists of three wings, each a separate building with its own personality and appeal.

The Tower Wing is the original building that opened with the hotel in 1971, but it’s also the most up-to-date, having completed a major renovation in 2017. It hosts the hotel’s Horizon Club lounge, as well as the five themed family suites (pick from: castle, outer space, safari, treetop and underwater). The wing is currently closed to bookings, as it’s used for SHN accommodation.

The Garden Wing was the next to be added in 1978, adding a distinctly tropical resort vibe with its open-air garden atrium (a first in Singapore), wooden decks and cascading waterfall. All rooms have balconies which overlook the abundant greenery or the swimming pool, and it was last renovated in 2012.

The Valley Wing was finished in 1985, and is practically a hotel within a hotel. It boasts a private driveway and entrance, a lounge that serves all-day champagne, and the most opulent breakfast in the house at the Summit Room. Guests receive special Valley Wing monogrammed bathrobes and amenities, and reserved seating by the pool.

I recently reviewed the Shangri-La Valley Wing, and while the rooms are tired and service didn’t hit the highs of the Raffles or Kempinski, it still offers a very good overall experience for those who enjoy old world luxury. Shangri-La in general is also a great choice for those with children, thanks to its Kid’s Club and waterpark.

One important thing has changed since I visited, however. Breakfast at The Summit Room is no longer free flow. Guests are now limited to two main courses each and three sides per order of eggs. Why they’d do that, I have no idea, especially since a Valley Wing breakfast is supposed to be one of the highlights of the stay. It just comes off as stingy, and not at all what you’d expect from a place like this.

But at least the champagne still flows freely, as do the wines and cocktails, so those of you with powerful thirsts may find this attractive.

You don’t have to spend the 20% off voucher at the Shangri-La of course, but this is flat out the lowest rate I’ve ever seen for the Valley Wing. It’s even more valuable now that Shangri-La has stopped upgrading Luxury Circle bookings from Garden Wing Pool View Rooms to Valley Wing Deluxe Rooms.

Reservations made using SRV cannot be changed or cancelled, so be sure to confirm your plans before pulling the trigger.

Thanks Aaron. Managed to grab for another night stay after reading your post.

The $432 option shows it’s for 1 guest only, does this mean its for single person stay?

Yup, and the lowest available would then be 420 all in if I’m not wrong.

the pricing algorithm is strange. some days it will show you higher charge for 2 pax, other days 2 pax and 1 pax price will be the same.

Hi Aaron, I just want to thank you so much for this article. Just stayed with my wife. First time in Valley Wing and it was so good, we decided we will return with our children. Actually, we got an even better deal than what you calculated. The Traveloka price was $458.80. We got $50 off with DBSCNY and another $91.76 off with HUAT88SIA. So we paid only $317.04 in the end. Awesome value!

glad you enjoyed it! that’s a good price to be sure. hope you drank more than a few bottles of the good stuff.