For 12.12, Klook is selling a Valley Wing package for just S$492 nett, which is also eligible for your S$100 SingapoRediscovers.

During Cyber Monday, Shangri-La Singapore ran a sale on Valley Wing rooms, with rates starting from S$428++ (S$504 nett). As good as this sale was, you couldn’t use your SingapoRediscovers vouchers (SRV) as it was offered through the Shangri-La website.

But Klook has now rolled out a 12.12 deal for the Valley Wing that’s even cheaper, and is SRV-eligible.

For one day only, Klook is selling a 1-night Valley Wing package from S$492.25 nett. This comes with the following inclusions:

This package is available for stays between 4 January to 16 June 2021. To give you an idea of rates, here’s how it prices out for January and February 2021: 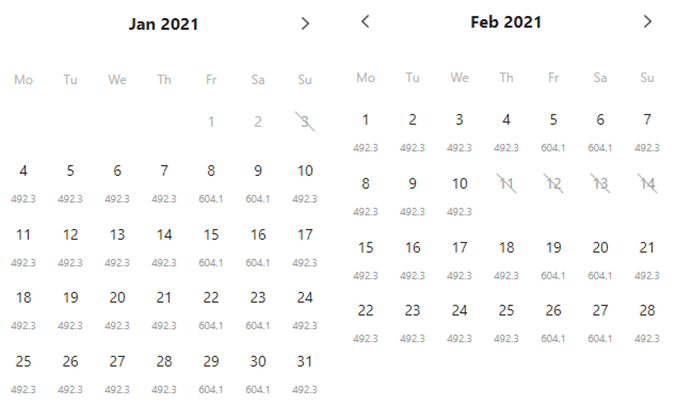 As the calendar above shows, this rate is generally available for stays on Sun-Thurs nights.

Where it gets slightly confusing is that Klook mentions a “Garden Wing Deluxe Room” in its description. It might be a typo, or you might actually stay in a Garden Wing room while still being eligible for Valley Wing perks.

Quite frankly, even if you don’t get a room in the Valley Wing it’s no big loss in my book. I found the room to be the most underwhelming aspect of my Valley Wing stay– it’s dated and badly in need of some TLC.

In contrast, the Garden Wing Deluxe Rooms were renovated in 2012, and while though slightly smaller (50 sqm vs 57 sqm), are a heck of a lot more modern.

The important thing is that regardless of room, you’ll be entitled to afternoon tea, evening canapes/cocktails and all-day champagne– arguably the reason why people spring for the Valley Wing in the first place.

What is the Valley Wing?

To properly appreciate the Valley Wing, you first need to understand the lay of the land at the Shangri-La Singapore. The hotel consists of three wings, each a separate building with its own personality and appeal.

The Tower Wing is the original building that opened with the hotel in 1971, but it’s also the most up-to-date, having completed a major renovation in 2017. It hosts the hotel’s Horizon Club lounge, as well as the five themed family suites (pick from: castle, outer space, safari, treetop and underwater). The wing is currently closed to bookings, as it’s used for SHN accommodation.

The Garden Wing was the next to be added in 1978, adding a distinctly tropical resort vibe with its open-air garden atrium (a first in Singapore), wooden decks and cascading waterfall. All rooms have balconies which overlook the abundant greenery or the swimming pool, and it was last renovated in 2012.

The Valley Wing was finished in 1985, and is practically a hotel within a hotel. It boasts a private driveway and entrance, a lounge that serves all-day champagne, and the most opulent breakfast in the house at the Summit Room. Guests receive special Valley Wing monogrammed bathrobes and amenities, and reserved seating by the pool.

I recently reviewed the Shangri-La Valley Wing, and while the rooms are tired and service didn’t hit the highs of the Raffles or Kempinski, it still offers a very good overall experience for those who enjoy old world luxury. Shangri-La in general is also a great choice for those with children, thanks to its Kid’s Club and waterpark.

One important thing has changed since I visited, however. Breakfast at the Summit Room is no longer free flow. Guests are now limited to two main courses each and three sides per order of eggs. Why they’d do that, I have no idea, especially since a Valley Wing breakfast is supposed to be one of the highlights of the stay. It just comes off as stingy, and not at all what you’d expect from a place like this.

But hey, the champagne still flows freely, as do the wines and cocktails, so those of you with powerful thirsts may still find this attractive.

Once you’ve deducted your S$100 SRV, you’re looking at a nett outlay of S$392. That’s a great deal if both of you love your booze.

There may also be further savings for you if you pay with the right credit card. HSBC, for example, is offering a 10% cash rebate (capped at S$25) for SRV transactions across all eligible platforms including Klook. I’ve written a detailed article about the various promotions; check it out here.