Rare instant ramen, an app that lets you mule things for people and a whole lot of miles and points. Sounds like a plan.

Ah, Tokyo. The only place in the world where people don’t think I’m a total weirdo. I love Tokyo, even though I couldn’t care less for temples, shrines, Mt Fiji, handicrafts or fashion (as the Milelioness will attest to). But I do care for food. And my goodness, Tokyo has a lot of it. My entire itinerary for Tokyo is gastronomic. Sashimi, crab, Kobe beef, yakitori, tempura, tonkatsu, Japanese fruits, Japanese pizza, and Japanese pancakes.

Yes, buying 132 cups of Michelin Starred Nakiryu noodles was never the idea behind the trip, but hey, I’ve got all this luggage space I won’t be using, and a whole lot of love for ramen. Now that some very helpful commenters have brought my attention to hotel-airport delivery services like TA-Q-Bin, I’m starting to wonder if 132 units is thinking too small. It’s probably a moot point anyway because all reports I’m hearing from Tokyo are telling me the noodles are gone. Finished. Nada. I reached out to the UOB concierge to ask them to help me source more units and got this response

Thank you for your email. We have just heard back from our team in Tokyo, and they have advised that unfortunately these noodles have been discontinued. Our team contacted Nissin directly, and they confirmed that the production was limited to May 2017. The noodles have largely been sold out, and the main convenience store support lines could not confirm stock availability at individual locations.

We apologize that we could not be more helpful. We did look at other options for purchase, and it appears that even the third party sellers/resellers have stopped taking orders for this product.

That can’t be good, but it’s not going to stop me from looking…

Another reason I’m extra excited about this trip is it’ll be a chance to test my investment in better media creation. That’s right, my Sony A5000 is here, and it will undoubtedly solve every photography issue I have because technology. 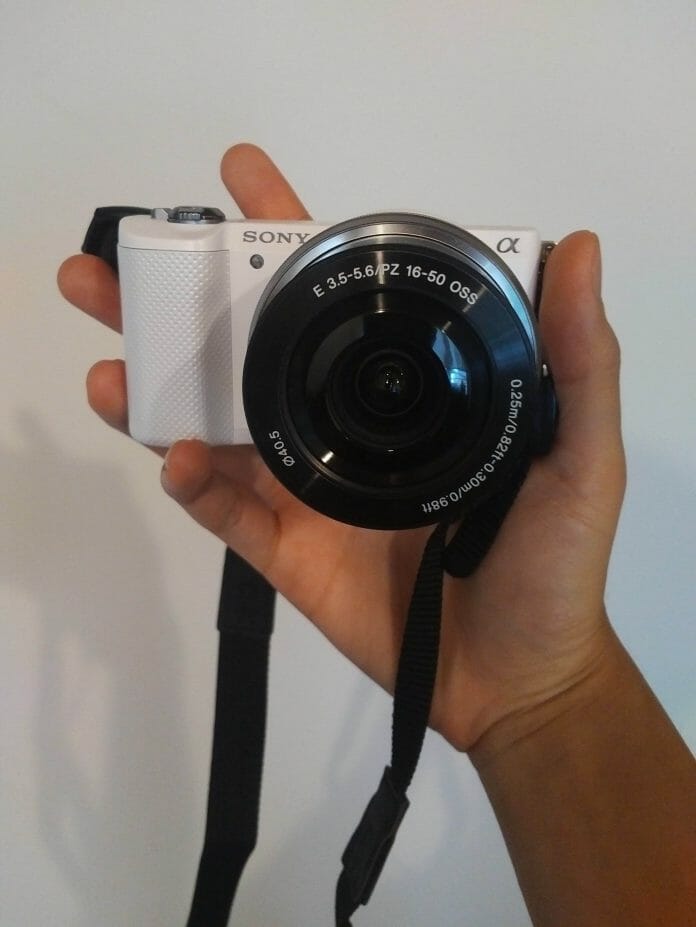 So here’s the gameplan:

To get to Tokyo, I’m using the remaining leg of my RTW ticket (remember I chose to start the trip in Tokyo because of the big cost savings involved) which will put me on JL36 to HND on JAL’s 777-200ER aircraft.

It’s always tricky to know what seats you’ll get in J with JAL, as they operate so many different kinds.

Fortunately, they’re one of the few airlines that publishes a schedule showing you which seats are operating which routes. A little bit of searching and I found that I’d have the Sky Suite III on my flight.

On first glance, the Sky Suite III looks like your standard reverse herringbone seat. But having tried JAL’s excellent Apex Suite, I’m keen to see how the rest of their J seats measure up (well, at least the non-angled flat ones).

To get back to Singapore, I decided to burn some of my Krisflyer Miles to redeem an SQ First Class seat on SQ637 (which leaves from NRT, unfortunately. The HND flight leaves at 9 in the morning, which is too early for me. At least the NRT flight leaves at 11.10am). I tagged on an additional leg to Sydney in F with a stopover in Singapore of a few months to save miles on my next trip. Most people would call this a bummer, but in this case I actually would prefer a bigger F cabin. I’m planning to shoot some video during the flight featuring an in-air taste test of the noodles, and the last thing I’d want to do is bother the other guy in the cabin (as per the seatmap it appears only one other seat is taken) with my antics. If I were in a one row First Class cabin it could be quite distracting, but at least with two rows I can occupy whichever one he/she isn’t in.

I’ll also need some help from the crew and that’s why flying J isn’t an option. I know the crew will be super busy in J and may not have time to help me out. I tend to find SQ’s crew in J professional but not particularly personable, whereas the crew I’ve interacted with in F have been universally warm and approachable. I’m sure a lot of it comes from the fact that the crew in F often look after just a couple of passengers, but that’s exactly the sort of attention I need this time round.

Tokyo is a tough city to find value accommodation…unless you’re willing to do AirBnB, in which case you can find fantastic deals (and $40 in travel credit if you’re a first time user). I got a studio apartment around Tokyo station for S$100 a night, all taxes and fees included. I paid for this using a combination of referral credit (thank you, everyone who used my link!) and the AirBnB gift cards I’d been stockpiling every time they go on sale for 20% off. 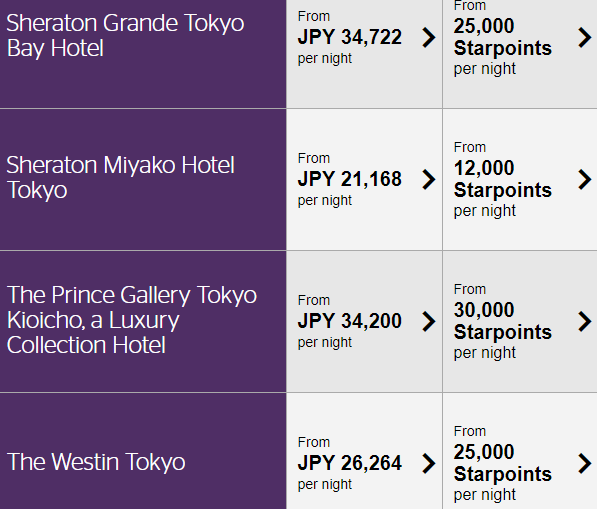 The Starwood options in Tokyo are a good way of draining your points balance though, with the cheapest property starting at 12,000 points (and also in a really inconvenient location). 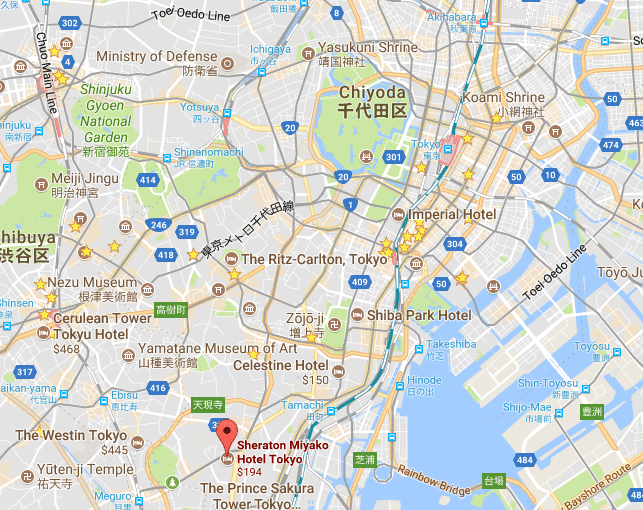 This is where I found the Starwood-Marriott tie up useful. Starwood lets you transfer your points to Marriott rewards at the ratio of 1:3. Marriott has a big footprint in Tokyo, as you’d expect. Here’s what they have and how much each property costs, in terms of MR points. 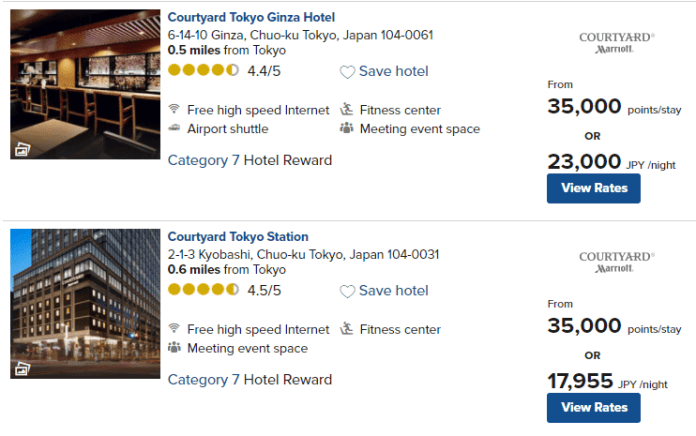 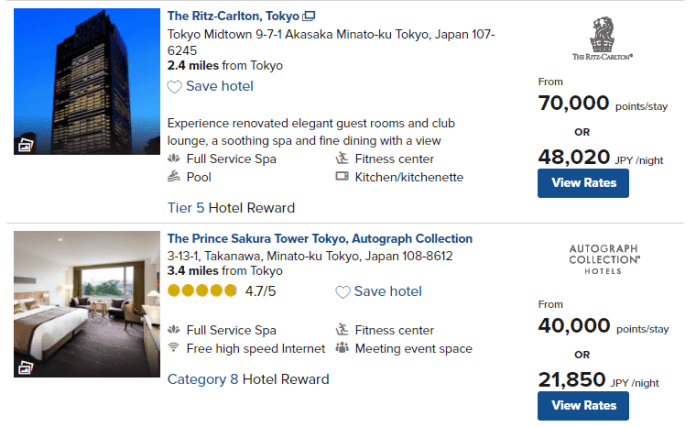 The Courtyard by Marriott Tokyo Station has solid reviews on the only review site that matters, and its concierge was able to get me reservations at the restaurants I wanted. Not bad for a 4 star hotel! My only gripe was that they were very strict about booking restaurant reservations only on dates that I was staying at their property, and not the dates I was at my AirBnB. I really didn’t understand this, given that either way I’d give them my credit card as security against no shows, but in the end the UOB concierge managed to help me out for the other dates.

With 132 cup noodles to carry home, transportation suddenly becomes a very important part of the equation. I’m bringing two large roller bags + 2 collapsible duffel bags. Somehow I think that won’t be enough, and I’ll end up having to bring some of the noodles in the boxes they came in.

Which brings me to the second problem- getting to Narita airport. I’m going to opt for the much cheaper Keisei Toyko Shuttle bus (JPY 1,000) over the overpriced Airport Limousine  (JPY2,800), but the issue is the sheer number of bags I’ll have. The Keisei website seems to suggest that strictly only one bag is allowed, and even if they’re flexible I don’t relish the idea of carrying 2 rollers, 2 duffels and an indeterminate amount of boxes to the bus stop from my AirBnB.

Fortunately, someone told me about TA-Q-Bin, a luggage forwarding service that can pick up your bags/parcels from an address and forward them to the airport where they’ll be waiting for you. I’m inclined to go with this, even though it’ll eat into my profits somewhat. If I pack my stuff properly, I should only need to pay about S$20-30 to ship everything.

So that’s the plan! The real question is whether or not I’ll be able to increase my 132 cup haul…but I’ve got a few tricks up my sleeve that I’m itching to try out.

Aaron Wong
Aaron founded The Milelion to help people travel better for less and impress chiobu. He was 50% successful.
Previous article
What Singapore-based flyers need to know about the SQ-Alaska Airlines partnership
Next article
SQ to unveil new A380 cabin products on 2 November

Good luck and have a pleasant trip!

@aaron
If you are looking for ideas, 5mins away from where you are staying, there’s a steak place called “Shima” that had the internet raving about their steak and the steak sandwich. Slightly tricky to get though, cause its almost up to the chef to decide if he wants give the sandwich to you. Going later and ordering his set usually helps 🙂

Hi Aaron. After trying them, can you let me know which are the ones you recommend ? Sorry to push you for a quick reference because my trip is coming up in a month and I need to make the bookings now. Thanks a lot

so here’s the restaurants I’d definitely recommend- ukai-tei (any of their outlets are good, I went to the one in Omotesando)
http://www.ukai.co.jp/english/omotesando/

beefsteak kawamura was good in terms of quality, but not on the same level of experience as ukai-tei (https://www.bifteck.co.jp/en/)

manten sushi has an excellent value set dinner, one of the best in the city ( https://www.tripadvisor.com.sg/Restaurant_Review-g1066443-d6058537-Reviews-Manten_Sushi_Marunochi-Chiyoda_Tokyo_Tokyo_Prefecture_Kanto.html)

all of the restaurants above except sushi tsubaki can be booked online very easily. tsubaki- need concierge to call.

Thanks so much Aaron. I will get my concierge to book Tsubaki at once.

From the link, I saw “Table money/charge 10％”. May I know what this charge refers to ? Thanks

Hang on – “Milelioness”? Is there something about which you’ve forgotten to tell us? Should chiobus no longer apply?

Dear pat. Thank you for writing to express your interest in the position of Milelioness. The milelioness is an extremely competitive position and each year we are forced to turn down many highly qualified candidates such as yourself. This speaks more to the selectivity of the position rather than you as an individual. Thank you for your interest. We consider it a mark of our progress that we are able to attract candidates such as yourself