Get access to over 1,000 Entertainer 1-for-1 deals for the princely sum of $5 (waived for HSBC Premier MasterCard and HSBC Visa Infinite main credit cardholders).

By this time you might have seen it mentioned in the Milelion Telegram group; or perhaps you’ve heard the ads on the radio. Yes, it’s true – for the low, low price of $5, you can get access to Entertainer 1-for-1 deals if you’re a HSBC cardholder. For those of you still holding on to the HSBC Advance card (RIP 2017), here’s the moment where you can pat yourself on the back for  holding on to the card for contingency purposes.

We all know that if a deal sounds too good to be true, it probably is. The version of the Entertainer offered by HSBC is a limited one; while I personally think it’s still a pretty great deal, that’s something you should be aware of when deciding whether to get it.

The full details of the HSBC Entertainer deal can be found on the official website, but I’ll give a quick breakdown here.

First up – what’s the Entertainer? 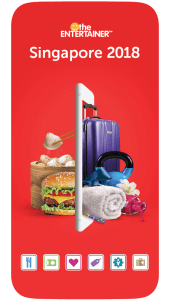 Aaron’s already previously taken a look at the Entertainer; not that much has changed so I won’t go into much detail here. In a nutshell, it’s a whole bunch of 1-for-1 coupons that could possibly save you lots of money on dining and/or hotels, depending on your preferences for these categories; however, the retail price is S$145 (currently on ‘CNY offer’ at $95) so some dedicated spending is required to break even, let alone benefit from having it.

With this in mind, the $5 cost price offered by the HSBC offer makes it a very much lower risk value proposition – you’ll probably (more than) break even after using just one coupon; anything else beyond that would constitute actual savings already.

Sign-up involves downloading the HSBC SG app (iOS | Android) and enrolling, charging the $5 enrolment fee to your HSBC credit card. This can be done relatively quickly – within a minute, you should be ready to go! Supplementary cardholders are also eligible.

How do I get it free?

For HSBC Premier MasterCard and HSBC Visa Infinite main credit cardholders, the waiver will be processed in the form of a refund credited to your account in the following month.

What are the differences from the full Entertainer? 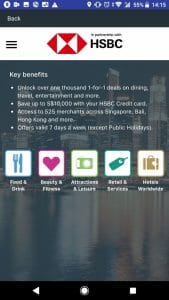 On second glance, however, you might notice that the HSBC version combines “Fashion & Retail” and “Everyday Services” into a single tab – “Retail & Services”. It’s a relatively minor change, and you can browse the list of offers available on the official website. I’m no expert in this area though, and consensus among friends seems to be that these offers are pretty skippable – no harm checking to see if anything catches your eye, though!

The list of exclusions is too long to go into here – an obvious item that’s missing is the humble Yoshinoya (I’ve come to realise that’s surprisingly popular among people I know). If you want to really analyse this, you could download the Entertainer app and preview locked offers even without purchasing it.

Two vouchers instead of three 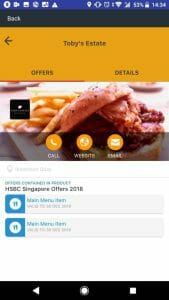 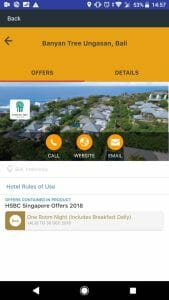 Hotel 1-for-1 deals are also accessible via the HSBC Entertainer. Unfortunately, there doesn’t seem to be an easy way to browse the hotel list online – the offers available to HSBC Entertainer are restricted as well. 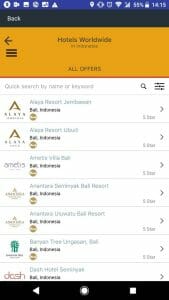 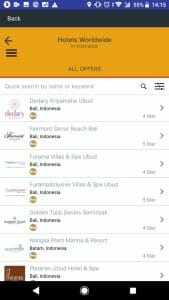 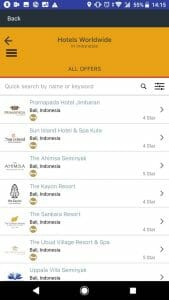 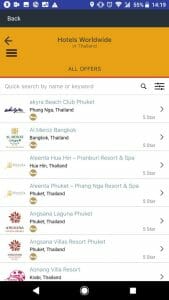 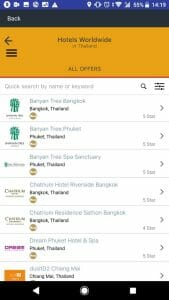 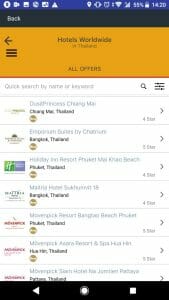 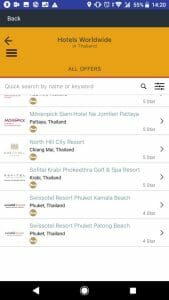 Some additional data (thanks Eddie!) – For China and Hong Kong, there’s no difference in access (though there’s only 1 property for each). For Maldives, all 8 properties available on the full Entertainer are absent from the HSBC Entertainer.

$5 is a really low cost for the potential benefits, even if access to Entertainer deals is restricted. If you hold a HSBC Premier MasterCard or HSBC Visa Infinite, it becomes a no-brainer since you’re essentially getting it free. It’s rather annoying that you can’t browse the hotel offers before buying in, but if you treat those as a bonus rather than what you’re paying $5 for, it’s still a pretty good deal, all things considered!

A tip – if you do get it and are new to the Entertainer, it’s worth getting reading up on its terms & conditions (especially the exclusion dates) – for instance, due to Valentine’s Day and CNY, we can’t actually make use of the deals for the rest of this week!

Also, technically the bill needs to be settled using a HSBC card if using the HSBC Entertainer. No idea if restaurants will enforce this; if so, using a HSBC Revolution Credit Card to earn 2mpd isn’t really the end of the world!

Louis Tan
Louis believes he caught the premium travel bug after attaining KrisFlyer Elite Gold and occasionally being upgraded while shuttling between the UK, Singapore and Japan (in economy class). These travels have led to a wonderful marriage, as well as a burning desire to avoid flying long-haul economy. He previously travelled with a gryphon plush toy, Griffles, which often stood in for him in vacation photos. Griffles is mostly busy with entertaining a toddler these days, but still manages to continues amusing (and confusing) air stewardesses, hotel staff (and just about everybody else) all around the world.
Previous articleClarifying some confusion about the two Lifemiles targeted offers
Next articleKrisFlyer Spontaneous Escapes for March 2018 available for booking

And be forced to use a (gasp) cash back card??

On a more serious note, do we still get our hotel elite nights, stays and points if we book through Entertainer?

Quick solution – get the HSBC Revolution for 2mpd on dining spend! =P

I think the elite nights etc. might depend on property. FWIW, when I previously stayed at a Hilton property, the first night was counted as a full revenue stay and the second one earned nothing (not sure if it counted as an elite night – I suspect not). Think that might be the most common implementation of 1-for-1 hotel stays?

That’s a fair deal. Was your elite status and benefits recognised on the second day though?

As far as I know, only in the app for HSBC Entertainer.

Hi! This would really depend on personal preference and inclination. It essentially translates to 50% off best available rate for a 2n-stay – if you can find a property you’d like to stay at, that’s certainly ‘worth it’ for $5. Extra benefit is that the room booking is usually cancellable, unlike most 50% sales rates. As mentioned in the article, you can’t view the HSBC Entertainer hotel list online. You can only browse after paying (or if you know someone who has it). For the full Entertainer, you can browse by downloading the app and checking the locked offers –… Read more »

Anyone tried paying with other bank cards for the meals? I scanned thru the t&c but didnt manage to find the clause which state payments must be made using HSBC cards.

ok nvm. it is stated in HSBC’s website.
“Simply show the ENTERTAINER with HSBC deal when placing your order, and pay with your HSBC Credit Card.”