What’s the most optimal way of cashing out SCB rewards points?

Spend more on the X Card, or simply buy more points? Here's how to minimize fees and orphan points when cashing out your sign up bonus.

If you’ve successfully unlocked the 100,000 miles sign up bonus on your SCB X Card, then congratulations! The nerve-wracking wait is over, and now you can start planning that awesome trip (and if you think you should have,  but didn’t get anything, there’s no reason to panic until 2359 on November 30, 2019. Then yes, panic).

But before you do, however, there’s just the little matter of transferring your SCB rewards points to KrisFlyer (or any of the other 11 transfer partners). And that’s where you may run into a problem.

Let’s assume you spent S$6,000 on the dot, in local currency. You’ll have a total of 268,000 rewards points (even if you spent a bit more than this, or some in foreign currency, you’ll be roughly around this neighborhood).

You go to SCB’s rewards catalogue, and see that there are five different KrisFlyer redemption options: 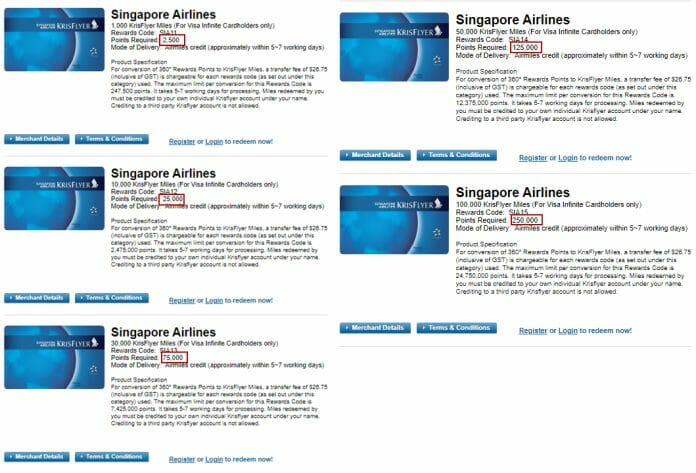 You learn that a maximum of 99 of each rewards code can be redeemed in a single transaction, and each unique rewards code attracts a transfer fee of S$26.75. For example:

In other words- how do you minimize points left behind, and total fees?

One interesting possibility a reader (thanks Richard) pointed out to me was buying additional rewards points from SCB.

This option appears when you try to redeem something that costs more than your current points balance. In the example below, I’ve tried to redeem 11 x SIA12, with a total cost of 275,000 points. 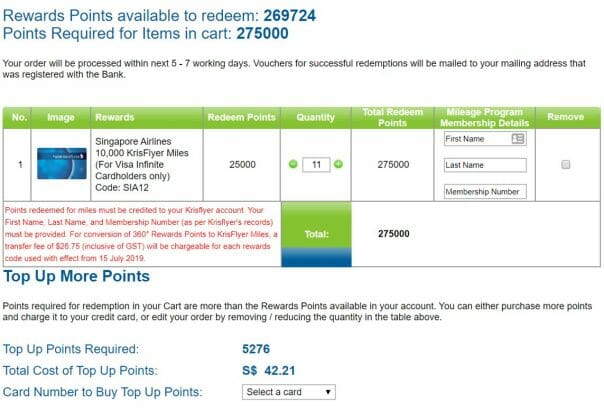 The alternative to buying points from SCB is to spend a further S$2,334 on local transactions, which would earn you an additional 7,002 points.

But the problem here is opportunity cost. We already know the SCB X Card’s earn rates of 1.2 mpd (local) and 2.0 mpd (FCY) are nothing to get excited about. Spending beyond the S$6,000 threshold, therefore, means giving up the chance to use other higher earning cards.

Your opportunity cost depends on what you’re spending on, and what other cards you have. In the working below, I’m assuming you own a BOC Elite Miles World Mastercard (1.5 mpd on general spending) and various specialized spending cards like the Citi Rewards Visa, DBS Woman’s World Card, or the UOB Preferred Platinum Visa (4 mpd on selected categories).

Now, it’s technically incorrect to compare the opportunity cost and the cost of buying points, because one is implicit and the other is explicit. That said, it’s clearly not worth putting additional spend on the SCB X Card if it means forgoing a 4 mpd card.

I suppose that if your next best alternative is a general spending card, then you’re not losing too much by using the SCB X Card. But that’s a generous assumption, given how widely available 4 mpd opportunities are– as long as the merchant takes Paywave or GrabPay, it’s already a chance to earn 4 mpd.

I’m personally inclined to just pay the top-up and withdraw my points, because it’s a relatively small price in the grand scheme of things.

It’d be a lot better if SCB’s rewards system didn’t have the silly SOP of charging multiple fees for different rewards blocks, but that’s how we play the hand we’ve been dealt.

Aaron Wong
Aaron founded The Milelion to help people travel better for less and impress chiobu. He was 50% successful.
Previous article
Hilton 72-hour flash sale: up to 50% off hotels in Japan, Guam, Korea, and Hong Kong
Next article
LifeMiles Black Friday sale: 150% bonus on miles, up to 43% off Star Alliance awards

In a sense, I really like OCBC’s STACK. Now I have almost no worry about orphan points in OCBC rewards system. I even dream of a system which can exchange any loyalty points. How likely is it in Singapore?

Thank you for your article it was timely as I was looking at SC’s points system. They have 2 sets of Krisflyer redemption – one for Visa Infinite and one for all credit cards.
I was told that I cannot combine all my points from Visa Infinite, XCard, Priorty, Prudential (total is 362,376). However, when I chose SIA25 (350,000 points), it does allow me to add to my cart. I didn’t proceed so not completely sure if I ultimately can do it though.

As long as you have a VI card, you can redeem all points from all cards on the VI rate. Done it last year when cancelling my SCB VI, got around 480k points on it and about 20k on sc rewards visa. Was able to convert 200,000 miles

If you have multiple visa infinite cards (at least 2) – priority banking visa infinite, visa infinite and x card and if you have another person with one of the same card (not supplementary card), you can do a point transfer to the person and the person can also transfer it back. It is immediate and you do not need to clock more spending on the x card. The transfer of the points is immediate. In this way, you can consolidate the points in one card without further spendings

Is there a limit on how many points can be bought? Can I spend a few bucks on the card and then buy the remaining hundred thousand points at .8 cents per reward point for a 50,000 mile redemption? Or is it capped based on your current balance?

Think there’s something that may potentially throw all your well intentioned calculations out of the window. SCB currently has a Christmas promo where if you’re the first 1000 to spend $20K then you get $500 cashback (effectively 2.5%) on top of the miles you’d earn.

So shouldn’t cardholders be using their XCard to charge $20K using CardUp / Ipaymy / Renthero etc?. Yes you’d incur roughly $500 fee, but this will be reimbursed by SCB via the cashback – effectively “generating” another 24K miles for “free” on an expense that you otherwise won’t earn miles for?

well, first of all it’s a UOB style “first X to spend Y” type promo, so you won’t know for sure if you got it. that to me is the biggest wild card in all this. you also need to have a bill to pay, and not everyone will have rent/tax etc.

What’s the most optimal way of cashing out SCB rewards points?
I just updated from SCB guy, If I select multiple codes, I have to charged multiple times.

He pointed out as per below:

10. Mileage Transfer Programme
10.4 For conversion of 360° Rewards Points to KrisFlyer Miles using rewards code(s) (as set out in the table below), a transfer fee of S$26.75 (inclusive of GST) is chargeable for each rewards code used with effect from 15 July 2019
Even I have selected the same code for multiple times, I have charged multiple times.
Can anybody confirm on this issue?

I did the redemption with top-up method a few days ago and my points balance was reduced to 0. Now my card has been charged the top-up cost but my points (including the top-up points) have been refunded back to my account.

I’m confused. Does this mean that I have to do the redemption again?

Psst! SCB Cards (at least the ones I’m using) seem to be awarding points/miles/cashback for topping up a certain revolutionary wallet/card. That’s how I got to the $8334 spend on my X-card a couple of months ago.

Really? Topup was accepted as qualifying spend for the sign up bonus? Wow I thought I was sailing close to the wind buying Visa and Mastercard gift cards (which worked). After I got the sign up bonus I used topup to round up my 360 points and then transferred them all to KF asap to avoid claw back.

I didn’t do the full amount, but when I just couldn’t come up with anything to spend on that wasn’t a big loss in terms of opportunity cost (as accurately calculated and described by Aaron), I topped up my revolutionary account. Legitimate spending did exceed $6000, so we’re really talking topping up to make up part of the difference to $8334 here. I’ve converted my points to KF, just to be safe.