I think we’re all fairly accustomed by now to UOB’s style of sign up bonus:

It’s frustrating, but not surprising by now. And sometimes it even gets so absurd that you just have to laugh.

Case in point: until 31 December 2019, UOB actually had a pretty decent bonus on the KrisFlyer UOB and UOB PRVI Miles AMEX cards. New-to-bank customers who spent S$6,000 on either card in the first 90 days received 10,000 bonus miles. There was no cap; it was that simple.

Well, it seems like UOB’s knocked some sense into whoever was responsible for that gaffe, because the latest promotion is much more familiar territory.

From 1-31 January 2020, both new-to-bank and existing customers who get approved for the KrisFlyer UOB credit card will receive 3,000 miles after their first transaction of at least S$5. That’s the same as before. 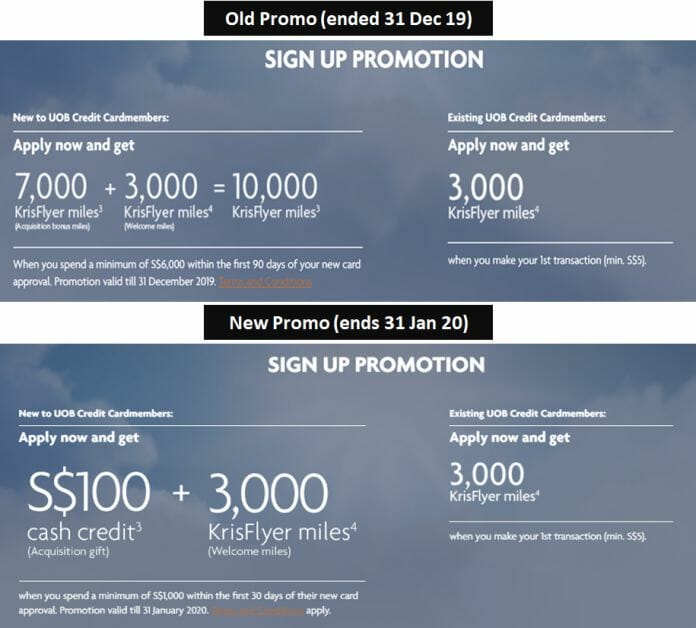 This is the same gift being offered on the UOB PRVI Miles cards (existing customers get nothing here).

Oh, but we haven’t even gotten to the good part yet…

About that S$100 cash credit

That’s right- “a principal UOB credit card”. This 200 cap is shared among the following cards:

Let me say that again: you have to be among the first 200 people within this group to fulfill the criteria, which means that miles chasers are competing with cashback chasers and Metro chasers and Singtel chasers and whoever applies for UnionPay and JCB cards. It’s all one bucket, and a tiny one at that. How many new cardholders do you think a bank the size of UOB signs up each day?

I don’t know about you, but I’d find it hard to trade my new-to-bank status for what’s basically a lucky draw where the odds are stacked very heavily against me. For those who don’t have any UOB credit cards yet, there’s surely got to be a better time to jump in.

For all intents and purposes, there is no sign up bonus on the KrisFlyer UOB or UOB PRVI Miles cards right now. Thankfully, the period for this “promotion” is fairly short, and perhaps we’ll see a better offer after 31 January 2020.

It’s good that UOB’s T&Cs indemnify the bank from responsibility for any injury resulting in connection with this promotion, because I can see some people getting a strain from rolling their eyes.

Aaron Wong
Aaron founded The Milelion to help people travel better for less and impress chiobu. He was 50% successful.
Previous articleConvert credit card points to Asia Miles and get a 10% bonus
Next articlePaperweight: No more sign up bonus on the SCB X Card

“Whoever applies for JCB cards”

Hey! That card has decent lounge benefits OK? (granted, can’t use in Singapore, but when traveling abroad you can use their lounges)

and I just cancelled the JCB cards recently. Haha..