Today, Alaska Mileage Plan announced that they’re offering a 40% bonus on purchased miles on their website (it’s targeted), which is available for purchase until 7 February 2018. Previously, they offered a targeted bonus ranging from 35% to 50% depending on your account.

More recently in December 2017, they had another offer of up to 40% bonus on purchased miles.  The 40% bonus offered this time round, is their standard promotion. As always, unless you have an immediate redemption in mind, hoarding these miles might not be a great idea.

One of the more common uses of Alaska Mileage Plan is in redeeming a “return” flight to Tokyo Narita . Aaron has examined this previously so I won’t really delve into the technicalities of it. If you do it correctly, you’d be seeing a price quote as shown below.

The cost of a positioning flight to KUL(assuming you start your journey in KL) with baggage factored in (unless you’re only flying to Japan with a cabin bag) would be approximately S$80 on Scoot.

Japan Airlines flies their Boeing 787-9 Dreamliner to Kuala Lumpur, means you’ll be getting their Apex suites on this flight. Although laid out in a 2-2-2 configuration, it offers direct aisle access for every seat, and immense privacy in the window seats. (Edit : This variant of Sky Suite doesn’t operate on KUL-NRT)

On the flight back to Singapore on their Boeing 777-200 aircraft, you’d be getting their other seat offering : (Edit : JAL operates their 787-9 with this version of Sky Suites to KUL)

Both of these hard products are excellent and have gotten quite good reviews.

Is it always worth it?

After factoring in the cost of the positioning flight to KL and the cost of purchasing the miles as well as taxes, the price for the entire journey would price out at around S$900. An excellent deal if you were to consider the fact that JAL charges a whole lot more to fly to Japan in Business Class if you were to buy a revenue ticket.

However, personally,I do not think it is entirely worth it to be going via this route all the time.

Let me draw your attention to Malaysia Airlines. Our divorced neighbouring airline based in KL. Malaysia Airlines are consistently offering decent fares ex-SIN to Tokyo Narita(as well as everywhere else).

A quick check for the same period as what I have gotten from the flight quote with Alaska gives me a cost of S$1,365.30. During their sales, fares can be as low as S$1,000 RT on MH.

(Edit : At time of writing, it was possible to select both ways of KUL NRT on JL metal, however as of now, the option has since been removed and an error message appears)

Note that at this price quoted above, you would be flying on JAL’s Boeing 787-9 in their  Sky Suites II on both segments from KUL-NRT (it’s a codeshare). Not that bad of a deal. The short hop to KL would be on MH’s 737-800s. 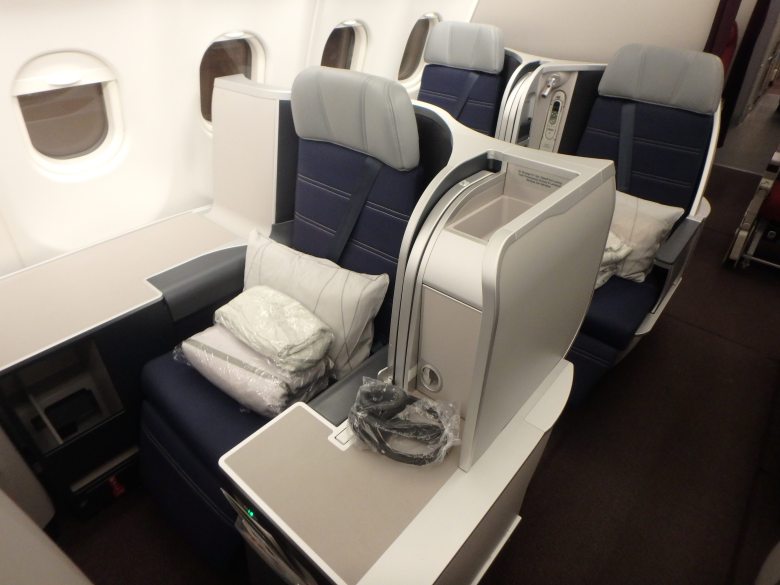 If you were to credit the flight to Asia Miles, you would earn a total of 8,888 miles (huat ah!) and if you have a Marco Polo Club account, you’d earn 120 Status Credits from these flights.

Or you could credit these to British Airways Executive Club and earn a cool 360 Tier Points and 8,848 Avios. The Tier Points earned from this flight are already halfway to meeting the Tier Point requirement of BA Silver (oneworld Sapphire) and more than sufficient for BA Bronze (oneworld Ruby). In addition, the Avios earned would be sufficient for a one-way Economy flight intra-Europe.

Note that to receive Bronze and Silver status on BA, you would need 2 and 4 flights accordingly and they must be on flights marketed and sold by British Airways before your tier is updated. The nearest location to clock BA flights is to Sydney on BA16 and BA15. 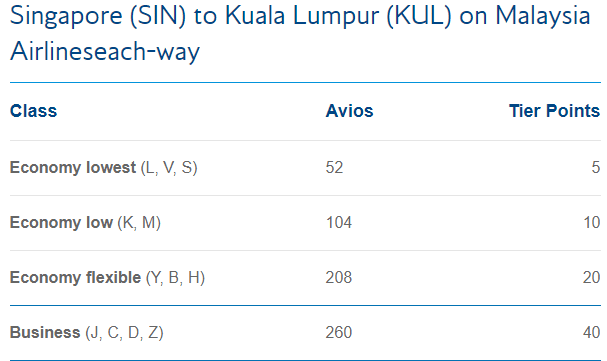 Why do I say that sometimes it might not be worth it going via the Alaska route? Well, from the revenue fare, you’d be earning elite miles and status credits as well as redeemable miles from your flight on top of the miles earned from the credit card. If you were to go via the Alaska route, you will only be getting back some value from the miles earned from the purchase of the miles and taxes. I have used the earning rate of 4mpd based on the DBS Woman’s World Mastercard for my calculations below.

I’ve made a table below detailing the value you’d be receiving from both methods :

After factoring in the value you have obtained from the miles earned via the revenue route, the effective fare paid would amount to approximately $1,078, very close to the amount paid when going through the Alaska method.

Also, another point to consider if you are redeeming via Mileageplan is that you have to be super flexible with your flight dates as availability can be scarce during peak periods.

Although I definitely agree that redeeming via Alaska Mileage Plan to get yourself to Tokyo is an excellent idea, given that you can do other routes such as SIN-NRT-BKK, paying a revenue fare would sometimes make more sense if the price difference isn’t that great. Especially so if you’re still able to fly on JAL metal when booking through Malaysia Airlines and earn yourself some elite miles/status credits in the meantime.

Matthew Chong
Addicted to luxury travel while trying not to go broke, Matthew is always on the prowl for the best deals in the travel industry. When he's not busy studying, he can be found trawling the internet and reading up on credit cards, airlines and hotels. He also wouldn't mind taking you out on a date.
Previous articleReview: Sheraton Amman
Next articleReview: Royal Jordanian Crown Lounge Amman Airport

Very well-written Matt! Glad to have someone with a clear mind while most are jumping on the bandwagon 🙂

I immediately went to the Malaysian Airlines website to check out availability – for SIN-NRT-SIN, it’s easy to get Malaysian Airlines J class. But no such luck for the JAL options; although the tab says there are seats available but once you click continue, it asks you to choose other options. Anyone else had better luck?

Other minor things to consider: the Alaskan Mileage Plan method cuts down on one layover and allows for “open-jaw” flights, as you can fly KIX or NGO to BKK

JL723/724 is no longer being operated with the 789 using Apex suites, they are the same reverse herringbone SkySuite III that is used on their 772, check the JL website.

MH does not allow purchase on JL metal both ways to NRT with the code share, you have to fly one way on MH. Although you can select those flights, payment will always error out saying the flight does not exist.

I think another more important usage of AL mileage is to redeem CX first class to Europe or US, which u can never find similar price of revenue tickets (if u depart from SIN)!

Can’t seem to find CX availability through Alaska website. How do you go about doing it?

Have to call in. Search using BA website. Alaska does not display CX availability and you cannot use mileageplan miles to redeem a CX trip originating from SE Asia

Not true. I called Alaska and got confirmation that you can fly CX from Singapore via Hong Kong to the US for 50K/70K in J/F. In fact, I’m planning to book it for May. Also, availability isn’t always the same as what you see via BA or even Quantas for that matter. The date they said there was availability for SIN-JFK (via HK) returned no availability on both, BA and Quantas.

Being able to purchase miles at a 50% bonus would definitely tip the scales in mileageplan’s favor though. Combing with purchsing and converting SPG points when the time is right makes it even more worthwhile 🙂

Hey Marko. I took the exchange rate to be at 1.40. The exchange rate you quoted seems to be from what XE Currency quotes, which will be no where near what the banks will give you. Also, the “around 900” is a round up figure.

And yes I do agree with you on the second point!

nice post… was searching a similar itinerary and came across CGK-KHH (that’s where i was originally wanting to redeem alaska miles for…) and found a cathay Biz return for $1k… have already booked… and this earns decent miles and status with alaska mileage plan…
ps… -sorry, my first post ever on the internet… maybe not entirely relevant… but you can book on CX website, choose seats, and hold the booking for 3 days…
thanks,

The best is to buy SPG points when they are on sale. They were at 40% off late last year. When combined with the 5k bonus they give for transferring 20k points to airline partners I was able to book the JAL flights in J for S$750 (incl. cost of miles + taxes + positioning flight to KL from SIN). Fantastic deal I would say.

Instead of exchanging spg points directly to alaska miles. You might want to consider exchange it to marriot points and redeem the Fly and stay package. It will bring the cost of JAL flight in J below SGD600 ( KUL-NRT-SIN). It will be even lower if we take the hotel voucher into consideration.

Yes, Marriott Air+Hotel Package is the best. You get the miles + additional nights of categorized hotel stays. Have done that many times. Even flying to Auckland using United Miles (SQ) is a steal.

I’ll look into it next time. Thanks.

Did you guys actually get this offer? I’m not seeing it on my end

i did. quite a lot of people on flyertalk too

Me neither. Cannot seemed to see it.

I didn’t receive it either 🙁

In this context it is indeed a good point to consider… until news broke about the divert from Sydney of an MAS flight. Unfortunately, just can’t shake off the negative vibes about the airline which is also the reason why their fares cannot command the premium equivalent national carriers do. On a separate note, someone was asking about CX. Their availability can be seen in Qantas FFP as well. I found out that not all partner awards released to oneworld can be booked with Alaska after being told there’s no seats to FRA and YVR when availability was wide open… Read more »

Hi, I need to buy 100,000 miles. Which card should I use to maximise my miles earnings?

Hi, why is miles on alaska mileage plan so expensive compared to lifemiles etc? Are there any sg credit card which allows redemption to alaska miles?

Hi, can someone please help? I just bought 100k miles from mileage plan. All the routes (KUL-TYO-SIN and BKK-TYO-SIN) that I checked that was previously available suddenly disappeared when I tried to make payment. I tried calling the Singapore customer service line but the line had a Singtel announcement service. Can someone help?

Hey DK. You can try asking on our Telegram group for advice! Personally I’ve not experienced this before.

Thanks Matthew – I managed to settle the issue by calling the US help desk – spent an hour on the phone before he managed to find 4 award tickets for me. Have to return 1 day earlier which is fine.