An amateur travel hacker (#notthemilelion) contemplates the impending expiry of his Hilton status and attempts to make the best of its remaining months without having to take up a second mortgage.

For Christmas 2017 I attempted to plan an end-of-year holiday travelling in style, leveraging various deals to attempt to keep the total cost manageable. I think I managed to do okay, but if you have any thoughts on how I could have further optimised this (especially with the flights, I feel) I’m always happy to learn – go ahead and leave a comment! #lifelonglearning #majulahsingapura

Having already planned for a trip to the US in July, I aimed to do something a little closer to home. Based on the various discussion threads on FlyerTalk, particularly a thread dedicated specifically to sharing of opinions on the best Conrad properties, I narrowed my hit list down to Tokyo, Macao and Hong Kong.

This was initially my grand masterplan to empty out my Hilton Honors point balance – at 80,000 points per night, combined with the 5th night free benefit for (silver and above) Hilton Honors redemptions, I planned to redeem five nights at the property for 320,000 points (about $1920 if you value the points at 0.6¢ each). Not really the best of deals, but considering that the revenue rate was about ¥230,000 (S$2700) I figured it was not a terrible way to burn off my points while enjoying Diamond benefits.

First, I managed to get my Diamond status extended one extra year. Now that I had another year to enjoy its benefits, saving my points for Conrad Maldives seemed like a very attractive proposition…

Second, a number of flash sales came up later in the year. The most enticing one I’d observed was a 50% discount for Japan (and South Korea) properties. 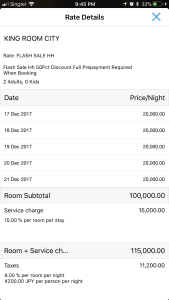 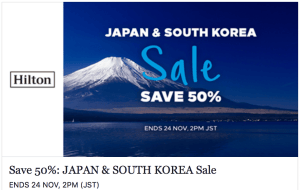 The anticipated damage was thus brought down to a more manageable ¥115,000 (S$1,350). Still not cheap, but definitely a lot more affordable. Coupled with a booking via the Citi Prestige concierge to activate the fourth night free benefit (a ¥20,000 rebate), I was looking at an out-of-pocket cost of ¥95,000 (S$1,120). A 4-night booking would have been a more optimal combo, but since the rest of my plans had been firmed by then, I decided to stick with the original 5-night plan.

Anyway, at about S$220 per night, I wasn’t complaining about staying there a little longer.

The plan for this was rather straightforward – redemption rates for the property were pretty low at 40,000 points per night (which I value at S$240), so I went ahead to lock in two nights for 80,000 points.

Interestingly enough, when I made the redemption the higher-tier ‘KING DELUXE CITY VIEW’ room was offered at the same rate as the standard ‘KING DELUXE’ room. The only difference was probably the view, but since it cost me nothing, I figured why not?

For Conrad Hong Kong I made use of a different strategy. Awards stays are also priced around 80,000 points and I was not too keen on spending S$480 worth of points per night at that property. I was also only planning a short 2-night stay, so the 4/5-night combos mentioned above didn’t really help. Knowing this, I decided to give the Entertainer a go.

The Entertainer (essentially an electronic coupon book) is probably better known in Singapore for offering many 1-for-1 deals at various eateries ranging from as Yoshinoya to high-end (high cost) establishments such as The Fat Cow. Something that’s mentioned a little less frequently (though Aaron’s previously mentioned it with regard to Conrad Koh Samui) is that these deals exist for selected hotels as well.

How this works is that you email the property informing them that you wish to make a reservation using the Entertainer 1-for-1 offer, they proceed to make the reservations for you, and you redeem the electronic coupon during check in. For Conrad Hong Kong, this was done by making a full revenue reservation for the first night followed by a complimentary reservation for the second. I received full elite recognition throughout my stay and had points credited for the first night, though I’m not certain if the second night counted towards status requalification (I suspect not).

I was quoted 3,740HKD (S$635) for the reservation, so it worked out to about S$318 per night at this property. I was somewhat dissatisfied that the nightly rate was effectively higher than Conrad Tokyo’s, but since this was a cancellable rate and saved me the hassle of looking out for other offers throughout the year I decided that it was good enough.

Unfortunately, it seems like Conrad Hong Kong (also, Koh Samui) is no longer listed on the Entertainer for 2018 – I’m not aware of any good deal for this then, other than perhaps waiting for an opportune flash sale to come by once more!

I hadn’t actually redeemed anything on Asia Miles before, but started considering giving it a go after the KrisFlyer devaluation early last year. I took the chance to explore the utility of companion ticket awards and got myself a pair of tickets from SIN-HND, with a Hong Kong stopover on the way back.

The specifics are detailed in the post above. I wasn’t too excited about the regional business hardware I’d be in for most of the trip, but it seemed like the most efficient way to get to my intended destinations in relative comfort.

The ground experience, though, I was pretty excited about. 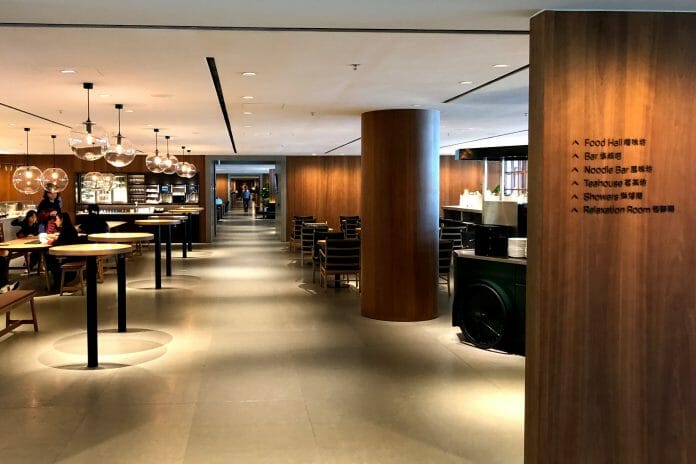 Earlier last year Aaron had visited 3 out of 4 of the Cathay Pacific business class lounges in HKG airport, and since the comments seemed to indicate that the missing lounge from his collection (The Pier) was the best of the lot, I was rather excited to have the chance to visit and review it on my way to Tokyo. 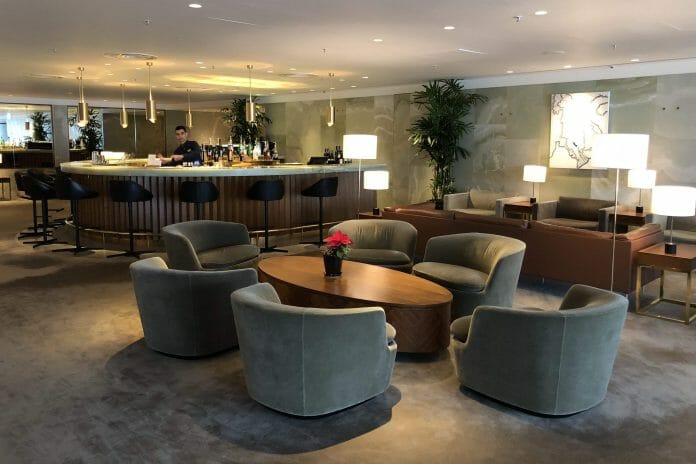 The Milelion also reached out to the CX team to see if we could possibly do a review of their First Class lounge experience while I was in Hong Kong.  They graciously agreed and invited me to visit The Pier First Class lounge before flying back to Singapore.

So this was actually rather unplanned, but definitely something I looked forward to greatly.

The trip actually started off with a visit to the Cathay Pacific Business Class Lounge at SIN Terminal 4, followed by a SIN-HKG flight on a Cathay Pacific A350 aircraft, but since Aaron’s already reviewed both of those (excellent) places/products I thought I’d skip ahead and begin the trip report with my visit to Hong Kong’s lounges.

I’ll probably be cranking out the actual reviews in the weeks ahead – but first up, instead of delaying it any longer, I’d start by sharing my review of The Pier First Class Lounge… soon! Really soon.

Louis Tan
Louis believes he caught the premium travel bug after attaining KrisFlyer Elite Gold and occasionally being upgraded while shuttling between the UK, Singapore and Japan (in economy class). These travels have led to a wonderful marriage, as well as a burning desire to avoid flying long-haul economy. He previously travelled with a gryphon plush toy, Griffles, which often stood in for him in vacation photos. Griffles is mostly busy with entertaining a toddler these days, but still manages to continues amusing (and confusing) air stewardesses, hotel staff (and just about everybody else) all around the world.
Previous articleLooking at the Visa Luxury Hotels Collection’s limited time offers
Next articleSingapore Airlines announces London and Hong Kong as next two routes for new A380 cabin products