Getting a pre-departure COVID-19 PCR test in Munich is simple and easy, with turnaround times as fast as 35 minutes.

While fully-vaccinated Singapore residents do not need a pre-departure PCR test (PDT) to fly to Germany, a PDT will be required in the opposite direction. 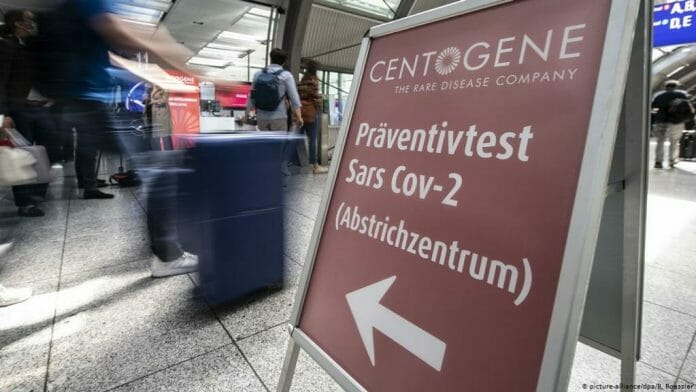 This applies to all passengers from Germany, whether they’re on VTL or non-VTL flights. While the latter were previously exempt, the rules will change from 10 September, harmonising requirements across the board.

The good news is that it’s extremely easy to get a PDT done in Germany, with faster turnaround times than in Singapore. The bad news is that testing positive has some rather unpleasant implications, but hey, you knew the deal going in.

As a reminder, here’s the testing regime for VTL travellers arriving from Germany, which replaces the SHN requirement.

I’ll write about the testing experience in Singapore separately; in this post I’ll focus on the first swab in Germany. PDTs must be done within 48 hours of departure, so build it into your itinerary.

If you opt for the regular test, turnaround time is generally 24-36 hours. However, there are express options that promise results in as little as 35 minutes! You’ll pay handsomely for the privilege, but the advantage is that you can slot it into your departure plan. Show up at the airport maybe three hours before, get your test result, check-in and proceed as per normal.

Of course, if your result comes back positive you’ll have a heck of a lot of last-minute changes to make…

Where can I do a PDT in Munich?

But we’re getting ahead of ourselves. Let’s first talk about where you can do a PDT.

The MOH provides a list of accredited providers for overseas COVID-19 PCR tests. Previously, two specific lists were provided for Germany. However, these have since been removed, and the advice now says that travellers should seek a test provider approved by the Ministry of Health equivalent.

Singapore Airlines echoes this on its website. Find a place that doesn’t look like it’s run out of the back of a van, and you’ll be fine.

After all, if there’s one thing Munich has an abundance of, it’s testing locations. You’ll find them all around the major tourist areas, within shopping malls, even inside historical attractions (there’s one in the courtyard of the Residenz).

However, make sure the location you’re visiting provides PCR tests. Some places only provide schnelltests (ART), which won’t be sufficient to board a plane to Singapore.

Here’s a list of providers you can consider; keep mind this is far from exhaustive.

I decided to go with Medicare (€75), since it had a location at Marienplatz Galeria Kaufhof, very near where I’d be staying.

Booking an appointment is advisable, but I don’t see why they wouldn’t take you if you just showed up. All the swabbing facilities I checked out had minimal to no queues, and it doesn’t take that long to swab someone anyway.

When registering for your test, please, please, please triple-check your personal information, especially your name, date of birth and passport number. This is what gets printed on your results certificate, which you need to show at check-in. Once you enter this information, you can’t modify it without doing a brand-new test.

My flight back to Singapore was departing at 1.15 p.m on 8 September, so I booked a test slot at 2 p.m on 6 September, roughly the 48-hour mark. The Medicare test centre at Marienplatz is easy to find, just a stone’s throw from the gothic Neues Rathaus building everyone’s snapping pictures with.

I was surprised that no one checked my passport or identity card upon arrival (if anything, they were more concerned about verifying that I’d paid!). I mean, how were they to verify that I was the person whose name would be on the results slip?

I don’t know if it’s just the German honor system at work again (train stations don’t even have gantries), but I could see some major issues with this…

After registration, the entire swabbing process took less than three minutes, most of which was spent trying to communicate with the swabber. I was first swabbed in the throat, and then in the nose, and that was it. Sorry, those who hate nose swabs- I was initially under the impression that some locations offered the less-invasive gargle test, but a casual search turned up empty.

I was then given a QR code sticker and told repeatedly not to lose it. I’m not sure why, because the results were emailed to me anyway. I think the concern is that you may have mistyped your email address during registration, in which case scanning the QR code is the only way to access your results.

There then started an anxious wait, but 23 hours later, I got the good news: negative test. 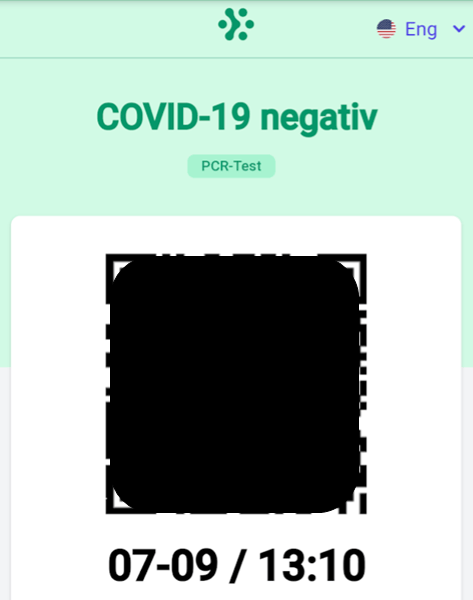 I was sent a link to download a copy of the certificate in German and English. Medicare uses the Eurofins lab, which might sound familiar to those of you who have taken a Royal Caribbean cruise to nowhere. 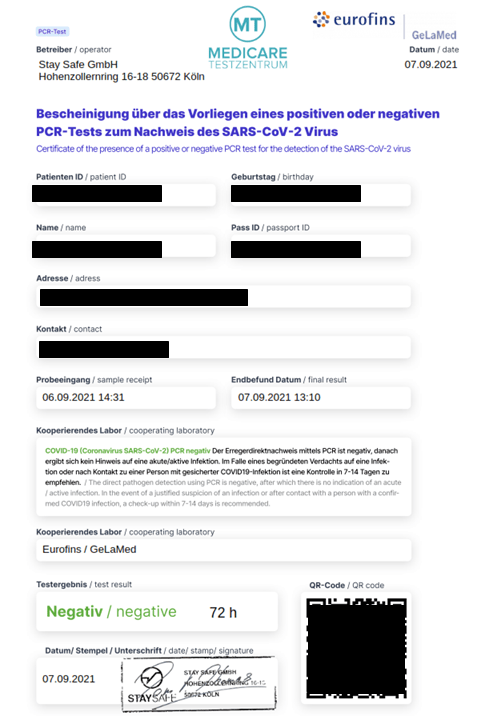 Notice how the certificate states the following:

These are vital details that will need to be reflected for the test to be accepted at check-in.

Here’s two more things you need to do before you fly.

All travellers, including Singapore Citizens, Permanent Residents and Long Term Pass Holders, must complete the SG Arrival Card within 3 days prior to date of arrival in Singapore.

Inside is a heath declaration form with the following questions: 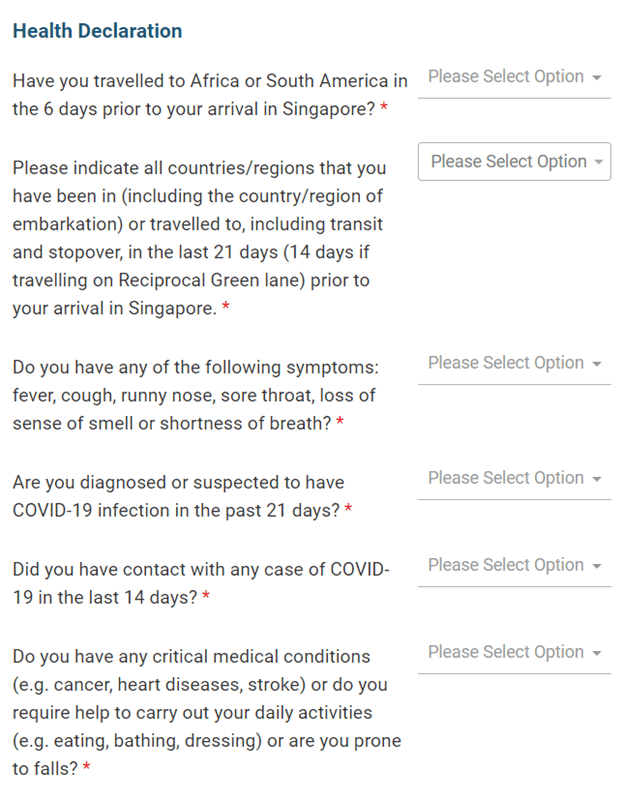 Note in particular question 2, which requires you to disclose all the countries/regions you were in over the past 21 days, including transits. I mentioned before that the VTL arrangement does not permit you to travel to neighbouring EU countries, unless you’re willing to return to Germany and spend 21 consecutive days there before coming to Singapore.

You may be wondering how they’d know, when the EU is essentially borderless. Trust me, there’s ways to find out. Knowingly providing false information is a serious offence; play stupid games, win stupid prizes. 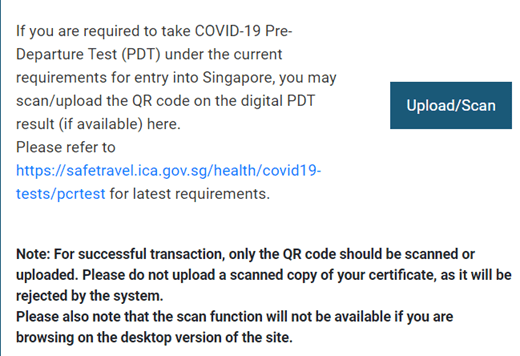 The health declaration form has an option for you to upload your PDT results, but I didn’t bother since it requires you to crop the QR code out. The system won’t accept the scanned copy of your certificate, and you’re saving at most a minute or two at check-in.

Book and pay for your post-arrival test at Changi 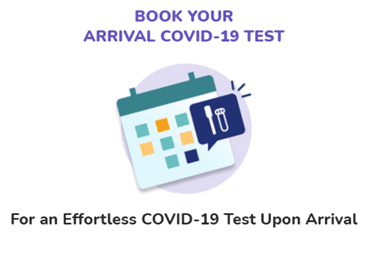 The final thing you’ll want to do is book and pay for your post-arrival test at Changi.

To do this, register an account with the Safe Travel Concierge, add a trip and book a test. The process shouldn’t take more than five minutes, but it’s much easier to do on your desktop in a hotel room than on-the-go in the terminal.

When adding your trip, remember to check the box if you’re travelling on a VTL flight. 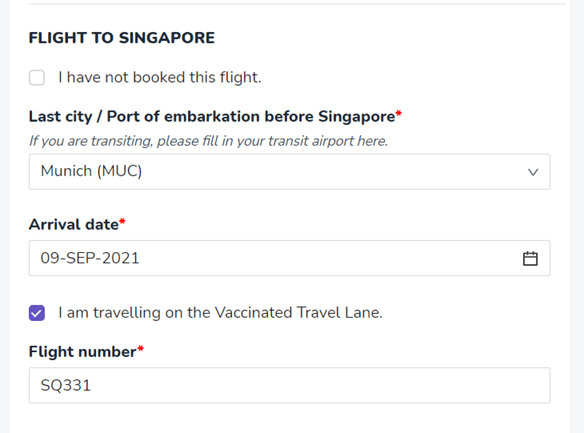 The Changi Airport PCR test costs S$160 and can be paid online via credit card. AMEX is accepted, and since I didn’t know the MCC, I paid with my AMEX SIA Business Card for a guaranteed 1.8 mpd.

After payment you’ll receive a QR code, which you’ll show upon landing. 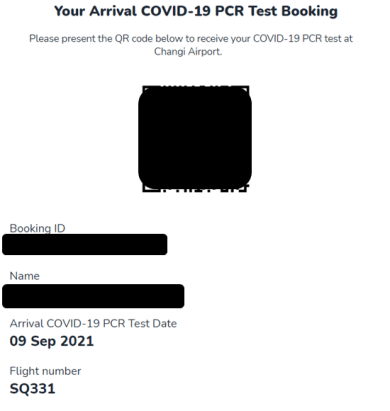 Getting a PDT done in Munich is relatively drama-free and easy to slot into your schedule. Turnaround times are well within promised limits, and some places offer walk-in options.

I realise the PDT has the potential to cause a lot of anxiety, especially given the implications of a positive test result. But that’s simply part and parcel of the travel experience now. If you’re travelling to anything other than a Category I country/region, you have to be prepared for the possibility of extending your trip by a further 21 days (14 days from 7 Oct 2021).

I suspect we won’t see any serious leisure travel until that requirement is modified.

Thanks for a very detailed write-up.

What happens if one of the travel group is tested positive while the rest are negative, do the rest being the close contact need to be quarantined in Germany?

it is possible. it depends on what the local health authority says.

They’re making it up as they go

Hi Aaron, thanks for the wonderful and detailed report. I like to know in your Medicare Germany Swab test certificate, that address is Germany hotel? Or Singapore address? And do they verify your Germany hotel address? If I am not sure the last 2 nights of my hotel before I depart to SG, how do I furnish my address?

I put my Singapore address. I don’t think it really matters though!

Thanks for sharing. Then I will put my SG address too. 🙂

Next qns: When you arrived at Changi Airport the isolation address you need to declare at ICA, has to be NRIC address? Or I can put the address of my friend’s whom are traveling with me to Germany? Cos she is living alone, so it might be better we will spent there for the next 7 days until my 7th day swab test is negative before I return home.

Thanks for taking time to answer my questions.. 🙂

Hi, may i know if rt-pcr is accepted for entry into SG via VTL?

do you know if we do the test on Saturday, they can return the results on Sunday?

Thanks so much for this information Aaron. i was doing the research for my boss and find this very useful

Thanks for the detailed report. Just curious did you manage to find out the mcc for arrival test payment via website?
I remember getting 4mpd on dbs woman’s card, but would like to use another 4mpd card to consolidate my points, so knowing the actual mcc would help. 🙂

nope, AMEX doesn’t tell you MCCs, even if you ask really nicely.

Im traveling to Germany in November! thank you for your very insightful posts. I’ve been reading every experiences from your trip to Munich. Wanted to do the Category II travel and 7 days SHN but since as of 10th sept they enforced PDT test mandatory for VTA and Non-VTA, Figured there’s no point to weigh any differences now.

Corona Teststelle does throat swabs which I found far more pleasant than a nose swab.

thanks- will check them out when i’m back.

Is there a difference between RT-PCR and Rapid PCR tests (1-2hr results)? Are both accepted for pre-departure testing for returning to Singapore?

Both are fine. There is a big diff in price

Thanks a lot. It’s a bit hard to tell from ICA website.

Hi, Which CC did you use to pay for the PCR in Munich ? I mean what is the MCC please ?

Thanks for this v informative post! Do you know if the PCR has to be taken at the same city of departure? I’m planning to take it at Berlin 2 days before flying out of Munich.