When I mentioned I’d be reviewing the Hilton Munich City, I braced myself for the inevitable ridicule.

Review a Hilton? How precious. And while you’re at it, perhaps you’d consider a write-up about this up and coming gastro-concept called McDonald’s?

The scoffing is understandable. After all, nothing screams “big box hotel” like Hilton. You can probably picture the design template right now: cream colored walls, beige curtains, wood accents, a grand lobby past its prime.

This isn’t so much a bug as it is a feature. No one books a Hilton expecting breathtaking architecture or life-changing gastronomy. No, they book it because they want to know what they’re getting. And predictability is something Hilton excels at- a tightly-clustered standard deviation.

The Hilton Munich City is located across the river from Marienplatz and the old town district. And yet it’s eminently reachable, either by taking the S-Bahn (2 stops) or a leisurely 20-minute walk. There’s a direct train to the airport too, and on the whole, very little to dislike about the location.

From the moment you step inside the hotel, you know this isn’t your grandfather’s Hilton. Hilton Munich City underwent a US$50 million renovation that finished in August 2019 (bet management was cursing their luck half a year later), involving a full remodel of all public areas, guest rooms, the fitness centre, bar and restaurant.

The results speak for themselves. It’s a gorgeous makeover, and if this becomes “template Hilton”, I really wouldn’t mind.

I was so infatuated with the lobby that I came back later that night to snap photos when it was empty.

My room was ready when I arrived just after 12 p.m. As a Hilton Diamond, I was told I’d receive complimentary breakfast and evening cocktails (more on that below). Late check-out wasn’t offered, but I didn’t need it anyway since my flight the next day would be at 1.15 p.m.

As with all hotels in Germany, masks had to be kept on while indoors, and contact tracing forms were required as part of COVID measures. None of these were major inconveniences.

A few days before arriving, I received an email from Hilton telling me about a room upgrade courtesy of my Diamond status. 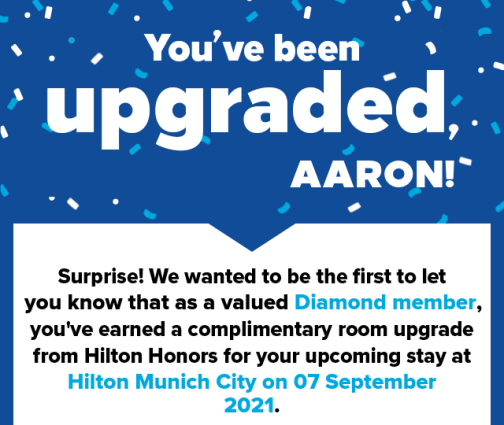 I get why Hilton sends these out- it’s part of a “surprise and delight” strategy that’s meant to give guests warm and fuzzy feelings. In reality, however, the upgrades are seldom impressive. Most Diamond members usually get upgrades to Executive Floor rooms, with benefits they’d have received by virtue of their status anyway.

Sure enough, I basically got the room that I booked (or rather I got it on the second try; the first time round they gave me the key for a room that was undergoing cleaning).

Still, it was very pleasant change from the cookie-cutter Hiltons I’d come to know from my years as a road warrior. Again, if this became the new default Hilton design, I doubt think you’d have too many complaints.

The king-sized bed featured the standard Hilton mattress, which I believe is a Serenity Bed from Serta. It’s definitely on the softer side, but not unpleasantly so.

Two type G plugs were catered per bedside, with two built-in USB plugs on the right side (facing the bed).

But the other side wasn’t forgotten either, with an alarm clock radio adding a further 2.1A USB port.

One unfortunate thing about the room is that it didn’t have a proper work desk. I don’t know if Hilton simply thinks millennials don’t want this, but a round table and slouchy armchair is no platform to get work done. I ended up fleeing to the lobby and its much more conducive setup.

By the window was a chaise sofa and miniature table, good for taking in a coffee while enjoying the view from outside.

Not that there was much of a view; my room looked out to the inner courtyard. This meant absolute silence at night, however, so it’s a matter of swings and roundabouts.

I’ve seen hotels come up with some elaborate mini-bar systems, but this one’s new: two bottles of water were placed on a weight-sensitive rack, which would automatically bill you €6 (!) per bottle if they were molested. These were free for Silver, Gold and Diamond members, but still, €6 for a 500ml bottle of water is a textbook example of price gouging.

Next to the toilet was a wardrobe (I couldn’t turn off the light, no matter how tight I closed the doors), containing an ironing board, hair dryer and digital safe.

The bathroom area featured an attractive backlit mirror, single vanity, and shower. Unfortunately, there was no bidet, making it 2 out of 3 hotels without the lifesaving device.

The shower area didn’t have the best design either, with the half-glass design allowing water to easily splash out when bathing.

Bathroom amenities are the standard Crabtree & Evelyn stuff. Unlike Hilton hotels in Turkey, those in Germany don’t have a problem with “Creative” knockoffs.

Since the hotel’s executive lounge was still closed, Diamond members and those who booked executive rooms were offered evening drinks and canapes at Juliet Rose in the hotel lobby.

No two ways about it: this is a stunning-looking space. If someone showed me these photos without context, I’d never have guessed they were taken in a Hilton.

The famous German honour system comes into play once again here. At check-in, guests with lounge entitlements get “VIP” stamped on their keycard folder. During cocktail hour, you just flash this and head on in; there’s no verification of room number, much less identity.

The drinks selection consists of soft drinks, beer and wines.

Sparkling wine is available, but it’s sekt instead of champagne. I find sekt to be a fair bit sweeter than champagne, and two glasses were about as much as I could take.

While the atmosphere was gorgeous, the canapes were forgettable. Four small plates were served (all cold), and I didn’t think any of them warranted a second bite, much less a second helping.

Based on pre-COVID reports, the lounge food was never a highlight, so I’m not very confident about this improving down the road either.

Hilton Munich City has a keycard-accessible gym that’s open 24/7. It’s got everything a traveller could need for a quick workout- treadmills, elliptical machines and free weights.

Breakfast was at MONA, and costs €24 per adult (complimentary for all Hilton Gold/Diamond members). Just like Aloft and Kempinski, it’s a self-serve buffet. Grab a pair of gloves, wear your mask and help yourself to the food.

In terms of spread, this was somewhere between breakfast at Aloft and Kempinski, though decidedly closer to Aloft.

Guests had a small selection of (not freshly-squeezed) juices…

…various breads with a toaster… 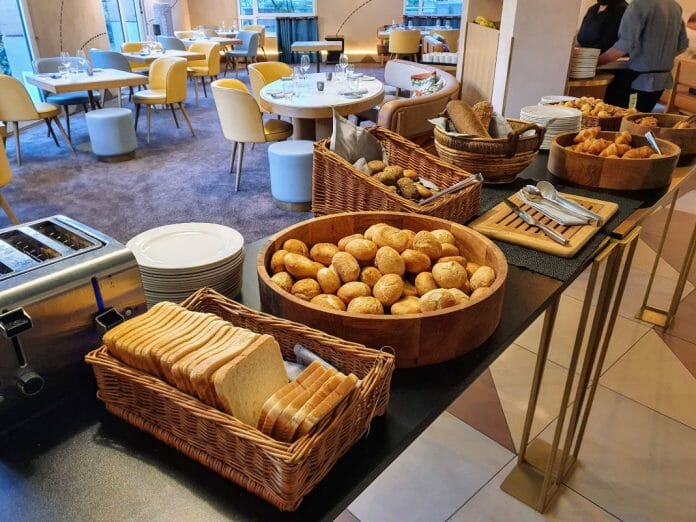 …and fresh fruit with smoothies.

Like I said, this was a much more modest breakfast. It covered all the bases, but there’s no way I’d be happy paying €24 for it.

Hilton Munich City shows that the brand is perfectly capable of sprucing up its tired, yesteryear image. While it may have been an unremarkable stay otherwise, the renovated rooms and lobby gave a refreshing, dare I say boutique feel.

Perhaps this is where Hilton turns the corner. We’ve all seen the 3D renders of the upcoming Hilton Singapore Orchard, and they look equally promising too. Natural light, modern design, muted color palettes- who are you, and what have you done with our Hilton?

Until the rehabilitation is complete, however, perhaps the highest praise we can give a Hilton is “it doesn’t look like a Hilton”.

That looks good, and btw it actually might be the design direction Hilton is moving towards. Closer to home, I was also pleasantly surprised when I stepped into the Hilton KK (also a relatively new one) – those gold accents and the darker colour scheme are there too

oh yes, i can sort of see the DNA here too. well it’s about time!

It’s interesting that King Guest, King Deluxe and King Executive all using same pics… I wonder what the actual differences would be…

To be fair, Hilton Sentral KL was petty since day one.. ☺️

I saw Indonesian counterfeit of Aromatherapy Associates at Conrad Bali in 2018. Guess it really depends on the owner

Any reason why you flew to Munich this month instead of waiting for Oktoberfest? I get the VTL and all but surely you could have made better use of your trip if you waited a couple of weeks.

In any case Oktoberfest starts in September every year

and also i’d be that idiot drinking wine at oktoberfest. i never got attuned to the taste of beer.

18 Sep.. Which is why I said he just needed to wait a couple of weeks. Unfortunately it seems it was cancelled again this year so nothing was lost.

Probably you can follow thru the whole trip report, you will know the answer.
FYI. “The mission is to recce and report, and if all goes well…”

I’ve been to plenty of GREAT HILTONS, like the Hilton Lake Como, Hilton Tangier, which completely blow all the competition out of the water. Singapore and the US Hiltons are the ones that suck.

i’m trying to think of the best hilton i ever went to, and am drawing a blank. hilton frankfurt airport was decent enough, and the building is a very interesting design, but the interiors are solidly old hilton

Both the Hilton Frankfurt Airport and Hilton Munich Airport went through a refresh and the new ‘alpine’ rooms are stunning. There are still some old rooms in the mix though.

Hilton Budapest in the Old Town is amazing too!

Artist Impressions from the new Mandarin Orchard convert looks very similar to the Munich one as well, it could really be a new brand standard.

Well hopefully that’s true, I’ve only ever experienced the Hilton Singapore and while service is great, the room is so bad i couldn’t be paid to stay there, much less the other way around.

I think the cookie cutter designs are mainly confined to US and the airport Hiltons (and maybe the Singapore one). I thought Hilton Frankfurt City Centre (has a rather sophisticated color palette), Hilton Tallinn Park (LED strips galore) and Hilton Osaka (traditional Japanese elements) all had their own individual character when I stayed. On the other hand, Hilton Tokyo and HIlton Sydney were pretty boring affairs.

Aaron, the form for the hotel check-in says that you have to submit a negative PCR test every 72 hour. 1) Does it mean that if you had a four-night stay at the hotel, you needed to do a test and submit it to the hotel??? 2) Does it mean that everywhere you go in Germany (if you marked your stay as leisure), you have to take a PCR test EVERY 72 HOUR? That would be a major deal-breaker!

If you’re unvaccinated, sure.

are there any cards that still give discover status?

The lounge is now open from 10-5 although breakfast/evening drinks are still at the restaurant and bar as before.