My experience flying out of Changi Airport during COVID-19

If the last time you flew out of Changi was pre-COVID, you might be in for a bit of a shock the next time you set foot airside...

While I must have travelled in and out of Changi Airport more than a hundred times, nothing quite prepares you for the post-COVID experience.

Although it’s the same general process, i.e. check-in, immigration, boarding, there’s obviously a very different energy around Changi these days. Gone are the crowds of businessmen, holiday-makers and students, replaced by cleaning robots, doffing stations and the pervasive smell of disinfectant.

Here’s what I encountered on the way to Germany.

Following the Changi Airport COVID cluster in May, terminals were closed to non-travellers for three months. They reopened to members of the public on 1 September 2021 (2 & 4 remain closed), which means that friends and family can accompany travellers all the way till immigration once again.

At check-in, I was asked to present proof of vaccination, or a negative PCR test. They can’t accept the TraceTogether homepage, so you’ll need to show the certificate generated from HealthHub with your IC number on it, or the certificate from Notarise with your passport details. Either one is fine, and both digital/physical copies are accepted. 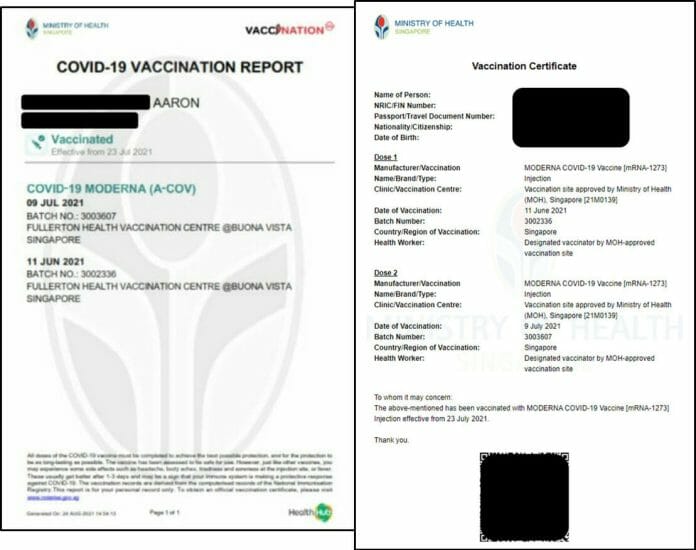 I’ve been informed by Singapore Airlines that I could actually have done this verification online (for flights to Germany only), but I didn’t see the option during online check-in. I’ll keep an eye out for it on my next flight.

Apart from that, there’s very little different about the check-in process.

The main difference I noted when entering the secured area is that no one scans your boarding pass and checks off your details anymore. Instead, I was ushered through to an X-Ray machine for my hand carry bag, after which I proceeded straight to the automated immigration kiosks.

The immigration kiosks have changed. Previously, they relied on fingerprint scans to verify your identity. Since it’s no longer ideal to have everyone pawing the same area, it’s been upgraded to an iris identification system. We can’t attribute this solely to COVID of course, plans to implement this system were announced way before it happened.

I can safely say I’ve never seen the transit area so dead before. It’s not just the lack of passengers, it’s the fact that more than 50% of the concessions are closed, as are Changi’s various attractions. Lighting has been dimmed as well, giving it a somber feel at night. You know there’s something wrong with the world when Burger King is closed…

To be sure, the essentials are still there. A handful of restaurants and casual eateries continue to operate, serving mostly airport staff. The pharmacy, money changer and (of course) duty-free shops are open as usual. But it’s skeleton crew kind of stuff, and disheartening to see.

You can find a full listing of the shops, restaurants and services still in operation here.

Eligible passengers can also visit either of the two airport lounges currently open in Terminal 3: Singapore Airlines’ SilverKris Lounge, and the SATS Premier Lounge (I’ll post some photos and a walkthrough in a separate post). The latter is available through Priority Pass, Dragon Pass and LoungeKey.

As you walk through the transit area, you may see caravans of transit passengers moving (more or less) single file, led by PPE-wearing airport staff.

(1) are basically treated like Singapore residents, and can dine and shop within the zone of the B and C gates while waiting for their next flight. They can also visit the SilverKris Lounge (separate seating area) or SATS Premier Lounge, or book stays at the transit hotels in Terminals 1 or 3.

(2) will be ushered directly to a transit holding area (THA) which has its own self-contained snooze area, nursing station, internet stations and vending machines. Food delivery from airport F&B outlets can also be ordered.

While the idea is to keep group (2) as sterile as possible, some mixing is inevitable, particularly at security. No sooner had I deposited my items on the X-ray machine than a whole troupe of transit passengers showed up and started doing likewise behind me.

I don’t know if this was a breach in protocol, but it’s possible you’ll have transient contact with transit passengers elsewhere in the terminal anyway, since the chaperones don’t always manage to keep their groups in a tight, orderly file.

It sounds intimidating, but if you’re boarding a flight, you’ll have to enter Zone 1 at some point. The area is off-limits to passengers until they’re within 75 minutes of departure, and in any case I can’t imagine anyone wanting to stay there longer than necessary. Seriously, enjoy the lounge a bit more or something.

My flight to Munich was departing from Gate B3, and an overwhelming sense of deja vu hit me as I entered the holding area.

That’s because the B gates were used for Restaurant A380 back in October 2020, with two aircraft parked at B2 and B4.

It’s taken almost a year, but at least we can finally get on a plane that goes somewhere!

If there’s one nice thing about the new normal, it’s that the boarding process has become more orderly. People don’t bum rush the gate and start queuing ahead of time anymore.

Instead, transit passengers board the plane first, followed by those originating from Singapore (in the usual priority, i.e. premium cabins and elite frequent flyer members first). The idea behind this arrangement is to minimise mixing between the two groups, and back-to-front boarding is used.

The experience onboard is of course different too, which I’ll touch on in my next post.

With the closed shops, scaled-back amenities and restrictions on movement, there isn’t much of a reason to come to the airport early right now (unless maybe you want to hang out at Jewel). That might be the idea, however, since the current priority is to make the airport a safe place to enter and exit Singapore, rather than a destination to linger.

In a way, Changi feels like a giant machine on standby mode, a low-power hibernation to see out the winter. And with any luck, spring will come soon.

enjoy your vtl holiday aaron! looking forward to the articles!

What a depressing sight!! 🙁

cheesecake
Reply to  Starved for travel

Indeed. Particularly the pic where chairs were wrapped in cling film and stacked outside Pret A Manger…

I hadn’t realised there will be transit passengers *in the plane*. Would any of these be from high-risk countries? What’s the health criteria to fly an SQ flight these days? Seems a bit pointless to take pains to segregate transit passengers from local passengers, only to have everyone meet and co-mingle for the next 12 hours in the aircraft, isn’t it?

the theory goes that passengers will be kept in separate zones on the plane, and since air in the cabin travels vertically rather than horizontally, the risk can be managed. i believe they also need to do a PDT if transiting via changi.

however, i’m not sure if transit passengers have their own dedicated toilet onboard, and you’re right, it’s not foolproof. but few things are.

I flew out of Changi a month ago and it was absolutely disheartening. It pains your heart to see the airport like that. I can only imagine what airport staff, airline crew and other businesses affiliated with the airport are going through.

“The main difference I noted when entering the secured area is that no one scans your boarding pass and checks off your details anymore.”

Glad this has been removed. It’s always been a redundant step anyway.

Not sure if it’s tongue-in-cheek, but I loved that pic of Lotte Duty Free being open, with its vast array of alcohols on display, whose caption was that of an “essential shop”. LOL

if duty free shuts down, i think we’re in ragnarok territory.

Actually they did close the duty free shops when there was the Changi cluster.. nothing was open then, I flew through Changi in May this year, it was really depressing…

They used to conduct the manual checks twice! Once before entering the glass doors and another immediately after the immigration counter/passport machines. Still, I’ll take that inconvenience over the departure process at Tel Aviv anytime.

Any gifts from Germany for your loyal readers?

I hear a Rimowa lucky draw coming up… hint… hint.

Even pre covid i would go to the boarding gate only towards the boarding time lol… idk who and why would people go earlier than that.

I usually retreat to a lounge but I made it a point to buy food and eat at the stalls. We need to support them at this difficult time.

As far as crossing paths with transit passengers, we were asked to wait outside until the transit passengers went through to the gate. Seems like it really depends on how strict the individuals on duty are in keeping to the protocols.

Have a good flight, Aaron.