Because cost cutting your way to profitability is always a good idea.

Ah, British Airways.  You gotta hand it to Alex Cruz. When he’s not wearing a hi-vis jacket in an operations centre or implementing a buy on board menu in coach, he’s ensuring that British Airways will soon have the distinct honor of being the only LCC with a first class cabin.

I have yet to make my maiden British Airways flight, but if my experience at their lounge in PHL is anything to go by, I think I’ll delay that as long as I can.

Let’s first start with the Qatar Airways check-in process, which was fairly standard. Qatar operates out of Terminal A East at PHL (all international flights are out of Terminal A). The terminal was almost empty when I arrived at 7am for my 9.40am departure. You can see how PHL is decked out for Christmas already. 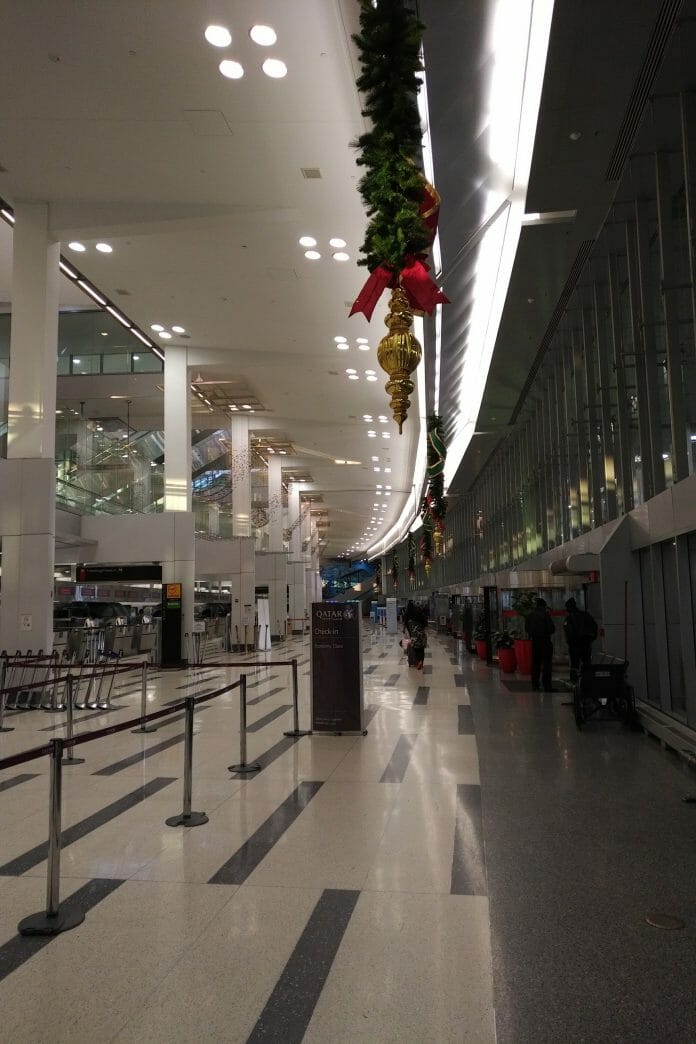 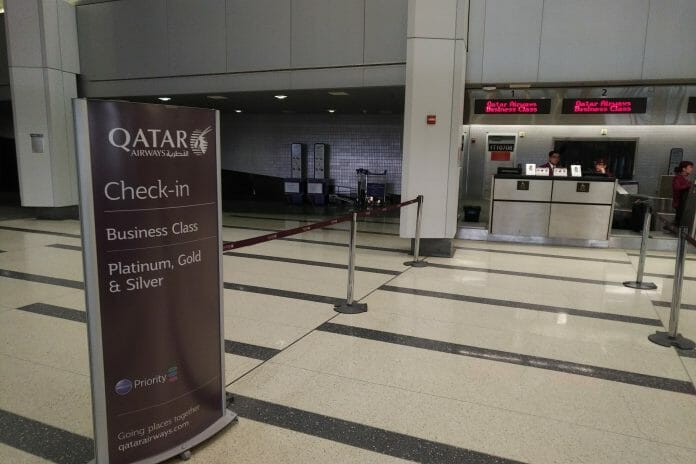 The only interesting issue that came up was when I requested to short check my bags to Doha. I have a 20 hour layover there when I’m going to leave the airport and head to a hotel, so I wanted my toiletries and clothes with me. The counter staff said it was against policy to short check, but in the end they agreed to do so because I only needed to short check one bag- the other (with shopping and stuff I didn’t need during my layover) would go straight to Hanoi.

I chatted with the staff about this policy and it turns out Qatar’s actively aware of throwaway ticketing tactics being used by some customers and this short check policy is to prevent it from happening. Since I was only short checking one of my bags they agreed I wasn’t a “throwaway risk”, but mentioned that as a matter of policy they wouldn’t do it for other customers. So it’s not a system limitation or anything like that, in case you’re wondering about the future.

Once I was checked-in, I headed up the escalator near the counter 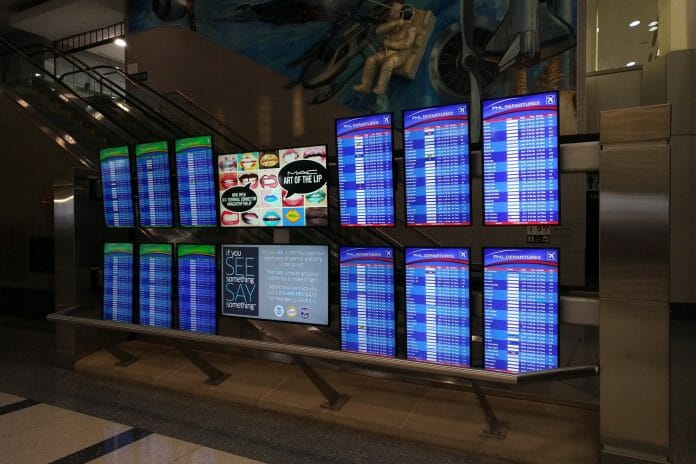 And promptly ran into one of the slowest moving TSA checkpoints I’ve ever seen. It wasn’t that the line was long, it was that the screening was incredibly slow. Qatar does not participate in PreCheck and there’s no expedited security line for First and Business class passengers here, so it’s first come first serve.

After a 40 minute wait (and there were only 15 people ahead of me in line!) I was finally through and promptly sought out the only lounge option available- the British Airways Galleries Lounge. There are actually two lounges in PHL’s Terminal A. However, the American Airlines lounge is currently closed for refurbishment as they prepare to launch the new and improved Flagship Lounge in late 2018 (I’ve visited a refurbished Flagship Lounge in JFK and the experience is excellent).  This leaves passengers with the British Airways Galleries Club.

The lounge is directly after the TSA checkpoint and has a Qatar Airways welcome sign outside, almost as if to remind passengers that yes, this is a real lounge! 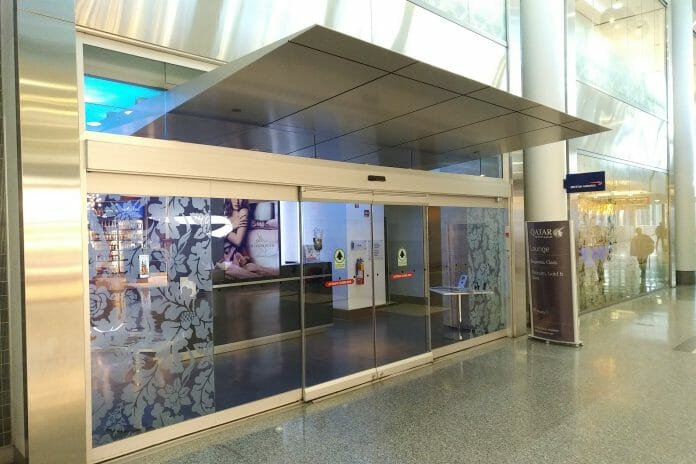 British Airways actually only operates one daily flight from PHL to LHR (with a further two codeshares operated by AA), so on first glance it’s a bit of a strange decision why they’d operate a dedicated lounge here. 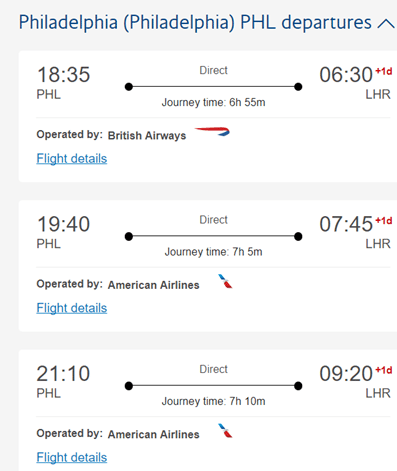 It seems that they’re justifying the cost by serving as the contract lounge for other oneworld carriers flying out of PHL. Qatar Airways, I imagine, is paying BA to use its lounge during the morning period when QR728 departs (all the BA + codeshare flights depart in the evening). The counter staff who scanned my boarding pass was wearing the Qatar uniform.

I’m not sure how much of this is because Qatar isn’t paying BA enough and how much is the Curse of the Cruz™, but this lounge was dismal.

There’s certainly enough space to sit, given that Qatar’s A350 only has 36 business class passengers at most and this flight was about half full. I lamented the lack of any “real” chairs (as I grow older I find the benefits of lumbar support to far outweigh the aesthetics of chairs that look nice but make your arm go numb after a while) but otherwise, space is more than adequate. 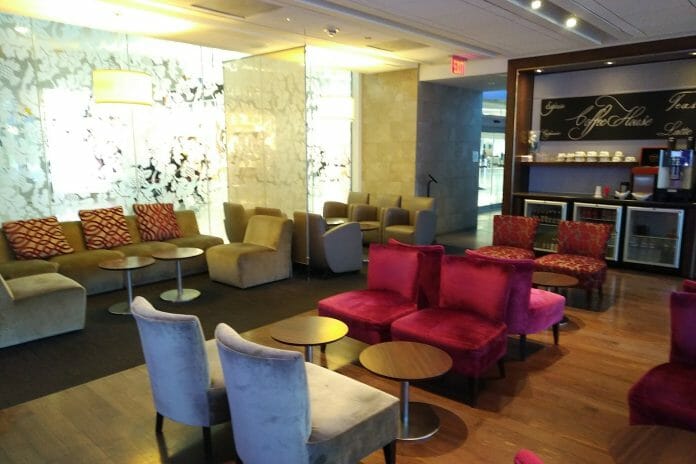 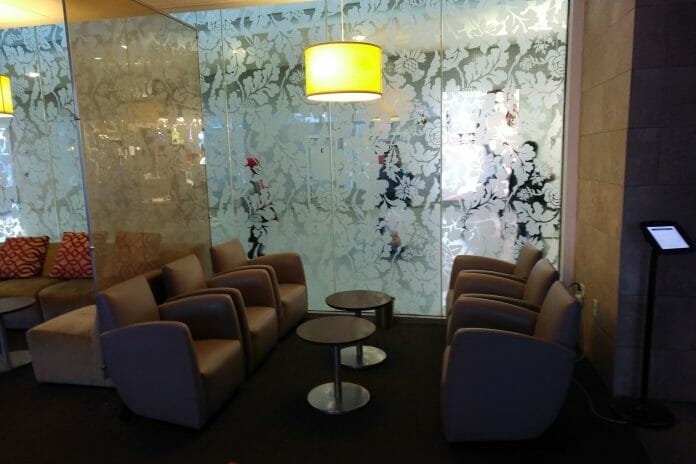 There’s even a separate cordoned-off dine on demand area. A sign posted outside said it opened from 4pm for British Airways customers. It starts and ends with fruit, yogurt, cold cuts, cheese and cereal. Oh, there was also a secondary counter with hard liquor and some bread items. A solitary pot at the end of this counter held a vague promise of some hot food, but upon closer inspection turned out to be an empty void. 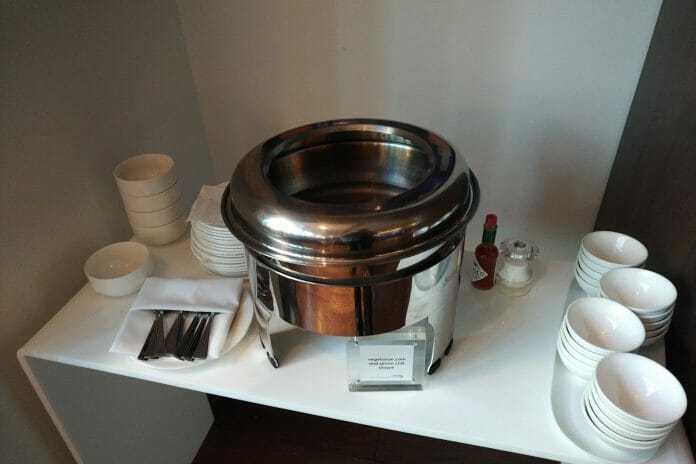 I thought it was ridiculous that there was not a single hot option available for passengers in this lounge. Again, I don’t know what BA’s set up is when the lounge actually caters for their passengers in the evening, but regardless this is something Qatar needs to sort out with BA, and fast.

Boarding couldn’t come soon enough and mercifully, it was soon time to head to the gate.

I think also BA must be the only airline that charges for seat selection in business class?

maybe it is! some western bloggers have remarked that asians have a bias against cold things (drinks etc) and as such will overheat the cabin and serve the champagne to owarm.

I agree. Avoid BA. At least until they’ve rolled out their new biz class, which will be quite some time. I’m sure you’ve read Lucky’s opinion on BA J class. I flew with them before I read OMAAT and I had the exact same opinion. I did not like the seat and that was with me in a forward facing seat, not the backwards one. I also, fortunately, had aisle access and wasn’t stuck in the middle and had to climb over someone else’s legs to get out of my seat. The seats were narrow (with a 2-4-2 layout, they’d… Read more »

on my recent RTW trip I deliberately flew out of JFK instead of BOS just to avoid having to fly BA (and it turned out to be a great decision because I got to experience AA’s excellent flagship lounge in JFK + their superior business class product). I simply do not understand how BA can consider a 2-4-2 J product to be anywhere near adequate. BA, to me, is surviving purely on location. they control most of the landing slots at one of the most important airports in the world. people may hate the product, but they’re able to get… Read more »

We flew Turkish Airways business class from Rome to Singapore via Istanbul. At Rome, we were invited to use the British Airways lounge (I guess Turkish didn’t have their own lounge), and the experience was comparable, if not worse, than what you described above. The mineral water had run out and nobody thought of replenishing it the entire duration of our stay (>1 hour).

I visited the BA lounge in Heathrow as well. not sure what I was expecting, but the thing i remember most is that the air conditioning wasn’t working and there was nowhere to sit.

I fully agree BA lounhe at Philadelphia is a very bad experience. I don’t know how you manage to take picture of empty seats as it was full booked when I stopped by. Here is my experience. I have now adopted the refurbished AA which is superb! Very bad experience at British airways lounge today at Philadelphia airport! service at the entrance very condescending and antipathic.! !perhaps I am not blond enough for the blonde hostess. Very tiny lounge, very tight choice of food, for a reason I ignore and I cant’ get properly explained by the staff I have… Read more »