If you’re in the miles and points game, it’s quite likely that you may have more than one credit card from a given bank.

For example, I may use the UOB Preferred Platinum Visa to earn 10X on payWave transactions, and the UOB Visa Signature to earn 10X on foreign currency spending. When the time comes to convert my UNI$ into miles, I only need to pay one conversion fee because UOB pools my credit card points. That’s to say, whatever points I earn go into a central pool, and points are taken from that pool.

Contrast this to Citibank, which does not pool credit card points. If I hold a Citi Prestige and a Citi Rewards Visa, my ThankYou points need to be redeemed separately, and I’ll pay as many conversion fees as I have cards. 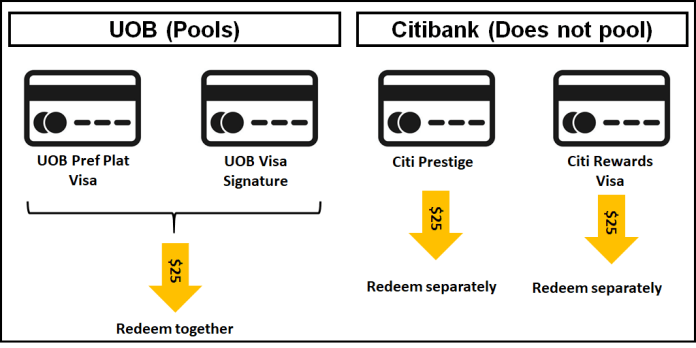 Points pooling also matters when it comes to cancelling cards. Since Citibank points do not pool, I’ll need to cash out all my points on a given card before I cancel it, or otherwise forfeit them. Since UOB points pool, cancelling a given card has no impact on my total points balance, assuming it’s not my last points-earning card with the bank.

All things equal, it’s much better to earn points with a bank that pools. So which do, and which don’t?

Here’s a high-level summary of which banks do and don’t pool points.

There is some nuance to this, so be sure to read the details below. 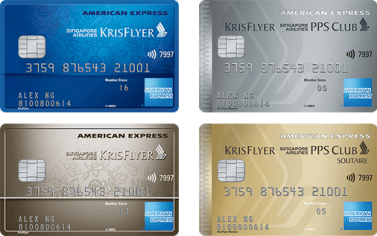 Pooling is irrelevant for the KrisFlyer cobrand cards, because miles are automatically credited to the linked KrisFlyer account and you can’t concurrently hold more than one cobrand card anyway.

Points on the Membership Rewards-earning cards do pool, but it’s slightly complicated.

First of all, recall that AMEX Platinum Charge cardholders can convert Membership Rewards points to miles at a 400:250 ratio, compared to 450:250 for other AMEX cardholders. 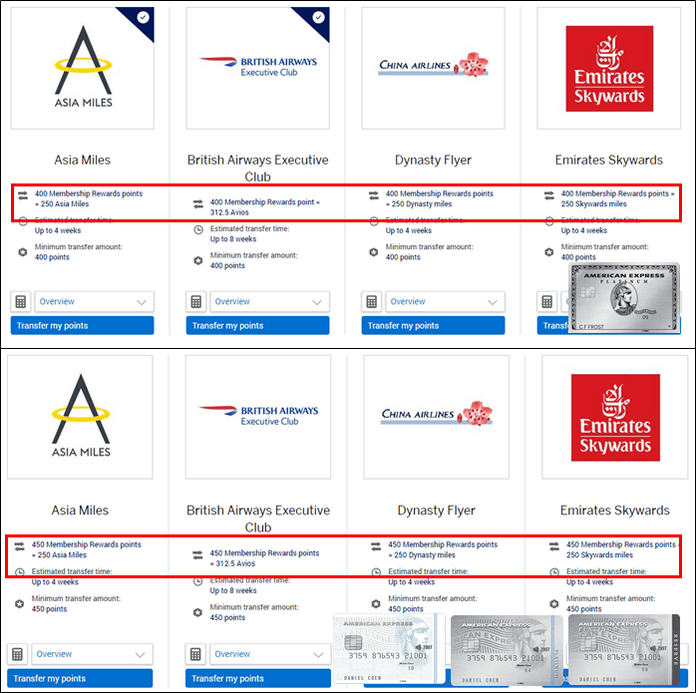 (1) Some people will see their points pooled automatically on the back end, all convertible at the more advantageous 400:250 rate. If you’re in this situation, the drop down menu for “Your Points Account” will look like this. 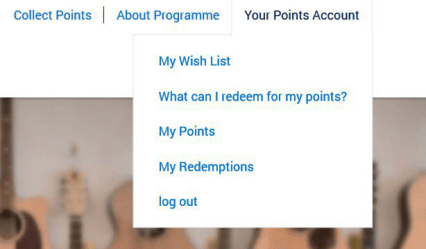 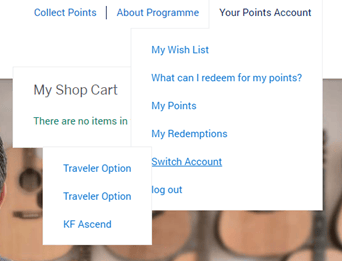 In this case, you can call up customer service to get your points manually combined and transferred at the preferable 400:250 rate. I don’t know why some people have separate accounts, and others have a single one, but either way you’ll get the 400:250 rate if you hold an AMEX Platinum Charge. 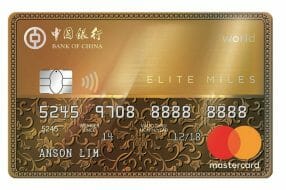 Although Bank of China only has one miles card on offer, you may still end up paying multiple conversion fees.

It’s a silly rule and very arbitrary, but it is what it is.

DBS is slightly confusing, because points are kept separate on the back end but pooled together at the point of redemption.

Although each card’s individual balance is less than 5,000, I’m still able to redeem a block of 5,000 DBS Points because the points are pooled together for redemption. The system will prompt me to select a credit card number to “deduct” the points from, but it doesn’t matter which card I pick. 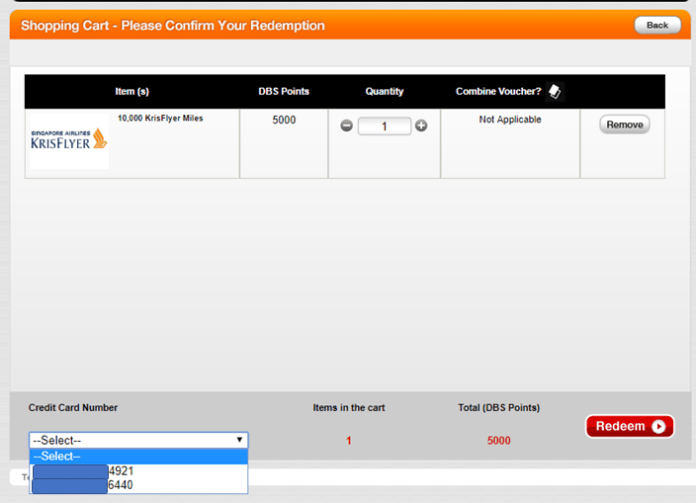 When redeeming points, the DBS system will deduct those with the earliest expiry first– since DBS WWMC points expire after one year and DBS Altitude/Treasures AMEX/Insignia points never expire, the former will always be redeemed before the latter.

Although DBS will only charge you one fee per conversion, the fact that DBS keeps points separate on the back end means that cancelling a given card results in forfeiture of all points on that card. So cash them out before you cancel!

OCBC$ earned through cards like the OCBC Titanium Rewards (both Blue and Pink) and the OCBC Visa Infinite will be pooled together. However, the OCBC VOYAGE earns a different points currency, VOYAGE Miles, which cannot be pooled with OCBC$. VOYAGE Miles work very differently from OCBC$ anyway, so it wouldn’t be logically possible to pool them.

Likewise, the Travel$ earned by the OCBC 90N do not pool with any other OCBC currencies. 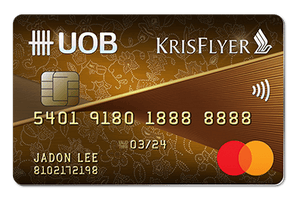 Points pool across all UOB cards, with the exception of the KrisFlyer UOB Credit Card. This is a cobrand card, so miles earned are deposited directly into your KrisFlyer account (just watch out for the delayed crediting).

It’s very customer-unfriendly not to pool points, but my guess is that banks which don’t allow it aren’t doing so deliberately. More likely than not, it’s a hangover from an outdated IT system where points were kept in silos, which no one dares to touch.

Not pooling points is a black mark, but it’s not necessarily a dealbreaker. I’d argue that it’s still worth earning Citi points, for example, thanks to the sheer variety of transfer partners.

Similarly, it’d be silly to pass up on the X Card’s 100,000 miles sign up bonus (assuming you got it while you still could) just because it wouldn’t pool with your Rewards+ card (but why on earth would you hold one in the first place?)

Aaron Wong
Aaron founded The Milelion with the intention of helping people travel better for less and impressing chiobu. He was 50% successful.
Previous articleReview: Pier One Sydney Harbour, an Autograph Collection Hotel
Next articleReview: Singapore Airlines A380-800 Suites Sydney to Singapore

do points earned from supplementary cards of these banks count and pool to the main card?

It’s any spending isn’t it? Not just local spending.

Aaron Wong
Author
Reply to  No miles for me

You describe the nuances of these banks and their respective cards well. Thank you!

Just a minor point, I don’t think you will lose all the uni$ with uob even after you cancel your last mile earning card. The balance will still be the same after you next reapply another uob miles earning card. I had an experience where I had a negative balance (long story) and it was there even after I cancelled all my cards.

How did you manage to get negative points? Is it a corner case or something people can easily fall into?

Interesting! But if you close all your card accounts, you’re saying they still have a “memory” of you?

yup, i charged hospitalisation bill and got uni$ and then redeemed it. then the insurance refunded the money and they had to deduct the points. i then cancelled all my cards in boycott but when i reapplied in future, the “debt” is still there. apparently the memory is for life.

But don’t UNI$s have an expiry? Surely they won’t show up if they have expired. Maybe this only applies to negative balances. A rather confusing issue, if UOB deducts my UNI$s for annual “fee”, and wouldn’t waive it, and I cancel my card, but my UNI$s were to expire in March 2020, would they refund the UNI$s – and with what expiry date? (Assuming I have another card)

No miles for me
Reply to  Mileshedgehog

Mileshedgehog
Reply to  No miles for me

It seems then it’s not possible to transfer UNI$ from a cancelled account to an active one. But the article above says “Since UOB points pool, cancelling a given card has no impact on my total points balance, assuming it’s not my last points-earning card with the bank.”? So who’s correct 😱

But wouldn’t u then have a credit balance on your card and subsequently when u spend using that u would have earned back the equivalent uni$ back and bring things back to status quo?
Or (gasp!) did u forfeit the credit when u cancelled the cards?

Does it mean that if I have both the pink and blue titanium cards and I cancel one, the points of the cancelled one will not be forfeited?

What about for scb vi and x vi?
You wrote the points from these 2 cards are pooled for redemption but technically they are still kept in separate pools and cancelling one will mean a forfeiture of the points?

yes, so long as you have one ocbc$ earning card, you will retain the points from both cards

for scb vi and scb x, cancelling one will lead to forefeiture of points. points are only pooled for the purposes of redemption.

Thanks for the reply Aaron!
Especially on a topic u wrote a year ago

It’s only confusing because each bank has its own system, I actually find the dbs/scb more logical though uob/ocbc is certainly more friendly