SIA will retire 7 A380s and 8 B777s- What cabin products can you expect when flying resumes?

SIA will be trimming its fleet on the back of a S$3.5 billion loss, and it's goodbye for some aircraft types.

Singapore Airlines announced its first half financial performance for FY2020/21 yesterday, and like the previous quarter, it’s pretty grim. 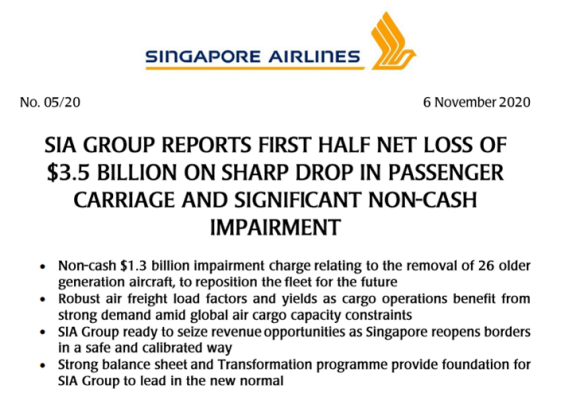 All in all, the SIA Group recorded a S$3.5 billion net loss, thanks to virtually non-existent demand for air travel, and impairment charges on older generation aircraft. A further S$563 million was lost on fuel hedging (where have we heard that before?), and the airline will now seek to raise an additional S$6.2 billion through the issuance of mandatory convertible bonds.

There’s no doubt plenty of financial analysis out there already, so what I’d like to do is take a closer look at the fleet development plan, and the implications this has on the cabin products we can expect to see in the future.

Singapore Airlines has recognized an impairment loss of S$1.3 billion on the carrying values of 26 older generation aircraft, deemed surplus to fleet requirements. This includes:

There’s no real surprise to see the B777s go. Some of these aircraft were already pushing 20 years, veritable geriatrics in a fleet with an average age of around 7 years. To give you an idea of their vintage, 9V-SVE (a B777-200ER) started flying two months after 9/11!

Likewise, we also know that SilkAir had long planned to transition to an all-Boeing fleet, and the retirements of the A319s/A320s are another step in that process (one wonders how connectivity to Koh Samui will be maintained with no more A319s though).

And of course, no one can say they didn’t see the early demise of the A380 coming…

Seven A380s are headed for retirement

Singapore Airlines has not announced which specific A380 airframes will be retired, but it’s almost certain they’ll be the oldest ones with the last generation cabin products.

There’s simply no scenario in which retiring the newest ones makes sense. Aviation analyst Brendan Sobie said as much in a Today Online commentary last week:

For A380s that are only a few years old or have recently been retrofitted with new cabin products, an airline is better off operating the aircraft at a loss than trying to phase them out given the huge financial hit associated with the latter scenario.

Scrapping A380s that are several years old and have not been retrofitted also requires a huge impairment charge as the value of the aircraft has to be written down to reflect current market conditions, but this is manageable and a better option than trying to return the aircraft to service.

SIA has to keep a minimum of nine of its 19 A380s as the impairment charge for these nine would be way too excessive to consider a phaseout.

For the uninitiated, Singapore Airlines’ A380s can be split into four varieties:

It therefore looks like we’ll see SKF, SKG, SKH, SKI, SKJ and SKK retired, with the 7th one coming from SKL, SKM, SKP, SKQ, or SKR.

This also means that Singapore Airlines will never finish its A380 refit project, which always seemed like a long shot. In November 2017, SIA announced its plans to refit all 14 of its existing A380s with the 2017 cabin products, a process that was supposed to start in late 2018 and finish in 2020.

The rate of refit has been positively glacial, and it’s doubtful the project would have been completed even if COVID-19 never happened.

Sobie believes it’s likely that one or two more A380s will be retrofitted, as it’s too late to cancel the retrofit kits. This means we could see just one or two A380s with the old cabin products in the years to come, and who knows- those may be headed for the boneyard too before all this is over.

The B777-300 primarily operated short and medium haul flights where First Class was deemed a necessity, such as Brunei, Jakarta and Manila.

It also means that until the next-generation B777-9s join the fleet, SIA will only offer a First Class product on  two aircraft types- the A380-800 and B777-300ER. And since the former is likely to be grounded until at least the end of 2021, expect slim pickings for First Class award seats next year, if at all.

While I have a certain soft spot for the 2006 First Class seat, I can’t say the same about the 2009 Regional Business Class, which will officially depart the fleet with the retirement of the B777-200/300s.

You get the sense that SIA didn’t invest a whole lot of heart into developing this seat- in a departure from their usual obsessive approach to innovation, they purchased the exciting-sounding Weber 7811 pretty much off-the-rack.

But that’s perhaps understandable too, because the A330s this seat debuted on were only ever intended to be a stopgap solution, leased to plug gaps in regional capacity until the A350s and B787s came online. The remaining A330s are set to be returned to the lessor by the end of this financial year, and with the B777-200/300s also retiring, the 2009 Regional Business Class seat will be history.

If you really miss it, however, take heart. Some of SIA’s old A330s have found their way to charter company Hi Fly, which has dolled them up with fancy lighting and props (even bedding!) in a glossy marketing brochure. Mediocrity never looked this good. 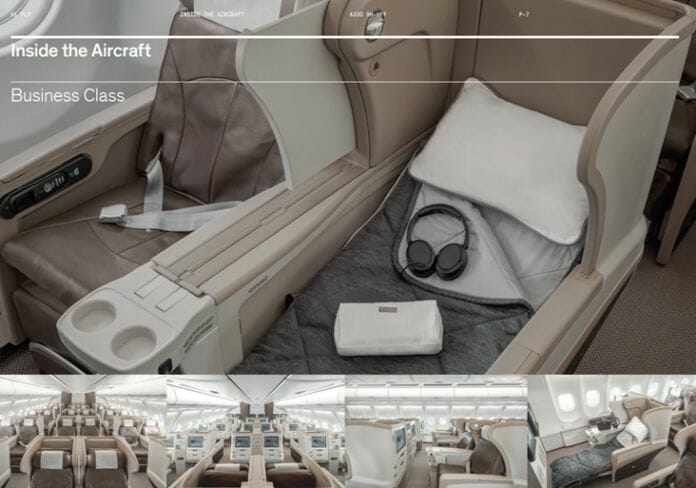 What cabin products can we expect going forward?

With those aircraft retirements accounted for, here’s what the SIA fleet will look like:

This doesn’t take into account aircraft yet to be delivered, with the following orders still pending:

What we don’t know right now is how the new cabin products for the B777-9 and B737 Max 8 will look like. SIA will be introducing a brand new First and Business Class on the B777-9, but with production delays, it’s unlikely we’ll see this before 2023. Where the B737 Max 8 is concerned, we know that Thompson Aero has been chosen as the seat manufacturer, but not the final form the product will take.

Singapore Airlines’ latest results look grim, and as of today, they’re operating more cargo planes (7 freighters + 33 converted passenger aircraft) than passenger ones (39). 114 aircraft are parked at Changi, with a further 29 at Alice Springs.

That’s a sobering thought, although the network continues to expand slowly, and passenger services to Brunei, Dhaka, Fukuoka, Johannesburg, Kathmandu, Male and Penang are to be added in the coming months. Service to New York JFK will be resumed on 9 November, and with the upcoming Hong Kong travel bubble, there’s hopefully some light at the end of the tunnel.

Moreover, it’s clear that Singaporeans still have great affinity for SIA- witness the rate at which Restaurant A380 and Inside Singapore Airlines sold out. I don’t think there’d be too much popular opposition should another bailout be needed, and in any case the government has made it clear that SIA will survive at all costs.

There’s very little that can be done until a COVID-19 vaccine is found, or until strenuous testing regimes are introduced that allow international travel to open up in a meaningful way.

Until then, it’s all about survival.

first 737-800 has already been repainted in sia livery, but will enter service with the old cabin products. all new 737 max 8s should come with new cabin products factory installed

Really the only option for Koh Samui will be Bangkok Airways

They’d need to optimise their schedules, would make sense to overnight at Changi so they hit the main departure/arrival banks from Europe and Aus

Of course if its a codeshare then we lose the ability to redeem KF miles which is a big shame, even economy this can be a good use vs the sky high revenue fares.

indeed- that’s what i’m primarily concerned about. bangkok airways loves to gouge on this route, and they have a stranglehold on the samui airport. the alternative would be to earn etihad guest miles via citi and redeem for bangkok airways, quite a reasonable 7.5k/10k for y/j

Gonna miss the 2006J. Really it was revolutionary for its time and till today it’s one of the best for sleeping no matter what others say and complain and compare to new J seats.

With only 3 planes left options will be limited.

2006 J became 2013 J on the 77Ws which for me is superior and nothing much has changed. The long haul 359s are also using the same seats so there’s nothing lost there. The 2009 regional J is indeed SQ’s worst.

yes, 2006J was game changing, better than what many other airlines had in first class at the time. in fact, people were saying it was too wide even. but as jw19 pointed out, 2013j is a moderate evolution on the 2006j, and you hardly lose anything on the upgrade. 2006J seats on the a380s are way too old now

In the good ol’ days, SQ’s FRA-JFK in R or J was probably the best option for crossing the Atlantic (along with AF LaPremiere or LH/LX F). As much as I loved the A380, I fear we will not see it again in FRA as it is not “flagship” route. I do hope they still keep the FRA-JFK link in the future, even with an A350, as it did enjoy some popularity with leisure and business-minded travelers in Germany. However, I am not sanguine that this will be the case.

I’m just glad that First Class is returning soon instead of total doom. 🙁

I wouldn’t be so sure about that, actually. I don’t think it will make sense for SQ to bring back its 77Ws in the near term, when the more fuel efficient a350s can handle the long haul flights (goes without saying the a380s will come back even later than the 77ws).