Two days ago, the Life section carried a branded content piece paid for by VIP Pass, which you might recall was the subject of a recent Milelion article. This was quickly removed (some Redditors have screenshots of the original) after it was pointed out that certain claims warranted further investigation.

But just for general amusement and the sake of posterity, let’s run through the magnum opus that is “How to enjoy up to 80 per cent off your next luxury staycation”, brought to you by VIP Pass. 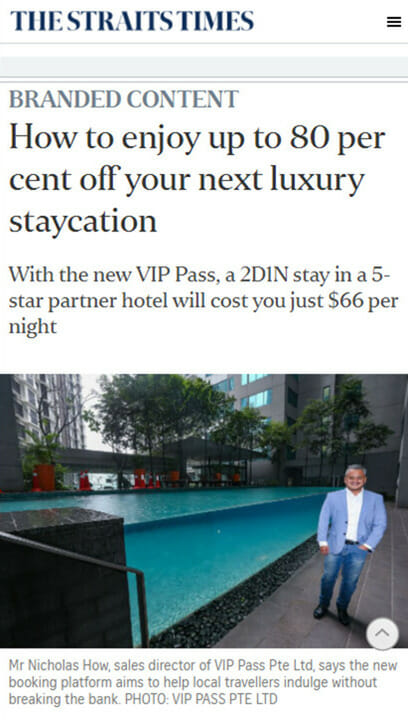 With the new VIP Pass, a 2D1N stay in a 5-star partner hotel will cost you just $66 per night

And…pause, because we’re already off to a bad start. A VIP Pass retails at S$399 for six nights, which yields a per night cost of S$66. But read the fine print, and you’ll discover that nights 4-6 each have a S$50 cleaning fee attached to them.

In other words, you’ll pay at least S$549 if you want to fully utilize your VIP Pass, which works out to ~S$92 per night.

But perhaps math is not intended to be a strength of this article.

VIP Pass sales director Nicholas How says the VIP Pass aims to prove that staycations need not be expensive if you make bookings via the right channels.

“We decided to launch this product because we saw that on average, Singaporeans are spending S$200 per night on one room. If a family were to plan a week-long (7D6N) staycation in lieu of a holiday right now, they would be paying close to S$1,800.”

If a family were planning a six night staycation at an average of S$200 per night, they’d be paying S$1,200. If said family were booking two rooms per night, they’d be paying S$2,400. There is no scenario in which you get S$1,800, unless perhaps mummy and daddy damage the bed during a particularly vigorous Monopoly Deal session and have to pay restitution.

He adds: “Using the VIP Pass platform, travellers can get the same hotel stays at 70 to 80 per cent savings from the normal price they would pay. We are able to offer this because we were able to lock in very low rates with our hotel partners across Asia and Australia.

“We take up the hotel rooms that are normally not sold, at a fraction of the cost of the normal rate, and we are then able to give the savings back to our customers.”

This is an interesting claim to examine. VIP Pass says that they can get 70-80% off the normal price because they buy up hotel rooms that normally go unsold.

The idea isn’t new; in fact, there’s a proper term for it: “distressed inventory”. Hotels sometimes offload distressed inventory to opaque booking channels like Hotwire. These are called “opaque” because the hotel names are never explicitly advertised; in fact you only learn the name after you book (this helps preserve the brand image of the hotel).

If you’re confused about how that works, let’s look at an example. Suppose I want a last minute staycation this weekend. Hotwire tells me that for US$125++ (~S$198 nett), I can book a 5-Star hotel in the Beach Road area.

They won’t tell me which one exactly until after I make a (non-refundable) payment, but I already know it’s One Farrer. Hotwire sometimes shows you an actual photo of a room in the hotel, and it’s not hard to do a reverse image search to find out where it comes from. 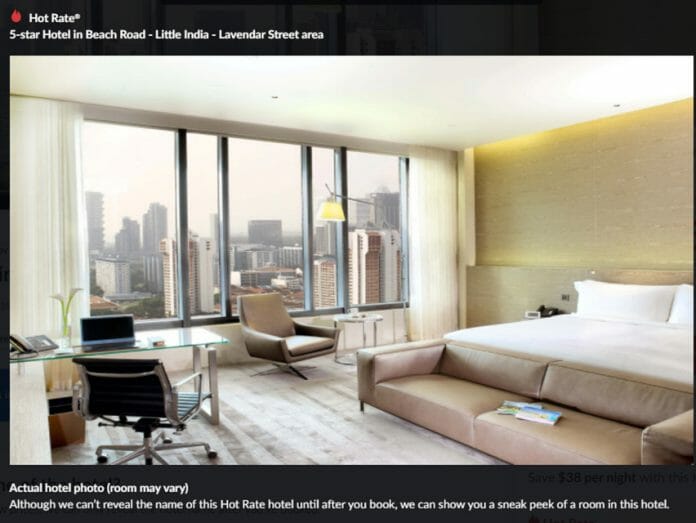 I’ll give you another example, this time from Priceline’s Express Deals feature. Here’s a S$168++ (S$198 nett) deal for an unnamed 5-Star hotel in the Orchard Road area. 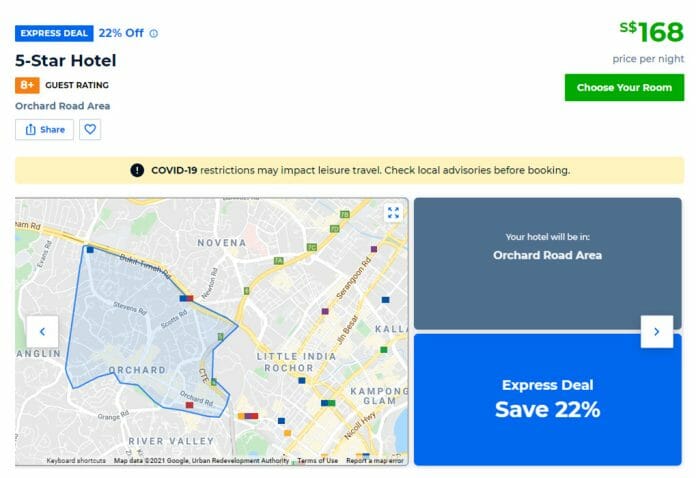 I can deduce this hotel must be Hilton, based on the information provided and the “important info” section. Google the text string “Children under 16 years old will be charged SGD 70 per child per night with extra bed included” and you’ll only find listings for Hilton. 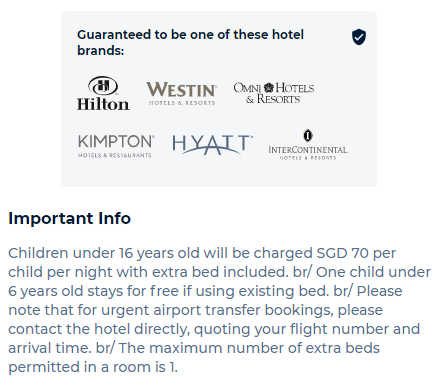 This should give you an idea of the range of discounts 5-Star hotels offer on distressed inventory. While you may occasionally even find a 40%-45% discount in some exceptional circumstances, I can tell you that 70-80% discounts for 5-Star hotels aren’t realistic.

My hypothesis is that figure, if genuine, is derived from comparisons with rack rates (which no one really pays).

Since its launch in Malaysia last year, the VIP Pass has seen good take-up rates among travellers, with almost 13,773 room bookings in Malaysia and Singapore. “The feedback we are getting is that guests are buying the VIP Pass as it is really value-for-money, and they would be utilising it for their next family vacations,” notes Mr How.

There are currently 20,659 pass holders across Malaysia and Singapore, and more than half have already made bookings for their hotel stays. “We even have repeat purchasers who are now on their fifth VIP Pass”, he adds.

It seems these figures have been furnished as a sort of social proof. But it is unclear how many of these 13,773 room bookings have been in Singapore, much less at unaffiliated 5-Star hotels.

You see, the VIP Pass started out as the SubHome VIP Pass/SubHome Home Suite Pass. SubHome manages a dozen or so serviced apartments in Malaysia, and pass holders could book rooms within this network. 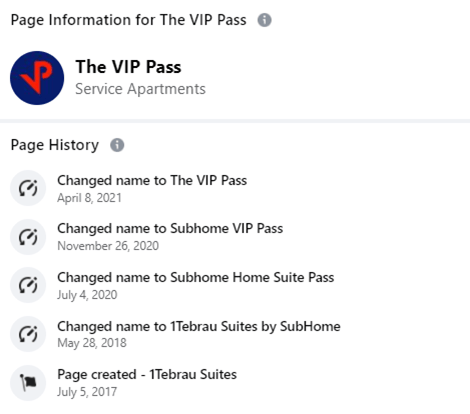 That’s why the bulk of reviews featured on the VIP Pass website and the posts by influencers in Malaysia appear to be properties within the SubHomes portfolio, like Robertson Premier Suites, Alia Premier Medini, Summer Suites Residences etc. 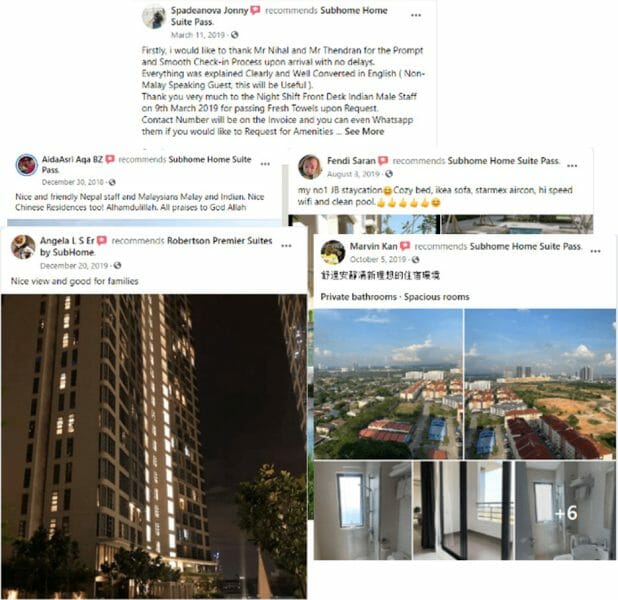 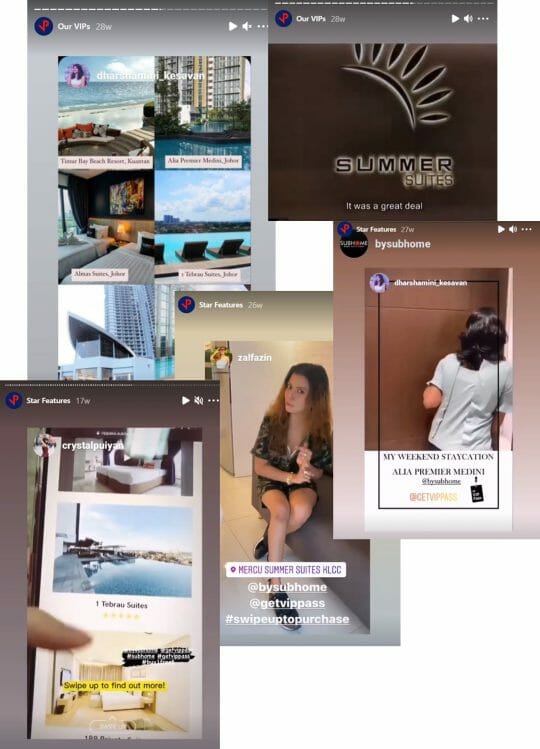 So I can’t understand the relevance these 13,773 room bookings have to whether or not you should buy the VIP Pass in Singapore. I’m sure there’d be no issues securing rooms at your own properties (or maybe not), but what about unaffiliated 5-Star hotels, the supposed big draw of the VIP Pass?

With the VIP Pass priced at a promotional rate of $399 (usual price: $600), travellers can redeem a 7D6N stay across any of the local partner hotels… 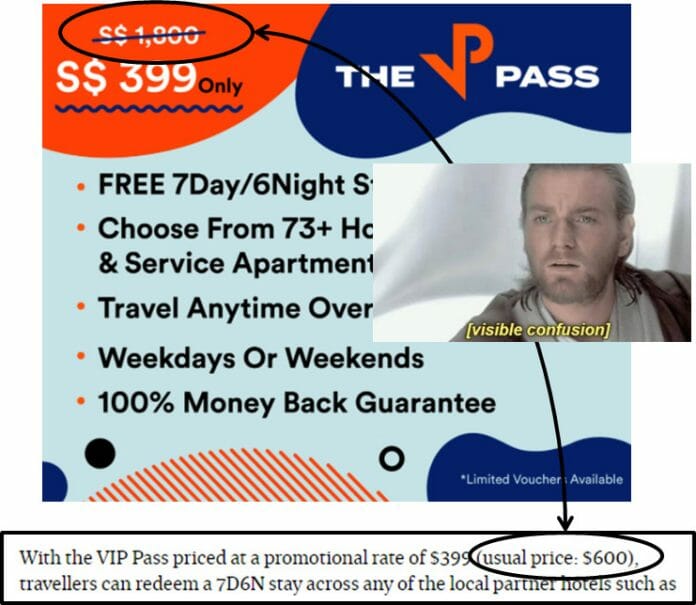 Look elsewhere and you’ll even find figures like S$2,093. 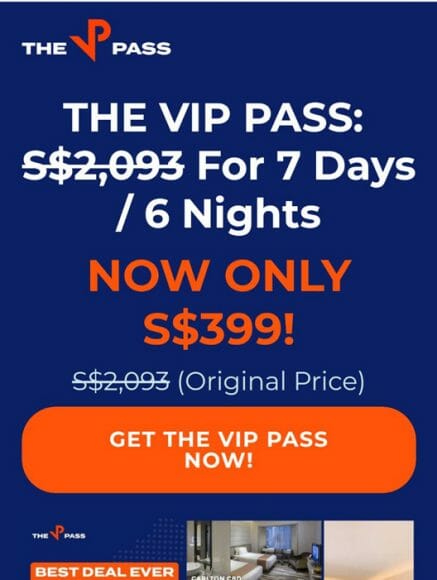 Seriously, pick a number and stick with it.

…such as Carlton Hotel Singapore, Orchard Hotel, The Ascott and Ramada by Wyndham Singapore at Zhongshan Park. Travellers have the option of utilising their pass at one hotel for the entire duration of 7D6N, or dividing it into separate, shorter staycations.

As mentioned in my original post, Carlton and Ascott have stated that they do not work with VIP Pass. So too did Pan Pacific Hotels Group, Hilton and Goodwood Park. That hasn’t stopped VIP Pass from plastering their logos all over its website, however.

Speaking of logos, advertisements by VIP Pass even list some hotels that aren’t actually available on its booking portal, like Grand Hyatt. 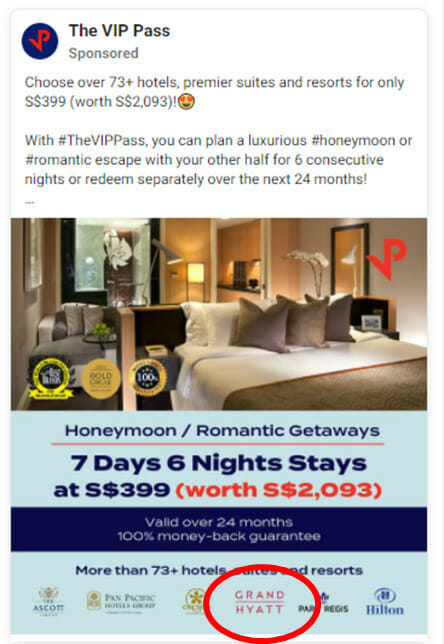 The validity of bookings is for 24 months from the time of purchase, and if no bookings are made during that period, there is a money-back guarantee.

While the 24 months money-back guarantee is mentioned repeatedly, what is unclear is the type of VIP Passes this applies to. I mention this because the T&Cs add this qualifier, as shown below.

Without further clarification, it’s impossible to know which VIP Passes will be eligible and which will not.

Encouraging travellers to see the benefits of the VIP Pass, Mr How says: “Consider viewing travel through the eyes of a long-term value investor. Why would you want to spend extra on another booking platform when you can book a 4- or 5-star hotel stay right now for half the price or even less?”

In a way, it’s apt the article ends with this rhetorical question. Why indeed would you want to spend extra buying a VIP Pass, when it’s possible to get great deals on hotels elsewhere?

I’m thinking of the recent sales we’ve seen with Traveloka and Trip.com, where people snagged fantastic deals thanks to coupon spam and SRV.

I could go on and on, but you get my point. You don’t need to spend S$549 on a VIP Pass to enjoy great hotel deals; they’re everywhere now.

VIP Pass is still running ads at full steam on Facebook, although I have noticed people posting links to the Milelion article in the comments (which get quickly deleted).

tl;dr: If you book the VIP Pass expecting to enjoy six luxury hotel nights for S$399, you’re likely to be disappointed. Save your money, and look elsewhere for staycation deals.

Brilliant analysis and love your humor as always

Distressed inventory, or what more ppl know as Priceline, is something that only exists in major US cities.

I came here expecting to understand what had triggered Straits Times to pull that article… that would’ve been a good read!

Hi.. Was about to pay for the vip pass when I thought it looked a little dubious… I took variations of the company name stated on its website to do ACRA searches but no such company existed… I’m still still sceptical that this is a real company…

I found the details on acra- refer to this post for more: https://milelion.com/2021/06/22/investigating-the-vip-pass-a-hotel-deal-you-should-avoid/

SPH has never sacrificed its editorial integrity to advertisers. NEVER!

John Oliver covered this in his Sponsored Content (https://www.youtube.com/watch?v=sIi_QS1tdFM) rant. Speaks volumes that Straits Times does the same with zero verification of the claims.

They need money for lawsuits hence the agrresive nature of ads. Stick with the big guns or better still the hotel sites themselves, when confronted with a sticky situation, you can’t thank yourself enough.

Now that I think about it, the fraud strategy is simple. There is reason for the $50 cleaning fee for 4th night to 6th night. You pay them $399 upfront and when you realise that you keep getting counter-offered with crap hotels, some will have no choice and just accept it for Night 1-3. By the time you get to Night 4, and all you get offered is Hotel Royal or Hotel 81 plus you have to pay $50 extra, many will just forget it and walk away altogether…

Awesome read, thanks for doing this due diligence piece. Love your humor.